Presented by Brooklyn Public Library and the Cultural Services of the French Embassy, the Free, 12-Hour, Overnight Event to Feature Music, Rare Films, VR, and More than 50 Speakers and Performers 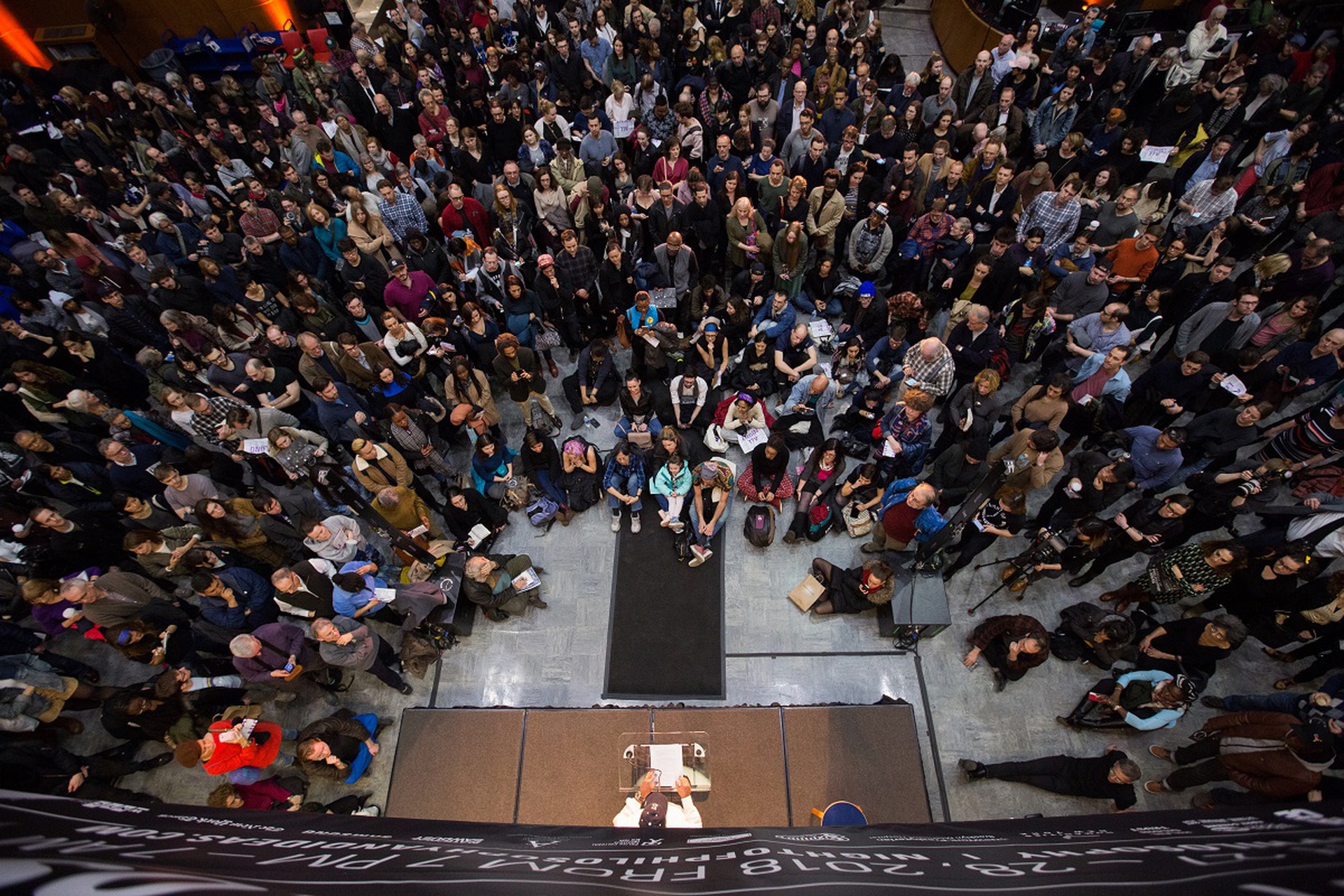 Presented by Brooklyn Public Library and the Cultural Services of the French Embassy, the Free, 12-Hour, Overnight Event to Feature Music, Rare Films, VR, and More than 50 Speakers and Performers

Throughout the all-night event bringing together the New York community with philosophers, authors, artists, and musicians from around the world participants can engage in a series of thought-provoking conversations and performances from 7 p.m. on Saturday, February 1 to 7 a.m. on Sunday, February 2, 2020, at the historic Central Library at Grand Army Plaza.

As the concept of the Institut français’ global La Nuit des idées continues to expand, with editions taking place in more than 120 cities around the world in 2020, the Brooklyn event, created in 2017, is one of the two editions in the country to run overnight from sundown to sunrise. The editions being mounted this year in Norfolk, Miami, Chicago, San Francisco, Boston, and Los Angeles are modeled after the event created by the Cultural Services of the French Embassy in 2015.

Featuring more than 50 philosophers, intellectuals, researchers, and artists, the 2020 edition at BPL will explore the overarching theme “To Live,” with speakers challenging humanity’s relationship to the world, nature, other living beings and species, and technology. The 2019 Nobel Prize-winning French-American economist Esther Duflo will deliver the night’s keynote address.

The evening will also feature the Dilemma Series in which philosophers will lead open discussions with attendees about modern-day concerns ranging from gentrification to sexual harassment. Participants can examine pressing issues in contemporary society in simultaneous conversations, performances, screenings, and VR experiences.

“A Night of Philosophy and Ideas has quickly become the most exciting all-nighter in our beloved city," said Linda E. Johnson, Brooklyn Public Library President and CEO. "There is no better place to listen, learn and debate than the Library. We are proud to partner with the Cultural Services of the French Embassy to host thousands of curious and engaged New Yorkers until dawn."

“When the French Embassy first brought A Night of Philosophy and Ideas to New York City five years ago, it was an instant success. Since then, it has continued to grow, drawing more than 30,000 people to events across the country in 2019,” said Gaëtan Bruel, Cultural Counselor of the French Embassy in the U.S. “This year, we are thrilled to be partnering with cultural and academic institutions in 7 major U.S. cities: Boston, Chicago, Los Angeles, Miami, New York, Norfolk, and San Francisco.”

“Through A Night of Philosophy and Ideas, we are thrilled to provide a platform for speakers and audience members alike to discuss their views on vital civil and artistic issues, reflecting the diversity of thought that is a hallmark of American democracy,” said László Jakab Orsós, BPL’s Vice President of Arts and Culture.

Emmy Award-winning television writer/producer and philosopher Eric Kaplan (Futurama, Malcolm in the Middle, Flight of the Conchords, Big Bang Theory) will lead a discussion on how to come up with your own philosophical questions.

DJ Spooky will lead a panel on philosophy and climate change and give a live performance in the Grand Lobby.

The evening will also include two performances developed specifically for A Night of Philosophy and Ideas by the French theatrical juggler Jérôme Thomas with collaborators Martin Schwietzke and Jörg Müller; and Syrian-born artist Hratch Arbach will present MAWTINI – lost homelands, a performance with fragrances and melting wax throughout the night.

National Sawdust will curate two performances. Singer/songwriter Sonic, who is partially deaf, will collaborate with her collective Womxyn Amplify on an experiential production amplifying the voices of LGBTQIA womxyn and nonbinary artists. In addition, Mwenso and the Shakes, an artist collective turned family, will present an electrifying performance which The New York Times called “intense, prowling, and ebullient.”

Cellist and vocalist Gabriel Royal and Chamber-pop singer/songwriter producer and community builder Taali will also perform during the evening.

Participants will have the opportunity to experience virtual reality artworks and watch innovative films throughout the evening, including Out 1, a 12-and-a-half-hour-long 1971 French film directed by Jacques Rivette exploring the relationship between performance and reality. Attendees can also experience Dreams of Henri Rosseau, a virtual reality work that will be available throughout the evening via VR headsets, allowing participants to immerse themselves in a wild dream peopled by the characters, animals, and plants imagined by self-taught 19th century painter Henri Rousseau.

A full list of events may be found at: https://www.nightofphilosophyandideas.com

For information about events in other cities: http://www.frenchculture.org/

The 2020 A Night of Philosophy and Ideas is co-presented by Brooklyn Public Library and the Cultural Services of the French Embassy. The national program is made possible with major support from Open Society Foundations. Generous support is provided by The Gladys Krieble Delmas Foundation, the Institut français, Sixpoint Brewery, the Wythe Hotel, Air France, FACE Foundation, and event partner National Sawdust. WNYC is the Official Media Partner of the 2020 BPL Presents Season. Additional support is provided by the German Center for Research and Innovation, the Polish Cultural Institute New York, The Earth Institute, the Elizabeth Kostova Foundation and Sofia University, the Istituto Italiano di Cultura, and the University of Bordeaux Montaigne. In-Kind support is provided by Colson Patisserie, Pommery, Albertine, Bogota Latin Bistro, Miti Miti, Emma’s Torch, and EVEN Hotel Brooklyn. Visual identity created by La Rêveuse.