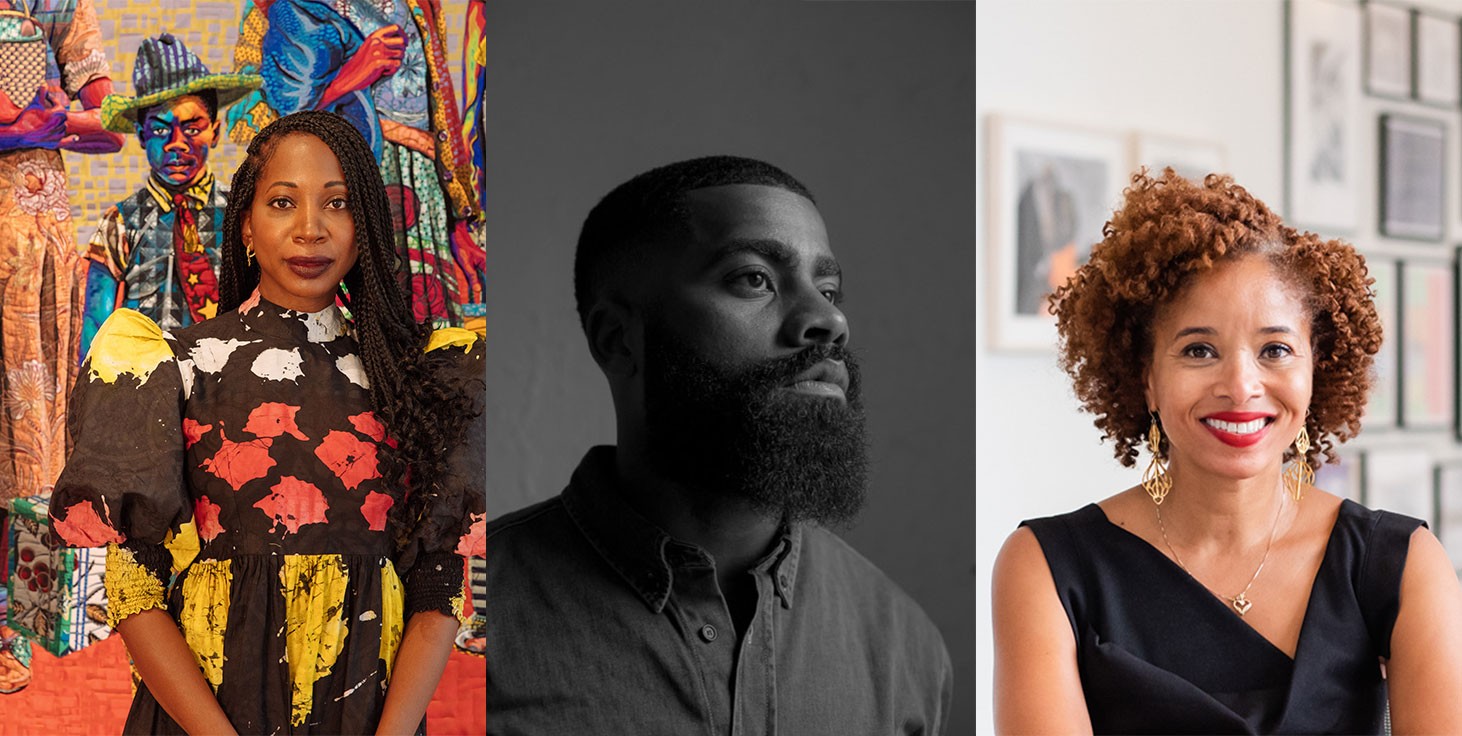 The Gordon Parks Foundation has named its 2022 fellowship recipients: Artists Bisa Butler and Andre D. Wagner, and author and curator Nicole R. Fleetwood as the inaugural Genevieve Young Fellow in Writing. Established in 2017, the fellowship program champions individuals who share the foundation’s devotion to advancing Parks’s vision for social change through the arts and humanities. This year expands on previous art fellowships with the launch of the Genevieve Young Fellowship in Writing, established in honor of the legendary book editor, who was also Gordon Parks’s former wife, estate executor, and instrumental member of the foundation’s board until her passing in 2020. Each recipient will receive $25,000 to support new or ongoing projects that explore themes of representation and social justice.

“We are proud to support the work of Bisa, Andre, and Nicole, who each carry Parks’s legacy forward through work that is innovative, inspirational, and critical at this moment,” said Peter W. Kunhardt, Jr., Executive Director of The Gordon Parks Foundation. “As we welcome the 2022 fellows and recognize their important work, we also reflect on the pioneering contributions of Genevieve Young, whose accomplishments in publishing and unwavering commitment to Gordon Parks’s legacy continue to resonate.”

The Gordon Parks Foundation Fellowship programs provide the same vital support Parks received early in his career to artists and writers following in his footsteps. In 1941, Parks was awarded the Julius Rosenwald Fellowship, which allowed Parks to move to Washington D.C. and apprentice under Roy Stryker at the Farm Security Administration (FSA)—a position that helped set the course for his career. From the 1948 LIFE magazine profile of a Harlem gang leader to powerful photographs of Malcom X and Muhammad Ali, Parks’s documentation of American life and culture continues to resonate today, extending his legacy as an artist, humanitarian, and as one of the most important photographers of the twentieth century.

Genevieve Young Fellowship in Writing
The Genevieve Young Fellowship in Writing supports writers from a variety of fields including art history, journalism, and literature, providing grants to aid in the research, development, and publication of a new project. The fellowship pays tribute to the life and work of Genevieve Young, a legendary editor who was also Gordon Parks’s former wife and estate executor. Young played a role in editing Parks’s first book The Learning Tree (1963), as well as Parks’s own endeavors beyond the lens as a journalist, novelist, poet, and screenwriter. Young was vital in the creation and development of the Foundation from 2006 until her passing in 2020.

The inaugural writing fellow, Nicole R. Fleetwood is a writer, curator, and the James Weldon Johnson Professor of Media, Culture, and Communication at NYU. Fleetwood’s research and writing has focused on representations of Blackness in art, performance, and popular culture. Her recent landmark book and exhibition, Marking Time: Art in the Age of Mass Incarceration (2020), investigates the cultural, personal, and aesthetic significance of incarcerated people’s art. Fleetwood was awarded the prestigious MacArthur Fellow Grant in 2021 and recently contributed an essay to Gordon Parks: The Atmosphere of Crime (2020), published jointly by the Gordon Parks Foundation and Museum of Modern Art.

“I am deeply honored to be the inaugural Genevieve Young Fellow in Writing at the Gordon Parks Foundation, as Gordon Parks has long been an enormous influence on my teaching, curating, and writing,” said Fleetwood. “Working in collaboration with the Foundation, this Fellowship will allow me to explore and gain greater understanding of cross-disciplinary influences of the many artistic forms that Parks was engaged in—from photography to music to fashion to cinema and design.”

2022 art fellow Bisa Butler is a textile artist who creates quilts inspired by photographs—portraits composed entirely of fabrics and textiles in vibrant colors and patterns that reimagine and celebrate Black life. Her interdisciplinary approach, informed by her training as a painter and childhood experiences of sewing with her mother and grandmother, reinvents quilting as an art form and uses it as a vehicle for celebrating and uplifting those who have been marginalized or misrepresented.

“As an artist, I have used quilt-making as a means of revealing essential, often hidden, truths about beauty, strength, and fragility in the human experience—themes that were central to Parks's own work,” said Butler. “I am thrilled to be a Gordon Parks Foundation Fellow and have the opportunity to explore this legacy in depth and how it can be carried forward.”

Butler is joined by photographer Andre D. Wagner, who chronicles the poetic and lyrical nuances of daily life using the city—particularly his own neighborhood and community—as his subjects. His practice follows the tradition of Parks, building on and reconsidering a history of street photography engaged with the American social landscape through the lens of race, class, and cultural identity.

“Since my first encounter with Parks's autobiography in 2010, I've considered myself a student of his work. Over a decade later, I am honored to be awarded this fellowship by the Gordon Parks Foundation, which will provide me with the opportunity and resources to cultivate my own voice as an artist and photographer,” said Wagner.

To date, the Gordon Parks Foundation has awarded 10 fellowships in art. Previous fellows include Nina Chanel Abney and Tyler Mitchell (2020), Guadalupe Rosales and Hank Willis Thomas (2019), Derrick Adams and Deana Lawson (2018), and Devin Allen and Harriet Dedman (2017). The foundation’s initiatives, such as the fellowship and scholarship programs, are made possible by the Gordon Parks Arts and Social Justice Fund. Dedicated to supporting and championing artists and humanitarians whose work embodies the legacy of Gordon Parks, the fund is supported by donations of individuals, corporations, and foundations.

Bisa Butler was born in Orange, New Jersey, the daughter of a college president and a French teacher. She earned her BFA at Howard University (Washington, D.C.) and her MA in arts education at Montclair State University (New Jersey). Trained as a painter, she shifted to textile art during her graduate studies after making a quilt in honor of her grandmother. Butler served for more than 10 years as a high school art teacher in New Jersey. She has participated in group and solo exhibitions across the United States as well as in China, England, Japan, and South Africa. Butler was recently the focus of a solo exhibition that traveled from the Katonah Museum of Art to the Art Institute of Chicago. Her work is in the collections of institutions including the Museum of Fine Arts, Boston; the Nelson-Atkins Museum of  Art; the Kemper Museum of Contemporary Art; the Orlando Museum of Art; the Newark Museum of Art; the Toledo Museum of Art; and the Minneapolis Institute of Art. In February 2021, Butler was awarded a United States Artist Fellowship.

Andre D. Wagner is a photographer living and working in Brooklyn, New York. He has remained committed to photographic processes, developing his own black and white negatives and making silver gelatin prints in his personal darkroom. His photographs have been commissioned by The New Yorker, The New York Times, The Cut, The Wall Street Journal, The Washington Post, Time, and Vogue, among other publications. For the movie Queen & Slim, Wagner photographed the iconic key art and the campaign’s leading images. His photographs have appeared in numerous solo exhibitions and group shows in Los Angeles, New York, and North Carolina. His first monograph, Here for the Ride, was published by Creative Future in 2017. He is currently editing a seven-year-old body of work titled New City, Old Blues.

Nicole R. Fleetwood is the inaugural James Weldon Johnson Professor of Media, Culture, and Communication at New York University and a 2021 MacArthur Fellow. Nicole Fleetwood holds a BPhil (1994) from Miami University and an MA (1998) and PhD (2001) from Stanford University. Her book, Marking Time: Art in the Age of Mass Incarceration (2020), is winner of the National Book Critics Circle Award in Criticism, the John Hope Franklin Publication Prize of the American Studies Association, the Susanne M. Glasscock Humanities Book Prize for Interdisciplinary Scholarship, and both the Charles Rufus Morey Book Award in art history and the Frank Jewett Mather Award in art criticism from the College Art Association. She is also curator of the touring exhibition Marking Time (2020), which debuted at MoMA PS1 in 2020. Her publications include On Racial Icons: Blackness and the Public Imagination (2015) and Troubling Vision: Performance, Visuality, and Blackness (2011). Fleetwood has co-curated exhibitions and programs on art and mass incarceration at the Abroms-Engel Institute for the Visual Arts, the Andrew Freedman Home, Aperture Foundation, Cleveland Public Library, Eastern State Penitentiary, MoMA PS1, Mural Arts Philadelphia, the Zimmerli Art Museum, and Worth Rises.

ABOUT THE GORDON PARKS FOUNDATION
The Gordon Parks Foundation supports and produces artistic and educational initiatives that advance the legacy and vision of Gordon Parks—recognized as the most significant American photographer of the 20th century, as well as a writer, musician, and filmmaker, who used the arts to further “the common search for a better life and a better world.”

Through exhibitions, publications, and public programs organized in collaboration with national and international institutions at its exhibition space in Pleasantville, New York, the Foundation provides access to, and supports understanding of, the work and contributions of Gordon Parks for artists, scholars, students, and the public. Through its year-round educational programming and annual grant-making initiatives, the Foundation champions current and future generations of artists and humanitarians whose work carries on Parks’s legacy.

In a career that spanned more than 50 years, photographer, filmmaker, musician, and author Gordon Parks created an iconic body of work that made him one of the most influential artists of the twentieth century. Beginning in the 1940s, he documented American life and culture with a focus on social justice, race relations, the civil rights movement, and the Black American experience. Born into poverty and segregation in Fort Scott, Kansas, Parks was drawn to photography as a young man. Despite his lack of professional training, he won a Julius Rosenwald Fellowship in 1942; this led to a position with the photography section of the Farm Security Administration (FSA) in Washington, D.C., and later, the Office of War Information (OWI). By the mid-1940s, he was working as a freelance photographer for publications such as Vogue, Glamour, and Ebony. Parks was hired in 1948 as a staff photographer for Life magazine, where he spent more than two decades creating some of his most groundbreaking work. In 1969, he became the first Black American to write and direct a major feature film, The Learning Tree, based on his semi-autobiographical novel. His next directorial endeavor, Shaft (1971), helped define a genre known as Blaxploitation films. Parks continued photographing, publishing, and composing until his death in 2006.