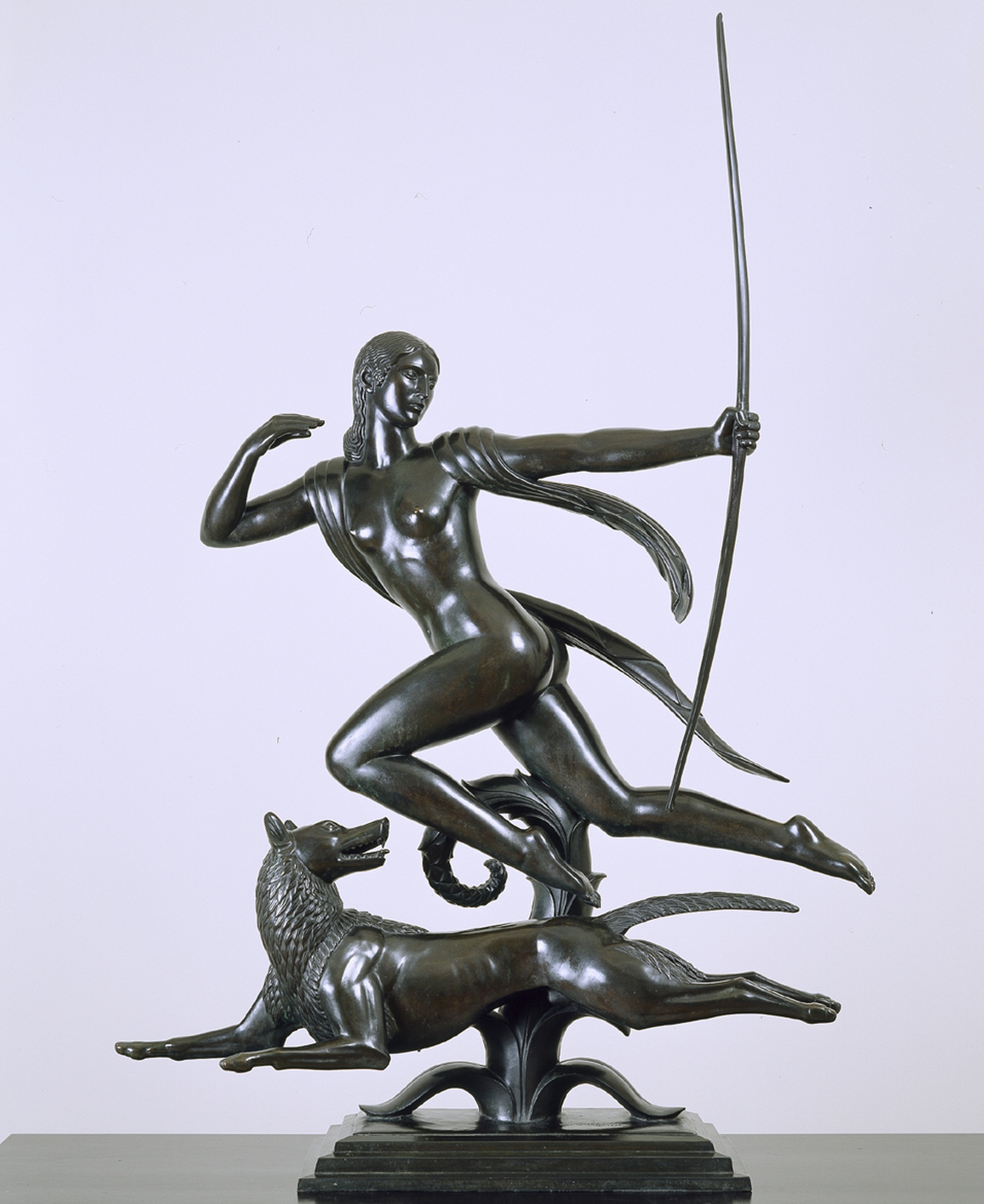 Exploring notions of place in American art throughout its 2018–2019 program, this fall the Addison Gallery of American Art will open From Starfield to MARS: Paul Manship and his Artistic Legacy. The exhibition examines the work and influence of Paul Manship (1885–1966) through two interconnected components: Art Deco at Andover considers the Addison's historic connection with the prominent early 20th-century sculptor Paul Manship, while Starfield through Contemporary Lenses presents the work of four artists-in-residence at the Manship Artists Residency + Studios (MARS) program established this year in Gloucester, Massachusetts.

MARS is being developed as an international, interdisciplinary artists’ residency at Manship’s former summer home and studio, which he dubbed Starfield, to create new works inspired by the artist and his estate. The first class of artists-in-residence were selected by Addison curator Allison N. Kemmerer, and include acclaimed Massachusetts-based photographers Barbara Bosworth, Justin Kimball, S. Billie Mandle, and Abelardo Morell, who bring individual perspectives and aesthetic approaches to interpreting Manship’s estate and archives. These artists will also participate in the Addison’s fall 2018 Edward E. Elson Artist-in-Residence program, collaborating with students and faculty at Phillips Academy and area public schools on projects inspired by the exhibition. From Starfield to MARS: Paul Manship and his Artistic Legacy is on view from September 15, 2018 through January 20, 2019.

The Addison’s connection to Paul Manship can be traced back to its founder Thomas Cochran, who maintained a friendship with Manship and acquired many of his works for the museum’s core collection, including Venus Anadyomene (1927), which greets visitors as they enter the museum. Art Deco at Andover will bring together works by Manship from the Addison collection such as the bronze sculptures Diana (1925), Actaeon (1925), Young Indian Hunter (1926), and Flight of Night (1916), with correspondence, objects, and sketches recently uncovered at Starfield.

“It is an honor to collaborate with the Manship Artists Residency + Studios as they embark on an important initiative to revitalize Paul Manship’s summer home and studio,” said Judith F. Dolkart, the Mary Stripp and R. Crosby Kemper Director of the Addison Gallery of American Art. “Our shared commitment to supporting living artists as well as Manship’s important connection to the founding of the Addison makes this a fitting partnership that will illuminate an important American sculptor.”

“We are thrilled to inaugurate our artists-in-residence program with the debut of this exhibition, which illustrates the endless potential of this important cultural site to inspire creativity,” added Rebecca Reynolds, president at MARS. “As stewards of Paul Manship’s estate, we look forward to breathing new life into this site and reviving its legacy as an artistic hub.”

In 1944, Manship and his wife Isabel bought 15 acres with two quarries in Lanesville on Cape Ann, a village within Gloucester, Massachusetts, approximately 30 miles east of Andover. In doing so, Manship followed a number of prominent American artists—among them John Sloan, Marsden Hartley, and Edward Hopper—who sought out Gloucester for its rocky terrain, picturesque sites, and sea breezes. This summer home and studio became a center for the social life of a burgeoning artist colony, which included such renowned members as: children’s book author and printmaker Virginia Lee Burton; sculptors George Demetrios, Charles Grafly, and Walker Hancock; and painters Gabriel Clements, Ellen Day Hale, and Leon Kroll. Occupied until recently by Manship’s son and daughter-in-law, also artists, the estate was purchased in August 2017 by MARS to save the property from development and to honor the site’s legacy by renovating the facilities and establishing an ongoing residency and studio programs.

The estate still bears the marks of generations of family who lived and worked there, providing an opportunity for the selected photographers to document what was left behind. Offering an illuminating look at an important New England cultural site, Starfield through Contemporary Lenses will debut their photographic explorations in individual galleries dedicated to each artist. For more than a year, Barbara Bosworth, Justin Kimball, S. Billie Mandle, and Abelardo Morell have explored the house, grounds, outbuildings, and archives, making numerous day trips according to their own interests. An overview of their projects follows below.

Barbara Bosworth’s photographs exhibit a deep reverence for the American landscape, imbued with a sense of personal and collective memory, and shed light on the relationship between humans and the natural world. Bosworth’s and Manship’s interests in astronomy provided a point of departure for her series devoted to the sculptor’s estate. Over the course of a year, Bosworth made trips to document the night sky and capture the stars’ movements using a large-format camera and hour-long exposures, resulting in more than 35 velvety blue images that evoke Manship’s fascination with the world beyond the earth’s atmosphere. These photographs are accompanied by close-up images of skies depicted in paintings of New England—many of Cape Ann—from the Addison’s collection, offering another perspective on the site’s unique sense of place.

Bosworth is a professor of photography at the Massachusetts College of Art and Design in Boston. Her work has been widely exhibited, including retrospectives at the Denver Art Museum, the Phoenix Art Museum, and the Peabody Essex Museum in Salem, MA. She has also published extensively, with titles including The Heavens (2018), The Meadow (2015), Natural Histories (2013), Trees: National Champions (2005), and Chasing the Light (2002).

Justin Kimball is known for creating beautiful and stirring images that document the remnants of lives left behind. In his recent series Elegy, Kimball photographed main streets and dilapidated buildings in small towns in Massachusetts, New York, Ohio, and Pennsylvania that have faced economic decline. Inhabitants are pictured in backyards and on porches and street corners, breathing life into these otherwise downtrodden locations. In a previous series, Pieces of String, he visited the homes of the recently deceased, where he photographed ruffled sheets on an unmade bed, an indent in a worn armchair, and phone numbers scrawled on the wall beside a rotary phone. Kimball has continued this exploration inside the Manship home and studio, in a series of color photographs that capture what has been generated, collected, and ultimately left behind by generations of family members. Images of shrouded sculptures and discarded molds, caches of drawings and photographs, well-worn furniture, and bookshelves filled with volumes amassed over decades imply both the passing of time and the lingering presence of lives once lived.

Kimball teaches at Amherst College and is the recipient of several awards and fellowships, including a Guggenheim Foundation Fellowship and an Aaron Siskind Individual Photographer’s Fellowship. He has published three monographs: Where We Find Ourselves (2006), Pieces of String (2012), and Elegy (2016), and his work is held in such collections as the J. Paul Getty Museum, the National Gallery of Art, the George Eastman Museum, San Francisco Museum of Modern Art, and the Museum of Fine Arts, Boston.

S. Billie Mandle’s work lingers on the traces left behind in empty, silent spaces. For previous series, she has photographed the interiors of Catholic confessional booths and Emily Dickinson’s bedroom in her historic Amherst home. Extending her practice of creating meditative photographs through a series of images, Mandle depicts corners and sparse spaces within the Manship home that appear as sculptural abstractions and capture the stillness of a space once filled with life. A second series focuses on Manship’s studio, where the artist’s son John left behind hundreds of his paintings stacked in bins. Photographed in dark, raking, and natural light, the canvases only come into focus upon close observation, provoking questions about what remains and what fades away.

Mandle is on the faculty of Hampshire College in Amherst, MA. She earned a BA in English and biology from Williams College and an MFA from Massachusetts College of Art. She has received a Whiting Fellowship, an Individual Artist Grant from the Brooklyn Arts Council, and an Artist Fellowship in Photography from the New York Foundation for the Arts. Her photographs have been published in Aperture and exhibited widely, including at the Photography Festival in Hyères, France.

Abelardo Morell is best known for employing the camera obscura technique to create seemingly magical optical effects on otherwise ordinary objects. The Addison exhibition marks a departure in Morell’s photographic practice. Titled After Manship, his series pays homage to Manship as the quintessential art deco sculptor, drawing inspiration from that art movement and its formative influences ranging from Arts and Crafts to Bauhaus to Native American aesthetics. To create the seven large-scale works in the exhibition, Morell employed the technique of cliché-verre, painting on sheets of glass with various forms and patterns associated with the art deco aesthetic, layering them on top of each other, and then digitally scanning the plates to create mesmerizing, kaleidoscopic abstractions.

Born in Cuba in 1948, Morell came to New York with his family in 1962. He received a BA from Bowdoin College in 1977 and an MFA from Yale in 1981. From 1983 to 2009, Morell was a professor of photography at Massachusetts College of Art and Design. He received a Guggenheim Fellowship in 1993, the International Center of Photography’s Infinity Award in 2011, and the Lucie Award in 2017. Morell’s work is held in numerous collections, including the Addison, as well as the Art Institute of Chicago, the Fondation Cartier, the Metropolitan Museum of Art, the Victoria & Albert Museum, and the Museum of Modern Art.

Paul Manship (1885–1966) was one of America’s most significant early 20th-century sculptors, recognized both nationally and internationally. Born in St. Paul, Minnesota (as was the Addison’s founder Thomas Cochran), he studied at the Art Students League of New York and the Pennsylvania Academy of the Fine Arts. Upon winning the Prix de Rome in 1909, he spent three formative years in Italy and traveled to Greece to study archaic and classical sculpture. By his return to the United States his work was garnering attention for its careful navigation between abstraction and representation. Manship’s first show in New York at the end of 1912 sold out and from then on his work was in high demand. Today he is best known for public commissions such as the monumental flying figure Prometheus (1934) at New York’s Rockefeller Center and the gates at the Bronx Zoo, as well as for his many individual sculptures, such as Diana and Actaeon (1925), that showcase his streamlined, classically influenced style now known as Art Deco. The Addison Gallery’s renowned collection of American art includes 12 works by Manship, among them the marble fountain Venus Anadyomene in the museum’s rotunda, five major bronzes, and six commemorative medals. In testimony to Manship’s important role in shaping the Addison’s core collection, Phillips Academy commissioned Manship to design the Armillary Sphere (1940) situated in front of the library, and an award medal commemorating former headmaster Claude Fuess.

From Starfield to MARS: Paul Manship and his Artistic Legacy is organized by the Addison Gallery of American Art in collaboration with the Manship Artists Residency + Studios (MARS). Starfield through Contemporary Lenses is curated by Allison N. Kemmerer, Mead Curator of Photography and Curator of Art after 1950. Art Deco at Andover is curated by Susan Faxon, Associate Director and Robert M. Walker, Curator of Art before 1950, Emerita.

From Starfield to MARS: Paul Manship and his Artistic Legacy is made possible through generous support from the Sidney R. Knafel Exhibition Fund and Eric (PA ‘66) and Nanny Almquist. The Addison is also grateful to media partner Boston Magazine for their support of the exhibition.