Vocalists, rappers, dancers, comedians, musicians, spoken word artists, and variety acts to compete for a chance to win a Grand Prize of $20,000 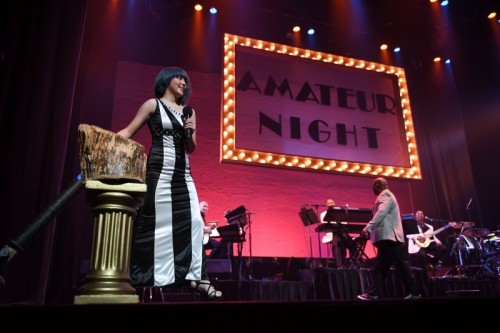 Amateur Night at the Apollo, America’s longest running talent show, returns to the legendary Apollo (253 W. 125th Street) live and in-person on Wednesday, February 16 at 7:30 p.m. EST. Known for its notoriously tough “Be Good or Be Gone” audience who “cheer” or “boo” each contestant, attendees are crucial in determining which participants will go on to compete for the chance to win this year’s champion title and grand prize of $20,000. Since its inception in 1934, Amateur Night has played a major role in the cultivation of artists who have gone on to influence genres across the musical spectrum, win numerous Grammy Awards, and perform to sold-out crowds. Tickets, starting at $25, are on sale now at www.ApolloTheater.org. Harlem residents, employees, business owners, and students can save 50% on tickets through Apollo’s Half off for Harlem program at www.ApolloTheater.org/half-off-for-harlem.

“Amateur Night is one of the reasons why the Apollo has become a world-famous institution. We continue to serve as a launching pad for some of today’s aspiring talent who hail from across the country and the world. For many, performing and winning indicates to the world that they have arrived,” said Apollo Executive Producer Kamilah Forbes. “We are thrilled to come together in person in the historic theater to shine a spotlight on these artists and to once again feel the electrifying energy of the Apollo.”

The Apollo’s original, large-scale talent competition is hosted by comedian and Bronx native Capone (NY Kings of Comedy, Russell Simmons’ Def Comedy Jam) and features staples including C.P. Lacey in the role of the “Executioner” (in charge of ushering off eliminated contestants); Greginald Spencer, the new “Set It Off Man”; and the Apollo’s Amateur Night house band led by music director, Michael Mitchell (MJ The Musical). Some of the biggest artists in the world including H.E.R., D’Angelo, Lauryn Hill, Machine Gun Kelly, and Ella Fitzgerald – who won the very first year – have competed for the bragging rights. For more than 80 years, Amateur Night continues to be a coveted testing ground for up-and-coming artists who have gone on to work professionally in the entertainment industry including Michelle Brooks-Thompson, Christian Guardino Sung Lee, Wé McDonald, Alexis Morrast, Austin Paul Jr. and Matthew Whitaker, among others. Amateur Night at the Apollo is produced by Marion J. Caffey along with coordinator Kathy Jordan Sharpton.

Through its programming and education initiatives, the Apollo continues to partner with artists and foster career development for artists and arts administrators alike, fostering the next generation of performance-makers both onstage and behind the scenes. The Apollo’s forward-looking artistic vision continues to build on this legacy, while also serving as a partner, commissioner, and co-producer of programming that articulates African American narratives and creating a 21st century performing arts canon.

In addition to Amateur Night at the Apollo, the non-profit organization offers a dynamic lineup of free and ticketed programs in-person at the Apollo’s historic theater and online on the Apollo Digital Stage. Highlights include Apollo Master Artist-in-Residence Ta-Nehisi Coates and The Roots’ Tariq “Black Thought” Trotter, in conversation; the Lyricist Lounge 30th Anniversary Concert featuring hip-hop trailblazers to be announced; the premiere of The Gathering: A Collective Ring Shout, co-presented by the American Composers Orchestra and the Apollo and co-curated by National Black Theatre; the return of the Africa Now! Festival featuring East African jazz vocalist and Grammy nominee Somi; and more. As with all of its programming, the non-profit Apollo’s season centers Black artists and voices from the African Diaspora with myriad opportunities for artists and audiences to come back together at the iconic theater. For a complete lineup and more information about the Apollo, please visit www.ApolloTheater.org

COVID-19 PROTOCOLS
The health and safety of our audiences, artists, and staff is the Apollo’s top priority. Please note that all attendees must present a government-issued picture ID prior to entry and show a completed vaccination card authorized by the FDA or WHO against COVID-19 (dated at least 14 days before the show). Proof of vaccination can be displayed on smartphones. Proof of vaccination may also include a CDC Vaccination Card (or photo), NYC Vaccination Record, or an official immunization record from outside New York City or the United States. Photo ID for children under 12 will not be required if they are accompanied by parents/guardians with government-issued photo ID. All attendees are required to wear masks inside the theater. For a complete list of the Apollo’s COVID-19 safety protocols, please visit www.ApolloTheater.org.

SPONSORS
Amateur Night at the Apollo is made possible by leadership support from Coca-Cola.

ABOUT THE APOLLO
The legendary Apollo Theater—the soul of American culture—plays a vital role in cultivating emerging artists and launching legends. Since its founding, the Apollo has served as a center of innovation and a creative catalyst for Harlem, the city of New York, and the world.

Since introducing the first Amateur Night contests in 1934, the Apollo has served as a testing ground for new artists working across a variety of art forms and has ushered in many new musical genres—including jazz, swing, bebop, R&B, gospel, blues, soul, and hip-hop. Among the countless legendary performers who launched their careers at the Apollo are Ella Fitzgerald, Sarah Vaughan, Billie Holiday, James Brown, Stevie Wonder, Gladys Knight, Luther Vandross, H.E.R., D’Angelo, Lauryn Hill, Machine Gun Kelly, and Miri Ben Ari; and the Apollo’s forward-looking artistic vision continues to build on this legacy. For more information about the Apollo, visit www.ApolloTheater.org.