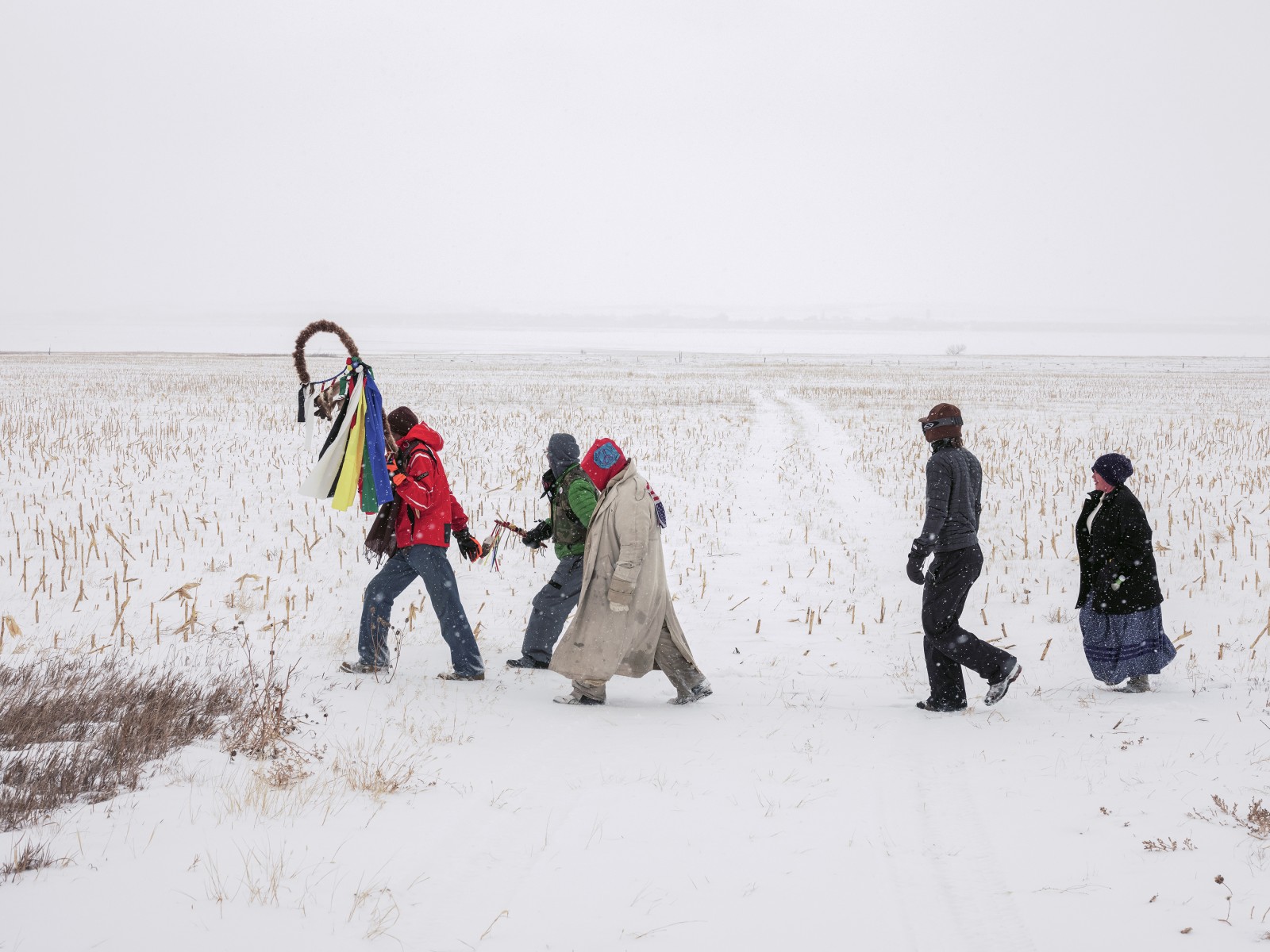 This December, the Amon Carter Museum of American Art (the Carter) will present Mitch Epstein: Property Rights, the first museum exhibition of photographer Mitch Epstein’s acclaimed large format series documenting many of the most contentious sites in recent American history, from Standing Rock to the southern border, and capturing environments of protest, discord, and unity. Produced between 2017 and 2019, the 21 works in the Carter’s exhibition contrast the majesty of America’s natural landscape with its fraught history of claimed ownership, prompting pressing yet enduring questions of power, individualism, and equity. Mitch Epstein: Property Rights will be on view at the Carter from December 22, 2020 to February 28, 2021.

What began for Epstein as a single visit to Standing Rock following the 2017 revival of the Dakota Access Pipeline became the basis for his sweeping exploration of land rights in America—examining who is entitled to it and at what cost. At the protest site, Epstein experienced meaningful encounters with the matriarchal elders at the forefront of the pipeline’s resistance and found himself grappling with America’s lasting legacy of land confiscation and misuse. That experience led the artist to seek out similar pipeline protests in Huntingdon County, PA where “Tree-Sits” were mobilized to oppose Energy Transfer’s construction. Over the next two years, Epstein used his camera to chart a network of contested land in America that manifested clashes over immigration at the Texas border, capitalist expansion in Arizona’s Ironwood Forest, and environmental degradation in Paradise, CA. Together, the series highlights the interconnectivity of seemingly disparate sites of American conflict, all of which weigh the right to private property against the value of public access and preservation.

“The Carter has a long history of showcasing insightful representations of the American landscape. From Thomas Cole onwards, the artists represented in our collection have highlighted the majesty of this country’s land while addressing ongoing conflicts surrounding preservation and exploitation,” said Andrew J. Walker, Executive Director. “Property Rights underscores the contemporary relevance of landscape figuration through visually stunning presentations of America’s most significant flashpoints. Epstein’s meditations on these lands are exacting and form a critical dialogue on ideas of access and individualism in our nation’s past and present.”

Earning acclaim as a pioneer of fine-art color photography in the 1970s, Mitch Epstein has established an artistic practice integrally linked to his travels. While the sites and subjects of his images prove diverse, Epstein’s central inquiry into how photography can translate super-charged, abstract concepts persists. His work blends the seemingly opposing impulses of social realism and conceptualism, to produce technically striking glimpses into nature and the human condition. Foreshadowing Property Rights, Epstein journeyed across the country from 2004 through 2009 to examine American energy use. The resulting large format series and publication, both entitled American Power, posed questions on the intersections of energy and politics and the manifold implications of “power.” Both series demonstrate Epstein’s keen ability to mobilize the formal conventions of his medium to simulate the exchanges of challenging physical, social, and political relationships.

“These photographs ask us to slow down and allow ourselves to be enveloped by their size and detail. Even as they force us to acknowledge their often-distressing subjects, they invite us to relish their color, light, and order, offering a microcosm for reflections on our country itself,” said John Rohrbach, Senior Curator of Photographs at the Carter. “They ask us to think about the powers of governments, corporations, and the courts over the natural environment, about how we relate to each other, about fairness, and about what kind of world we want to live in—and yet they provide no answers. Instead, Property Rights emphasizes just how quickly American history is decided and compels us to confront the complexity that endures.”

Mitch Epstein
Photographer Mitch Epstein (b. 1952) has pioneered fine-art color photography since the 1970s. In addition to exhibiting his work across the United States and Europe, he has published 13 books of his photographs, including Sunshine Hotel (2019), Rocks and Clouds (2017), New York Arbor (2013), American Power (2009), Recreation: American Photographs 1973–1988 (2005), and Family Business (2003), which won the 2004 Kraszna-Krausz Photography Book Award. His photographs are in numerous museum collections, including the Amon Carter Museum of American Art in Fort Worth; New York’s Museum of Modern Art, Metropolitan Museum of Art, and Whitney Museum of American Art; the J. Paul Getty Museum in Los Angeles; the San Francisco Museum of Modern Art; and the Tate Modern in London. A Guggenheim Fellow and Prix Pictet laureate, the artist has also worked as a director, cinematographer, and production designer on several films, including Dad, Salaam Bombay!, and Mississippi Masala. He lives in New York City.