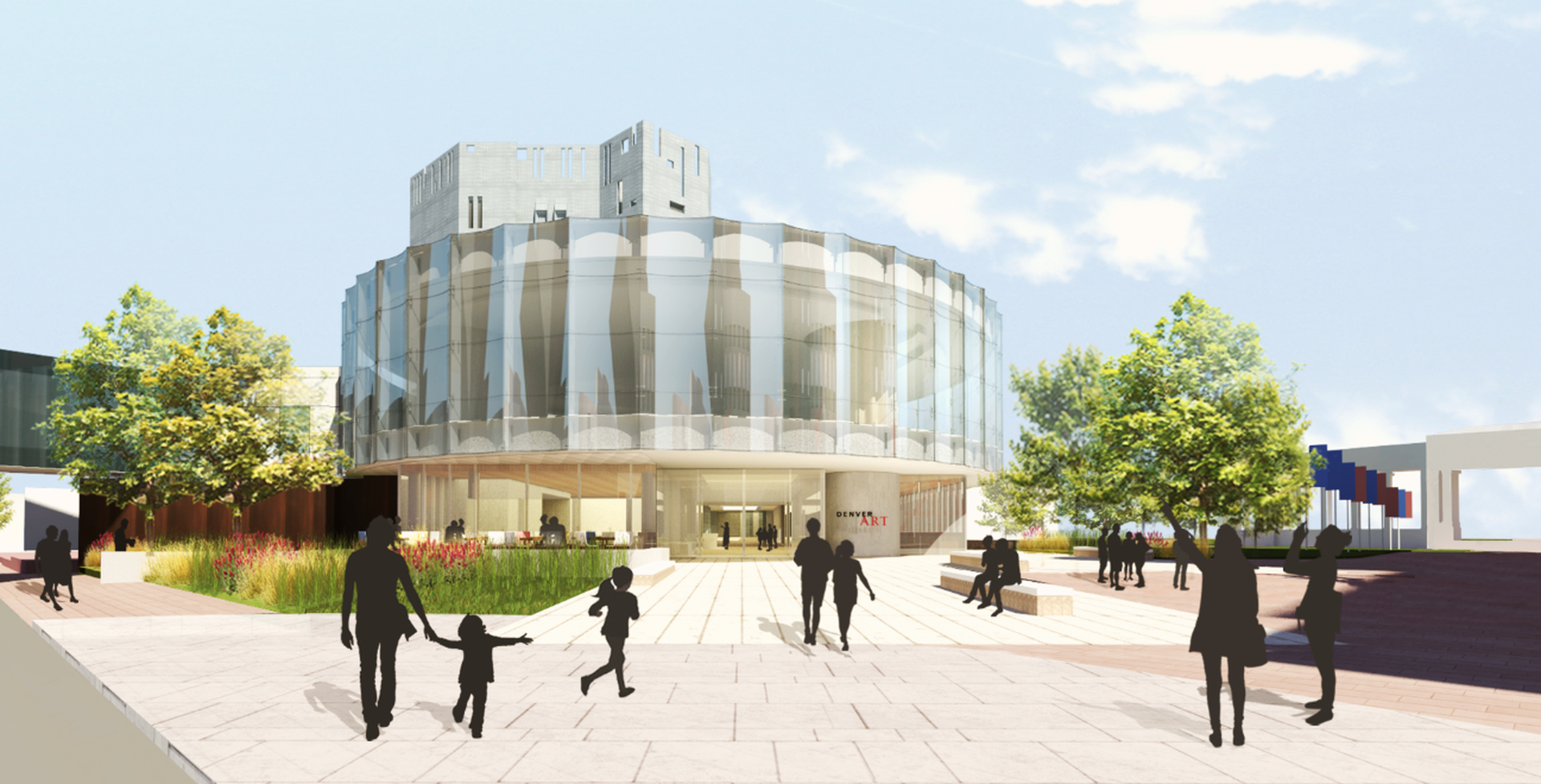 DENVER – Feb. 21, 2017 – The Denver Art Museum (DAM) today announced that Anna and John J. Sie have pledged $12 million to support the construction of a new Welcome Center as part of its North Building revitalization project. The new space will be named the Anna and John J. Sie Welcome Center. Its transparent exterior will serve as a welcoming beacon to visitors and the neighborhood, while creating a clear and accessible point of entry to the North Building.

The DAM’s North Building project was announced in December 2016 and aims to unify the museum’s campus and make key improvements to sustain its operation and relevance into the future. Designed by world-renowned Italian architect Gio Ponti and Denver-based James Sudler Associates, the North Building opened to the public in 1971 and houses the majority of the DAM’s permanent collection galleries. Its seven-story silhouette is celebrated as one of the first-ever high-rise art museums, and is the only completed building in North America designed by the Italian modernist.

The new Anna and John J. Sie Welcome Center takes its inspiration from shapes and volumes originally designed by Ponti for the North Building. The elliptical two-story facility, collaboratively conceived by Fentress Architects of Denver and Machado Silvetti of Boston, will visually connect the campus. The design pays clear homage to the original Ponti architecture while taking into account the unique landscape of the Golden Triangle Neighborhood in the heart of the city. At 50,000 square feet, it will be a significant feature for the museum and will include visitor-centric amenities such as a restaurant, quick-service café, improved ticketing and orientation capabilities, as well as dynamic and flexible program spaces, state-of-the-art event space and below-grade space for art storage and the Museum’s primary conservation lab.

“Anna and I are grateful to have been part of the pioneering cable industry in this country. Having lived the American dream, we are now fortunate to be able to give back to our great state of Colorado and the city of Denver,” said John Sie. “For us, the Welcome Center sends an important message of belonging to all visitors, while also uniting the campus and giving the North Building the entrance it deserves—providing a launch pad for visitors to have a great museum experience.”

John Sie is a longtime supporter of the DAM, serving on the museum’s Board of Trustees since 2002. John and Anna Sie both emigrated to the United States—John from Shanghai, China, when he was 14 years old, and Anna from Naples, Italy, at age 11. They met in New Jersey where they raised their five children together. John was recruited to Colorado by Dr. John C. Malone in 1984 to help build Tele-Communications Inc., and with Malone’s backing John later established the Starz and Encore networks. The Sie family and its foundation have generously contributed to many important museum initiatives, most notably the Frederic C. Hamilton Building Capital Campaign, the Annual Fund Leadership Campaign, the multi-year fund to support the exhibitions and programs of the museum, and the 2011 Xu Beihong: Pioneer of Modern Chinese Painting exhibition, which brought more than 60 works by the iconic artist from China to Denver.

“We are honored and grateful to have Anna and John Sie’s generous support for this new space that provides a more welcoming connection for the campus and an open invitation for all who pass through the Golden Triangle Neighborhood each day,” said Christoph Heinrich, Frederick and Jan Mayer Director of the DAM. “John has tirelessly worked to help guide the museum in his role as a trustee, and was instrumental in ensuring the North Building continued to be vital by encouraging the breezeway across 13th Avenue to connect it with the newer Hamilton Building during that design process. We are now excited to take the next important step in the North Building’s revitalization and the completion of our campus with this support.”

The goals of the North Building project include stewardship of the building, connecting the campus and the neighborhood, and celebrating museum learning and engagement. In addition to constructing the Anna and John J. Sie Welcome Center, other projects include expanding gallery spaces for growing collections for design and Western American art, completing Ponti’s original vision for visitor access to stunning 7th-floor views, exterior site improvements, and updating DAM’s environmental spaces and technology. The North Building project is currently in the design phase. Plans call for construction to begin by the end of 2017, with project completion by the building’s 50th anniversary in 2021. More details on the design will be released as the project develops.