Event includes highlights from the Mary J. Blige induction into the legendary Apollo Walk of Fame and more The evening will also honor Felicia and Ben Horowitz with the Impact Award for Philanthropy and Derrick ‘D-Nice’ Jones with the Percy E. Sutton Awar 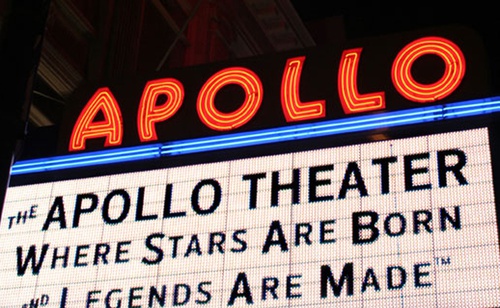 APOLLO RESOUNDING will honor Felicia and Ben Horowitz with the inaugural Impact Award, given to individuals whose philanthropic leadership has made an extraordinary impact on the arts and artists and who share the Apollo’s values of innovation, diversity, and inclusion. Multihyphenated producer and DJ Derrick ‘D-Nice’ Jones will receive the Percy E. Sutton Award, recognizing individuals who uphold the value of the arts and philanthropy as a crucial part of the fabric of our community. The benefit is chaired by the Apollo Board Chair Charles Phillips and Karen Phillips, Cheryl and Derek Jones, and Carolyn and Mark Mason.

APOLLO RESOUNDING underscores the Apollo’s role as a mission-driven cultural and community anchor, which provides a safe space for creativity and unites people all over the world, including thousands of artists at every stage of their careers. Always at the forefront of new cultural movements, even during the pandemic, the messages and music from the storied theater have resounded for nearly 90 years.

APOLLO RESOUNDING, the Apollo’s annual fundraising event, will illuminate the power of the arts to transform, build community, and heal. In addition to raising funds for the Apollo’s innovative artistic and educational programs that serve more than 200,000 people annually, a portion of the resources raised will – once again – support the micro-grant initiative, which was launched last year in partnership with the Apollo, 125th Street Business Improvement District (BID), and Harlem Commonwealth Council. This spring, the micro-grant initiative will continue. Additional details and how to apply can be found here.

About the Apollo Digital Stage

When the pandemic forced the Apollo Theater to close its doors to in-person events, the Theater created the Apollo Digital Stage, offering live and pre-taped concerts, presentations and more, including a livestreamed performance with Wyclef Jean, past Amateur Night at the Apollo performances, live sessions with Apollo Music Café artists such as Infinity Song, the bi-annual Women of the World Festival, last June’s Let’s Stay (In) Together Benefit, education events for children and teens, and conversations with an array of artists and thought leaders, including Ta-Nehisi Coates, John Legend, and more. Since March 2020, programs on the Digital Stage have garnered more than 420,000 views. For more information, please visit apollotheater.org/digitalstage.