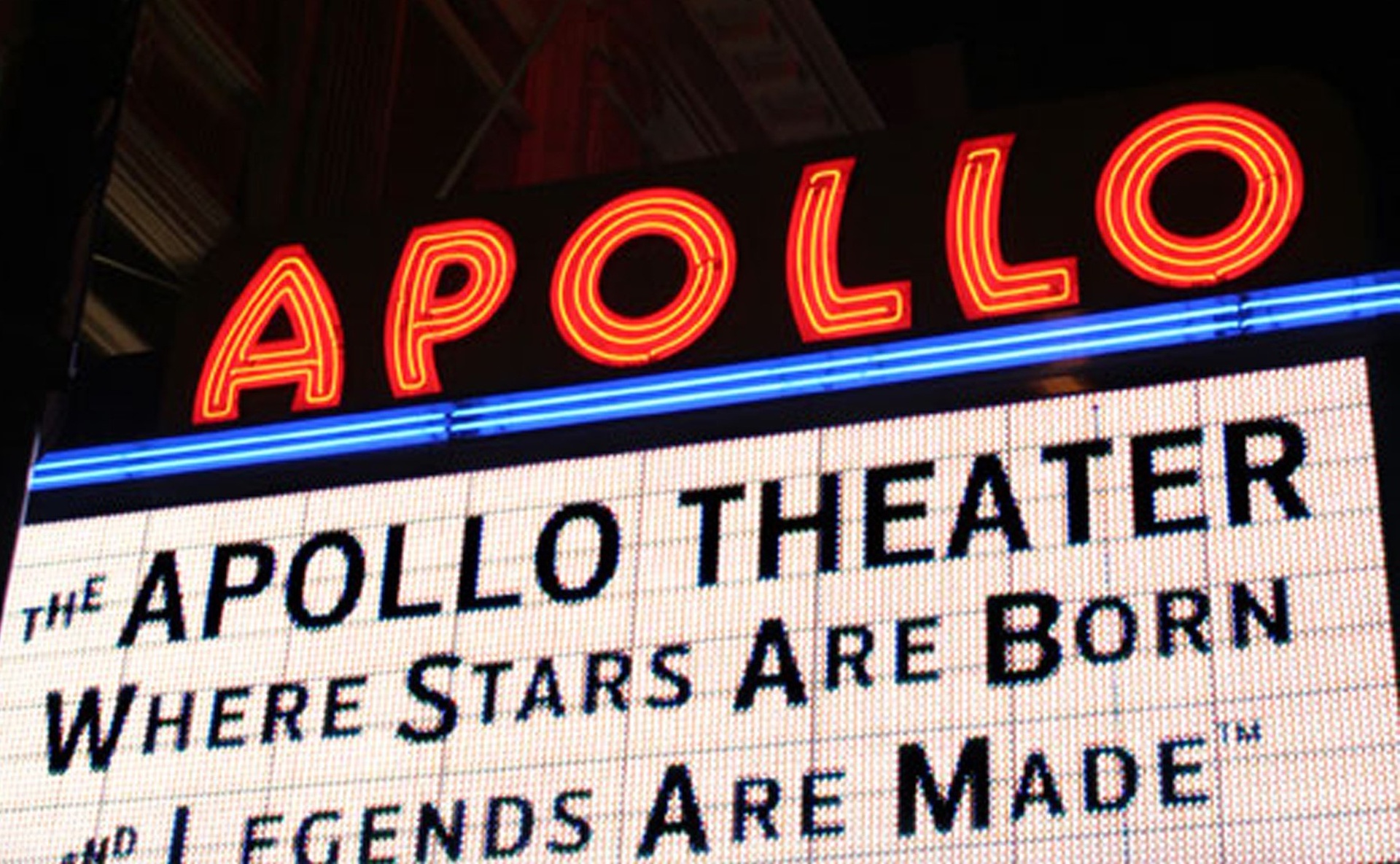 Harlem, NY – (January 23, 2019) To mark the Apollo Theater’s 85th anniversary, the Theater today announced additional programming in its Winter/Spring season, celebrating the iconic theater’s legacy as the epicenter of Black culture and expanding its role as a partner, commissioner, and co-producer of new and important works. Season highlights include a family show with Dance Theater of Harlem; the annual Africa Now!; WOW – Women of the World Festival; Kamasi Washington, in conjunction with AFROPUNK; the signature Amateur Night at the Apollo, with special $8.50 tickets; Apollo Music Café; and Apollo Comedy Club; the spring season culminates with the New York premiere of Twisted Melodies, a soulful play that pays homage to the late singer Donny Hathaway in May. Apollo Theater’s programming continues to advance the nonprofit theater’s commitment to articulating and projecting the African American narrative through arts and culture, creating a 21st century performing arts cannon, and tackling important social issues for Harlem, New York, and the nation.

To celebrate the 85th anniversary season, the Apollo Theater will present an Open House on Saturday, February 2 at 2:00 p.m. Apollo Open House, free and open to the public, will be hosted by Billy “Mr. Apollo” Mitchell and will feature presentations by Brad San Martin, the Apollo’s Digital Archivist, and Ted Fox and James Otis Smith, the creators of the Showtime at the Apollo graphic novel. In addition to the presentations, there will be performances by Rachel Kara Pérez, JSWISS, Jazzmobile and the Sugar Hill Children's Museum of Art & Storytelling. The Open House comes on the heels of the Apollo Performing Arts Center announcement last month, which begins its first phase with the opening of the theaters at the Victoria. Scheduled for fall 2020, this project marks the first physical expansion in the theater’s history. For more information about the theaters at the Victoria and the Apollo’s mission to work with and support a greater number of emerging and established artists of color across disciplines, click here.

“From Africa Now! and Amateur Night, to the premiere of Twisted Melodies, and all the important work our education team is doing with teens and young adults, I am thrilled that our spring season continues to advance our mission and advocacy for African American and Harlem-based artists,” said Kamilah Forbes, Apollo Theater Executive Producer.

The season kicks off with the 85th season of Apollo’s famed Amateur Night at the Apollo, the original, large-scale talent show and one of the longest-running continuous events in New York City. The season opener begins on February 20 and will feature special guest, R&B artist Raheem DeVaughn. Legends such as Ella Fitzgerald, Sarah Vaughn, Luther Vandross, and D’Angelo have all rubbed the famed tree of hope before taking the stage. A brand-new line-up of contestants will compete for an ultimate cash prize of $20,000. To celebrate the new season and the legends it helped propel, tickets for the February Amateur Night will be available for $8.50, made possible with support from sponsor Coca-Cola.

Beginning February 21, the Apollo, in conjunction with AFROPUNK, will present Race Music weekend, a powerful event that will explore the intersection of music, film, and politics, using the approach of co-opting a concept meant to separate and transforming it to a call-to-arms that brings people together. The weekend will feature films curated by ImageNation Cinema Foundation with a special screening of Mr. Soul! presented in collaboration with Firelight Media. Race Music will culminate in a special performance by progressive musician Kamasi Washington on Saturday, February 23 at 8:00 p.m.

The third annual WOW – Women of the World Festival returns to the Apollo March 12 through 17, with a host of programming, including a special concert featuring Alice Smith on Friday, March 15 at 8:00 p.m. and a talk with Suze Orman on Saturday, March 16 at 8:00 p.m. The six-day event features performances, talks, mentoring sessions, and programs that celebrate the achievements of women and girls from all walks of life and all parts of the world. With more than 60 WOW Festivals on five continents, the event extends the Apollo’s role as a cultural and civic anchor dedicated to providing forums for meaningful discussion and exchange of ideas. WOW – Women of the World Festival is presented in partnership with the WOW Foundation. WOW Festivals are presented by arrangement with Southbank Centre, London. Visit www.apollowow.com for more updates and more information.

On Saturday, April 13 the Apollo will present Africa Now! – Dancehall, its annual concert celebrating the best of today’s African contemporary music and spotlighting how the music of the diaspora has impacted the continent of Africa. The dance hall theme will feature contemporary African musicians who have been influenced by the traditions of reggae, dancehall, and soca, including Patoranking (Nigeria), Buffalo Souljah (South African/Zimbabwe), Seyi Shay (Nigeria) and Kaleta, and the Super Yamba Band (Benin/Brooklyn). The weekend will also include a film series in partnership with the New York African Film Festival, late-night performances, and DJ sets in the Apollo Music Café, continuing the Apollo’s mission to serve as a partner in the articulation and projection of the African American narrative and its role in the development of American and global culture, advancing its impact worldwide.

The Apollo Theater Salon Series returns in April to present WiLDFLOWER, a work-in-progress being developed as part of National Black Theater’s Soul L.A.B. Residency and the Apollo, which began in 2016 to support innovative artists and new projects. With book, music, and lyrics by Jason Michael Webb and Lelund Durond Thompson, WiLDFLOWER will be workshopped at the Apollo for three days, culminating in two staged readings on Friday, April 26 and Saturday, April 27 at 7:30 p.m.

The spring season will culminate with Twisted Melodies, written and performed by Kelvin Roston, Jr. and directed by Derrick Sanders. The intimate one-man theater production highlights the life, artistry, and struggles of 1970s soul singer and composer Donny Hathaway. The show, running Thursday, May 30 through Sunday, June 2, premieres on the iconic stage 45 years after Hathaway himself last performed on it, providing an additional opportunity to celebrate African American arts and culture and serve as a cultural resource for the community. Twisted Melodies is co-presented with Baltimore Center Stage and Mosaic Theater.

Presenting new artists on the Apollo’s intimate Soundstage, The Apollo Music Café returns monthly on Fridays and Saturdays to feature over a dozen forward-thinking, innovative artists and diverse performances across genres, from R&B, hip-hop, soul, and jazz to pop, funk, and rock. Highlights include Harlem to Hollywood featuring Malik Yoba on Feb. 8 and special performances by Young Paris, Butterscotch, and more.

The Apollo’s robust year-round education and community programs continue this spring with Apollo’s Uptown Hall and Livewire gatherings and discussions that tackle key issues of our day. The theater will also present a special Family Showtime event with Dance Theatre of Harlem, celebrating their 50th anniversary on Sunday, February 16 at 1:00 p.m. with a special presentation of its legendary lecture demonstration originally created by Arthur Mitchell.

A complete line-up of the 85th Anniversary Season can be found in the PDF of the press release.