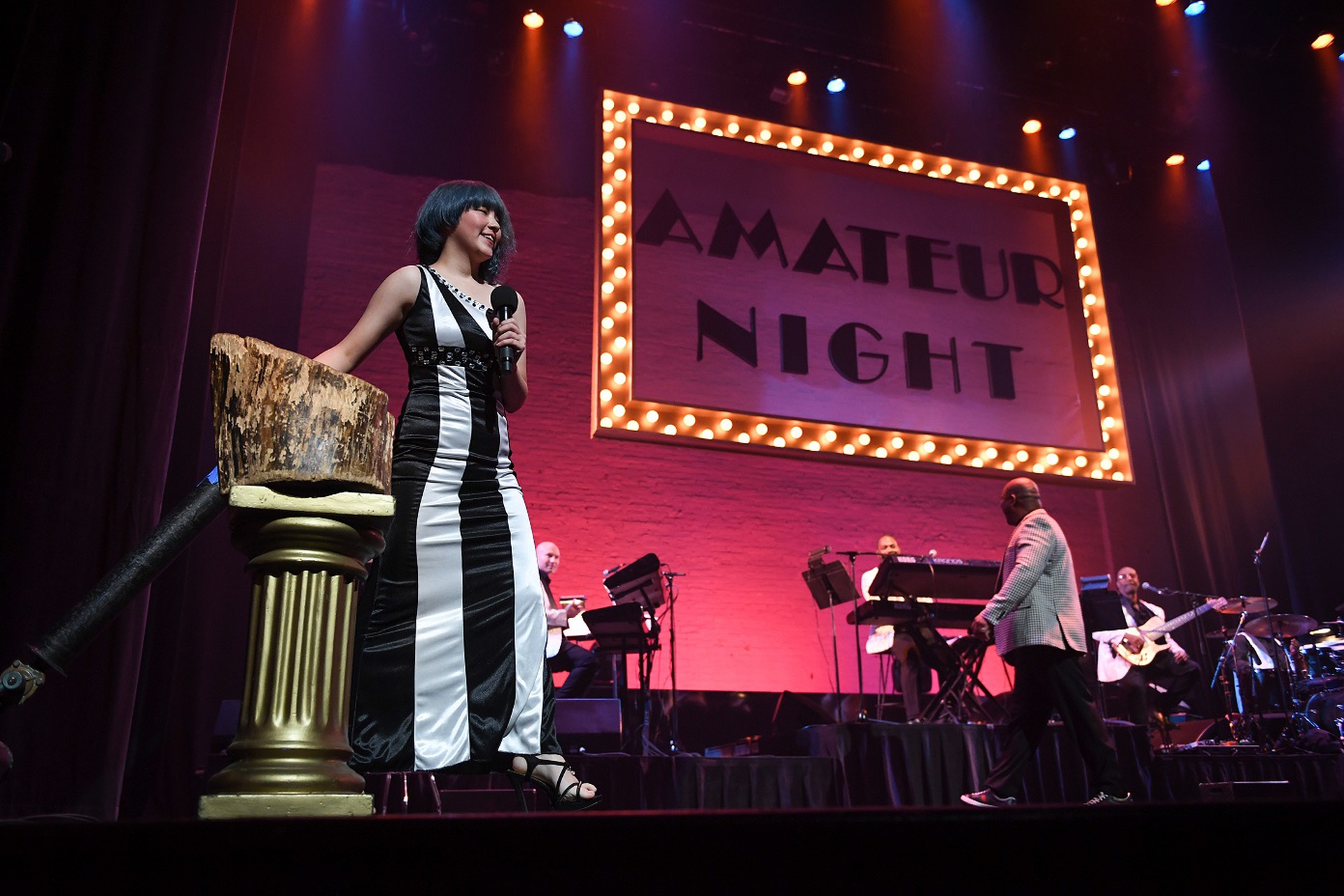 Harlem, NY – (October 15, 2019) – The Apollo Theater today announced that it has granted an exclusive license to Yoshimoto Kogyo Co., Ltd., the largest entertainment company in Japan, to produce Apollo Amateur Night Japan 2019. Amateur Night at the Apollo, the original, large-scale talent show and, after 85 years, one of the longest-running continuous events in New York City, is globally recognized as one of the most influential and celebrated platforms for emerging artists to showcase their talents. Since 1934, artists at the beginning of their careers, from Ella Fitzgerald, Sarah Vaughan, and Luther Vandross to Lauryn Hill, D’Angelo, and H.E.R. have all rubbed the famed tree of hope for luck before taking the stage, along with hundreds of other up-and-coming musicians, dancers, comedians, and other entertainers who have vied for the opportunity to compete on the legendary stage. Amateur Night Japan 2019 will continue that tradition in cities across Japan.

After receiving more than 1,000 video auditions, Apollo Amateur Night Japan will bring together singers, dancers, rappers, comedians, and more, ages five and older, for live auditions in Osaka and Tokyo this month. Winners from these competitions will take the final stage on Wednesday, November 13 at the Cool Japan Park TT Hall within the Osaka Castle grounds, where they will compete for the grand prize. The Apollo’s Amateur Night Producer, Marion J. Caffey, will work with Yoshimoto Kogyo Co., Ltd. throughout the initiative and will serve as a special guest judge at the finale. The first-place winner of Apollo Amateur Night Japan will receive $10,000, and the runner-up will receive $2,000. The Apollo will welcome both the winner and runner-up to perform on the nonprofit theater’s famed stage as part of the Super Top Dog Finale on Wednesday, November 27, 2019.

“We have seen a large increase in the number of talented contestants traveling from Japan to audition for the chance to perform on the Apollo’s world-famous stage,” said Kamilah Forbes, Apollo Theater Executive Producer. “So, bringing the Amateur Night experience to Japan served as an exciting opportunity for the institution and we are thrilled to partner with Yoshimoto Kogyo. This partnership will support the Apollo’s ongoing programming in Harlem as we continue to foster emerging talent and work with the next generation of artists both on stage and behind the scenes.”

Aldo Scrofani, Apollo Theater Chief Operating Officer added, “It has always been a top priority for the Theater to engage communities in international households. The production of Amateur Night at the Apollo in Japan and potentially the Asian market, solidifies our commitment to the cultivation of diverse audiences in Harlem and abroad, ultimately creating a place for music lovers around the world to call home.”

“It is an honor to have formed a partnership with the Apollo Theater to host the Japan round of the legendary Amateur Night competition. As a major entertainment company, we are continually trying to make use of our vast network to discover new talent every day. We are excited to to uncover hidden talents through Amateur Night Japan! Finally, thank you Kimiko Matsuo, for connecting us to the Apollo Theater, and for working as a project coordinator for us," said Shu Kamigaso, Yoshimoto Kogyo Contents Business Division Head.

Since introducing the first Amateur Night contests in 1934, the Apollo Theater has served as a testing ground for new artists working across a variety of art forms and has ushered in the emergence of many new musical genres—including jazz, swing, bebop, R&B, gospel, blues, soul, and hip-hop. The Apollo’s Amateur Night also served as the inspiration for “Showtime at the Apollo,” the acclaimed televised performance competition that ran for over 20 years and featured countless professional and up-and-coming artists. The show was revived in 2017, featuring Steve Harvey as the host, for two special showcases and a full season in 2018. Through its programming and education initiatives, the Apollo continues to partner with artists and foster career development for artists and arts administrators alike, fostering the next generation of performance-makers both onstage and behind the scenes. The Apollo’s forward-looking artistic vision continues to build on this legacy, while also serving as a partner, commissioner, and co-producer of programming that articulates African American narratives and creating a 21st century performing arts canon.

With music at its core, the Apollo’s programming extends to dance, theater, spoken word, and more. This includes special programs such as the blockbuster concert Bruno Mars Live at the Apollo, 100: The Apollo Celebrates Ella, the annual Africa Now! Festival, the New York premiere of the opera We Shall Not Be Moved, and the world premiere of Between the World and Me. The Apollo is a performing arts presenting organization that also produces festivals and large-scale dance and music works organized around a set of core initiatives that celebrate and extend the Apollo’s legacy through a contemporary lens; global festivals including the Women of the World (WOW) Festival and Breakin’ Convention, international and U.S.-based artist presentations focused on a specific theme; and special projects, multidisciplinary collaborations with partner organizations.

Yoshimoto Kogyo is a Japanese entertainment company with 107 years of history. Their business in the entertainment field, with talent management being the core, has expanded to theatre management, content production, management of entertainment schools, film production, organizing film festivals, promotion and many more business areas both locally and internationally. Now they run 16 live comedy theaters and manage over 6,000 performers including comedians, actors, athletes, and so on.