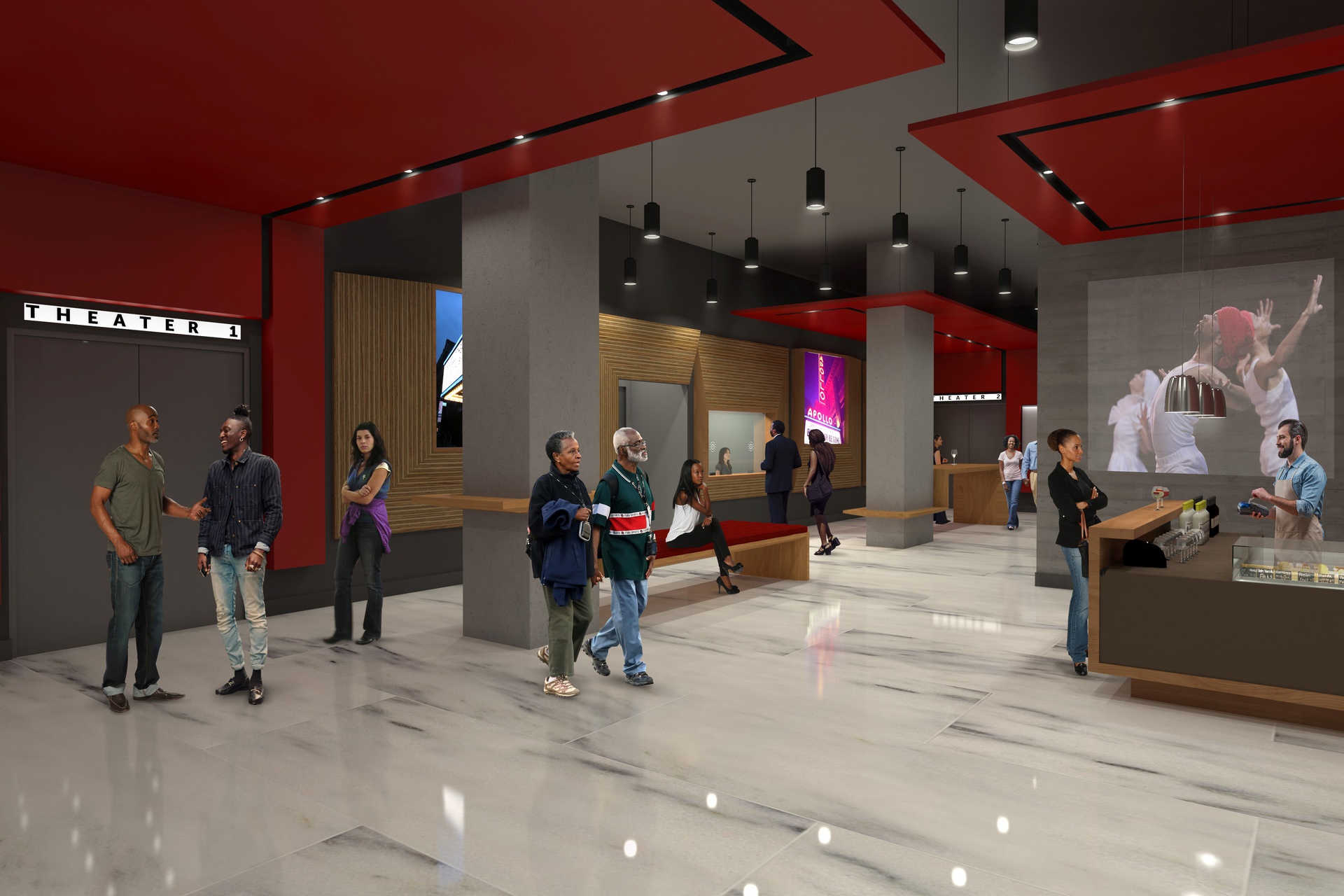 Image
Lobby and box office at the theaters at the Victoria. Kostow Greenwood Architects

(Updated September 13, 2019) The Apollo Theater announced today that it is undertaking the initial phase of the iconic Theater’s transformation into the Apollo Performing Arts Center through two new theaters within the Victoria Theater Redevelopment Project at 233 West 125th Street. The theaters will be the first physical expansion of the Apollo in its nearly 85-year history. Scheduled to open in fall 2020, the two new theaters at the Victoria building will allow the nonprofit Apollo Theater, which will operate the spaces, to increase the number of programming, educational, and community programs it offers. Under the management of the Apollo, the space will house partner organizations, identified in collaboration with the Empire State Development Fund, who enhance the Apollo’s advocacy for African-American, African-diasporic, and Harlem-based artists and culture. In conjunction with the initiative, the Apollo will develop a theater rental subsidy program for nonprofits, with details to be announced. The Victoria Theater’s revitalization into a creative and community resource expands on the Apollo’s mission to work with and support a greater number of emerging and established artists of color across disciplines, and serve as an artistic, educational, and community resource.

“The Apollo Theater is reaffirming its deep responsibility to our community and to the emerging and world-class artists with whom we work while, simultaneously, creating ways to offer even greater opportunities to artists, audiences, students, and the community and safeguarding the spirit and cultural character of Harlem,” said Apollo Theater President and CEO Jonelle Procope. “At the heart of this endeavor and the future Apollo Performing Arts Center is the Apollo’s desire to expand our many positive impacts. The Victoria revitalization is the right moment to support the important work New York’s cultural organizations are doing while expanding our programming and educational offerings, shepherding in the next generation of the creative workforce of color.”

The Apollo Theater will serve as the operator and manager for the theaters located within the Victoria Theater Redevelopment Project, a public/private partnership that also includes residential units, retail, and a hotel. The Apollo will manage the cultural initiatives, including two new, state-of-the-art, flexible performance venues, one with 99 seats and the other with 199 seats, and office space for the Apollo and partner cultural organizations. Separate developers will manage the commercial aspects of the building. The Victoria Theater Redevelopment Project is a part of the revitalization of 125th Street by the State of New York.

Apollo’s 25,000-square foot facility, designed by Kostow Greenwood Architects, will be located on the third and fourth floors of the building. The expanded venue will allow the Apollo to serve the needs of its artists, artistic partners, staff, audiences, the community, and tourists who travel to Harlem every year.

“The Apollo is the soul of American culture, and the Apollo Performing Arts Center will allow us to share that culture with an even wider audience, not only with the Apollo’s own productions, but with other cultural institutions that will help us create and develop the kinds of resources that serve the creative community and audiences around the corner and around the world,” said Apollo Theater Executive Producer Kamilah Forbes. “The new theaters will allow the Apollo to provide support for artists throughout their career, especially emerging artists, and will provide an opportunity for us to grow our artistic programming as we continue to create a new, 21st-century performing arts cannon and provide space to incubate, develop, and collaborate on new works that speak directly to the needs of our community. This expansion will allow the Apollo to look to the future while protecting the heritage that makes Harlem such an indispensable part of New York City and the world.”

“With UMEZ’s substantial commitment to the Victoria Theater Redevelopment Project, and our grant support to the Apollo Theater, we believe these two dramatic new stages will showcase the wide-ranging creative talents that make Upper Manhattan their home base. These fully-equipped, multi-purpose theaters will further enliven 125th Street, now re-emerging as a vibrant cultural corridor, particularly for artists of color,” said Blair M. Duncan, President and CEO of the Upper Manhattan Empowerment Zone. “We are proud to be supporting this dynamic project, which will bring both cultural and economic vitality to Upper Manhattan.”

“We are delighted to partner with the iconic Apollo Theater. The theaters at the Victoria will add vital new space for cultural and educational programming while preserving and restoring a reminder of Harlem’s rich history,” said Curtis Archer, President of the Harlem Community Development Corporation. “HCDC looks forward to bringing both a new mixed-use, mixed-income development and hundreds of new jobs to the neighborhood through the Victoria Theater Redevelopment Project as a whole.”

“The Classical Theatre of Harlem is thrilled for the opportunity to be a cultural partner with the Apollo in the theaters at the Victoria,” said Peggy King Jorde, Board Chair, Classical Theatre of Harlem. “This exciting new project will allow Harlem-based institutions such as CTH the much needed, state-of-the-art performance space to reach a wider audience, expand our programming, and work with like-minded organizations.”

“On behalf of the Harlem Arts Alliance membership we salute the developers, sponsors, and supporters in their collective partnership in the launch of the new cultural spaces in the historic Victoria Theater,” said Voza Rivers, Harlem Arts Alliance Chairman. “Thanks to all in adding another jewel to Harlem’s cultural assets.”

“For 55 years, Jazzmobile’s mission has been to present, preserve, promote, and propagate jazz – America’s classical music. We welcome this opportunity to again partner with the Apollo Theater, who, like us has long been an advocate for this artform and for the community,” said Jazzmobile’s Director, Robin Bell-Stevens. “Through the theaters at the Victoria we are looking forward to having a year-round performance space, strengthening our relationship with the Apollo and The Classical Theater of Harlem (a longtime collaborator) as well as with the other organizations that will take advantage of these venues.”

With music at its core, the Apollo’s programming extends to dance, theater, spoken word, and more. This includes special programs such as the blockbuster concert Bruno Mars Live at the Apollo, the world premiere theatrical reading of Ta-Nehisi Coates’s National Book Award-winning Between the World and Me, 100: The Apollo Celebrates Ella, the annual Africa Now! Festival, and the New York premiere of the opera We Shall Not Be Moved. The Apollo is a performing arts presenting organization that also produces festivals and large-scale dance and music works organized around a set of core initiatives that celebrate and extend the Apollo’s legacy through a contemporary lens; global festivals including the Women of the World (WOW) Festival and Breakin’ Convention; international and U.S.-based artist presentations focused on a specific theme; and Special Projects, multidisciplinary collaborations with partner organizations.

Since introducing the first Amateur Night contests in 1934, the Apollo Theater has served as a testing ground for new artists working across a variety of art forms and has ushered in the emergence of many new musical genres—including jazz, swing, bebop, R&B, gospel, blues, soul, and hip-hop. Among the countless legendary performers who launched their careers at the Apollo are Michael Jackson, Ella Fitzgerald, Stevie Wonder, Billie Holiday, James Brown, D’Angelo, Lauryn Hill, Dave Chappelle, Machine Gun Kelly, Miri Ben Ari, Sarah Vaughan, Gladys Knight, and Luther Vandross; and the Apollo’s forward-looking artistic vision continues to build on this legacy. For more information visit https://www.apollotheater.org/