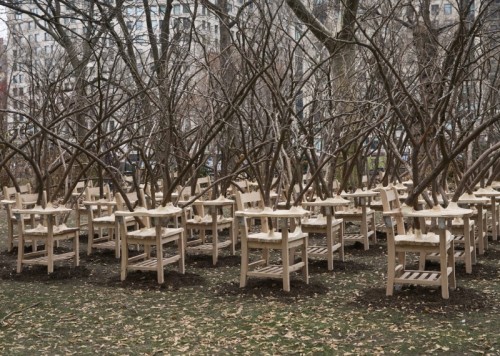 Artist Hugh Hayden realizes his most ambitious installation to date with a new public art commission at Madison Square Park. Presented across four separate lawns in the park, Brier Patch features a total of one-hundred wooden elementary school–style desks that erupt with tree branches, cohering into tangled assemblies with complex and layered meanings. The accumulations of desks summon the grid arrangement of classroom seating. Referencing folklore traditions around the world, the work calls on the notion of the brier patch as a place protective for some and dangerous for others, drawing connections to similar disparities within the education system and the ideal of the American Dream. Now on view through April 24, 2022, Brier Patch is complemented by a suite of public programs centered on storytelling and education.

“In Hugh Hayden’s project, the overgrown configuration of branches overwhelms and encumbers the placidity of seats of childhood learning. Hayden imbues each of his works with intense meaning that, when peeled back, reveals lived experiences about rooted systems in our country and the world. He transforms everyday objects into new forms that expose the properties and purpose of the original source,” said Brooke Kamin Rapaport, Deputy Director and Martin Friedman Chief Curator of Madison Square Park Conservancy. “Brier Patch is both visually powerful and loaded with inherent tensions—growth and stagnation, seduction and peril, individual and community—that ask us to consider how these dichotomies coexist in engrained systems and the work on view.”

For Brier Patch, the Conservancy’s 42nd commissioned exhibition, Hayden fabricated tablet arm desks that sprout a tangled mass of tree branches, which are presented across four different lawns in the park. The largest group of 48 desks, arranged in a grid pattern, are sited on the Oval Lawn; another smaller grid is situated on Sparrow Lawn across from the playground in the Northeast corner of the park. Two desks intermingle on Elm Lawn. An additional group on the Veteran’s Lawn are presented without branches, enabling visitors to sit at the desks.

With its grid of repeated desk forms, Brier Patch alludes to the typical classroom organizational structure of row upon row of desks or even the regimented arrangement of tombstones in a military cemetery. In Hayden’s installation, each desk, like a tombstone, can be seen as a stand-in for an individual. The chaotic branch structures disrupt the intended placidity of the formation, uniting individual elements to form one interconnected community. The project simultaneously signifies intellectual development and stasis—dual outcomes of an education system where some excel and others are left behind. For Hayden, the symbolism also extends to the financial entanglement of student loan debt incurred in the pursuit of higher education.

These and other interpretations are echoed within the concept of a brier patch for which the project takes its name, an environment that is difficult to inhabit, where only a few can truly thrive. In deploying this reference, Hayden also draws upon brier patch tales found in folklore traditions around the world, including Joel Chandler Harris’ Uncle Remus stories, now widely condemned for their apocryphal depictions of idyllic Southern plantation life.

Added the Conservancy’s Executive Director Keats Myer, “The Conservancy’s public art program not only provides encounters with inspiring and challenging works of art to the 60,000 visitors who pass through Madison Square Park daily, but also gives artists the opportunity to experiment with their practices. We are proud to collaborate with Hugh Hayden on this project and to present him with the canvas of our park, where he will be able to express his vision on a new scale.”

Hugh Hayden is a visual artist and sculptor whose practice considers the anthropomorphization of the natural world as a visceral lens for exploring the human condition. Raised in Texas and trained as an architect, his work often explores commonplace objects and their inherent symbolism in individual and collective lives. Hayden utilizes wood as his primary medium, frequently loaded with multi-layered histories in their origin, including objects as varied as discarded tree trunks, Christmas trees, cooking pans, or souvenir African sculptures. He saws, weaves, sculpts, and sands the material, creating works that reflect inherent cultural histories. Crafting metaphors for human existence and past experience, Hayden’s work questions the stasis of social dynamics and asks the viewer to examine their place within an ever-shifting ecosystem.

Hayden has had solo exhibitions at The Princeton University Art Museum in New Jersey in 2020 and at White Columns in New York in 2018. His work has been included in numerous group exhibitions including SculptureCenter, New York (2021); Hayward Gallery, London (2020); The Shed, New York (2019); Pilot Projects, Philadelphia (2018); Sundance Film Festival, Park City, UT (2015); MoMA PS1, New York, (2014); and Socrates Sculpture Park, New York, (2014). He is the recipient of residencies at Glenfiddich in Dufftown, Scotland (2014); Abrons Art Center and Socrates Sculpture Park (both 2012); and Lower Manhattan Cultural Council (2011). Upcoming projects include a solo exhibition, Boogey Men, at the Institute of Contemporary Art, Miami, opening in November. He has also conceived a group exhibition with Public Art Fund, titled Black Atlantic, opening in May 2022 at Brooklyn Bridge Park, that will feature new commissions by five artists, including Hayden.

Hayden was born in Dallas, Texas in 1983 and lives and works in New York City. He holds a Bachelor of Architecture from Cornell University and an MFA from Columbia University. In 2020, Hayden, Lisson Gallery and CLEARING established the Solomon B. Hayden Fellowship in memory of Hayden’s father at the Columbia University School of the Arts to support diverse voices in art.

Since 2004, the Conservancy has become a leader in commissioning new works of public art, curating and presenting over 40 major site-specific installations and solo exhibitions through its art programming. Led by Brooke Kamin Rapaport, Deputy Director and Martin Friedman Chief Curator, the program invites leading artists to push the boundaries of their practice and create risk-taking new works that experiment with materiality, scale, and theme in response to the park’s unique environment. The ambition of the commissioning program expands each year alongside the diverse range of innovative artists including Diana Al-Hadid, Tony Cragg, Abigail DeVille, Leonardo Drew, Maya Lin, Iván Navarro, Martin Puryear, Arlene Shechet, Ursula von Rydingsvard, and Krzysztof Wodiczko.