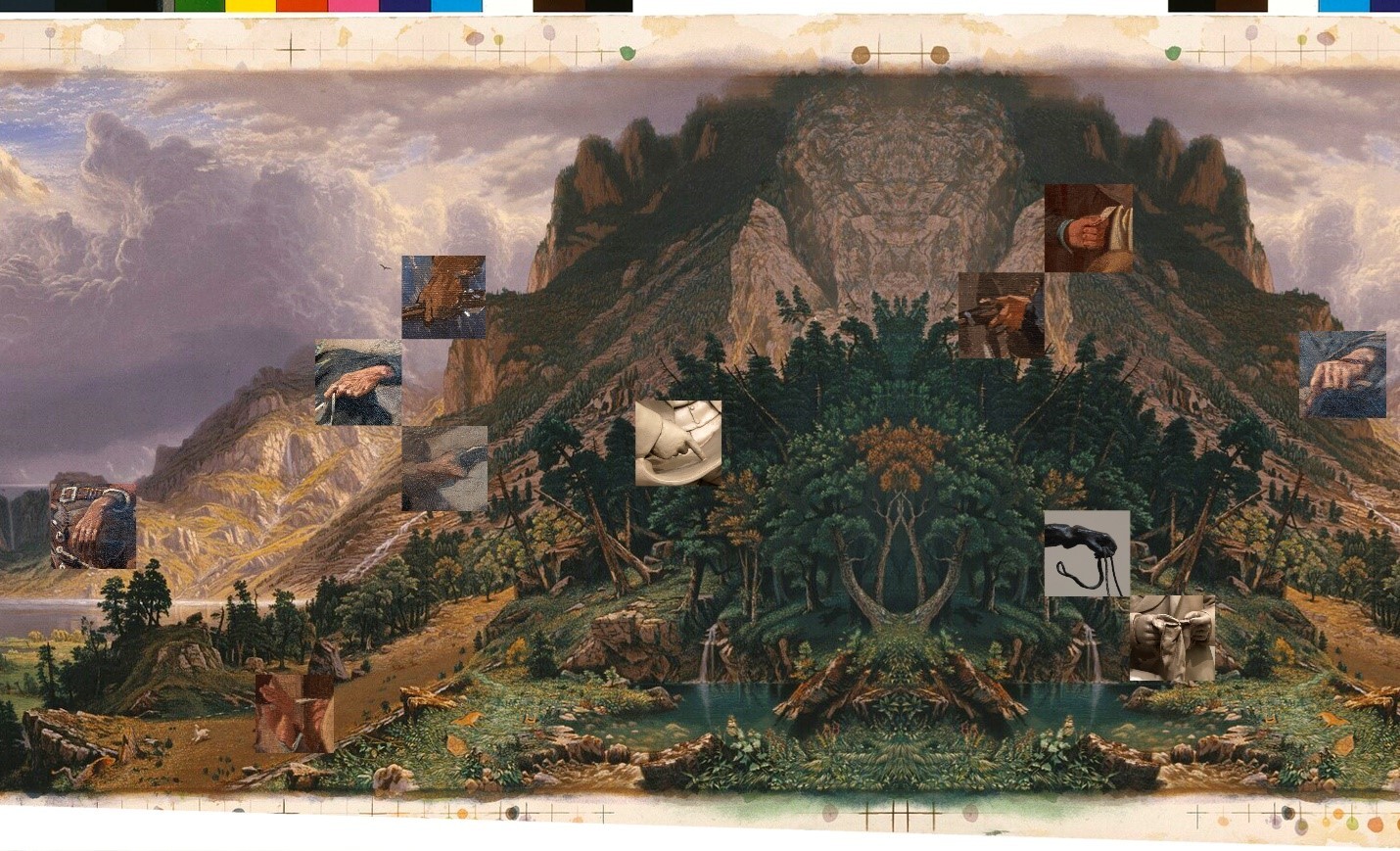 The Amon Carter Museum of American Art (the Carter) today announced that artist Stephanie Syjuco will create an expansive multimedia exhibition in the Museum’s first-floor galleries, opening January 15, 2022. Stephanie Syjuco: Double Vision will present a newly commissioned, site-specific installation by the artist that uses digital editing and archive excavation to transform images of renowned works from the Carter’s collection and reconsider mythologies of the American West. Reframing iconic works by American artists including Albert Bierstadt, Frederic Remington, and others, Syjuco’s work will highlight the constructed nature of historical narratives and reveal how these works and their presentation can perpetuate colonial lore. New photographs by Syjuco will be mounted on two digitally altered landscapes rendered as murals on the gallery’s 50-foot-wide and 15-foot-tall walls with floor-to-ceiling fabric curtains that together create an immersive, 360-degree experience.

“Since its founding, the Carter has worked with living artists to present the best of American art and creativity across media,” said Andrew J. Walker, Executive Director of the Carter. “Syjuco’s probing multimedia practice explores national identity and institutional storytelling and finds a natural match in the Carter’s world-class collection of art of the American West. Her installation will offer a thoughtful critique of the ways in which artists have participated in developing mythologies of the West and ask us to consider the role of museums in preserving, presenting, and interpreting their artworks.”

The mural on the north wall will be a chromolithograph print from the Carter’s collection, The Storm in the Rocky Mountains (ca. 1868), by Bierstadt that has been doubled in places. A Rorschach-esque mirror of itself, the image underscores the projection of promise, fantasy, and opportunity historically placed on western land. Additionally, the mural image will extend beyond the border of the landscape to reveal color—management by both artist and museum—the printer’s color checking as well as a digital color bar from the Carter’s photo studio. Mounted on top of the vinyl mural will be images Syjuco took of White male hands depicted in works throughout the Museum’s western art holdings often in the act of controlling, whether pointing, grasping, or handling items such as reins, ropes, and weapons.

The mural on the south wall will feature a different chromolithograph from the Carter’s Bierstadt holdings, The Rocky Mountains, Lander's Peak (1869). The image will be rendered in chroma key, a kelly-green color often associated with green screens, signaling space that will be manipulated in post-production. This vibrant tonal quality alludes to the pre-existing inhabitants, communities, and infrastructures that are “edited out” in many narratives of western settler expansion. On top of the vinyl, Syjuco will mount large printed photographs of Remington sculptures from the Carter’s collection that she will carefully stage to contain photographic and cataloging tools often hidden from public view—color correction cards, identification tags, and measuring devices. The works will be intentionally captured from rear angles against a dark black background to remove them—literally and metaphorically—from their customary pedestals.

“Syjuco’s rigorous and responsive practice employs deep research, critical humor, and imaginative collaboration to investigate narratives of national and racial identity,” said Kristen Gaylord, Assistant Curator of Photographs. “Her site-specific work with the Carter collection will expose the multiple layers of ‘handling’ that contribute to an imperialist understanding of the West, from the artists’ fabrication of their artworks to the Museum’s staging and presentation of them. By bringing attention to the conventions and assumptions implicit in each of these platforms, she challenges us to consider what stories we tell about our nation, and what purposes and peoples they serve.”

Stephanie Syjuco
Stephanie Syjuco (b. 1974) works in photography, sculpture, and installation, moving from handmade and craft-inspired mediums to digital editing and archive excavations. Using critical wit and collaborative co-creation, her projects leverage open-source systems, shareware logic, and flows of capital in order to investigate issues of economies and empire. Recently, she has focused on how photography and image-based processes are implicated in the construction of racialized, exclusionary narratives of history and citizenship. From 2019 to 2020 she was a Smithsonian Artist Research Fellow at the National Museum of American History in Washington, DC. She is featured in Season 9 of the acclaimed PBS documentary series Art21: Art in the Twenty-First Century. Recent exhibitions include Being: New Photography at the Museum of Modern Art, New York; Public Knowledge, at the San Francisco Museum of Modern Art; Stephanie Syjuco: Rogue States, at the Contemporary Art Museum St. Louis; and Disrupting Craft: Renwick Invitational 2018, at the Smithsonian American Art Museum.

Born in the Philippines, Syjuco received her MFA from Stanford University and BFA from the San Francisco Art Institute. She is the recipient of a 2014 Guggenheim Fellowship Award, a 2009 Joan Mitchell Painters and Sculptors Award, and a 2020 Tiffany Foundation Award. Her work has been exhibited widely, including at MoMA/P.S.1, the Whitney Museum of American Art, the San Francisco Museum of Modern Art, ZKM Center for Art and Technology, the California Biennial at the Orange County Museum of Art, the 12th Havana Biennial, and the 2015 Asian Art Biennial (Taiwan), among others. A longtime educator, she is an Associate Professor in Sculpture at the University of California, Berkeley. She lives in Oakland, California.