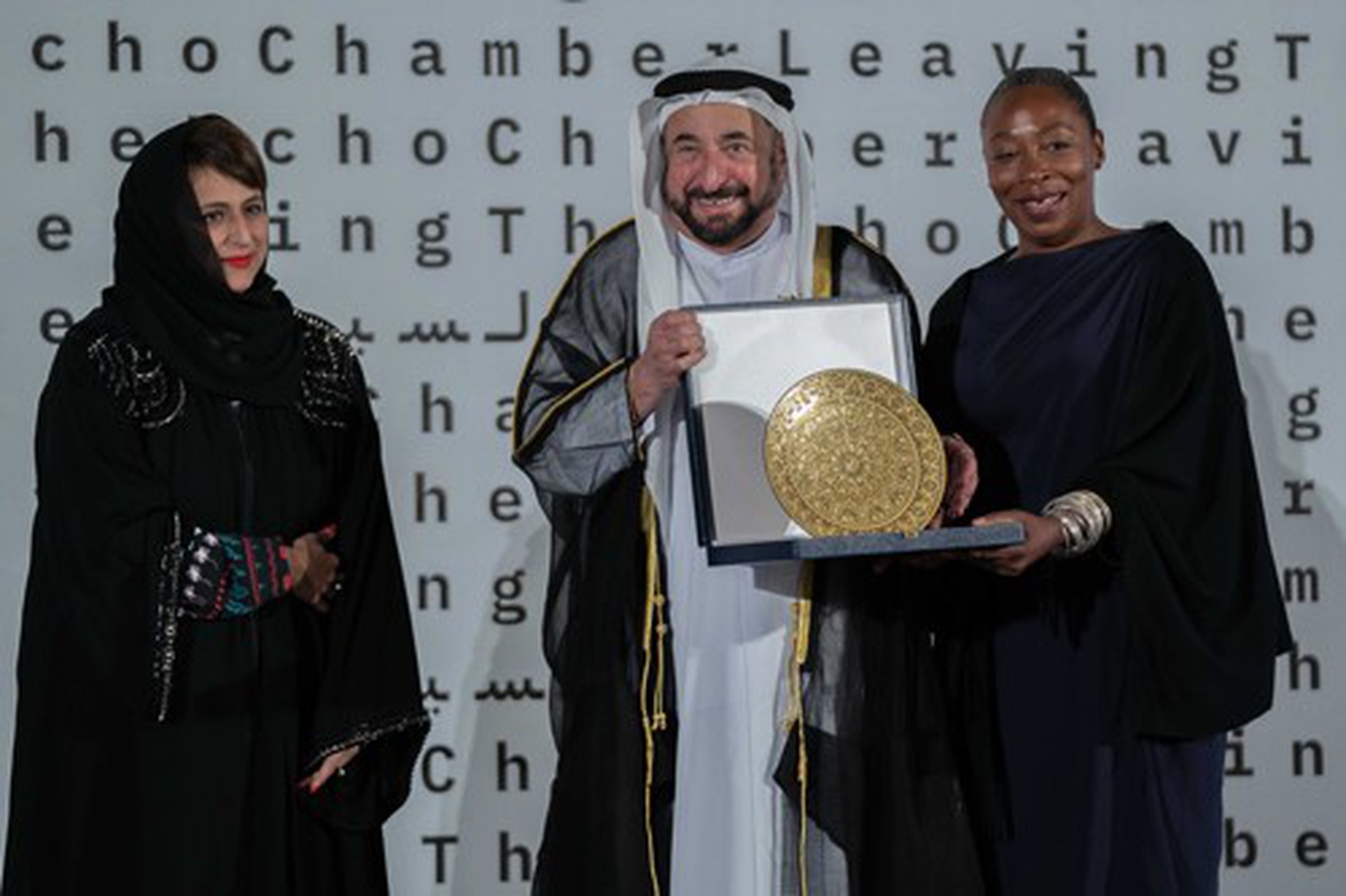 Sharjah Art Foundation announced the winners of the Sharjah Biennial Prize at the opening gala for the Biennial’s 14th edition on the evening of Thursday 7 March 2019. Artists Otobong Nkanga and Emeka Ogboh received the Prize for their collaborative project Aging Ruins Dreaming Only to Recall the Hard Chisel from the Past (2019). Artists Mohamed Bourouissa, Shezad Dawood, Phan Thảo Nguyên and Qiu Zhijie received Special Mentions. A distinguished jury comprised of critic and curator Octavio Zaya, scholar and theorist Homi Bhabha and curator Solange Farkas selected the winners.

For Sharjah Biennial (SB14), which runs through 10 June 2019, curators Zoe Butt, Omer Kholeif and Claire Tancons developed three individual platforms examining the theme, Leaving the Echo Chamber and invited artists to respond. The Prize jurors selected from more than 80 artists who are presenting a range of large-scale installations, performances and works across media –including more than 60 new major commissions and never-before-seen works – on view in buildings and courtyards across the city’s arts and heritage areas as well as SAF’s Al Hamriyah Studios, the east coast city of Kalba and other public spaces across the emirate of Sharjah. Concurrent with the opening of SB14, from 9 to 11 March, the SB14 curators presented the foundation’s March Meeting (MM 2019), an annual convening of local and international artists, curators, scholars and other arts practitioners who explore topical issues in contemporary art through a programme of talks and performances.

The jurors selected Otobong Nkanga and Emeka Ogboh as the winner of the Sharjah Biennial Prize for their collaborative installation Aging Ruins Dream Only to Recall the Hard Chisel from the Past (2019), a series of multimedia interventions in the heritage house Bait Al Aboudi and the surrounding grounds in Al Mureijah Square. In the untended garden of this building, the artists have created several circular craters framed by sand mounds, and they have filled the craters with water brought in from the sea. Salt has been added to ensure that traces of saline will remain as the water evaporates over time. In close proximity to the craters, a number of speakers play a range of natural sounds, a recording of an Emirati ‘rain song’ performed by children in Sharjah and texts conceived from the perspectives of water, earth and trees, written and performed by Nkanga. Light-boxes rendered in the tonal shades of the sunset as well as lines of poetry describe the architecture and materiality of the building. The interplay of evaporating water and waning light recall the departure of life from Bait Al Aboudi, which now stands as a ruin, while simultaneously imbuing the courtyard enclosure with the residue of salt, the sounds of natural elements and voices, and the gradients of the sunset that signal life’s inevitable return.

Mohamed Bourouissa, Blida-Joinville (2018-19): A newly commissioned large-scale installation and series of workshops that activate a now disused kindergarten in Kalba. Blida-Joinville (2019) plots a physical and psychological exploration of society through consideration of architecture and rational thought. The artist brings into conversation two institutions and their histories by constructing a three-dimensional wooden structure based on the plan view of the Psychiatric Hospital Frantz Fanon in Blida, Algeria and imposing it on the existing structure of the Kalba kindergarten. The hospital was built in the 1930s by French architects Garner et Petit, and the kindergarten was designed by Arab modernist architects George Rais and Jaafar Tukan and built between 1973 and 1975. Bourouissa approaches the institutions of psychiatric hospital and school through philosopher Michel Foucault’s concept of heterotopia, which is used to describe spaces that are somehow parallel but ‘other’ and tied to notions of utopia, either through modelling of an ideal space or the corralling of the unwanted to make that aspiration impossible. Plants in open-air spaces that are interspersed throughout the kindergarten recall the memory of Bourlem Mohamed, a patient of the Fanon hospital who developed a gardening method as a form of therapy. Bourouissa has also conceived of workshops for students from Kalba, inviting them to graffiti images of local plants onto the kindergarten walls, thereby transposing Mohamed’s spirit and linking two institutions of care and instruction.

Shezad Dawood, ‘Encroachments’ (2019): An immersive virtual reality (VR) experience and installation, that explores the ‘grey area of ownership’ and attendant ideas of sovereignty, private property and the politics of space in Lahore and Karachi. The term ‘encroachments’ refers to the backlash against so-called ‘illegal structures’ built into and onto existing private and state infrastructure. These structures underscore the lack of social space within rubrics of private and public land ownership and the insufficiently served needs of the entire population. A central element of the VR experience is the proposed building for the US Embassy in Karachi, which Dawood has spent years extensively researching. Designed by architect Richard Neutra in the 1950s, the building now exists in a state of limbo. It was completed after Pakistan moved its capital to Islamabad and then required constant upgrades to meet evolving US diplomatic security standards until it was sold by the US State Department in 2014. On the VR journey to, and onward from, the ‘embassy’, viewers pass through various parallel environments such as Ferozsons in Lahore, a renowned colonial-era bookshop established in 1894; a secret passage into the Reagan years; and a videogame arcade replete with anti-Soviet propaganda. Each stylistically distinct scene recalls a gaming genre and is punctuated by a different sound track from the late-1960s Pakistani niche music scene of mixed Muslim and Christian musicians, who drew inspiration from classical Indian ragas and the layered sound pioneered by Phil Spector and Brian Wilson. The VR work is presented within the context of Dawood’s signature textiles and custom-designed wallpaper of digital terrazzo patterns, which reference the ubiquitous use of low-grade terrazzo in Neutra’s US Embassy, 1980s gaming arcades and other places in Pakistan.

Phan Thảo Nguyên, Mute Grain (2019): An examination of the little discussed 1945 famine in the Red River Delta of French Indochina under Japanese occupation (1940–1945). In this area in the north of Vietnam, over two million people died of starvation, partly due to Japanese demands to grow jute over rice to support their war economy. Told from the perspective of two adolescents, Mute Grain weaves together To Hoai’s prose account of the famine, oral histories from Hanoi’s Revolutionary Museum recorded by historian Van Tao and mystical elements from Vietnamese folk tales and lyrical chronicles that recall Japanese post-war writer Yasunari Kawabata’s Palm-of-the-Hand Stories. The work revolves around a young woman named Tám, who becomes a hungry ghost unable to move to the next life, and Ba, who anxiously searches for his sister. Ba (March) and Tám (August) represent the poorest months of the lunar calendar, when farmers once borrowed money and worked side jobs to sustain themselves. Scenes featuring the protagonists are interspersed with those of the Red River Delta landscape and ‘sentry- boxes’, French Indochina-era transit hubs that connect paddy field to village. The sentry- boxes bear witness to histories of famine and the Communist violence of the land-reform- subsidy era (1954–1975), which politically divided Vietnam. Although not prohibited or taboo, official history rarely includes the 1945 famine, crop failures during French agricultural reform or the devastating typhoons and floods that left millions destitute during this period.

Qiu Zhijie, Various works (2015-19): A large selection of colour prints and scrolls based on his ink works that trace wide-ranging connections across geography, history and culture. A selection of maps—Map of Games: Used to Being a Loser (2016), Map of Human Emotions: Both Despair and Hope Are Extinct Volcano (2016) and Map of Fate: Heaven’s Movement Is Ever Vigorous (2016)—charts the psychogeographies of the human condition while another map ventures off the wall, surveying the connections between Chinese and Arab historical exchange and encounters. All reveal Qiu’s interest in the uncharted, demonstrating his belief that art, and therefore life, must bear the labour of imagination and openness. Thinking through the boundaries of cartography, Qiu goes beyond the discipline itself (its mapping of control, study and conquest), employing these inked studies to expose alternate windows of learning about human action, its production and its interconnected and interdependent manifestations.