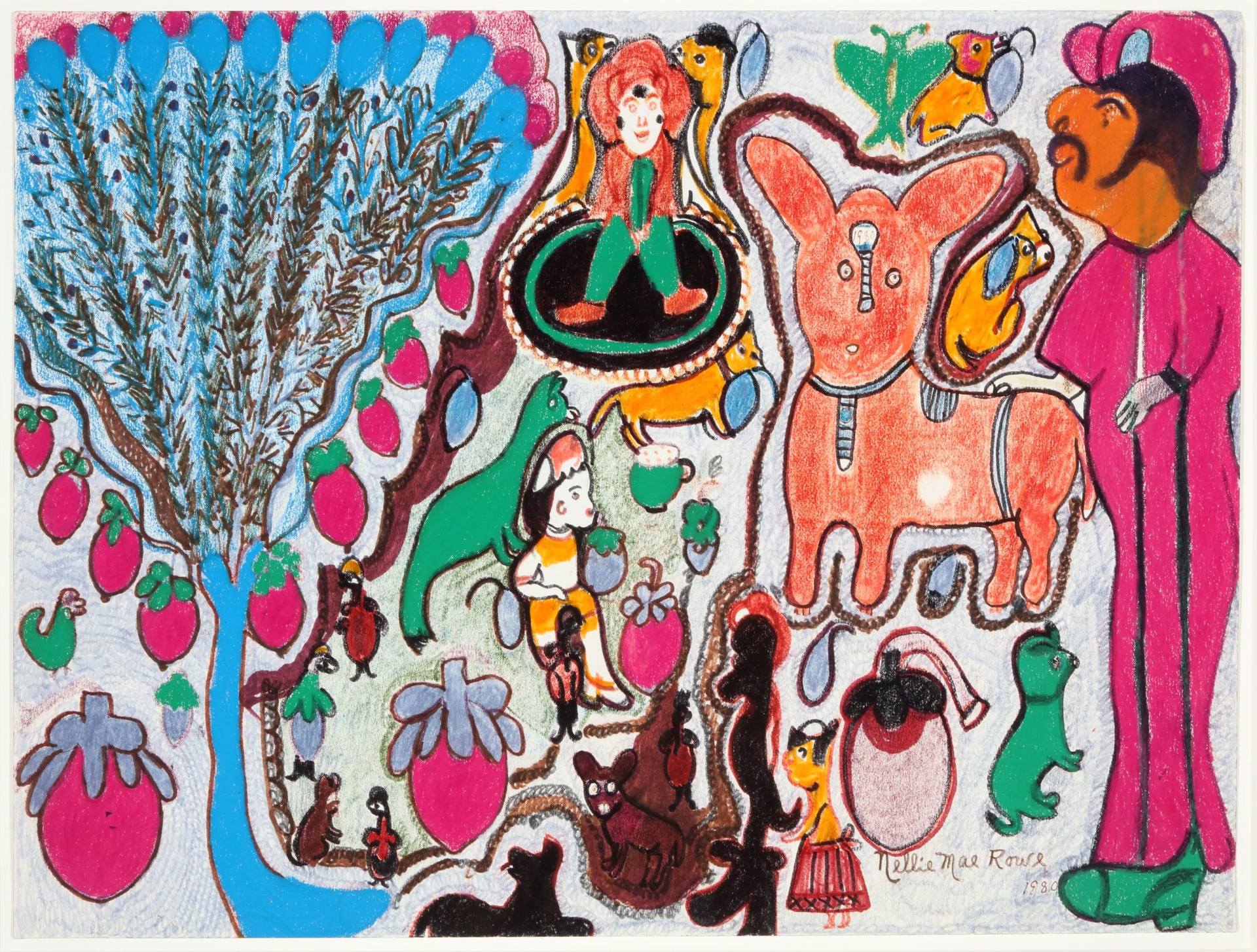 The High Museum of Art continues to expand its unparalleled collection of American self-taught art with a gift of 47 works by Southern self-taught artists from Atlanta collectors Harvie and Charles (“Chuck”) Abney. The paintings, sculptures and drawings, which will be followed by 26 works to be bequeathed to the High, are by more than a dozen of the most widely celebrated self-taught artists, including Lonnie Holley, Howard Finster, Ronald Lockett and Minnie Evans. The gift also includes one of the largest and finest private collections of work by Atlanta artist Nellie Mae Rowe, which will strengthen the Museum’s already unmatched holdings of her work.

“Without question, this gift underscores the international importance and distinction of our folk and self-taught collection – in particular, by further highlighting the remarkable contributions of Southern artists,” said Rand Suffolk, the High’s Nancy and Holcombe T. Green, Jr., director. “We are immensely thankful to the Abneys for their steadfast support of the Museum and for recognizing our commitment to this important work with this generous donation.”

Longtime Atlantans and supporters of the High, the Abneys shared this love of art with their two children, including their son Charles Abney III, who served as the Museum’s board chair from 2015 to 2019 and is a current board trustee.

The Abneys were ahead of the curve in their interest in self-taught artists and began their collection locally. Chuck Abney recalled, “Here in Atlanta, in the late 1970s, we were exposed to the works of African American self-taught artists at the Judith Alexander Gallery. As early collectors, we had access to the best of this art. Our first purchase in 1980 was a Nellie Mae Rowe drawing from the Alexander Gallery, and our last was a Ronald Lockett collage in 2019 from Christie's Auction House in NYC. A lot of fun happened in between!”

Although many great artists comprise the Abney collection, Rowe, in addition to being the first artist they collected, is also the most well represented, with 17 works coming to the High. The Museum’s upcoming exhibition and publication “Really Free: The Radical Art of Nellie Mae Rowe” (Sept. 3, 2021-Jan. 9, 2022) will draw upon the High’s leading collection of Rowe’s work — which includes the Abneys’ gift and bequest and now exceeds 200 drawings and mixed-media sculptures — to form the first major presentation of her work in more than two decades.

“Chuck has a studied eye when it comes to Rowe’s work and has been able to represent some of her most important themes and symbols in his collection, so I am elated that the Abneys chose to make their gift in time for our forthcoming publication and exhibition on Rowe,” says Katherine Jentleson, Merrie and Dan Boone curator of folk and self-taught art.

In addition to the Rowe drawings, the Abneys collected significant groups of work by other women self-taught artists who are often underrepresented. The gift and bequest include eight works by Evans, who translated her spiritual visions and experiences working outside of the Airlie Gardens in Wilmington, North Carolina, into stunning arabesques flowing with plant and animal forms and other mysterious designs. Also featured in the gift are three sculptures by Bessie Harvey, the Tennessee artist who transformed naturally occurring wood forms into fantastical beings.

In addition, the gift includes drawings by Juanita Rogers, Henry Speller and J.B. Murray that supplement the High’s existing holdings by those artists and strengthen the folk and self-taught art department’s collection of works on paper. Three Lockett works, including a panel from his “Oklahoma” series, made in response to the Oklahoma City bombings, add to the High’s major holdings of his work. A 2016 mixed-media assemblage by Alabama-born and Atlanta-based artist Holley is the most recent of his works to enter the collection. Other Atlanta artists featured in the gift include Archie Byron, the city’s first Black private investigator, who made his sculptures and bas reliefs from sawdust, and John R. Mason, whose exuberant drawings are new to the collection.

About the High’s Folk and Self-taught Art Department

The High began collecting the work of living self-taught artists in 1975 and was the first general interest museum to establish a dedicated department for folk and self-taught art in 1994. Today, the Museum boasts one of the most significant collections of American folk and self-taught art in the world, which is especially rich in artworks by Southern and African American artists. Milestones in the department’s collection history include the Museum’s 1982 acquisition of 30 drawings by the then relatively unknown artist Bill Traylor; a 1994 collaboration with Howard Finster that made the High the largest public repository of his work outside of Paradise Garden; Judith Alexander’s 2003 gift of 130 works by Atlanta artist Nellie Mae Rowe; and a 2017 gift-purchase with the Souls Grown Deep Foundation, which added 54 works that further acknowledged the High’s leadership in Southern self-taught art. Although known for its unparalleled holdings of work by Southern masters like Traylor, Finster, Rowe and Thornton Dial, the High also holds major works by self-taught artists who worked outside of the South, including Henry Church, William Hawkins, Martín Ramírez and Henry Darger.