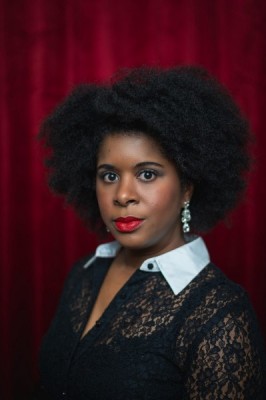 All-female cast & crew present opera
inspired by the life of Swiss explorer and writer
May 21 at 2 p.m. & 7 p.m. ET

The August Wilson African American Cultural Center (AWAACC) announced today that Amanda Van Story will star in the upcoming adaptation of SONG FROM THE UPROAR: THE LIVES AND DEATHS OF ISABELLE EBERHARDT, the first Black woman to perform in the lead role. The chamber opera, the premiere work produced in the AWAACC B.U.I.L.D. (Build, Utilize, Inform, Lead, and Develop) program, tells the only-in-the-movies, boundary-breaking life story of Swiss explorer and writer, Isabelle Eberhardt, who traveled to and lived in Algeria disguised as a man, survived an assassination plot and suicide pacts, only to succumb to a desert flood.

Featuring an all-female cast, SONG FROM THE UPROAR is composed by Grammy nominated Missy Mazzoli with a libretto by Royce Vavrek and Mazzoli, direction by Risikat “Kat” Okedeyi, and conducted by Fernanda Lastra, who also serves as musical director. SONG FROM THE UPROAR is the first work produced by B.U.I.L.D. artist-in-residence DEMASKUS Theater Collective, led by Shaunda Erikka McDill, a Pittsburgh-based national service-oriented collective, and is presented in collaboration with Kassia Ensemble, a non-profit chamber music group composed exclusively of women. Performances at the non-profit AWAACC take place Saturday, May 21 at 2 p.m. and 7 p.m. ET. Zuly Inirio of the Afro-Latinx Song and Opera Project serves as the understudy for the production and will perform in the lead role during the matinee performance. The program runs approximately 80 minutes with no intermission. Tickets, starting at $32.25, are accessible at www.awaacc.org or by phone at 412-456-6666. An opening reception and meet and great with the opera’s cast and crew, as well as members of both Kassia Ensemble and DEMASKUS Theater Collective, which is free and open to the public, will take place on Thursday, May 19 at 6 p.m. ET.

Inspired by the salvaged journals of the early twentieth-century explorer, SONG FROM THE UPROAR has been hailed “a captivating multimedia spectacle” by The New York Times. At age 21, after the death of her father, mother, and brother in quick succession, Eberhardt traveled alone to Algeria. She dressed as a man, converted to Islam, joined a Sufi order, roamed the desert on horseback, and fell in love with an Algerian soldier. After surviving an attempted assassination and a failed suicide pact with her lover, she drowned in a desert flash flood at age 27. This new production uses the migration, resistance, and the fortitude of Black women as its focuses, and looks at how universal Isabelle’s story is to any woman who wants to live as her authentic self while facing the realities of the constraints placed on her by society.

“Song from the Uproar tells an amazing story of a woman who would not be held back by society, and with the incredible Amanda Van Story leading this production, we are uplifting the countless talented female artists and creative leaders in the performing arts who continue to be underrepresented and overlooked,” said AWAACC President and CEO Janis Burley Wilson. “The August Wilson African American Cultural Center has long been dedicated to celebrating Black artists and championing innovators in the arts, and I’m thrilled that through the inaugural B.U.I.L.D. residency at the Center, Shaunda Erikka McDill and her team have created an exciting production of Song from the Uproar for the people of Pittsburgh.”

“When DEMASKUS began the B.U.I.L.D. residency program over a year ago, we were committed to bringing unique stories that resonated within the local Pittsburgh community and beyond. Not only is Isabelle Eberhardt’s fascinating journey largely unknown, performing it with an all-female cast and production team featuring a historic performance of the first Black woman to lead the role, we hope to uplift and inspire all who experience the work at the Center,” said Shaunda Erikka McDill, Founder and Executive Producer of DEMASKUS Theater Collective. “I am truly grateful to the Center for their support through this residency, and to Missy Mazzoli for trusting us with this re-imagined version of her work. This opportunity has allowed us to bring together incredible women from Pittsburgh and across the nation to make our original vision a reality.”

AWAACC’s two-year B.U.I.L.D. residency program, launched in April 2021, is dedicated to supporting Pittsburgh-based emerging artists of color and creating a platform for diverse artists and organizations that have historically received unequal access to funding and resources for the development of new work. Performing arts producer, curator, and consultant Baraka Sele serves as the program’s lead producer. In addition to DEMASKUS, Pittsburgh-based visual artist, photographer, and filmmaker Emmai Alaquiva is also developing work as part of the inaugural residency term. Major funding for the program is generously provided by the Richard King Mellon Foundation.

Co-producer and Pittsburgh-based performance ensemble Kassia Ensemble strives for more inclusive gender and racial representation in the world of chamber music. The Ensemble achieves this by promoting women’s entrepreneurship and leadership in the arts, collaborating with artists of all genres and performing music by composers of all genders as well as diverse ethnicities. The seven-member ensemble is composed of the traditional string quartet, double bass, clarinet, and harp. Kassia members hold positions in the Pittsburgh Opera and Ballet orchestras, the West Virginia Symphony, the Wheeling Symphony, and the Erie Philharmonic. Guest musicians joining Kassia Ensemble for this special production include BJ Miller (piano); Brittany Trotter (flute); Mila Shadel (electric guitar); Ryellen Joaquim (viola); and Tiffany Freeman (bass).

In addition to the one-act opera, the evening will feature the premiere of Kassia by Judith Shatin. The unusual instrumentation of the Ensemble, consisting of string quintet, harp, and clarinet, performs for the first time as a complete septet in this video presentation linked to the history of opera in Pittsburgh and serves as an introduction to Songs from the Uproar. Kassia, the namesake of the group and work, was a ninth-century Byzantine abbess, poet, and hymnographer, and is likely the first woman whose music has survived until now. Shatin draws on melodic fragments of two of Kassia’s major chants, “The Fallen Woman” and “Augustus, the Monarch.” The music opens gently then builds to crises of torment, resolving to dreams of a world beyond. This project was made possible with funding from the Sparkplug Foundation and Opportunity Fund of Pittsburgh.

Finally, a special, one-night-only performance of "Free Within Ourselves: Phenomenal Women'' will be performed by Duquesne graduate student, Candace Burgess as part of the opening reception on Thursday, May 19 at 6 p.m. ET. "Free Within Ourselves: Phenomenal Women'' is a multimedia program focused on celebrating the lives and legacies of African Descended female classical composers and arrangers by showcasing selected vocal works of Maud Cuney Hare and Cynthia Cozette Lee.

AWAACC is one of the largest non-profit cultural organizations in the country focused exclusively on the African American experience and the arts of the African diaspora. The organization is a leader in presenting programming that reflects the diversity of Pittsburgh and the nation. In addition to the two-year B.U.I.L.D. residency, this month, AWAACC unveiled August Wilson: The Writer’s Landscape, the first-ever exhibition dedicated to the life and works of the Pulitzer Prize-winning playwright. Spanning close to 4,000 square feet, the multisensory exhibition explores Pittsburgh, where Wilson was born and raised, and which had a profound impact on shaping his worldview and inspiring his unprecedented 10-play American Century Cycle. To learn more about the August Wilson African American Cultural Center and its year-round activities, please visit https://awaacc.org.