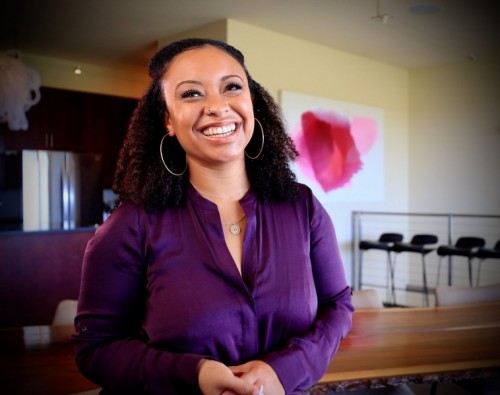 Inaugural Exhibition to Feature Works in Collaboration by Multidisciplinary Artists Li Harris and Alisha B. Wormsley, on view April 8 – August 28, 2022

The August Wilson African American Cultural Center (AWAACC) announced today that it will rename the 1839 Gallery The Victoria Gallery in honor of Victoria Renée Edwards, who was instrumental in developing August Wilson: The Writer’s Landscape, the first-ever permanent exhibition dedicated to the life and works of Pulitzer Prize-winning playwright August Wilson. As part of her work with Eisterhold Associates Inc., Ms. Edwards designed the exhibition and managed the project in concert with AWAACC and Constanza Romero-Wilson, Executive Director of the August Wilson Legacy LLC, and Chief Curator to the exhibit. Ms. Edwards passed away due to complications from Covid-19 while in the final stages of the exhibition design and installation. The gallery will be dedicated in her memory on Thursday, April 14, prior to the opening of August Wilson: The Writer’s Landscape on Saturday, April 16.

“We were deeply saddened by the loss of our colleague and friend Victoria Renée Edwards, and the August Wilson African American Cultural Center is honored to rename The Victoria Gallery in recognition of her groundbreaking work as the founding Lead Exhibition Designer for August Wilson: The Writer’s Landscape,” said Janis Burley Wilson, President and CEO of the August Wilson African American Cultural Center. “The space, inspired by her legacy of innovation and excellence, aims to illuminate Black futurist creativity now and evermore.”

Ms. Edwards, a Philadelphia-native and alumna of the city’s University of the Arts, where she received her Master of Fine Arts degree in museum exhibition design and planning; and Drexel University, where she received a Bachelor of Science degree in graphic design. She served as an exhibition designer with Eisterhold Associates Inc., a leading design firm whose work includes the Rosa Parks Museum in Alabama, the Harry S. Truman Presidential Library & Museum in Missouri, and the African American Museum in Philadelphia. Prior to 2019, Ms. Edwards worked as an exhibition and production designer as well as graphic designer for a range of organizations including The Colored Girls’ Museum in Philadelphia; the Smithsonian National Museum of American History in Washington, D.C.; and the Materials Science and Engineering College of Drexel University. She was also actively involved in community programs in Philadelphia, including Jack and Jill of America, Incorporated; Germantown Christian Assembly; and the Germantown Academy.

The Victoria Gallery, presented by Comcast, will open with a collaborative exhibition entitled A Way to AFRAM from multidisciplinary artists Li Harris and Alisha B. Wormsley on Friday, April 8. AFRAM, defined by the artists as an inner space reality where Black people can dream, build, transform, and be, is the starting point for the artists’ exhibition, as their work merges the research of Harris and Wormsley and imagines the various technologies and applied sciences to continue the ancestral practice of creating safe places for Black people on this planet and beyond. Through their work, Harris and Wormsley establish a series of portals through site-specific field work in international and national topographical locations. Together they document their ethereal excavations and travels to South America, East Africa, and various sites within the United States. Their works also include learnings from experimentations with sound, frequency, and choreographic performances on how to activate AFRAM and share its successes. The exhibition, on view through August 28, 2022, is free and open to the public, with a virtual opening conversation with the artists on April 13 at 5:00pm EST on Instagram live.

Li Harris is an independent and interdisciplinary artist, filmmaker, performer, composer, researcher, writer, and educator from Houston, Texas. Through her work she explores the relationships between body, land, spirit, and place, with a concentration on healing in performance and living. Alisha B. Wormsley is an interdisciplinary artist, cultural producer and the Creative Director of Sibyls Shrine, an artist residency program rooted in support for Black mothers. Her work focuses on collective memory and the synchronicity of time, specifically through the stories of women of color.

In addition to A Way to AFRAM, AWAACC will also open Select Works in the Benter Gallery on Thursday, April 14 with a special artist talk at 7:00pm EST. The exhibition, which is free and open to the public, features a series of Pittsburgh-based artists works on paper exploring identity, history, iconography, and cultural narratives through screen prints, collage assemblage, and paintings. On view through August 28, 2022, Select Works features works by Tara Fay Coleman, Robert Hodge, Dail Chambers, D.S. Kinsel, Bekezela Mguni, and Quaishawn Whitlock.

August Wilson: The Writer’s Landscape
Born and raised in Pittsburgh’s Hill District, August Wilson drew his greatest inspiration from the city and its people. Many of his works in the American Century Cycle, which almost exclusively take place in Pittsburgh and represent each decade of the 1900s, were largely informed by Wilson’s observations of the environment that surrounded him.

To bring Wilson’s story to life, August Wilson: The Writer’s Landscape will guide visitors through an interactive experience of the American Century Cycle, and will showcase the universal themes the prolific playwright tackled and the enduring relevance of his work through reproductions and artifacts from Wilson’s life and notable productions of his work; elements that invite patrons to address the issues of race, representation, family, and community; and interactive digital components that showcase each play in the American Century Cycle. The Wilson experience will unfold in three acts that include “The Coffee Shop,” inspired by a local coffee shop in the Hill District, where a young Wilson frequently went to observe the day-to-day interactions of its diners and which subsequently provided the basis for many of his characters and the inspiration for his storytelling; “The Office,” a replica of Wilson’s home office that will showcase his working environment and items that he prized; and “The Street,” a symbolic walk through Wilson’s American Century Cycle, that will feature a section dedicated to each of Wilson’s ten plays, utilizing video, props, and costumes from notable Broadway productions of his work; and will provide insights on the decades they are set in and events that took place in Pittsburgh and across the nation at those times. To learn more, please click here.

ABOUT AUGUST WILSON AFRICAN AMERICAN CULTURAL CENTER
The August Wilson African American Cultural Center is a non-profit cultural organization located in Pittsburgh’s cultural district that generates artistic, educational, and community initiatives that advance the legacy of Pulitzer Prize-winning playwright August Wilson. One of the largest cultural centers in the country focused exclusively on the African American experience and the celebration of Black culture and the African diaspora, the non-profit organization welcomes more than 119,000 visitors locally and nationally. Through year-round programming across multiple genres, such as the annual Pittsburgh International Jazz Festival, Black Bottom Film Festival, AWCommunity Days, TRUTHSayers speaker series, and rotating art exhibits in its galleries, the Center provides a platform for established and emerging artists of color whose work reflects the universal issues of identity that Wilson tackled and which still resonate today.