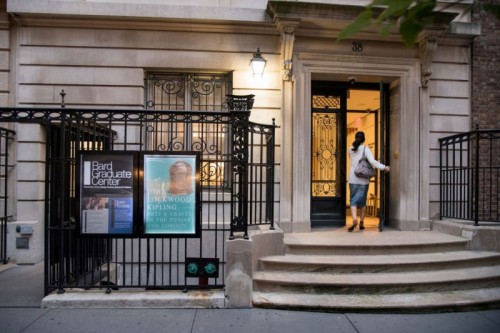 Deborah and Philip English have been devoted to supporting the arts for many years, both through philanthropy and the development of significant collections. The Englishes’ impact is felt most strongly in their hometown of Baltimore, where they have each served on the boards of major cultural institutions, including the Walters Art Museum, the Baltimore Symphony Orchestra, and Baltimore Ballet. As an extension of their passion for majolica, both are also active on the board of the Majolica International Society, and Deborah has established the Marilyn Karmason Majolica Library, which houses an image database holding nearly sixteen thousand entries featuring Victorian Majolica and related materials. Recently, the couple made a $2.5 million gift to establish the Deborah and Philip English Curator of Decorative Arts, Design, and Material Culture and committed to donating more than 500 objects of majolica to the Walters Art Museum. They have played a major role as sponsors, lenders, and promoters of the Majolica Mania exhibition organized by Bard Graduate Center and the Walters Art Museum.

Dr. Helen C. Evans recently retired from the Metropolitan Museum of Art, where she served as Mary and Michael Jaharis Curator of Byzantine Art. Her exhibitions include The Glory of Byzantium; Byzantium: Faith and Power (named best exhibition of the year by the College Art Association); Byzantium and Islam: Age of Transition (its catalogue was named best new book in Islamic studies by Iran’s Ministry of Culture); and Armenia! She also conceived the installation of the Sacristy Museum at the Monastery of St. Catherine at Sinai, Egypt, and organized Philippe de Montebello Years: Curators Celebrate Three Decades of Collecting. Evans is a fellow of the Medieval Academy of America and serves on the boards of the Mary and Michael Jaharis Center for Byzantine Art and Culture (chair), the American Associates of the St. Catherine Foundation, and Images: A Journal of Jewish Art and Culture. In 2020, the Armenian General Benevolent Union established a scholarship in her honor for students of Armenian art, art history, and the early church. She holds a PhD from the Institute of Fine Arts, NYU, and a BA with honors from Tulane University.

Dr. Anne Lafont is a professor at the École des hautes études en sciences sociales in Paris. A specialist in eighteenth- and nineteenth-century art and visual culture in the transatlantic world, her interests include early modern art and the material culture of France and its colonial empire, as well as contemporary art, Blackness, and diasporic Africa. She has published extensively on art and knowledge in imperial contexts, artistic historiography, and gender issues. Now she is researching the invention and making of African art in the early modern period. Lafont’s books include L’artiste savant à la conquête du monde moderne; 1740, un abrégé du monde—Savoirs et collections autour de Dezallier d’Argenville; and L’art et la race: L’Africain (tout) contre l’œil des Lumières, which received the Prix Littéraire Fetkann Maryse Condé and Prix Vitale et Arnold Blokh. She recently received a fellowship from Villa Albertine (Cultural Services of the French Embassy in the United States), and she currently serves as Robert Sterling Clark Visiting Professor at Williams College.

In 1985, a serendipitous visit to an estate sale and subsequent purchase of forty garden statues led Barbara Israel to found Barbara Israel Garden Antiques. After 36 years in business, she is recognized as an authority on the subject. Her exhaustively researched book, Antique Garden Ornament: Two Centuries of American Taste, is the definitive work in the field. Israel is also the author of A Guide to Buying Antique Garden Ornament, a user-friendly handbook packed with tips on conservation, identification, and more. She has served as a consultant to the Metropolitan Museum of Art and the Smithsonian Institution for their collections of nineteenth-century cast iron, and she has sold pieces to the Winterthur Museum, Smithsonian Institution, and Baltimore Museum of Art, as well as to many important private collectors. As an active board member of the Untermyer Gardens Conservancy, Barbara is devoted to preserving historic gardens and their antique garden ornament.

About the Iris Foundation Awards

The Iris Foundation Awards were created in 1997 to recognize scholars, patrons, and professionals who have made outstanding contributions to the study and appreciation of the decorative arts and thereby help to sustain the cultural heritage of our world. The Awards are named for Bard Graduate Center Founder and Director Susan Weber’s mother, Iris Weber. Proceeds from the Iris Award event fund graduate student scholarships and fellowships. For more information, call 212-501-3058 or email support@bgc.bard.edu.

As the leading research institute in the United States dedicated to the study of decorative arts, design history, and material culture, Bard Graduate Center has pioneered the study of objects as a means to better understand the cultural history of the material world. Offering experiences for scholars, students, and the general public alike, Bard Graduate Center is built on multidisciplinary study and the integration of research, graduate teaching, and public exhibitions.

Since its founding in 1993, BGC has established a network of more than 400 alumni who work in leading museums, universities, and institutions worldwide to advance new ways of thinking about material culture.