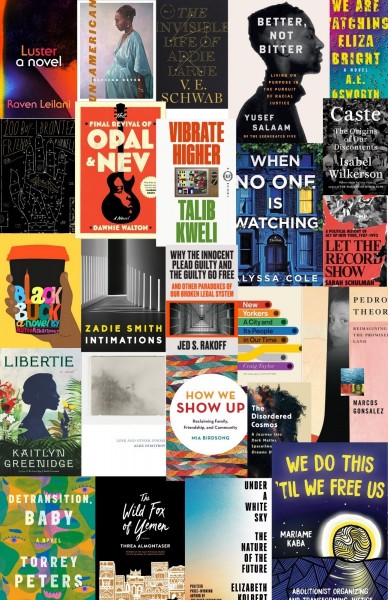 Brooklyn Public Library announced today the longlists for the 2021 Brooklyn Public Library Literary Prize for fiction/poetry and nonfiction. The Prize recognizes writing that captures Brooklyn’s spirit and reflect the borough, one of the most socially and culturally diverse communities in the country. The prize is selected by both librarians and library staff, drawing on their broad knowledge of literature, contemporary writing, and the many populations they serve. A complete list of longlist titles, including fiction and nonfiction, follows below.

Members of the selection committee serve communities from Red Hook to Gerritsen Beach and specialize in fields ranging from adult literature to historical collections. With 60 libraries in every corner of the borough, the selection team was uniquely positioned to choose books reflecting Brooklyn’s many diverse neighborhoods.

“The Brooklyn Public Library Literary Prize celebrates contemporary writers and their greatest allies: librarians,” said Linda E. Johnson, President and CEO of Brooklyn Public Library. “This year, BPL librarians and library staff read across genre and a dazzling array of subjects from climate change to the cosmos. The longlist encourages readers to delve into our past and imagine a more equitable, more sustainable future.”

The longlist features work by 15 women, eight men, and one non-binary author. The selections include reflective essays, biographies, memoirs, historical analysis, and journalism, along with three books of poetry and nine novels. The nominated authors – in all categories – write about justice and gentrification, the cosmos and climate crisis, politics and identity, and a world changed after the pandemic in profound and thoughtful ways. With the city at the center, the nominated authors examine the extraordinary activism of ACTUP New York in the 1980s and 90s to this century’s terrorist attacks, hurricanes, and recessions.

In the fiction and poetry category, which includes seven debut authors, the borough itself is a central character in many of the works. A young woman makes her way in Reconstruction-era Brooklyn; another navigates her way through sexual partners and racial politics from a roommate-filled Bushwick apartment. A young man gets too comfortable in his mother’s Bedford-Stuyvesant brownstone eating her home cooking. A gentrifying Brooklyn neighborhood takes a sinister turn.

“This year's nominees are a love letter to New York in all its plurality and vibrance. The stories represented in our longlist books take us from 19th century Brooklyn to the disordered cosmos, to apartments in Bushwick and brownstones in Bed-Stuy,” said Librarian Michelle Montalbano, co-coordinator of the Literary Prize committee. “We spend time with trans women in Prospect Park, in the courtroom examining our broken legal system, and ask ourselves important questions about how we show up for our community, vibrate higher, live on purpose in the pursuit of transformative justice, and what the future could hold. By highlighting these exciting books from the past year and engaging more of our BPL colleagues in the process of selecting them than ever before, we hope to hold up a mirror to Brooklynites that truly reflects the diversity of their beloved borough.”

The Brooklyn Public Library Literary Prize was established in collaboration with the Brooklyn Eagles, a group of young and engaged Brooklynites who are passionate about Brooklyn Public Library and work to engage new patrons, promote the Library as a cultural center, and build a vibrant community around the resources the library offers. Winners of the fiction and non-fiction award will each receive a $5,000 prize. The short list will be announced in early fall with winners selected in November.

How We Show Up: Reclaiming Family, Friendship, and Community (Hachette Go)
By Mia Birdsong

We Do This ‘til We Free Us: Abolitionist Organizing and Transforming Justice (Haymarket Books)
By Mariame Kaba

Under A White Sky: The Nature of the Future (Crown, an imprint of Random House)
By Elizabeth Kolbert

Why the Innocent Plead Guilty and the Guilty Go Free: And Other Paradoxes of Our Broken Legal System (Farrar, Straus and Giroux)
By Jed S. Rakoff

Better, not Bitter: living on Purpose in the Pursuit of Racial Justice (Grand Central Publishing)
By Yusef Salaam

Let the Record Show: A Political History of ACT UP New York, 1987-1993 (Farrar, Straus and Giroux)
By Sarah Schulman

New Yorkers: A City and its People in Our Time (Norton & Company)
By Craig Taylor

Caste: The Origins of Our Discontents (Random House)
By Isabel Wilkerson

The Wild Fox of Yemen (Graywolf Press)
By Threa Almontaser

When No One is Watching (William Morrow, an imprint of HarperCollins Publishers)
By Alyssa Cole

Love and Other Poems (Copper Canyon Press)
By Alex Dimitrov

The Invisible Life of Addie LaRue (Tor)
By V.E. Schwab