Nonfiction Prize Awarded to Craig Taylor for
New Yorkers: A City and its People in Our Time 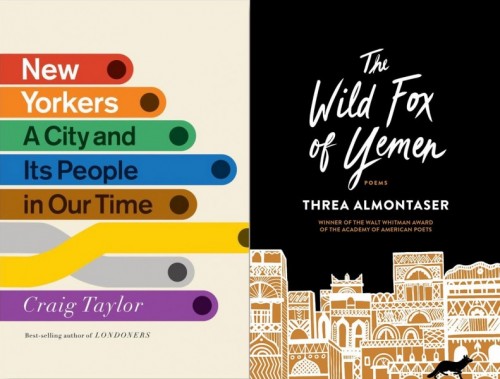 Brooklyn Public Library (BPL) has announced the winners of the seventh annual Brooklyn Public Library Literary Prize, awarding Craig Taylor the Nonfiction Prize for New Yorkers: A City and Its People in Our Time and Threa Almontaser the Fiction and Poetry Prize for The Wild Fox of Yemen. Selected by both librarians and library staff—drawing on their broad knowledge of literature, contemporary writing, and the diverse neighborhoods they serve—the Prize recognizes writing that captures the spirit of Brooklyn.

"Both winners of the 2021 Brooklyn Public Library Literary Prize bring our complex and beloved city to life on the page," said Linda E. Johnson, President and CEO of Brooklyn Public Library. "We applaud Threa Almontaser and Craig Taylor alongside all the nominees, as well as the librarians and library staff who champion literature in every neighborhood across Brooklyn."

In his landmark book titled New Yorkers: A City and Its People in Our Time, Craig Taylor depicts an indelible portrait of New York in the first 20 years of the 21st century. After moving to New York and spending years interviewing a diverse array of locals, from bodega cashiers and window cleaners to subway employees and hospital nurses, Taylor has compiled true tales of the uncelebrated people who propel New York forward each day.

“I spent many hours in Brooklyn public libraries all over the borough while researching and writing New Yorkers,” said Craig Taylor. “My book celebrates the cultural diversity of the city as well as the resilience of its people, so I’m thrilled to be the recipient of an award chosen by some of my favorite New Yorkers—librarians and library staff. Can any one book express all the dynamism, beauty, and drama of Brooklyn? No way. All we can do is try and capture a flash of that eternal, irrepressible Brooklyn spirit.”

A Yemeni-American author from New York City, Threa Almontaser’s debut collection of poetry, The Wild Fox of Yemen, explores the complexities of straddling two different cultures. Together, this collection tells the powerful narrative of a young Muslim woman navigating life in America post 9/11, while also serving as a love letter to the country and people of Yemen.

“I am more than grateful to be gifted an award by a library from my childhood. Being in association with a place that helped grow my imagination is the extra support I needed to continue my responsibility towards my communities, to keep each other lit and lifted during whatever comes for us,” said Threa Almontaser.

Librarians and library staff members working in BPL’s 60 branches nominated 53 books this year. The nominated authors—in both the fiction and nonfiction categories—address some of the most pressing issues facing Brooklyn and the world, such as immigration, race, gentrification, and climate change, among others. The selections reflect these important conversations around representation and inclusion, positioned in the context of one of the most diverse cities in the world.

In addition to Taylor and Almontaser, the 2021 shortlist nominees for fiction and poetry were Kaitlyn Greenidge for Libertie, Raven Leilani for Luster, and Torrey Peters for Detransition, Baby. The other shortlist nominees for the nonfiction category included Mia Birdsong for How We Show Up: Reclaiming Family, Friendship, and Community; Marcos Gonsalez for Pedro’s Theory: Reimagining the Promised Land; and Chanda Prescod-Weinstein for The Disordered Cosmos: A Journey into Dark Matter, Spacetime, and Dreams Deferred. To borrow one of the winning selections, click here.