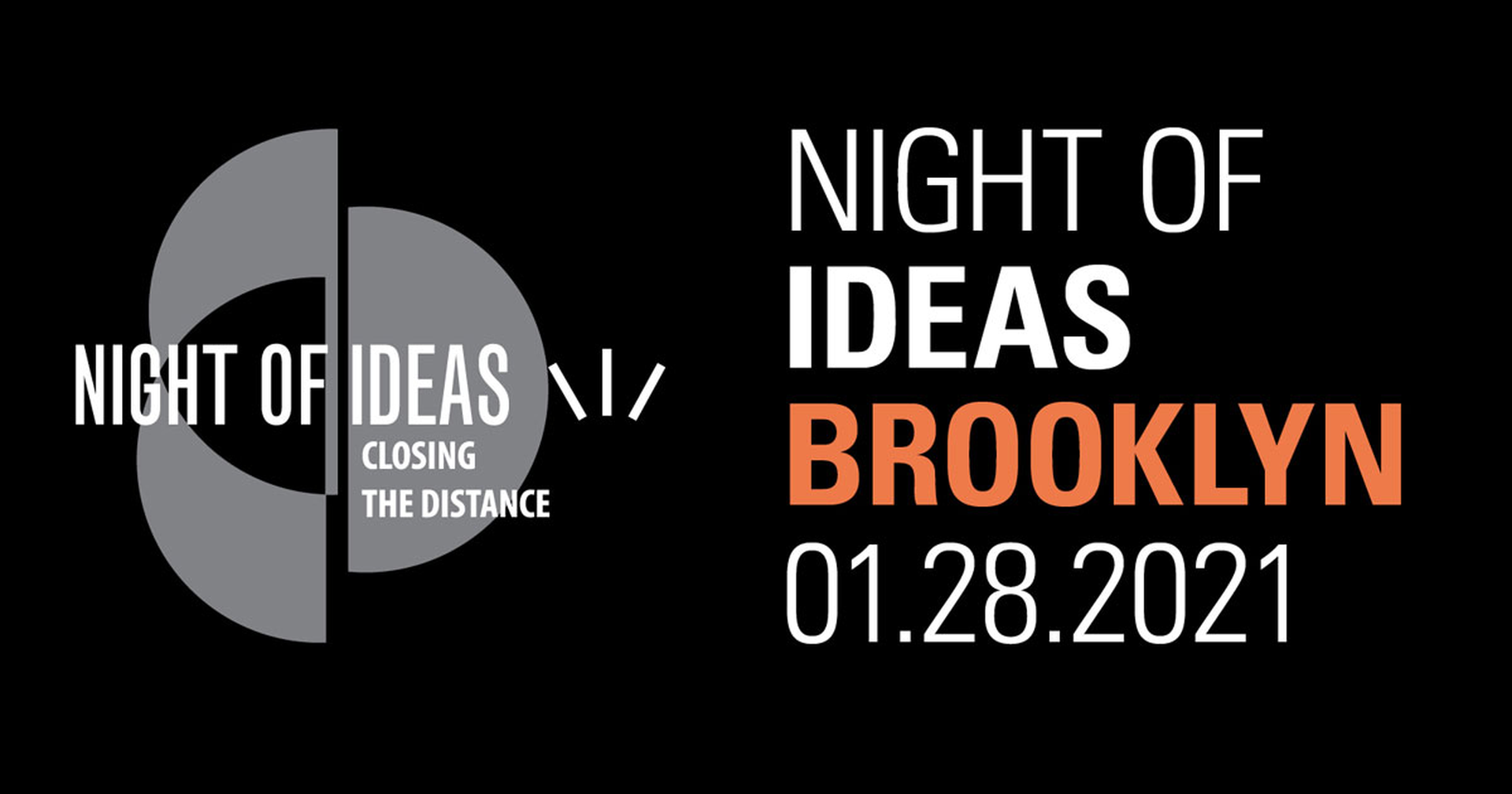 Marking the fifth year of collaboration between Brooklyn Public Library (BPL) and the Cultural Services of the French Embassy, the 2021 edition of Night of Ideas, previously titled A Night of Philosophy and Ideas, will bring together artists, writers, critics, historians, and philosophers from across Brooklyn and around the world for a six-hour exploration of today’s most pressing ideas, coordinated worldwide by the Institut Français.

Previously held from sundown to sunup in BPL’s historic Central Library on Grand Army Plaza, this year’s Night of Ideas will be streamed online for a global audience over a 6-hour period, with speakers and performers joining from around the world. The Brooklyn segment on January 28 will run from 6 p.m. EST to midnight featuring Ai Weiwei, Astra Taylor, Suketu Mehta, Nell Painter, Mona Eltahawy, Yuri Herrera, Hari Kunzru, Renata Salecl and others.

“At the start of a new year and a new chapter in American history, we hope that Night of Ideas acts as a platform for culturally engaged individuals across Brooklyn and around the world to come together and reflect on vital civil and artistic issues of our time, creating the kind of open community forum that is so difficult to find in this moment of social distancing and division,” said László Jakab Orsós, BPL’s Vice President of Arts and Culture.

The Brooklyn production became a city-wide sensation after launching in 2017, with more than 7,000 guests attending each year. By streaming the 2021 edition online, BPL further expands its mission to provide free high-caliber cultural programming in Brooklyn—and now, across the globe. The concept of the Institut Français’ global La Nuit des idées continues to expand, with editions streaming in 75 countries in 2021. This year’s theme is “Closing the Distance” (“Proches,” in French), which will address the shared global sense of isolation and consider ideas for fostering community amid today’s changing world in thoughtful and unexpected ways.

The Brooklyn event will open with artist Ai Weiwei in conversation with New York Times Opinion Editor Peter Catapano about ways in which artists can course correct for America looking forward. Following this, BPL will air an original short film featuring quintessential New York City artist and filmmaker Astra Taylor. In a nod to Taylor’s iconic film What is Democracy?, this segment features Taylor delivering an intimate monologue about what it means to offer solidarity in a city like New York City in this critical time and what wisdom the city has to offer the rest of the world.

BPL will also present This is America: Is This America? What is America?, a series of conversations exploring how the rest of the world views the United States a week following the inauguration of President Joe Biden. The question will be explored by an international panel including Egyptian-American journalist and activist Mona Eltahawy, British novelist Hari Kunzru, and Mexican political scientist and journalist Yuri Herrera.

In addition, BPL will present commissioned monologues around the theme What Awaits America? from writers and intellectuals including Pulitzer-nominated author Suketu Mehta, who wrote in his passionately informed defense of immigration to the United States, “We are here, because you were there.” Historian, author, and visual artist Nell Painter, Princeton University Edwards Professor of American History, Emerita; New York Times’ The Stone philosophy blog editor Peter Catapano; writer and psychotherapist Jamieson Webster; and Renata Salecl will also deliver monologues.

Performances include Iranian polymath and “software humanist” Ash Koosha with YONA, an auxiliary human singer-songwriter that generates lyrics and rhythms, and Emel Mathlouthi, whose protest song "Kelmti Horra" ("My Word is Free"), became an anthem for the Tunisian revolution and the Arab Spring, will give an intimate concert accompanying herself on guitar. The Brooklyn Art Song Society will also celebrate the Lieder of Franz Schubert.

Leading up to the event, a special edition of BPL’s Whispering Libraries program will start at Grand Army Plaza, featuring bicyclists with portable speakers playing curated playlists of notable philosophers and spoken literature, engaging audiences as they ride across the borough.

The night will also feature BPL Philosopher curator and author Ian Olasov and a series titled Truths to Live By, in which participants can share their personal philosophies.

The full Night of Ideas program and schedules can be found and streamed at: https://bklynlibrary.org/nightofideas

Night of Ideas kicks off BPL Presents’ Spring 2021 season, which will be officially announced in the coming weeks. The 2021 Night of Ideas is co-presented by Brooklyn Public Library and the Cultural Services of the French Embassy. The program is sponsored by a Humanities New York Action Grant through funds from the National Endowment of the Humanities and made possible with support from The Morris & Alma Schapiro Fund, and event partner National Sawdust. WNYC is a media partner of Brooklyn Public Library.

Night of Ideas Brooklyn is part of the U.S. Night of Ideas curated by the Cultural Services of the French Embassy and produced in connection with the worldwide La Nuit des idées, a project of the Institut Français, Paris. The 24-hour virtual philosophy marathon begins on January 28, 2021, and features events streamed from cities throughout the U.S. and more than 75 countries worldwide. Visit nightofideas.org for details.