Grave/Grove Opens at the CAC in September 2021 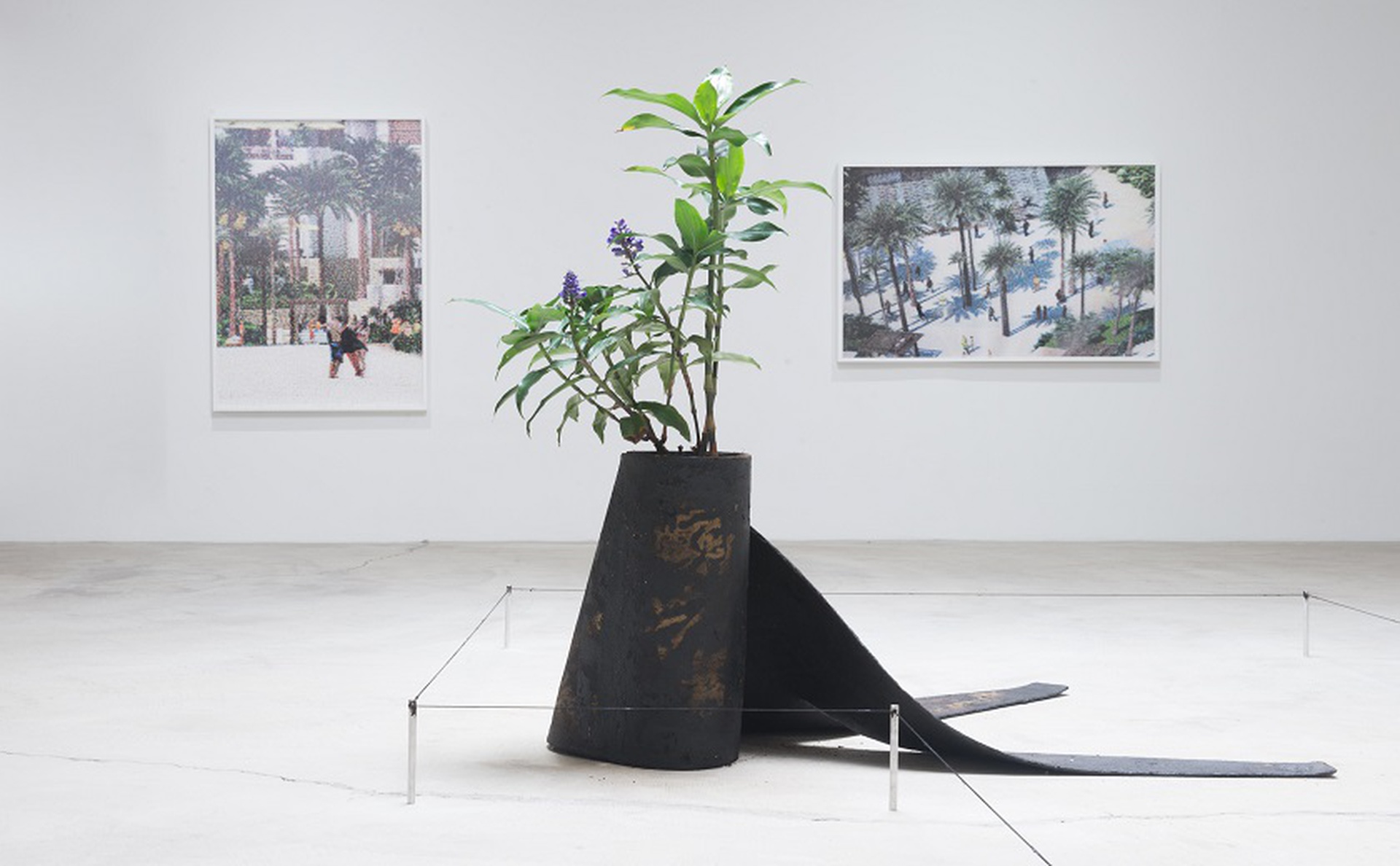 Grave/Grove examines the ways in which natural, political, and human time are interconnected. The exhibition reflects the artist’s interest in how shared spaces of growth and care, such as community gardens or nurseries, can be embedded within dehumanizing spaces of collective discipline and con-finement, such as detention centers or refugee camps. Curated by Amara Antilla, Senior Curator at the CAC, and Natalie Bell, Curator at the List Center, the exhibition opens at the CAC on September 17, 2021, and remains on view through February 27, 2022. The List Center will present a related exhibition from October 22, 2021, through February 13, 2022.

“We are excited to present this important new body of work by Sreshta Rit Premnath and delve deep-er into themes of agency, care, and resilience,” said CAC Senior Curator Amara Antilla. “Premnath’s exhibition asks us to consider the relationship between cycles of growth and political possibility and what it can reveal about ourselves and our world.”

Premnath creates works in sculpture, video, photography, and installation that draw on the formal legacies of minimalism and conceptualism to explore the politics of boundaries, bodies, and labor in contemporary life. The corrugated panels, cardboard, metal fencing, or cargo and freight materials that often compose his works are not merely convenient modular readymades, but the raw material that visibly indexes “development,” and the resulting consolidation of wealth. Recently, questions of space—who can own or occupy it—have guided Premnath’s work, as has the artist’s investigations of invisibility and misrecognition as part of the everyday experiences of those who are marginalized.

For his forthcoming exhibitions at the CAC and the List Center, Premnath has drawn inspiration from the role of gardening in the lives of incarcerated people or refugees. New installations in both exhibi-tions present a material exploration of life that exists in otherwise inhospitable spaces. Premnath’s new works incorporate live plants—species that are considered to be weeds. These weeds emerge from the gaps between aluminum panels, which are cut to the scale and shape of unfurled cardboard boxes. Within some of these sculptural assemblages, plaster-coated foam figures slump and lie to-gether, their “bodies” merging with the ground as they too become sites for growth. Others are sus-pended and attached to one another, finding balance and support as they submit to the force of gravi-ty. The flat metal box-like forms allude to the discarded commercial packaging often repurposed by those who lack permanent housing to create temporary places of rest. The use of plants that are typi-cally identified as “weeds” calls attention to the correspondence between horticultural and social sys-tems, and what, or who, is deemed undesirable, or subject to removal. As the artist observes, “Alt-hough humans categorize and ostracize some beings, nature proliferates without judgement.”

“Premnath’s works address the viewer with stark, sometimes abject forms and often operate on a scale that relates to human body,” said Natalie Bell, Curator at MIT List Visual Arts Center. “And yet in spite of their physicality, it can be hard to speak of what is most tangible or palpable because what is staged is often an absence—or a commentary on forms of erasure. In these new works, however, the presence of plants becomes an allegory for growth and resilience.”

The exhibitions at the CAC and the List Center will be accompanied by a special edition of the artist’s journal, Shifter 25: Waiting, co-edited by Premnath and Avi Alpert. The publication will draw from a series of eight virtual discussions that were convened by Shifter and co-hosted by the List Center and CAC in fall 2020 and spring 2021. The conversations featured artists, architects, historians, and theo-rists—including multidisciplinary artist Guadalupe Maravilla, filmmaker Kevin Jerome Everson, archi-tect Mustafa Faruki, and writer, curator, and professor Nicole Fleetwood—in dialogue about their own investigations into the condition of waiting.

Sreshta Rit Premnath (b. 1979, Bangalore, India; lives in Brooklyn, NY) is an artist and the founding edi-tor of Shifter, an issue-based journal featuring contemporary art, creative writing, and critical theory. His work has been the focus of solo exhibitions at Spaces, Cleveland (2007); Wave Hill, New York (2011); Contemporary Art Museum, St. Louis (2012); Nomas Foundation, Rome (2017); and the Contemporary Art Gallery, Vancouver (2019) among others. He has participated in group exhibitions including The Matter Within: New Contemporary Art of India, Yerba Buena Center for the Arts, San Francisco (2011); The Hollow Center, Smack Mellon, New York (2013); Common Space, The Kitchen, New York (2014); After Midnight: Indian Modernism to Contemporary India, 1947/1997, The Queens Museum, New York; So-Called Utopias, Logan Center for the Arts, Chicago (both 2015); Cartography of Ghosts, The Drawing Center, New York (2016); The Socrates Annual; Socrates Sculpture Park, New York (2017); L’Intrus Redux, Westfälischer Kunstverein, Münster (2019), and The Protest and the Recuperation, Wallach Gallery, Columbia University, New York (2021) among others. He holds a BFA from The Cleveland Institute of Art (2003) and an MFA from Bard College (2006). Premnath teaches at the Parsons School of Design in New York.

The Contemporary Arts Center is a catalyst for dialogue and discovery, driven by the art, artists and ideas of our time. Through an innovative slate of exhibitions, performances, educational and commu-nity programs and partnerships, the Contemporary Arts Center (CAC) provides opportunities for en-counter: with trailblazing artists both local and global, with cultural thought leaders, and with one’s own creative potential. Embedded in the fabric of its community and committed to lifelong learning, the CAC serves as an integral forum where people can reflect, create, collaborate, and connect around a more inclusive and sustainable culture of tomorrow.

Since its founding in 1939, the CAC has been a champion of emerging ideas in contemporary art, host-ing one of the first Midwest exhibitions of Picasso’s Guernica in 1939; mounting an early exhibition of Pop Art in 1963; representing the United States at the São Paulo Biennial in 1975; and presenting— and successfully defending—the 1990 Mapplethorpe retrospective that became a lightning rod in the era’s culture wars and propelled the CAC into the national spotlight. Today, the CAC occupies the Lois & Richard Rosenthal Center for Contemporary Art, the first museum designed by architect Zaha Hadid and the first U.S. museum designed by a woman.

As the contemporary art museum at MIT, the List Visual Arts Center is a creative laboratory that pro-vides artists with a space to freely experiment and push existing boundaries. The List Center presents a dynamic program of six to nine special exhibitions in its galleries annually, including a program of evolving site-specific work by emerging artists known as List Projects, as well as a broad range of edu-cational programs, events, and scholarly publications.

MIT established this center for the visual arts (originally named the Hayden Gallery) in 1950 to provide a dedicated structure upon which to build the institute’s existing relationship to the arts. In recognition of a gift from Vera and Albert List, it was renamed the List Visual Arts Center in 1985 and relocated that same year to its current, expanded location in the Wiesner Building, which was designed by MIT Alumnus I. M. Pei (B.S. Architecture, 1940) and Partners Architects.