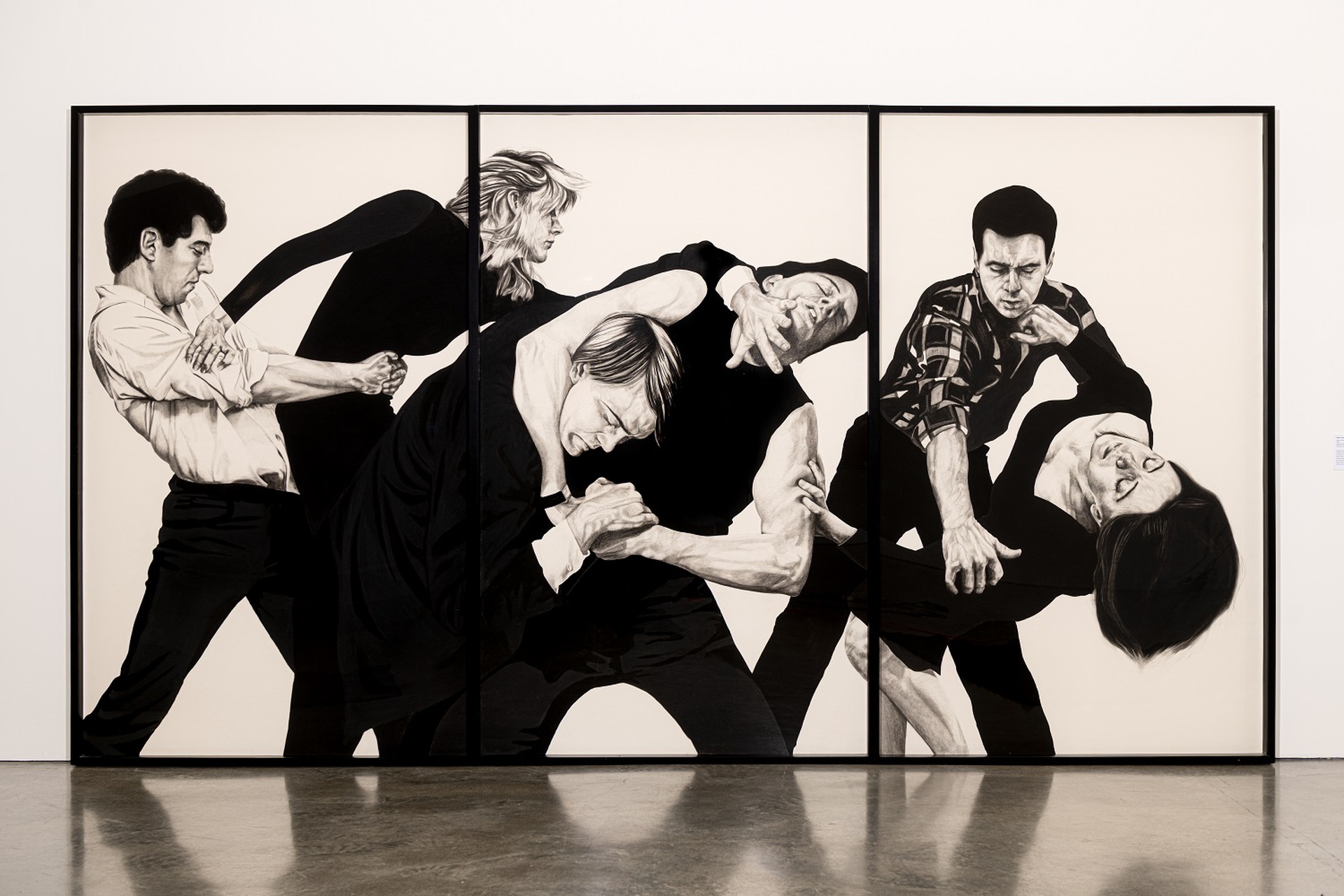 Established in 1990, CCS Bard is an incubator for experimentation in exhibition-making and the leading institution dedicated exclusively to curatorial studies—a discipline exploring the historical, intellectual, and social conditions that inform curatorial practice and exhibition-making. Throughout its 30-year history, CCS Bard has actively recruited perspectives underrepresented in contemporary art discourse and cultivated a student body representing a diverse spectrum of backgrounds in an effort to transform the curatorial field. CCS Bard provides unparalleled resources to its student body to support their studies, including the Marieluise Hessel Collection of Contemporary Art, comprised of more than 3,000 objects collected contemporaneously from the 1960s to the present day; CCS Bard’s exceptional archive of exhibition histories, curatorial papers, and rare catalogues; and the Hessel Museum of Art, a 17,000-square-foot facility that is home to the Hessel Collection as well as exhibitions curated by CCS Bard faculty, students, and guest curators from around the world. CCS Bard’s 30th anniversary year of programming builds on these resources and history to examine the latest ideas in contemporary art and curatorial practice.

A highlight of the year will be a series of celebratory events, currently planned for June 2021, that will honor Marieluise Hessel by bringing together CCS Bard alumni, artists, and other leading practitioners from across the field to explore the most urgent ideas in contemporary art.

“CCS Bard formed at a crucial time in the development of curatorial studies as a field and our program has striven throughout this time to anticipate and embrace cutting-edge ideas through its exhibitions, collections, programs, and curriculum,” said Tom Eccles, Executive Director of the Center for Curatorial Studies, Bard College and Founding Director of the Hessel Museum of Art. “Our position as a critical platform in the contemporary arts dialogue is due in no small part to the original vision and continued support of Marieluise Hessel, who remains an integral force in our community through her generosity and commitment to our program. It is only fitting that we mark CCS Bard’s 30th anniversary with exhibitions, programs, and a catalogue that honor Marieluise’s incomparable impact.”

“Our 30th anniversary has inspired us to reflect upon the incredible resources Marieluise has provided to CCS Bard,” added Lauren Cornell, Director of the Graduate Program and Chief Curator at the Center for Curatorial Studies, Bard College. “Marieluise’s incredible generosity and vision has allowed for the creation of a learning environment for curators like no other. Working with the Collection, Library and Archives, and with a luminary faculty, our graduate students are encouraged to rethink the curatorial field and to advance it through critical research and inventive exhibitions that chart new narratives in art and culture.”

As a core component of CCS Bard’s program, second-year students explore the Hessel Collection and conduct original research into emerging artists’ practices to mount individual exhibitions, while the first-year class works collaboratively to develop a single exhibition mining new aspects of the Hessel Collection. Often a platform for significant artists in the earliest stages of their careers, second-year thesis exhibitions in spring 2021 include the first-ever solo exhibition of young Brazilian artist Castiel Vitorino Brasileiro; an exhibition exploring the intersection of education and technology that provides a prehistory to our current moment of Zoom education; and a group show of performances by Jeremy Toussaint-Baptiste, Kameelah Janan Rasheed, and Steffani Jemison. The range of artists, movements, and themes explored in these thirteen individual exhibitions reflect the diverse backgrounds and perspectives represented by CCS Bard’s student body, and continue CCS Bard’s commitment to providing a platform for underrepresented voices to transform the curatorial field.

The first comprehensive catalog of CCS Bard co-founder Marieluise Hessel’s expansive and eclectic collection, this two-volume publication chronicles Hessel’s work collecting from artists and galleries from the 1960s through the present day while simultaneously charting the development of CCS Bard with the Hessel Collection at its core. The Marieluise Hessel Collection Volumes I & II examines the impact of Hessel’s collection—singular for both the range and eclecticism of its holdings as well as its position at the core of a curatorial studies graduate program—through essays by nearly fifty CCS Bard alumni including Cecilia Alemani, Ruba Katrib, Sohrab Mohebbi, Zeynep Öz, and Serubiri Moses, among others, in a fully illustrated, two-volume publication designed by Zak Group.

Closer to Life: Drawings and Works on Paper in the Marieluise Hessel Collection

Closer to Life is an exhibition of over 75 drawings and works on paper that span more than four decades of collecting by philanthropist Marieluise Hessel, who co-founded the Center for Curatorial Studies in 1990. As a reflection of Hessel’s expansive collection and the geographic trajectory of her life, from early years in post-war Germany to residence in Mexico City and on to New York City and the United States in the late ‘80s and early ‘90s, the exhibition is organized around these three spheres of influence that characterize the collection from origins to the present day, with works from a diverse range of artists including Cecily Brown, Nicole Eisenman, Rashid Johnson, Arnulf Rainer, Nancy Spero, Rosemarie Trockel, Germán Venegas and Kara Walker. In addition to drawings and works on paper, the exhibition also includes a large selection of archival materials and ephemera such as rare artist books, prints, editions, and correspondence drawn from CCS Bard’s extensive archives. Revisiting different artistic periods and contexts, the exhibition draws out contrasts and comparisons between artists, modes of representation, and the continuing vitality of drawing and paper as an artistic medium.

Closer to Life is curated by Tom Eccles and Amy Zion.The exhibition is accompanied by a fully illustrated, 380-page catalogue of the Marieluise Hessel collection of works on paper, edited by Tom Eccles and Amy Zion with contributions by Paul Chan, Lynne Cooke, Gabriela Jauregui, and Michael Newman. The catalogue is published by Center for Curatorial Studies, Bard College and designed by Zak Group.

With Pleasure: Pattern and Decoration in American Art 1972–1985

The first full-scale scholarly North American survey of the groundbreaking yet understudied Pattern and Decoration art movement, the exhibition spans the years 1972 to 1985 and features forty-five artists from across the United States working in painting, sculpture, collage, ceramics, textiles, installation art, and performance documentation. Originally on view at MOCA Grand Avenue from October 2019 through May 2020, With Pleasure examines the movement’s defiant embrace of forms traditionally coded as feminine, domestic, ornamental, or craft-based and their significant influence on post-war American art.

Reshaping the Field: Arts of the African Diasporas on Display

Conference to be held November 2021 at CCS Bard

The latest milestone in CCS Bard’s Black Exhibition Histories initiative—which was launched in 2019 to collect understudied archives of influential Black scholars, curators, gallerists, and artists—this scholarly conferenceaimsto expand the field of exhibition histories by exploring a selection of pioneering exhibitions that have shaped contemporary understanding of Black art. Curated by CCS Bard Senior Academic Advisor and Luma Foundation Fellow Nana Adusei-Poku, Reshaping the Field is the first of its kind to focus exclusively on exhibitions of African diasporic art presented in the United States and the U.K., and features panelists including Bridget Cooks, Richard Powell, Cheryl Finley, Jamaal B. Sheats, Lucy Steeds, and Languid Hands (Imani Robinson and Rabz Lansiquot), among many others. Bringing together these and other art historians, curators, and artists who have researched or borne witness to these historic events, CCS Bard’s convening will be an opportunity to gather knowledge that bridges art historical research and oral history while also generating new primary sources.