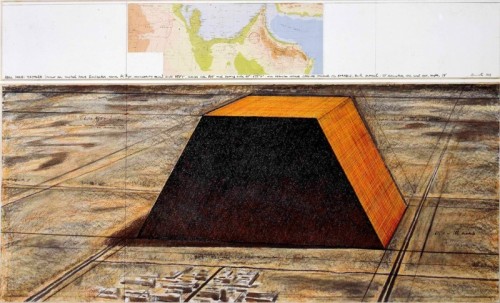 A rare group of Christo works on paper will be on offer as part of Colnaghi’s presentation at Abu Dhabi Art, on view from November 17 until 21, 2021 at Manarat Al Saadiyat. Christo: Works on Paper comprises eleven drawings produced by the artist from the late 70s until the early 2000s, which constitute preparatory drawings for an array of architectural projects, including the not yet realised The Mastaba of Abu Dhabi, Project for United Arab Emirates, 1979, as well as The Umbrellas, Joint Project for Japan and USA, 1990 and Surrounded Islands, Project for Biscayne Bay, Greater Miami, Florida, 1981. These works highlight the key role drawing played in both the genesis and final completion of Christo’s monumental civic projects. This presentation is possible through the collaboration and support of Alessandro Possati of Zuecca Projects and Christopher Taylor, alongside the Estate of Christo and Jeanne-Claude.

Space and architecture became more and more predominant in Christo’s work following his and Jeanne-Claude’s move to New York in 1964, to the point that his approach to the artistic practice changed. 'At the Academy of Fine Arts, I studied architecture and I loved this discipline. I think it shows in my work. At more than 80 years of age, I look at our work with Jeanne-Claude and I see that architecture is very present. It made me think differently than painting or sculpture'. Temporary projects set in urban or natural contexts required long preparation and a highly technical approach, less visceral than early, smaller wrappings or pictorial experimentations. In his drawings, Christo mastered the rules for making academic art, then subverted them, creating inventive collages in which traditional materials—pencil, charcoal, pastel—naturally blend with unorthodox ones—industrial paint, plastic, fabric, string, masking tape—as they were a concerto of perfectly intonated voices.

From the 'skeletal and problematic' initial sketches to the hyperdetailed and ultra-descriptive final drawings, these 'preparatory works' as Christo would define them, are part of what he termed a 'growing process'. Complex and long, this process consisted of negotiations with administrators and government officials to obtain permissions, discussions with residents and local associations to calm fears and counter objections and consultations with engineers and craftsmen on the project’s technical development and implementation. It allowed him to adjust and refine his ideas, which would influence his drawing and, in turn, have a powerful impact on the project’s conception. Christo’s final preparatory works so accurately predict the realised project, that they appear to mirror its definitive state. As a path to reality, tthese drawings became the history and the archive of each project. It is with a drawing that the journey begins.

These important works will be shown alongside a fantastical triptych by Raqib Shaw, The Piranesi Triptych, 2008. Shaw combines iconography from both East and West in his work, drawing on a wide range of sources including art history, mythology, poetry, theatre, religion, science and natural history. The title of the present triptych refers to the eighteenth-century Italian print-maker Giovanni Battista Piranesi (1720-1778), famous for his vedute of Rome and depictions of the city’s classical ruins. Piranesi’s reminiscence of a golden age in decline is taken on and subverted by Shaw. Instead of a melancholic rumination on past opulence, Shaw’s work hedonistically revels in the breakdown; a once ostentatious kingdom, now in ruins, is overrun with immoral pandemonium. The fall of the Roman Empire is re-imagined and satirised as an otherworldly tableau of exotic depravity. The transgressive vision is executed with pools of enamel and metallic industrial paints, which are meticulously applied and manipulated to the desired effect with a porcupine quill. Every motif is outlined in embossed gold, a technique similar to ‘cloisonné’ found in early Asian pottery, which is one of many sources of inspiration to Shaw.

Says Victoria Golembiovskaya, CEO of Colnaghi, 'We are delighted to participate in this 13th edition of Abu Dhabi Art, bringing Christo’s remarkable preparatory drawings to this important artistic centre, including his yet to be realised Mastaba (Project for Abu Dhabi, United Arab Emirates). This follows the success and interest in our presentation of Christo’s early works at Frieze Masters in London this October. We are delighted to showcase an otherworldly vision by the contemporary artist Raqib Shaw alongside these, in a display which utterly unites the worlds of the real and the imagined. We hope to see you there!'

ABOUT CHRISTO AND JEANNE-CLAUDE

Born in Bulgaria in 1935 as Christo Javacheff, Christo studied at the Fine Arts Academy in Sofia from 1953 to 1956 before making the life-changing decision to defect to the West, via Prague, in 1957. After his relocation, he spent one semester studying at the Akademie der Bildenden Künste in Vienna before moving to Paris in 1958, where he would meet and marry Jeanne-Claude, his partner in life and art. In the beginning they worked together under Christo's name; Jeanne-Claude would not publicly acknowledge her role in their creations until 1994. From early wrapped objects to monumental outdoor projects, Christo and Jeanne-Claude's artwork transcended the traditional bounds of painting, sculpture and architecture. Some of their work included Wrapped Coast near Sydney, 1968–69; Valley Curtain in Colorado, 1970–72; Running Fence in California, 1972–76; Surrounded Islands in Miami, 1980–83; The Pont Neuf Wrapped in Paris, 1975–85; The Umbrellas in Japan and California, 1984–91; Wrapped Reichstag in Berlin, 1972–95; The Gates in New York's Central Park, 1979–2005; The Floating Piers at Italy's Lake Iseo, 2014–16; and The London Mastaba on London's Serpentine Lake, 2016–18. Major exhibitions of the artists' work have been organised by the Institute of Contemporary Art in Boston (1979), Museum Ludwig in Cologne (1981), Hiroshima City Museum of Contemporary Art (1990), Martin-Gropius-Bau in Berlin (2001), and the Metropolitan Museum of Art in New York (2004). Jeanne-Claude died in 2009; Christo in 2020.

Born in 1974 in Calcutta, India, Raqib Shaw is known for opulent and intricately detailed paintings of fantastical worlds, often with surfaces inlaid with vibrantly colored jewels and painted in enamel. His works reveal an eclectic fusion of influences—from Persian carpets and Northern Renaissance painting to industrial materials and Japanese lacquerware—and are often developed in series from literary, art historical and mystical sources. Shaw has had solo exhibitions at Tate Modern, London (2006); The Metropolitan Museum of Art, New York (2008); Manchester Art Gallery (2013); Galerie Rudolfinum, Prague (2013); and the Scottish National Gallery of Modern Art, Edinburgh (2018). His exhibition at The Whitworth Art Gallery, The University of Manchester, United Kingdom (2017) was reimagined for the Dhaka Art Summit, Bangladesh, in 2018. Raqib Shaw lives and works in London.