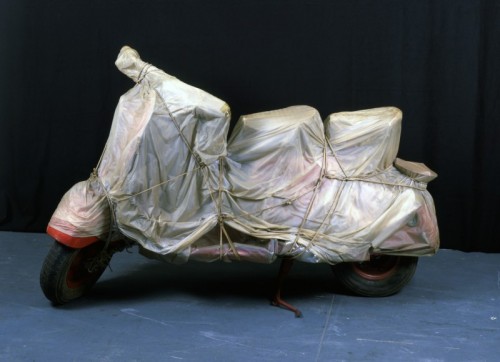 WHAT: A rare group of early works by Christo will be on offer as part of Colnaghi's cross-period presentation for Frieze Masters this October.

Christo: Early Works comprises nine sculptural works as well as select works on paper produced in the first years of what would become a prolific and legendary career. Highlights include Two Wrapped Chairs (1961), whose form and function are obscured by thick cloth secured by rope, and Wrapped Magazines (Kim Novak), (1962), Wrapped Road Sign (1963) and Wrapped Vespa (1963-1964), which reflect an early practice of using sheets of polyethylene to encase found objects.

These works will be presented alongside two portrait busts from antiquity, notably the Roman Portrait Head of a Veiled Woman (2nd Century AD), an iconic Old Master painting The Viel of Saint Veronica by Francisco de Zurbarán and Workshop, and modern and contemporary offerings, including sculpture by Claes Oldenburg and Roy Lichtenstein, and painting by Piero Dorazio, Hans Hartung, Heinz Mack, Walter Leblanc, and Antoni Tàpies, reflecting Colnaghi's mission of supporting cross-category collecting.

Christo: Early Works is made possible through the collaboration and support of Alessandro Possati of Zuecca Projects and Christopher Taylor, alongside the Estate of Christo and Jeanne-Claude.

WHERE: Booth B8 at Frieze Masters, Regents Park, London

ABOUT CHRISTO: Born as Christo Javacheff, Christo (1935-2020) first became intrigued by the idea of wrapping found objects in the late 1950s after defecting to Paris from his native Bulgaria in 1957. From these small-scale, early wrapped objects to monumental outdoor projects, Christo together with Jeanne-Claude, his partner in life and art, transcended the traditional bounds of painting, sculpture, and architecture in their creative practice. The artists have been the subject of major exhibitions around the world, including at the Centre Pompidou (2020), the Metropolitan Museum of Art (2004) and Martin-Groupius-Bau (2001).