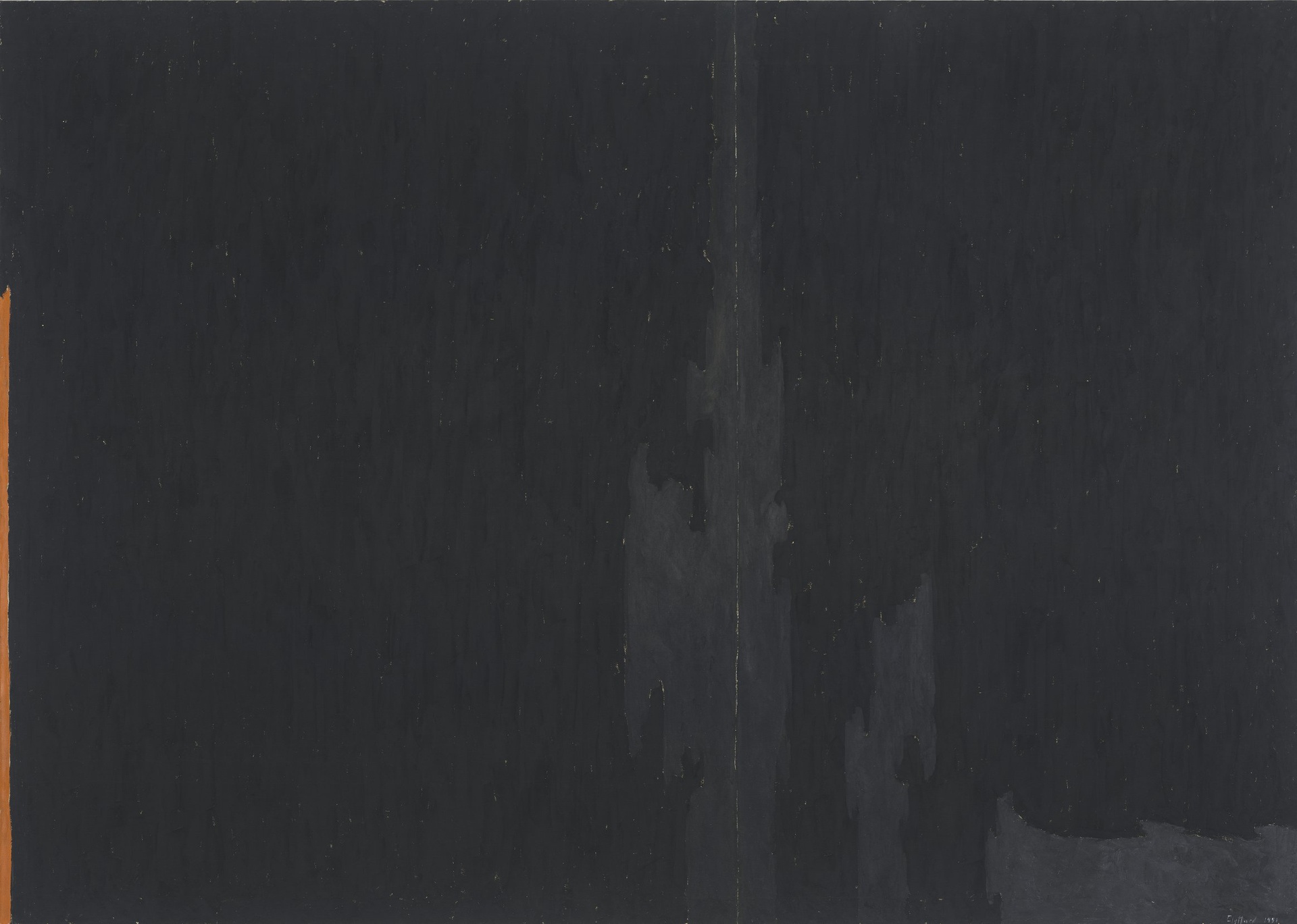 Denver—May 26, 2016—Next spring, the Denver Art Museum and Clyfford Still Museum will unite the work of two artists separated by generations in a creative collaboration. Shade: Clyfford Still / Mark Bradford includes an exhibition at the Denver Art Museum (DAM) of new paintings by renowned contemporary American artist Mark Bradford, who deeply admires Clyfford Still’s art, as well as a unique presentation of Still’s work curated by Bradford at the Clyfford Still Museum (CSM). Bradford was honored in 2014 with the U.S. Department of State’s Medal of Arts and notably was recently named as the U.S. representative at the 2017 Venice Biennale. A traveling exhibition organized by Buffalo's Albright-Knox Art Gallery, Shade opened in Buffalo on May 25, 2016, and will be on view to Denver audiences at DAM and CSM April 9–July 16, 2017. The presentation at CSM continues the museum’s Artists Select program, which invites contemporary artists to curate works from the museum’s holdings to explore Still’s legacy and the inspiration each draws from Still’s work.

“This exhibition takes our partnership with the Clyfford Still Museum to new heights,” said Christoph Heinrich, Frederick and Jan Mayer Director of the DAM. “By visiting the exhibition at DAM and CSM, visitors will gain a deeper understanding of the connection between Bradford’s work and Still’s abstractions as they relate to the legacy of abstract expressionism.”

CSM Director Dean Sobel added, “We are particularly excited to present this exhibition, which reveals the continued importance and meaning of Still’s work among artists of our time. It is our mission to bring greater visibility to Still’s work both locally and internationally, and this partnership with DAM will help to illuminate Still’s vision for Denver audiences through the eyes of a prominent contemporary artist.”

DAM’s exhibition will be an expanded presentation of the Albright-Knox’s, and will feature paintings that Bradford recently created, presented alongside related canvases by Clyfford Still. To create a body of work specifically for the Albright-Knox presentation, Bradford built on his interest in crafting paintings that explore the underpinnings of expressionistic abstraction in the 21st century. He drew inspiration from the large-scale and tactile surfaces of Still’s work, including Still’s use of black, brown and other somber colors that Bradford employed for both their symbolic and expressive qualities. Rebecca Hart, Polly and Mark Addison Curator of Modern and Contemporary Art, will curate DAM’s presentation of the exhibition in the Museum’s Gallagher Family Gallery.

“The title Shade has rich implications such as to shelter from light, to be in a shadow or to add black to a hue to darken it,” said Hart. “Both Clyfford Still and Mark Bradford have a unique relationship to black. At a time when other Abstract Expressionist painters had vibrant palettes, Still used black to force viewers out of their comfort zones. For Bradford, the choice of black isn’t neutral; it intentionally forces us to confront conventional notions of race. Each viewer will interpret the use of black differently, hopefully evoking emotions that connect them to the works on view.”

Bradford’s curation of Still’s work at CSM will feature approximately fifteen works that prominently incorporate black pigments, spanning five decades. The selection reveals Bradford’s appreciation for Still’s frequent use of black and for Still’s many evocative statements about the color, including, “Black was never a color of death and terror for me. I think of it as warm and generative.” Bradford’s curation will be featured in the Museum’s two largest galleries. This exhibition marks the Museum’s third installment of its Artists Select series, which began in 2015 with an exhibition curated by visual artist and composer Mark Mothersbaugh, and continues in early 2017 with an exhibition curated by contemporary artist and filmmaker Julian Schnabel.

Bradford believes his new work for this exhibition is in dialogue with Still’s. He recalled seeing a Still painting for the first time: “What caught my eye was the insistence of his paintings. His surfaces were more raw and immediate than other abstract expressionist paintings. His paintings are not just optical—they have a very physical presence.” In comparing his studio process with Still’s, Bradford said, “My paintings are made up of tearing. To me it represents a process that is more of a reality than laying down a perfect line of paint. It’s raw and violent but it still comes together. And it’s not just a tearing that you see in Still’s paintings, it’s a collision of colors. There aren’t smooth transitions.”

Visitors to both DAM and CSM’s presentations of Shade will see Bradford’s take on abstractions of class, culture, race and gender. Social activism and art will be explored further through programming at both museums, inspired by Bradford’s Art + Practice Foundation, which he founded with philanthropist and collector Eileen Harris Norton and social activist Allan DiCastro. Art + Practice aims to empower foster youth and strengthen communities through contemporary art. The Foundation also encourages life-skills training through educational and cultural experiences.

Shade is accompanied by a fully illustrated catalogue including an essay by Cathleen Chaffee, senior curator at the Albright-Knox Art Gallery, and a dialogue between Mark Bradford and Michael Auping, chief curator of the Modern Art Museum of Fort Worth.

The exhibition is organized by the Albright-Knox Art Gallery. The presentation in Denver is in collaboration with the Albright-Knox Art Gallery, CSM and the DAM. Shade is generously funded by Vicki and Kent Logan, the donors to the Annual Fund Leadership Campaign and the citizens who support the Scientific and Cultural Facilities District (SCFD). Promotional support is provided by 5280 Magazine, CBS4, Comcast Spotlight and The Denver Post.

Mark Bradford was born in Los Angeles, where he continues to live and work. He received both his BFA (1995) and his MFA (1997) from the California Institute for the Arts (CalArts). He is the recipient of numerous awards including a 2009 MacArthur Fellowship Award, the Bucksbaum Award for his contribution to the Whitney Biennial in 2006, a 2006 USA Fellowship Award, and a 2003 Louis Comfort Tiffany Foundation Award. In 2017, the Rose Art Museum at Brandeis University, in cooperation with the U.S. Department of State’s Bureau of Educational and Cultural Affairs, will present Mark Bradford as the representative for the United States at La Biennale di Venezia 57th International Art Exhibition. His works are in the collection of many major institutions including the Cincinnati Art Museum; Los Angeles County Museum of Art; Hammer Museum, Los Angeles; Hirshhorn Museum and Sculpture Garden/The Smithsonian Institution, Washington, DC; Museum of Contemporary Art, Chicago; Museum of Fine Arts, Boston, Museum of Modern Art, New York; Tate, London; Walker Art Center, Minneapolis; and Whitney Museum of American Art, New York.

ABOUT THE ALBRIGHT-KNOX ART GALLERY

The Albright-Knox Art Gallery is recognized as home to one of the world’s leading collections of contemporary and modern art. With more than 8,000 objects in its collection and a dynamic series of exhibitions and public programs, the Albright-Knox continues to grow and to fulfill its mission to acquire, exhibit, and preserve contemporary and modern art in an enriching, dynamic, and vibrant environment.

ABOUT THE CLYFFORD STILL MUSEUM

Home to the world’s most intact public collection of a major American artist, the Clyfford Still Museum opened in November of 2011 to promote public and scholarly understanding of the life and work of Clyfford Still (1904–80). Considered one of the most important painters of the 20th century, Still was among the first generation of Abstract Expressionist artists who developed a new, powerful approach to painting in the years following World War II. The museum was designed by Allied Works Architecture, which received the 2013 Design Award, 2012 Honor Award, and 2012 Craftsmanship Award from regional chapters of the American Institute of Architects for the project. For more information, call 720-354-4880 or visit clyffordstillmuseum.org.

ABOUT THE DENVER ART MUSEUM

The Denver Art Museum is an educational, non-profit resource that sparks creative thinking and expression through transformative experiences with art. Its holdings reflect the city and region—and provide invaluable ways for the community to learn about cultures from around the world. Denver metro citizens support the Scientific and Cultural Facilities District (SCFD), a unique funding source serving hundreds of metro Denver arts, culture and scientific organizations. Since its founding in 1893, the Denver Art Museum has amassed more than 68,000 works of art, one of the largest and most comprehensive collections of world art between Chicago and the West Coast. For more information, call 720-865-5000 or visit www.denverartmuseum.org.