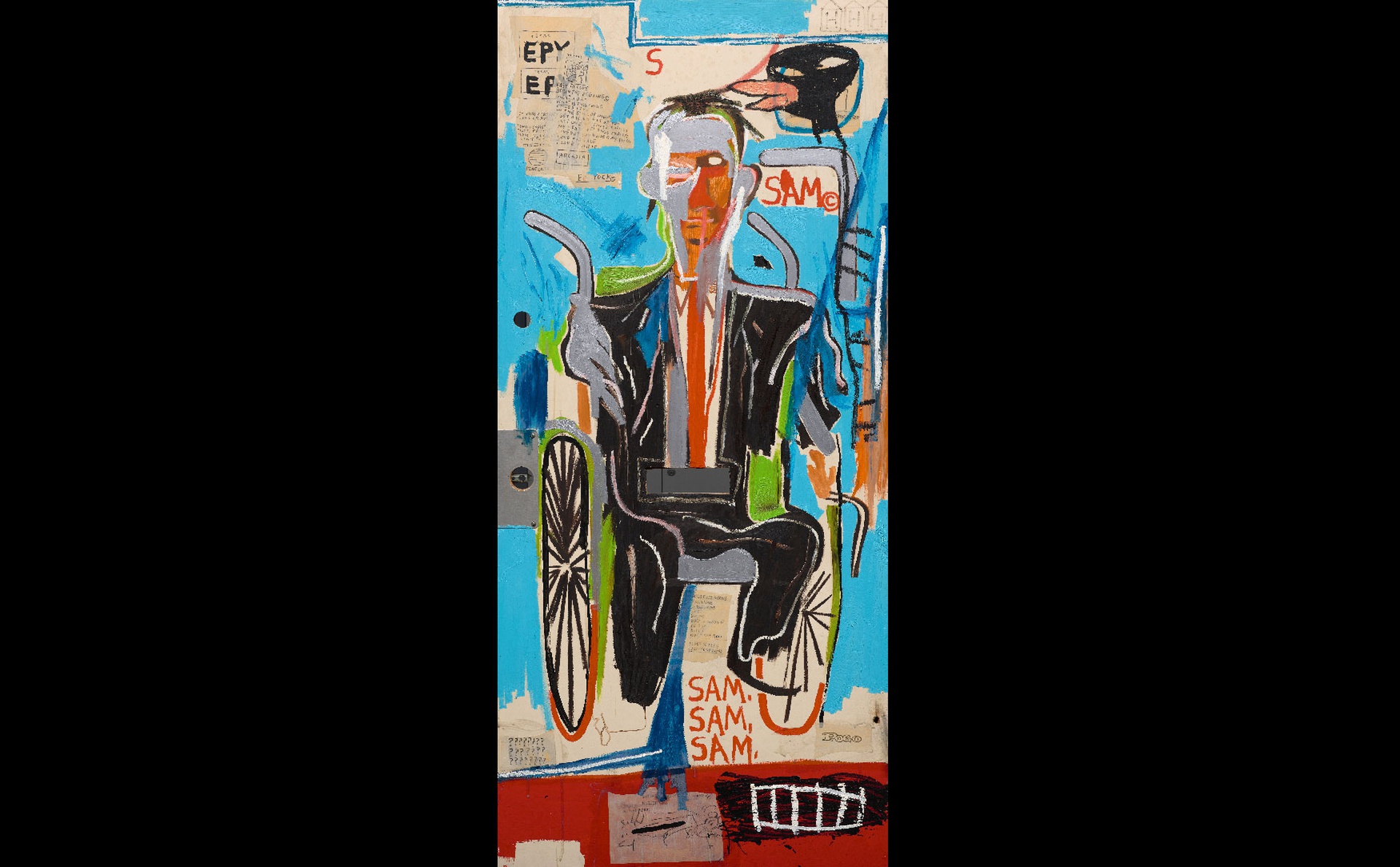 The Dallas Museum of Art (DMA) is pleased to announce the acquisition of Sam F (1985) by Jean-Michel Basquiat, the first work by the iconic American artist to enter the Museum’s collection. Gifted to the DMA by the late Samuel and Helga Feldman, the painting was created during the artist’s visit to Dallas in 1985. The expressionistic portrait of Samuel exhibits Basquiat’s characteristic use of dense, meaning-laden text and imagery drawn from multiple sources, including pop culture figures, music and literature, and art historical iconography, among others. Basquiat often painted on salvaged materials, and Sam F is painted in oil on a door from the Dallas apartment building in which he was staying. Sam F will be exhibited at the DMA on the main concourse beginning July 4, 2021, until February 2022.

The 24-year-old Basquiat visited Dallas in 1985 at the invitation of contemporary art consultant Marcia May and her husband Alan to attend the DMA’s opening reception for the exhibition Primitivism in 20th Century Art: Affinity of the Tribal and the Modern, organized by the Museum of Modern Art. The artist stayed at the May residence for several weeks and regularly visited with the Feldmans, who lived in the same apartment complex. In 1993, almost five years after Basquiat’s death, the DMA presented Dallas Collects Jean-Michel Basquiat. The focused exhibition featured 17 of Basquiat’s works in private collections in Dallas, including Sam F.

“We are honored to have this supremely important artist represented in our collection by a work that has such a special connection to our city and our museum,” said Dr. Agustín Arteaga, the DMA’s Eugene McDermott Director. “As a work of art, the painting is an excellent example of Basquiat’s iconic style. As a treasured object, its history is a testament to the deep generosity and support of Dallas patrons for contemporary artists and the city’s arts institutions. As it is a beautiful new acquisition, we are thrilled to share it with our community almost as quickly as we received it.”

Jean-Michel Basquiat (b. Brooklyn, NY, 1960; d. New York, NY, 1988), one of the most important and celebrated American painters of the 1980s, was known for his frenetic portraits and graffiti-tagged scenes that seamlessly incorporated references to Black popular culture, canonic art history and literature, and sociocultural critique. Of Haitian and Puerto Rican descent, Basquiat gained notoriety in the late 1970s for the cryptic aphorisms and phrases he left on the walls of Manhattan with his collaborator Al Diaz under the tagged pseudonym SAMO. In 1981, he turned to more traditional modes of painting, working on salvaged materials, canvas, and paper to merge the graphic lexicon of graffiti with art historical conventions of portraiture and still life.

“Sam F is a landmark gift for the DMA,” adds Dr. Anna Katherine Brodbeck, Hoffman Family Senior Curator of Contemporary Art. “The first work of art to enter the collection by the world-renowned artist, it embodies Basquiat’s uncanny ability to meld art history, pop culture, and empathy for the human subject. This painting fills a significant gap in our collection and allows us the opportunity to share with audiences the groundbreaking contributions of Black and Latinx artists to the art world in the 1980s.”