Dallas, TX and San Francisco, CA—June 23, 2016—The Dallas Museum of Art and the San Francisco Museum of Modern Art announced today that they have jointly acquired a major sculpture by Walter De Maria. 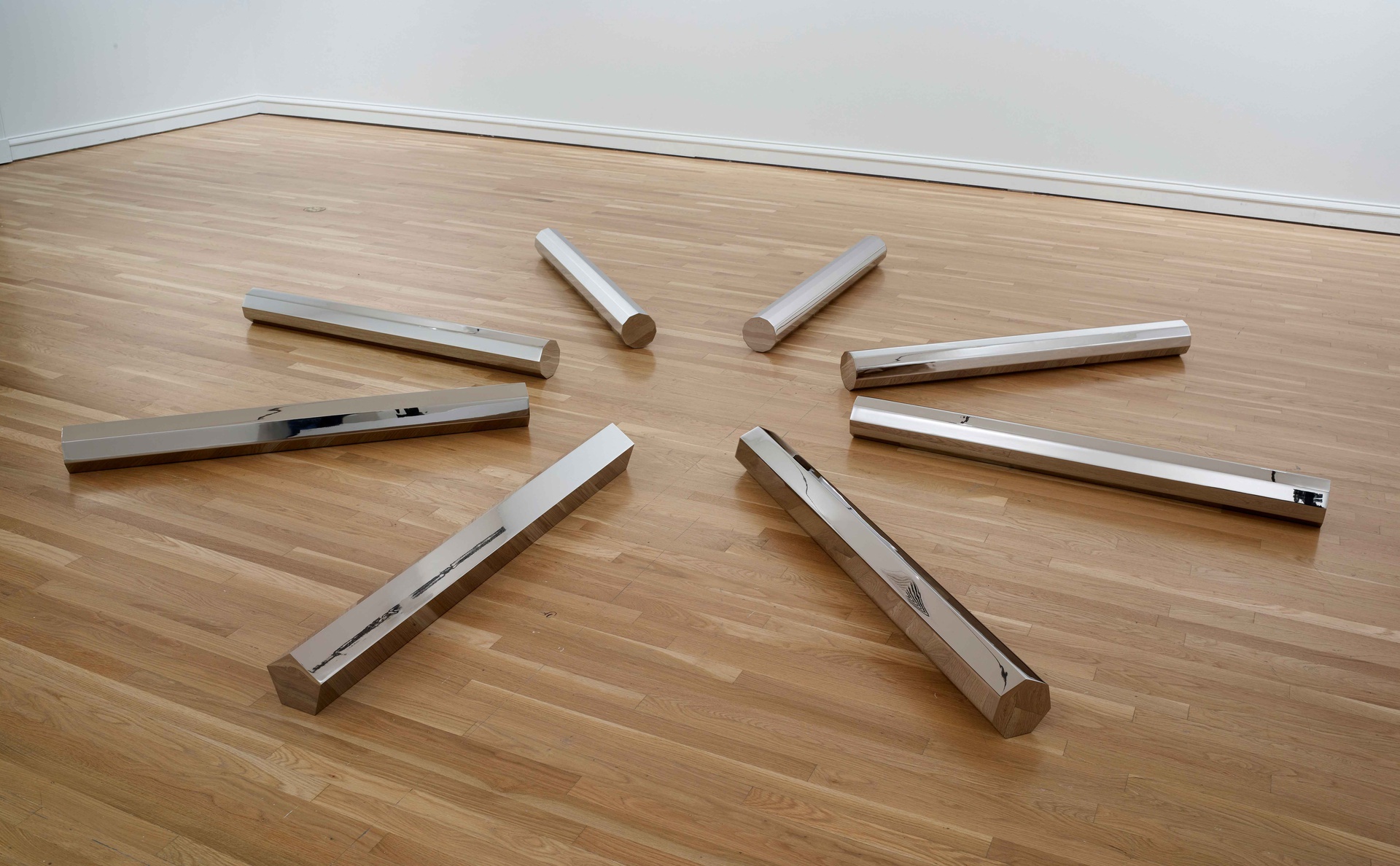 Dallas, TX and San Francisco, CA—June 23, 2016—The Dallas Museum of Art and the San Francisco Museum of Modern Art announced today that they have jointly acquired a major sculpture by Walter De Maria.

The work will receive its first museum presentation in three decades at the DMA this fall, followed by an SFMOMA installation in the spring of 2017. Large Rod Series: Circle/Rectangle, 5, 7, 9, 11, 13 (1986) is an important installment in De Maria’s Large Rod Series, a group of floor-based sculptures that were among the artist’s most notable contributions to the minimalist movement. The museums have also jointly acquired Pure Polygon Series, a suite of seven works on paper created by De Maria in 1975–76. The acquisition of these two works marks the first acquisition collaboration between the two museums.

Large Rod Series and Pure Polygon Series are the first works by Walter De Maria to enter the DMA’s collection, advancing the Museum’s growing strengths in modern and contemporary art. At SFMOMA, they are likewise the first unique works by De Maria to enter the collection, where they build upon the museum’s considerable holdings of minimal and conceptual art. The acquisition was initiated by Gavin Delahunty, the DMA’s Hoffman Family Senior Curator of Contemporary Art, and Gary Garrels, SFMOMA’s Elise S. Haas Senior Curator of Painting and Sculpture. A new publication will accompany the acquisition, with recent scholarship contributed by Gavin Delahunty; Caitlin Haskell, Assistant Curator of Painting and Sculpture at SFMOMA; and percussionist Jason Treuting. It will be the first publication devoted solely to this influential American artist since his death in 2013.

A towering figure in the history of American Minimalism, Walter De Maria was profoundly influenced by mathematical concepts throughout his five-decade artistic practice. This aesthetic is typified by his iconic Long Rod sculptures, which consist of multiple steel polygonal bars arranged in precise geometric formations. Large Rod Series: Circle/Rectangle, 5, 7, 9, 11, 13 can be installed in three distinct configurations, each of which illustrates a series of mathematical patterns. The sculpture has not been exhibited in a museum setting for 30 years, when it was included in a solo exhibition at Harvard’s Fogg Art Museum in 1986.

De Maria’s interest in geometry is similarly captured in Pure Polygon Series, a portfolio of abstract geometric drawings produced with a metal stencil. Exemplifying De Maria’s long-held precept that “the invisible” should be considered an essential component of artistic production, each drawing is nearly invisible to the naked eye; only from a few inches’ distance can viewers identify the faint pencil lines that form the complex polygonal structures on each page. Pure Polygon Series will be displayed alongside Large Rod Series: Circle/Rectangle, 5, 7, 9, 11, 13 at the DMA, illustrating for viewers the common themes of De Maria’s creative practice.

“Walter De Maria is undoubtedly one of the giants of 20th-century art. Emerging out of an interdisciplinary network of artists, poets and composers in the early 1960s, he became the exemplar of the minimalist aesthetic and pioneer of Land Art,” said Delahunty. “This spectacular pair of works exemplifies De Maria’s indelible style, capturing a mathematical precision that transcends form and achieves a subtly poetic effect. We are delighted to partner with SFMOMA on integrating De Maria into our holdings for the first time, accelerating the growth of a modern and contemporary collection that already includes many of his contemporaries.”

“Walter is an artist I have long felt belongs in SFMOMA’s collection,” said Garrels. “And I could not be more pleased to correct this omission and give him the important place he deserves here by partnering with the DMA. As some may know, our museum shares a history with De Maria already. Growing up in the Bay Area, he was introduced to modern art in our galleries. Now, decades later, it will be an honor to present two superb examples of his work at SFMOMA, where his art is a natural fit alongside so many of his generational peers in our collections of postwar painting and sculpture. ”

Walter De Maria (1935–2013) was an American artist associated with minimal, conceptual, installation, and Land art. Born in Albany, California, De Maria studied history and art at the University of California, Berkeley. In 1960 he moved to New York City, where he continued to live and work. He is best known for The Lightning Field (1977), a long-term installation in western New Mexico made up of 400 pointed stainless steel poles arranged in a grid over an area measuring one mile by one kilometer. His work was included in the infamous "Primary Structures" exhibition at the Jewish Museum, New York, in 1966. De Maria has had numerous international shows at venues including Dia Beacon (2010); the Kunsthaus Zürich (1999); the Museum für Moderne Kunst, Frankfurt (1991); Moderna Museet, Stockholm (1989); the Staatsgalerie Stuttgart (1987); the Museum Boymans-van Beuningen, Rotterdam (1984); Centre Georges Pompidou, Paris (1981); and Kunstmuseum Basel (1972).

Established in 1903, the Dallas Museum of Art (DMA) is among the 10 largest art museums in the country and is distinguished by its commitment to research, innovation and public engagement. At the heart of the Museum and its programs is its global collection, which encompasses more than 23,000 works and spans 5,000 years of history, representing a full range of world cultures. Located in the nation’s largest arts district, the Museum acts as a catalyst for community creativity, engaging people of all ages and backgrounds with a diverse spectrum of programming, from exhibitions and lectures to concerts, literary events, and dramatic and dance presentations. Since the Museum’s return to free general admission in 2013, the DMA has welcomed more than two million visitors, and enrolled more than 100,000 people in DMA Friends, a free program focused on active engagement with the Museum that is available to anyone who wishes to join. For more information, visit DMA.org.

About the San Francisco Museum of Modern Art

Founded in 1935 as the first West Coast museum devoted to modern and contemporary art, a thoroughly transformed SFMOMA, with significantly enhanced gallery, education and public spaces, opened to the public on May 14, 2016. With six art-filled terraces, a new sculptural staircase and Roman steps where the public can gather, access to 45,000 square feet of free art-filled public space and free admission for visitors age 18 and younger, SFMOMA is more welcoming and more connected to San Francisco than ever before.