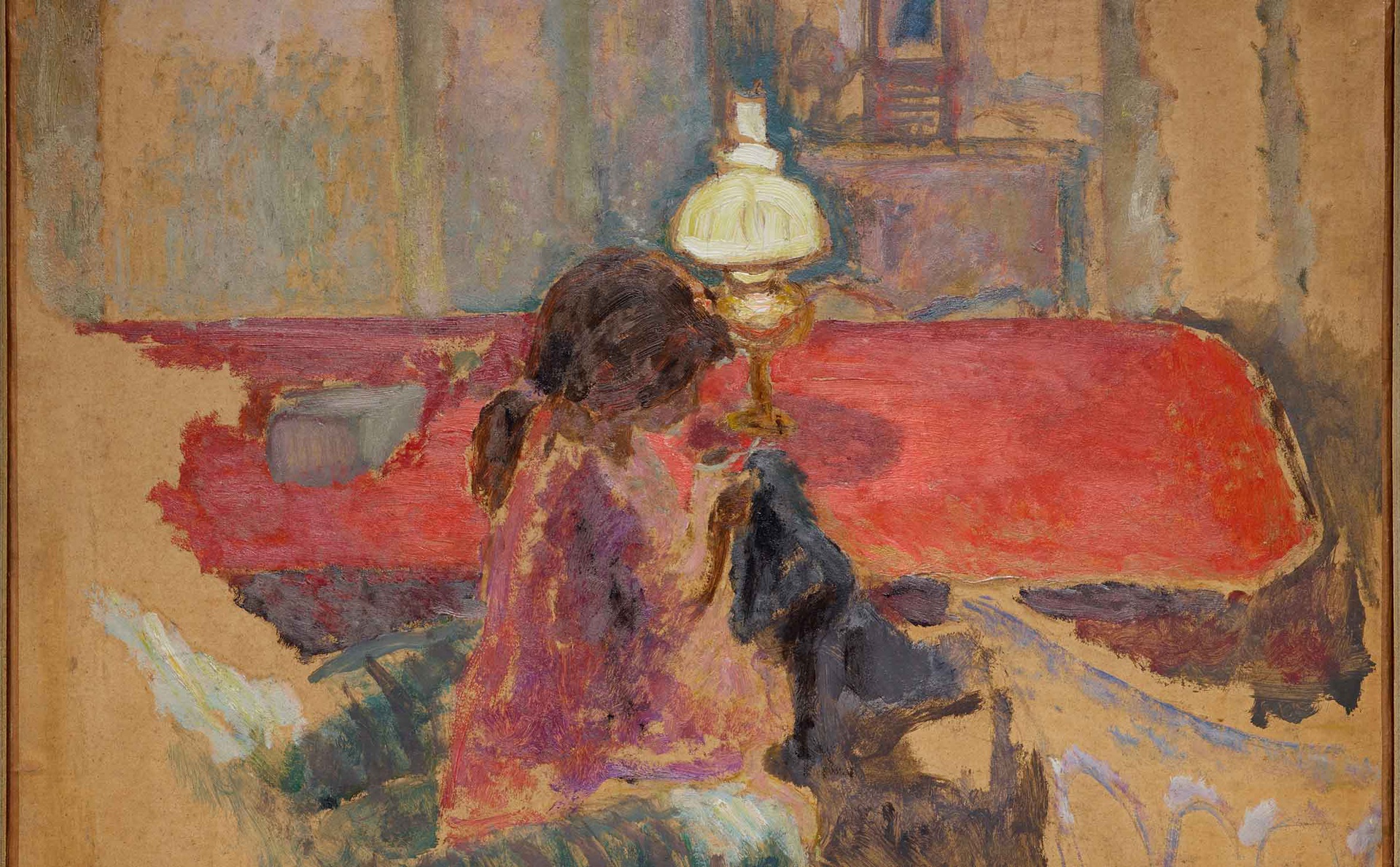 The Dallas Museum of Art is excited to announce the gift of three major works of European art that reflect the extraordinary generosity of Dallas collectors and their dedication to expanding the Museum’s collection in meaningful ways. “These astonishing acquisitions of a seductive painting by the ‘French Titian’ Jacques Blanchard, a monumental double-sided drawing by Piet Mondrian, and an early 20th-century painting by Pierre Bonnard will invigorate the Museum’s renowned European collection,” said the Eugene McDermott Director of the DMA, Agustín Arteaga.

Zeus and Semele is a recently rediscovered masterwork by the important 17th-century Baroque painter Jacques Blanchard. Although not as well known today–a fate related to the artist’s early death at 37 and resulting scarcity of his work—Blanchard was celebrated in his day for his richly hued and sensual subjects inspired by 16th-century Venetian painting. Through the generosity of collectors Thomas C. and Jeanne Campbell, who gifted this exceedingly rare and remarkable painting to the Museum’s Foundation for the Arts Collection, the DMA continues to expand its Old Master collection with exceptional works of art.

Ann Jacobus Folz’s extraordinary gift of two amazing examples of European Modernism reinforces the Museum’s impressive holdings of early 20th-century art. The first is an impressive scaled, double-sided charcoal drawing by the modern master Piet Mondrian, the eleventh example by Mondrian to enter the collection. The DMA has the second largest holdings of his work in the U.S. thanks to the continued generous giving of Dallas collectors. The front side boasts an evocative, almost painterly drawing that relates closely to the painting Farm Near Duivendrecht, in the Evening (c. 1916) in the Museum’s collection. On the back, an abstract composition titled The Sea (Ocean 2) reveals the beginning of Mondrian’s move away from representational imagery toward the grid structure that would become a hallmark of later works such as the DMA’s Composition with Large Blue Plane, Red, Black, Yellow, and Gray (1921) and Place de la Concorde (1938–54). “This crucial intermediary phase of Mondrian’s stylistic development was, until now, missing from the collection,” noted Nicole Myers, the DMA’s Lillian and James H. Clark Curator of European Painting and Sculpture. “With this gift, our visitors will be able to experience the dramatic transformation of Mondrian’s approach—from Post-Impressionism to Abstraction—as it unfolds across the walls of our galleries.”

With Folz’s incredible gift, the Museum also acquired a significant painting by Pierre Bonnard, its seventeenth work by this influential Modern artist. In spite of the Museum’s deep holdings, Woman with a Lamp (1909) is the first acquisition that captures Bonnard’s transition from the decorative Nabi aesthetic of the 1890s to his more abstract, brightly hued paintings from the 1920s on. A combination of both his early and late styles, this luminous painting infused with a sense of quiet mystery connects the Museum’s collection, bridging the gap from Interior: The Terrasse Children (1899) to Nude, Yellow Background (c. 1924) and beyond.

“We are extremely grateful for the recent gifts to our European collection by Thomas C. and Jeanne Campbell through the Foundation for the Arts Collection and by Ann Jacobus Folz,” added Arteaga. “The three new works contribute to further establishing the strength and breadth of the DMA’s European collection, highlighting artistic achievements and milestones throughout centuries of creativity. The DMA is honored to have such supportive donors whose inspirational gifts of art continue to grow and enhance our global collection.”

Additional information on each acquisition follows:

Zeus and Semele (1632), Jacques Blanchard (1600–1638) Zeus and Semele, of 1632, was reattributed to Blanchard in 2014 by leading experts based primarily on its close relationship to Blanchard’s Danae in the Musée des Beaux-Arts in Lyon. After its reattribution, the painting, whose subject is taken from the Greek mythological story of Semele, a princess of Thebes, and the love affair she had with Zeus, underwent conservation treatment at the DMA in 2015. Jacques Blanchard was a French Baroque painter whose five years spent working and studying in Italy greatly influenced his artistic approach. Inspired by 16th-century Venetian painters, including Titian, Blanchard was celebrated for his skills as a colorist and enjoyed important commissions in his hometown of Paris throughout his career. This Venetian-inspired style is seen in the DMA’s new acquisition, particularly in the richly hued palette and the sensuous treatment of the nude.

Farm Near Duivendrecht (recto) and The Sea (Ocean 2) (verso) (c. 1905–1914), Piet Mondrian (1872–1944) This large double-sided drawing, Farm Near Duivendrecht (recto) and The Sea (Ocean 2) (verso), by Piet Mondrian is the eleventh work of art by this incredibly influential artist of European modernism to enter the DMA’s collection. The motif of the farm near Duivendrecht was one of his favorites at the beginning of his career and was so popular with collectors that he continued to make new versions of the subject well into the 1910s. The recto of this charcoal drawing is one of those late iterations and is compositionally similar to the DMA’s painting Farm Near Duivendrecht, in the Evening (c. 1916). Together they present a unique opportunity to make side-by-side comparisons to gain insight into Mondrian’s artistic process. Completed two years prior, the drawing on the verso, The Sea (Ocean 2), was produced during a period when Mondrian was breaking away from representational painting, and it anticipates the evolution of his style toward compositions dominated by geometric shapes and interlocking planes. It represents an important transitional phase in his development that was previously missing from the DMA’s collection.

Woman with a Lamp (1909), Pierre Bonnard (1867–1947) Woman with a Lamp by Pierre Bonnard is the first work to enter the DMA’s collection from the artist’s fascinating period when he began departing from the Nabis style. Bonnard was a founding member of the Nabis, a group of Post-Impressionist French artists active from 1888 to 1900 whose works are characterized by greatly simplified flattened forms and broad patches of solid color. He was particularly drawn to capturing intimate scenes of everyday life. Woman with a Lamp was completed shortly after the group disbanded, at a moment when Bonnard was developing a new painting style and a different compositional structure for his interior scenes. It introduces a motif that would become one of the most dominant in his interiors of the 20th century: a long dining room table covered in a vibrant red tablecloth.

Established in 1903, the Dallas Museum of Art (DMA) is among the 10 largest art museums in the country and is distinguished by its commitment to research, innovation, and public engagement. At the heart of the Museum and its programs is its global collection, which encompasses more than 24,000 works and spans 5,000 years of history, representing a full range of world cultures. Located in the nation’s largest arts district, the Museum acts as a catalyst for community creativity, engaging people of all ages and backgrounds with a diverse spectrum of programming, from exhibitions and lectures to concerts, literary events, and dramatic and dance presentations. Since the Museum’s return to free general admission in 2013, the DMA has welcomed more than 3.2 million visitors. For more information, visit DMA.org.

The Dallas Museum of Art is supported, in part, by the generosity of Museum Members and donors, the citizens of Dallas through the City of Dallas Office of Cultural Affairs, and the Texas Commission on the Arts.