Denver Art Museum to Spring into Fashion in March 2021 with Paris to Hollywood: The Fashion and Influence of Véronique and Gregory Peck

Exhibition to include 20 of Véronique’s iconic looks recently donated to the museum, as well as fashion sketches, photographs, archival fashion, family film clips, letters and documentation showcasing 15 couturiers and designers from around the world 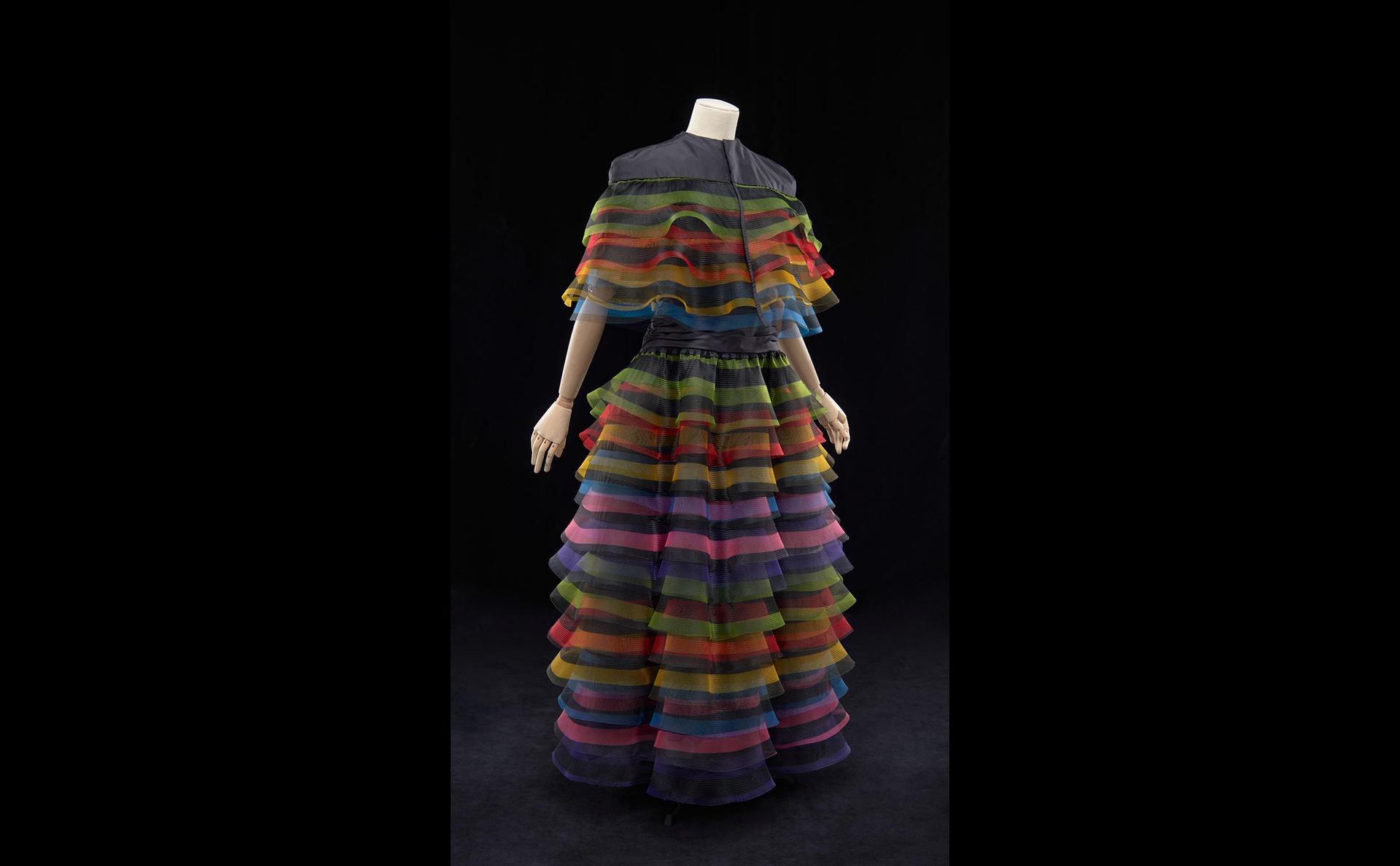 Image
Denver Art Museum to Spring into Fashion in March 2021 with Paris to Hollywood: The Fashion and Influence of Véronique and Gregory Peck

Exhibition to include 20 of Véronique’s iconic looks recently donated to the museum, as well as fashion sketches, photographs, archival fashion, family film clips, letters and documentation showcasing 15 couturiers and designers from around the world

The Denver Art Museum (DAM) today announced Paris to Hollywood: The Fashion and Influence of Véronique and Gregory Peck, an exhibition that will present 100 ensembles—by 15 different couturiers and designers from around the world—from the wardrobe of Parisian writer, philanthropist and fashion influencer Véronique Peck. A selection of haute couture, fashion sketches, photographs, film clips, family snapshots and documents, such as letters and receipts, will be exhibited publicly for the first time, providing a unique look into the style of one of Hollywood’s most beloved couples. The presentation will cover more than four decades, from the 1950s to the 1990s, providing an overview of how fashion changed as the roles of women in society evolved in the 20th century. In conjunction with the exhibition, Véronique and Gregory’s daughter, Cecilia Peck Voll, has gifted the Denver Art Museum 20 of her mother’s iconic looks for the museum’s collection. Paris to Hollywood, organized by the Denver Art Museum and curated by Florence Müller, the DAM’s Avenir Foundation Curator of Textile Art and Fashion, and designed by architect Brian Dale and designer Meredith Dale, both co-founders of Sort Studio, will be on view from March 14, 2021, through June 20, 2021 in the Anschutz Gallery on level 2 of the Hamilton Building.

“Paris to Hollywood will present our visitors with an exclusive look behind the scenes of one of the most famed couples of the mid-to-late 20th century,” said Christoph Heinrich, Frederick and Jan Mayer Director of the Denver Art Museum. “We are honored to present such a monumental selection of Hollywood history through this exhibition, while showcasing the art of fashion and all that goes into the creation of these marvelous and intricate ensembles. We are incredibly grateful to Cecilia Peck Voll for graciously gifting 20 invaluable garments from the exhibition to DAM’s permanent collection following the show’s closure next year, and for sharing her collection with the world for the first time at our museum.”

Born in Paris, France, in 1932, Véronique Passani was a writer for the daily French newspaper France Soir when she met Gregory Peck at the age of 20. Véronique reviewed books, theater performances, exhibitions and “air du temps,” and, despite being a young woman in a patriarchal society, she interviewed high-profile celebrities, including General Eisenhower, Samuel Goldwyn, Albert Schweitzer and the French writer Colette. Peck, arguably the most famous Hollywood actor at the time, was filming Roman Holiday with Audrey Hepburn in Italy when he interviewed with Véronique for France-Soir in Paris. The meeting was the beginning of a love story fit for a cinematic production, culminating in a marriage that lasted nearly five decades until Gregory’s death in 2003.

When Véronique moved from Paris to Hollywood in 1955, she brought with her a nuanced Parisian elegance and quickly became one of the most influential women in Hollywood. As Gregory advocated for civil rights and social justice, through iconic films which condemned racism, anti-Semitism and nuclear proliferation, Veronique vigorously supported his activism and philanthropy. Together they donated and raised millions of dollars for the American Cancer Society, the Motion Picture and Television Fund, the Academy of Motion Picture Art and Sciences, the American Film Institute, the Los Angeles Music Center and the Los Angeles Public Library. In 1967, Véronique’s fundraising and passionate support for the Inner City Cultural Center led to her being named “Woman of the Year” by the Los Angeles Times. Véronique’s close relationships with global designers such as Yves Saint Laurent, Pierre Cardin, Hubert de Givenchy and André Courrèges, as well as Hollywood stars like Princess Grace of Monaco, essentially made her an ambassador between the couturiers of Europe and the Hollywood elite.

“Véronique was, and remains, an exemplary figure of fashion with an emblematic wardrobe,” said curator Müller. “Fashion is a big component of our contemporary culture and how we see the world. Paris to Hollywood is a testament to the history of fashion and to Véronique’s ability to stay on the pulse of fashion and new trends. She amassed a collection of over 300 couture dresses, which she wore to the Oscars, the White House, film premieres and international galas from Paris to Rome, Cannes, New York and Los Angeles. It has truly been an honor to curate this exhibition with looks and documentations from the Peck collection.”

Paris to Hollywood unfolds a romantic journey, illustrating the Pecks’ life as a couple, alongside Véronique’s unique relationship with the most well-known couturiers of the 20th century. A variety of designers from France, Italy, the U.S. and the U.K. will be represented in the exhibition, including Yves Saint Laurent, André Courrèges, Valentino, Balenciaga, Christian Dior, Givenchy, Moschino, Pucci, Guy Laroche, Thea Porter, Pierre Cardin, Jacques Griffe, Jean Louis Scherrer, Rudi Gernreich and Sonia Rykiel.

Divided into nine sections organized thematically and chronologically, the exhibition will display iconic milestones in the history of fashion such as the mini dress and pantsuits of André Courrèges, whose futurist style was celebrated by the fashion magazines in 1965 as the “Courrèges bomb.” Véronique is praised for introducing Courrèges to the U.S. in the 1960s. A selection of dresses, demonstrating the meticulous artistic creativity that went into the creation of these garments, will reveal Véronique’s talent for choosing the best designer pieces, emblematic of each season and occasion. Her wardrobe—which includes many unique samples from the fashion shows of Yves Saint Laurent and Givenchy—is a testament to the fact that leading designers viewed her as a fashion ambassador and influencer of her time. The first presentation of its kind, Paris to Hollywood also will include one of Gregory Peck’s tuxedos, in addition to film clips and never-before-seen family photographs.

"When my parents entered a room, you couldn’t take your eyes off them,” said Cecilia Peck. “They made style look effortless. I think their secret was that they were having fun. They were in love, and you could feel it. They inspired each other and made each other laugh. His eyes were always on her. Their style was a reflection of their love. Thanks to Christoph Heinrich and the Denver Art Museum, especially the extraordinary eye of Florence Müller, I am sharing my mother Veronique’s haute couture with the public for the first time. It’s been a thrilling journey of discovery for all of us."

An illustrated color catalog will accompany Paris to Hollywood, including three essays and an introduction by curator Florence Müller, interviews with Véronique Peck’s friends, Sharon Stone and Laura Dern, conducted by Müller. The catalog also will include biographies of each of the 15 couturiers presented in the exhibition, written by Jane Burke, senior curatorial assistant of textile art and fashion at the DAM. The catalog will feature images of the couture and designer pieces, along with a selection of archival photos, documents, sketches and family photos. The catalog will be available for purchase online and in The Shop at the Denver Art Museum upon the exhibition’s opening.

Paris to Hollywood will be included in general admission, which is free for museum members and youth 18 and under every day. For the latest on new visitation, safety and cleaning procedures, please visit denverartmuseum.org.

Paris to Hollywood: The Fashion and Influence of Véronique and Gregory Peck is organized by the Denver Art Museum and presented by Joy Dinsdale. Additional support is provided by the generous donors to the Annual Fund Leadership Campaign and the residents who support the Scientific and Cultural Facilities District (SCFD). Promotional support is provided by 5280 Magazine and CBS4.

The Denver Art Museum is grateful for the generous funding of the Textile Art and Fashion department by the Avenir Foundation and Nancy Lake Benson.

Denver Art Museum to Spring into Fashion in March 2021 with Paris to Hollywood: The Fashion and Influence of Véronique and Gregory Peck