Frieze New York 2019 Featured Unprecedented Range of Curated Programming and Collaborations with Museum Directors, Highlighting New York’s Role as a Nexus and Catalyst for Ideas and Innovation in the Global Art World 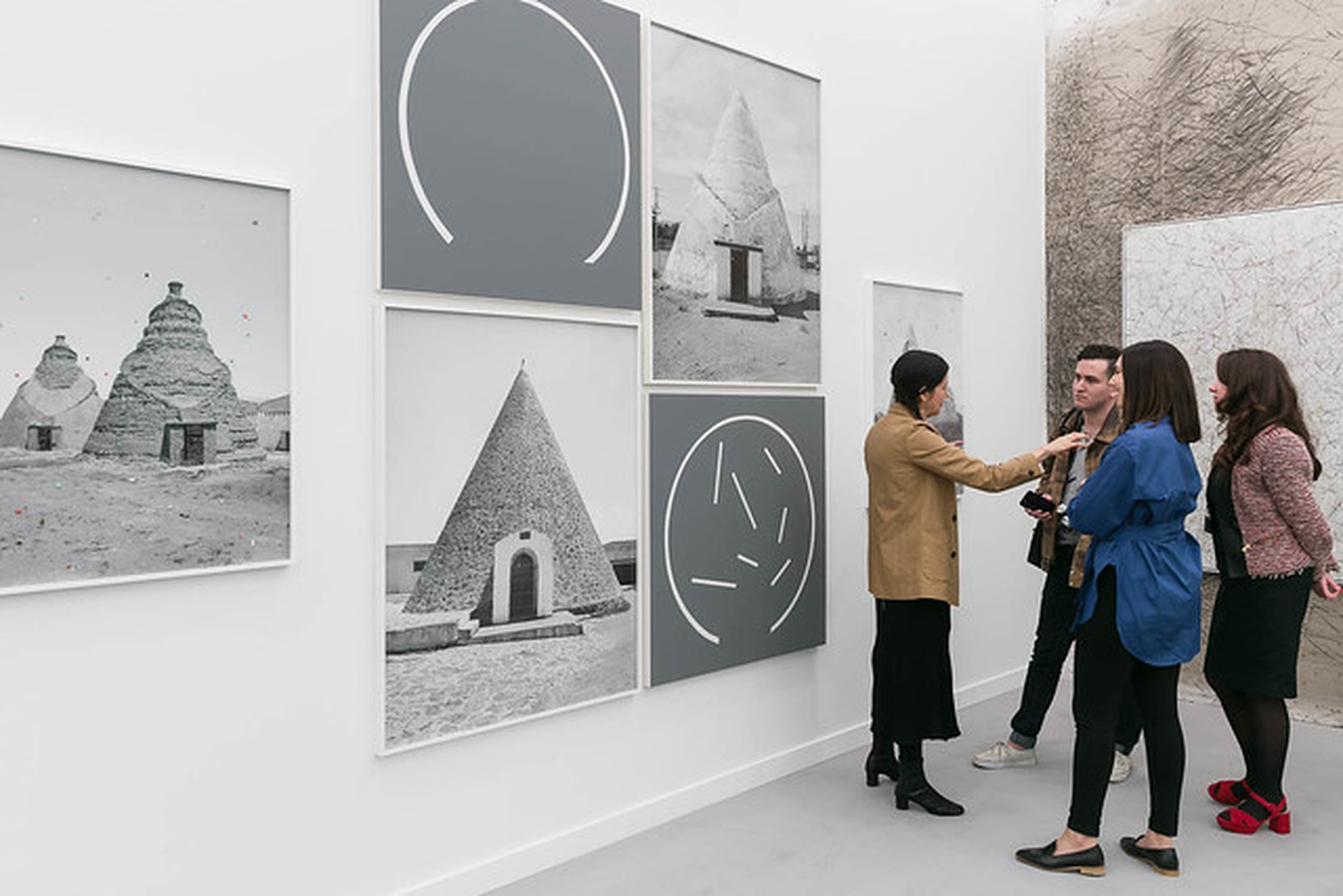 Frieze New York 2019 Featured Unprecedented Range of Curated Programming and Collaborations with Museum Directors, Highlighting New York’s Role as a Nexus and Catalyst for Ideas and Innovation in the Global Art World

Frieze New York closed its eighth edition on Sunday, May 5, having brought together leading galleries from 26 countries, and driven significant sales and acquisitions by major institutions and collectors across a wide range of price points and on every day of the fair. From a strong opening day and throughout the week, the 2019 edition convened collectors, curators, museum groups, and art enthusiasts from around the world, who responded enthusiastically to the energetic atmosphere and the depth and breadth of the presentations. The 2019 edition offered an unparalleled opportunity to discover emerging, underrecognized, and influential artists of the 20th century, alongside today’s most celebrated contemporary artists. Reflecting New York’s role as a nexus and catalyst for innovation and ideas in the art world, Frieze New York expanded its commitment to dynamic curated programming with new curators and an unprecedented number of collaborations with leading museum directors. New programming included two exhibitions exploring virtual reality and the significance of self-taught artists; two new sections celebrating Latin American and LatinX art and New York’s pioneering gallery community; and the launch of Frieze Sculpture at Rockefeller Center, which is open through June 28, 2019. Presented May 2 to 5, 2019 at Randall’s Island Park, Frieze New York was supported by global lead partner Deutsche Bank for the eighth consecutive year.

As a significant platform for galleries at all levels of the market—from the emerging to the internationally established—Frieze New York saw strong sales throughout the week and across every section of the fair with galleries offering works priced from $10 to $10 million. Galleries placed artworks with major private collections and international institutions. Select highlights include: Marlborough Gallery’s sale of The Bus (1995) by Red Grooms for $550,000 in the Spotlight section; Gagosian’s sale of three monumental works by John Chamberlain; and Galerie Thaddaeus Ropac’s sales of a work by Robert Longo for $600,000, a work by Daniel Richter for approximately $290,000; and three Georg Baselitz works: Night of the Nightingale IV (Oboznenko), 1998 for $565,000, and two untitled works for $85,000 each. In the Spotlight section, Galerie Kornfeld placed three major works by Elvira Bach with a museum in China, and additional works to collectors from New York and Hong Kong; and David Zwirner sold all six paintings on view by Harold Ancart, including one to a museum in the United States and one in Asia, as well as several works by Christopher Williams. Kasmin sold six works between $6,500 and $500,000, by Elliott Puckette, Tina Barney, Max Ernst, Alma Allen, and Jan-Ole Schiemann. In the JAM curated section, Sprüth Magers sold works by Senga Nengudi ranging from $30,000 to $45,000. Proxyco placed all works on view by Livia Corona Benjamin in the Diálogos curated section. And Sean Kelly Gallery sold Joint Effort (2019) by José Davila, presented as part of Frieze Sculpture at Rockefeller Center.

For the third year, the Brooklyn Museum acquired work for the museum’s permanent collection through The LIFEWTR Fund. The Brooklyn Museum acquired two major works, both from Los Angeles-based galleries: when no softness came (2019) by Diedrick Brackens at Various Small Fires in the fair’s Frame section; and 13 International Dogs (2019) by Gala Porras-Kim from Commonwealth and Council in the fair’s Diálogos section dedicated to LatinX and Latin American artists. The LIFEWTR Fund builds on the 15-year tradition of museum acquisition funds at Frieze Art Fairs and deepens the partnership between Frieze and LIFEWTR, a premium water brand committed to support and advancing the careers of emerging artists on a global stage.

Komal Shah, trustee of SFMOMA and the Tate Americas Foundation, commented, “It was terrific to see a truly diverse and thoughtful selection of art at Frieze New York this year! The solo presentation of Jenny Holzer at Hauser and Wirth, especially her new redaction paintings, was visually stunning and very relevant to our current times. Other highlights for me ranged from the superbly curated JAM section by Franklin Sirmans, to discovering young artists at Pippi Houldsworth like Jade Fadoujotimi and Stefanie Hienze, as well as the striking solo presentation of Firelei Baez’s works.”

International collectors responded with great enthusiasm to the gallery presentations across Frieze New York, with galleries reporting significant sales on every day of the fair and at a wide range of price points:

Lisa Spellman, founder of 303 Gallery (New York), remarked, “We’ve had a fantastic week at Frieze New York this year. Our team made strong sales each day for the entire run of the show, placing several works in important private and public collections to American and international clients. From the curated sections, down to the restaurant partners and the ferry, every aspect is carefully considered, contributing to a truly unique experience unlike any other fair.”

Thaddaeus Ropac said, “We’ve had great experiences of Frieze New York over the past few years and, despite an ever-competitive climate, it remains one of the key dates in our annual calendar. We saw strong sales, particularly in the opening days with pieces finding homes in the US, EU, and Hong Kong, reflecting the international presence of buyers in attendance. As a platform for future endeavours, the fairs have always provided a critical and engaged audience, enabling institutional dialogue and opening up exciting opportunities for our artists that we look forward to developing in the near future.”

Daniel Roesler, Partner and Senior Director of Galeria Nara Roesler (Buenos Aires) said, “We are thrilled with this year’s edition of Frieze New York. We had a tremendous response to the solo project which we invited Carlito Carvalhosa to create for our stand. By Friday all of the works which make up the installation had been placed in exceptional US and Latin American private collections. It was a pleasure to present a powerful new statement by a great Brazilian artist to the global audiences of Frieze.”

David Kordansky said, “I continue to be impressed by the serious group of international collectors who make the annual trek to Frieze New York, as well as the evolution of the fair’s curatorial rigor. We were proud to add timely Southern California history to this dialogue: our solo presentation of Fred Eversley’s cosmic resin sculptures from 196984 received a strong and inspiring response, as did Lauren Halsey’s ambitious new carved columns for the Frieze Artist Award, honoring South Central LA and the late Nipsey Hussle.”

Maureen Paley commented, “The Frieze fair in New York this year allowed us to create a platform for emerging artists like Felipe Baeza, Paulo Nimer Pjota and Max Hooper Schneider alongside our more established artists like Wolfgang Tillmans and Gillian Wearing opening up new possibilities and beginnings for everyone in the program. This diversity suits the fair and the collectors it attracts.”

Enrico Polato, founder of Capsule Shanghai said, “I am very excited about the response to our solo booth with Sarah Faux at Frieze this year. As a young gallery from China making its debut in New York, I’ve been thrilled by the warm welcome of public and press. The new cutcanvas collages are a new direction in Sarah’s practice, and I’ve had such positive feedback over the last few days from collectors who were already familiar with her work, with strong sales stretching from Asia, Europe and the States. Frieze New York has been one of the best fairs I’ve taken part in and a unique opportunity to start a dialogue with local institutions and curators.”

David Maupin, co-founder of Lehmann Maupin (New York, Hong Kong, Seoul) commented, “Frieze New York allowed us to debut two new artists to the gallery: Lari Pittman and Helen Pashgian. Both are distinct in perspective, identity, and material, and our ability to place their work speaks to the overall success of the fair. The New York fair also gave us the opportunity to feature Nari Ward, a longtime artist of the gallery, and the focus of a major retrospective currently on view at the New Museum. Within the first hour, we made significant sales to both private and public collections, including the sale of a Nari Ward piece We the People (Arabic version) that went to an important UAE institution a well-deserved placement.”

Josh Lilley said, “We made a significant commitment to the booth this year, creating a unique and immersive experience for the audience. Brian Bress’s work requires major costs up front, so we were at first relieved, and then delighted with how the past few days have gone. Established and new collectors have bought works, and we have met some leading curators from the US and Asia.”

Andrew Edlin, founder of Andrew Edlin Gallery (New York) and CEO of the Outsider Art Fair said, “Our solo booth for Dan Miller has been an overwhelming success for the gallery this year. Literally, it could not have gone better.”

This year additionally marked the launch of Frieze Sculpture at Rockefeller Center, created in partnership with Tishman Speyer. Brett Littman (Director of the Isamu Noguchi Foundation and Garden Museum in Long Island City, New York), oversees the new public art initiative. Open through June 28, 2019, Frieze Sculpture at Rockefeller Center is free and open to all, and features many artists presenting public sculpture in New York for the first time.