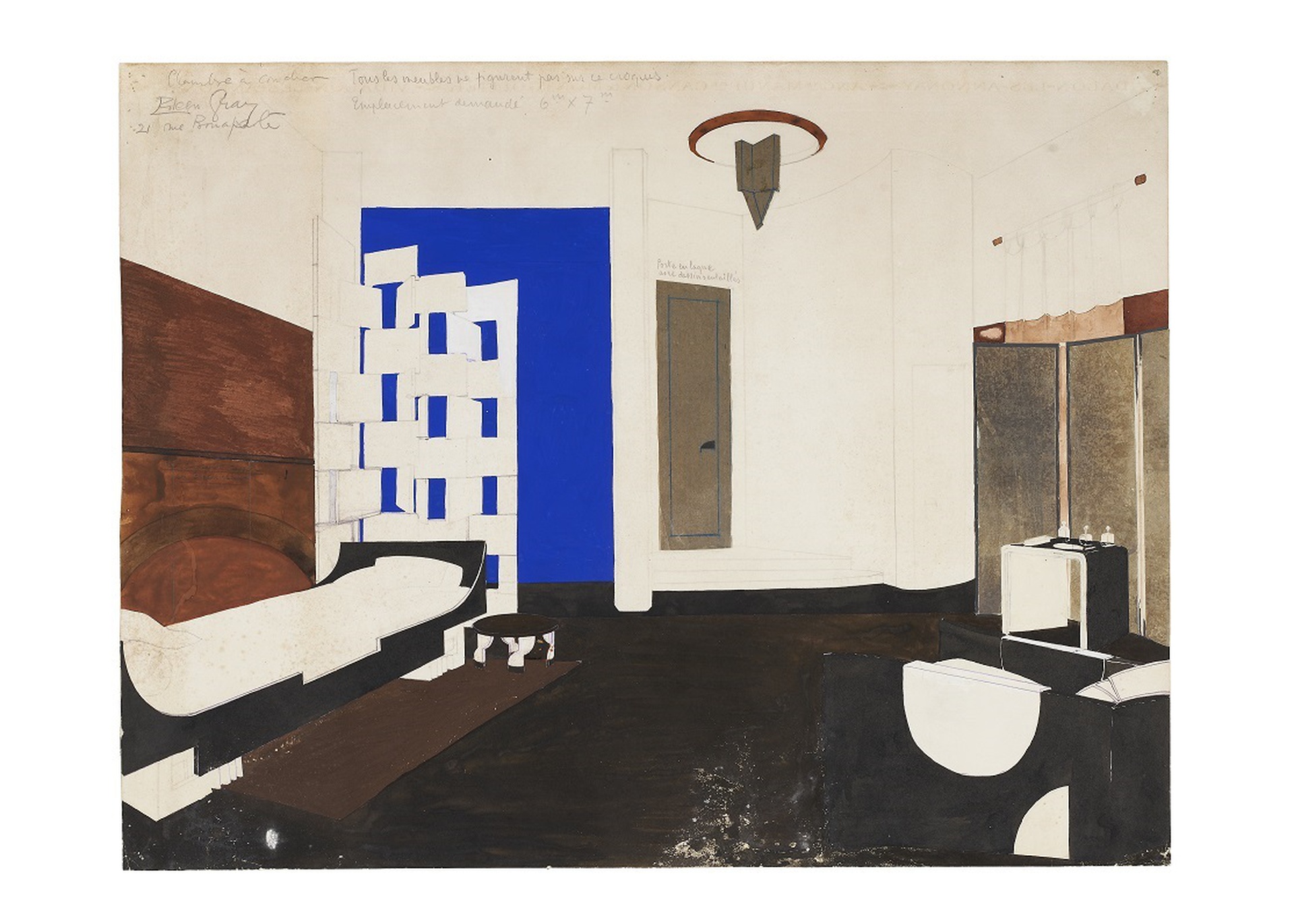 Eileen Gray—on view at the Bard Graduate Center Gallery, located at 18 West 86th Street in New York City, from February 29 through July 12, 2020—is the first in-depth exhibition in the United States to examine the total oeuvre of designer and architect Eileen Gray (1878-1976). The exhibition, curated by Cloé Pitiot, is comprised of approximately 200 works, including never before publicly exhibited furniture, lacquer works, architectural drawings, and archival materials. The exhibition offers new insights about Gray’s long and distinguished career that began in the early 1900s and continued until her death in 1976, with particular attention to her practice as an architect. Rarely seen architectural drawings and photographs elucidate how Gray designed her most famous house, E 1027, and other architectural projects.

Eileen Gray continues the Bard Graduate Center Gallery’s longstanding commitment to examining under-recognized figures in modern architecture and design, particularly women, such as Aino Marsio-Aalto and Armi Ratia, as well as lesser-known aspects of renowned figures, such as Le Corbusier.

Eileen Gray was a pioneer in modern design and architecture, and one of the few women to practice professionally in those fields before World War II. Born into a distinguished, upper-class household in Ireland in 1878, Gray spent her childhood between her family home, Brownswood House, in Ireland, and the family’s residence in the South Kensington district of London. In her early twenties she studied at the Slade School of Art in London, where she met artists Wyndham Lewis, Kathleen Bruce, Jessie Gavin, and Jessica Dismorr. Gray also developed at this time an interest in traditional Asian lacquer and studied briefly with Charles Dean, of whom little is known. By 1902, Gray tired of the London scene and moved to Paris to continue her art training at the Académie Colarossi and Académie Julian. By 1910, Gray and her fellow Slade School friend, Evelyn Wyld, established a workshop to produce carpets and wall hangings. Gray also continued her study of traditional lacquer with Japanese craftsman Seizo Sugawara, with whom she formed a successful partnership. In 1922, she opened her Paris shop, Galerie Jean Désert, at 217, rue du Faubourg-Saint-Honoré, where she sold furniture and rugs. The Galerie also served as an exhibition space for modern art, making Gray, albeit working under a male pseudonym, one of the first women gallerists. During this period, Gray also offered interior design services, and her facility with architectural space was evident in the environments she designed for clients such as Juliette Lévy, the Maharajah of Indore, Jacques Doucet, and others. Gray’s rugs demonstrated her creativity with geometric forms, and by the early 1920s, she was designing furnishings in tubular metal and other modern materials. From the 1920s onward, and throughout the rest of her life, Gray produced architectural projects for private and public commissions, including homes for her own use in France: E 1027 (1926–29) in Roquebrune-Cap-Martin, Tempe a Pailla (1931–34) in Menton, and Villa Lou Pérou (1954–58) in St. Tropez. In 1976, Eileen Gray died in Paris at the age of 98.

According to BGC Gallery Director Nina Stritzler-Levine, “Eileen Gray remains fundamentally underestimated or misunderstood by most critics and historians. The exhibition will assert unequivocally that Eileen Gray was an architect working in different typologies. Thanks to recent archival discoveries and research, the BGC exhibition presents a comprehensive view of her work and artistic vision. We are thrilled to have the Centre Georges Pompidou as our partner and are grateful to them, to the National Museum of Ireland, and to an international group of private collectors for providing loans to the exhibition.”

The exhibition draws on loans from the Centre Georges Pompidou in Paris, the National Museum of Ireland, the Irish Architectural Archive, the Maryhill Museum of Art, the Metropolitan Museum of Art, the Museum of Modern Art, the Virginia Museum of Fine Arts in Richmond, and the Musée des Arts Décoratifs in Paris. Private lenders include Galerie Jacques De Vos, Galerie Anne-Sophie Duval, Galerie Gilles Peyroulet, and Galerie Vallois, as well as several anonymous lenders.

Eileen Gray has been organized by Centre Pompidou, Paris, in collaboration with Bard Graduate Center.

Eileen Gray is organized in five thematic sections that consider critical stages of Gray’s career. It begins with her early training as a painter in London at the dawn of the twentieth century, alongside contemporaries such as Wyndham Lewis, and her arrival in France in 1902, where she would spend the rest of her life. It follows her early experiments in lacquer and weaving, and the establishment of Galerie Jean Désert in Paris. Special emphasis is given to her practice as an architect. Throughout the exhibition, Gray’s seminal works are presented alongside a rich trove of photographic and archival documents, some never before shown in public.

A chronological overview of Gray’s life, inclusive of her many travels and her connections to artists, writers, and poets, including Auguste Rodin, Natalie Clifford Barney, Jacques Doucet, Loïe Fuller, Aleister Crowley, Stephen Haweis, and Wyndham Lewis, will ground the introduction to the exhibition.

Beginning with Gray’s early formation as an Irish-born artist who studied painting at the Slade School in London, this section will also explore her pivotal decision to move to Paris, where she could pursue greater freedom as a woman artist. It is here where she continued her artistic training, established a weaving workshop with Evelyn Wyld, and met Seizo Sugawara, with whom she produced lacquer wares utilizing the traditional Japanese technique. Works on display in this section include a major loan of a study of a nude, one of Gray’s only extant early drawings; a lacquer screen; and Oriental Mountebanks, a recently rediscovered lacquer panel, originally exhibited at the 1915 San Francisco Panama-Pacific International Exhibition.

This section of the exhibition is dedicated to the Parisian retail store and gallery, Galerie Jean Désert, which Gray owned and directed at 21, rue du Faubourg-Saint-Honoré from 1921 to 1930. Gray used a male pseudonym for the name of the gallery, where she sold her drawings, paintings, and photographs. The space doubled as a showroom for her own work, paving the way for her rise as a designer. Three carpets designed by Gray, along with her notes and gouache carpet designs, and examples of furniture sold in the shop will be on display.

This exhibition reveals Gray’s remarkable versatility as a designer of many types of furniture. It also considers her contribution as a designer of interiors. She explored the use of exotic materials, experimented with new furniture forms, and used furniture to manipulate space. Gray’s clients included the collector and couturier Jacques Doucet (1913) and Juliette Lévy, a milliner and owner of the celebrated Parisian boutique, J. Suzanne Talbot (1919 and 1930).

Also on display are a lacquer table, a banquette, and a block screen from Gray’s Chambre à coucher boudoir pour Monte-Carlo, an interior installation she debuted at the 1923 Salon des Artistes Décorateurs, presented alongside a recently rediscovered drawing of the room with her handwritten notes, now in the collection of the Musée des Arts Décoratifs in Paris.

A major turning point in Gray’s career came when she met the Romanian-born architect Jean Badovici. Together, they experimented with ideas about modern and vernacular architecture, and worked on L’Architecture Vivante, one of the first French magazines devoted exclusively to modern architecture. Their work resulted in key projects in the French village of Vézelay, such as the Renaudin family home (1925) and Badovici’s own house and studio (1927–31). Gray also designed Badovici’s Parisian apartment. This section also explores the influence of De Stijl as well as her reception in architectural journals of the period, such as Wendingen.

The multiple facets of E 1027 (1926–29)—an iconic work of modern architecture—are presented through drawings, photographs, and furniture. Located on a dramatic site above the Bay of Monaco in Roquebrune-Cap-Martin, Gray created furniture for the house that elucidates her unique approach to modern design. Gray articulated her perspective in a special issue of L’Architecture Vivante dedicated to the house.

This gallery features eleven pieces of furniture Gray designed specifically for E 1027, including the Fauteuil transat (Transat chair), an adjustable side table, and a recently conserved dressing table with pivoting drawers.

The final section of the exhibition traces the trajectory of Gray’s architectural practice. Widely celebrated for E 1027, the majority of Gray’s architectural work has been largely under-examined. The number and diversity of her architectural projects, mostly unrealized, are presented typologically: residential projects, social architecture, exhibition architecture, and urban projects. Together they reveal Gray’s range and inventiveness and her approach to modern architecture. Through archival documents, drawings (plans, sections, elevations), and models, this under-recognized aspect of Gray’s career is brought to public attention for the first time in the United States.

The exhibition presents twelve of forty-four architectural projects examined in the exhibition catalogue. These include major residential projects realized in France between 1926 and 1934, all homes, either for her own use, or for architect Jean Badovici: E 1027 (1926–29), Roquebrunne–Cap Martine; Battachon/Renaudin House, Vézelay (1926–32); and Tempe a Pailla (1931–34), Menton; as well as apartments she designed for Jean Badovici on rue Châteaubriand, Paris (1929–31) and her own apartment on rue Bonaparte, Paris, where she lived for much of her life. In addition, the exhibition presents a number of unrealized residential projects, such as the House for an Engineer (1926); House for Two Sculptors (1933–34); Ellipse House (1936), and an extensive project in Dakar (ca. 1940). A number of Gray’s unbuilt social architecture projects will also be presented including a demountable Camping Tent (1930–31), a Vacation and Leisure Centre (1936–37), and a Cultural and Social Center (1946–47).

The exhibition is accompanied by a fully-illustrated catalogue designed by Irma Boom and distributed by Yale University Press. Essays are organized in three sections: “Beginnings,” which focuses on Gray’s early life and training; “Being a Designer,” which examines her career as a designer of furniture, rugs, and interiors; and “Being an Architect,” which responds to the prevailing question of whether Eileen Gray was an architect with a resounding “yes”. This section features more than 44 catalogue entries on Gray’s architectural work organized by typology. It focuses on the diversity of Gray’s design practices and elaborates on the range of her architectural projects. Edited by Cloé Pitiot and Nina Stritzler-Levine, the volume contains contributions by the editors, as well as by Renaud Barrès, Caroline Constant, Philippe Garner, Jennifer Goff, Anne Jacquin, Fréderic Migayrou, Frances Spalding, Ruth Starr. It also features more than 200 illustrations, including reproductions of the archival materials presented in the exhibition, extensive texts on Gray’s design work, previously unpublished architectural drawings, a chronology documenting the key moments of Gray’s life and career, critical encounters, and her worldwide travels.