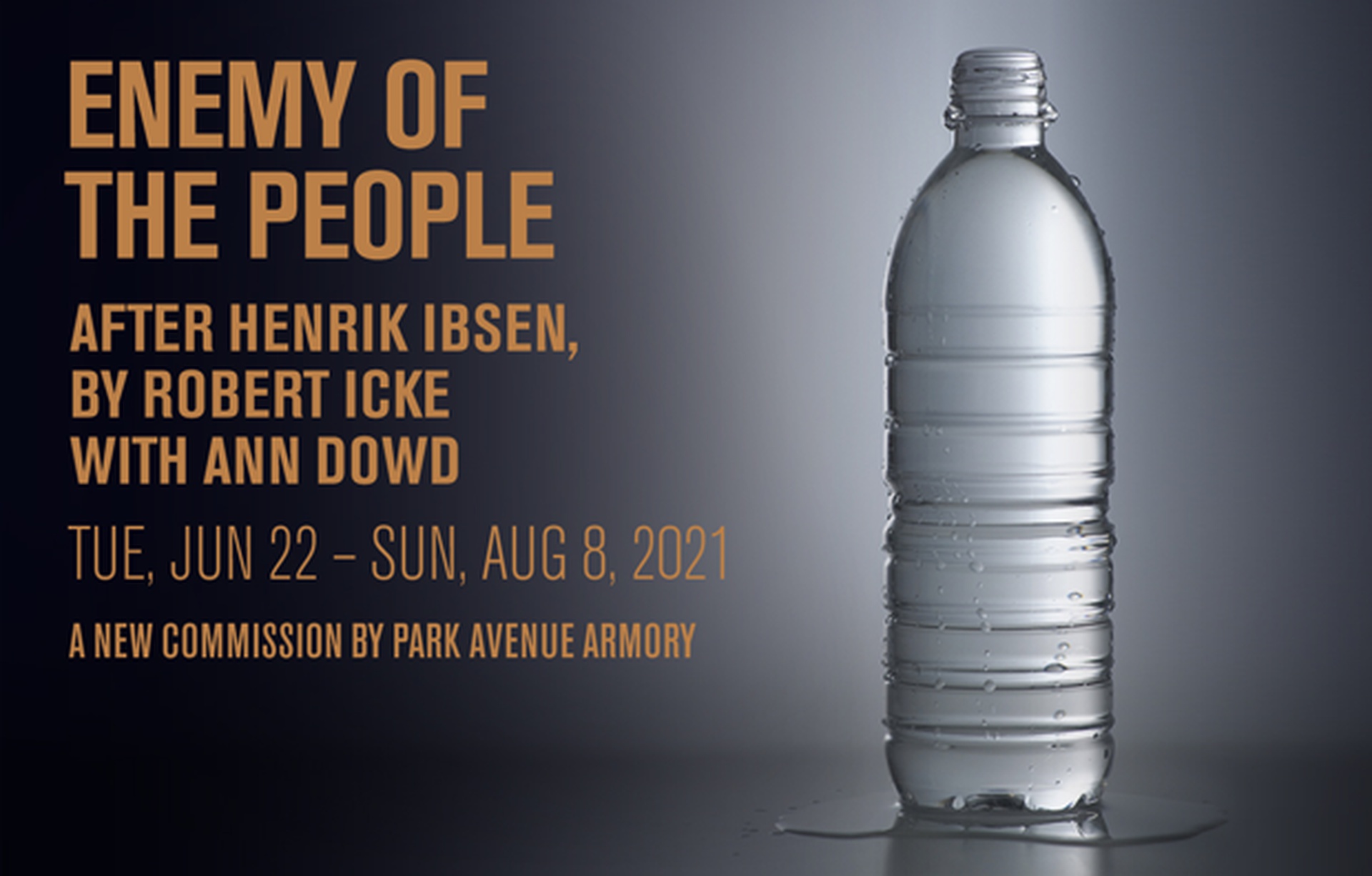 Building on the institution’s commitment to presenting spectacular, unconventional productions that cannot be mounted in traditional theaters, Park Avenue Armory announces the fourth commissioned work in its Social Distance Hall series: the world premiere of Enemy of the People, written by Henrik Ibsen and adapted by the groundbreaking director and playwright Robert Icke (1984, The Doctor, Mary Stuart, Hamlet, Oresteia and Oedipus). As conceived by Robert Icke, the play weaves a tale of morality, suspense, and controversy, with multiple characters represented by a single actor – Emmy award winning actor Ann Dowd (The Handmaid’s Tale).

Commissioned by Park Avenue Armory and developed during the pandemic, the play centers on a small former manufacturing town that has been revitalized as a resort destination due to its natural hot springs. When a scientist, who is the sister of the town’s Mayor, finds that the water is contaminated and the baths must be shut down, a democratic society confronts, in public and in private, a complex ethical crisis. The audience, sitting in pods of friends or family, will be invited to vote at critical moments of the story – and the majority vote will determine the play’s direction at each juncture.

“Since its launch, the Drill Hall has served as a powerful instrument that has both informed and enabled the work we have commissioned from artists as they pursue ambitious visions,” said Rebecca Robertson, Founding President and Executive Producer at Park Avenue Armory. “We are thrilled to be offering the Armory’s Wade Thompson Drill Hall as a place to safely deliver extraordinary works of live performance and to once again engage audiences in visceral and meaningful ways.”

“Robert Icke has created a play that is as relevant and disturbing today as it was a century and a half ago. It also directly engages the audience in the interplay of individual action and collective responsibility in a very visceral way,” stated Pierre Audi, the Armory’s Marina Kellen French Artistic Director. “The transitional season we commissioned for Social Distance Hall represents the wide range of work which is the Armory’s hallmark: dance, performance art, music and now theater. And in its own way, each production approaches a moment of transition and transformation for the performing arts and us as a society. Enemy of the People is a reimagining of a classic work that reveals issues that are timeless.”

“Ibsen’s play asks big questions that still have no easy answers: about democracy and debate, about votes and majorities, and about how in an increasingly online, increasingly divided world, we might all live together. I’m excited to bring our new version to audiences at the Armory,” said Robert Icke.

Enemy of the People is the fourth production of Social Distance Hall, which launched with SOCIAL! the social distance dance club, conceived by Steven Hoggett, Christine Jones, and David Byrne, followed by Party in the Bardo, a collaboration between Laurie Anderson and Jason Moran, and Afterwardsness by Bill T. Jones (running through May 26). Social Distance Hall provides artists with the space and resources to create and present new works safely to live audiences during the pandemic. The Armory, with its immense Drill Hall and multiple airy rooms and entrances—featuring an air volume comparable to being outdoors—has provided a pathway and model for the re-opening of the performing arts in New York and beyond.

Enemy of the People

Enemy of the People

After Ibsen, by Robert Icke

The well-being of our staff, artists and audience is our top priority. The Armory has put in place rigorous COVID-19-related protocols that will comply or exceed the New York State Regulations.

As noted above, in Enemy of the People, the audience, arranged in pods of friends or family, is cast as the public. Each pod [bubble] is seated at their own table with a voting mechanism and will be invited as a group to vote at critical moments of the story. The majority vote will determine the play’s direction at each juncture.

Tickets will be sold in pods of two to five attendees. Each pod will be seated at an individual table. There will be no single ticket sales for this production.

Citi and Bloomberg Philanthropies are the Armory’s 2021 Season Sponsors.

The Social Distance Hall is supported in part by The Kaplen Brothers Fund.

Robert Icke is an award-winning writer and theatre director best known for his modern adaptations of classic texts. Recent original productions include Oedipus and After Nora at Internationaal Theater Amsterdam (2020, 2018), and The Doctor, based on Arthur Schnitzler’s Professor Bernhardi at the Almeida Theatre in London (2019). Other recent productions include Anton Chekhov’s Ivanov at Schauspiel Stuttgart (2019) and William Shakespeare’s Hamlet at the Almeida Theatre and West End (2017).

In 2018, Icke won the Kurt Hübner Award for his debut production in Germany, an adaptation of Oresteia, and was elected Fellow of the Royal Society of Literature. He is the youngest ever winner of the Olivier Award for ‘Best Director’ for Oresteia (2015), which also won the ‘Best Director’ prize at both the Critics’ Circle and Evening Standard Theatre Awards.

Ann Dowd, a veteran stage and screen actress, was the recipient of the 2017 Emmy Award for ‘Outstanding Supporting Actress in a Drama Series’ for her performance as “Aunt Lydia” on Hulu’s The Handmaid’s Tale. For her work on the hit show, now in its fourth season, Dowd has also won a 2017 Critics’ Choice Award and was nominated for a 2018 Golden Globe award and multiple Screen Actors Guild awards, plus a second Emmy nomination in 2018. Dowd also received a 2017 Emmy nomination for her portrayal of "Patty Levin" on the beloved HBO series The Leftovers, a role she portrayed for three seasons.

On the Broadway stage, Dowd has appeared in “The Seagull” with Kristen Scott Thomas and Carey Mulligan, “Taking Sides” with Ed Harris, Elizabeth Marvel and Michael Stuhlbarg and “Candida" alongside Robert Sean Leonard and Mary Steenburgen for which she received the Clarence Derwent Award given to the season's most promising newcomer. Dowd has also starred in notable Off Broadway and regional productions of "Night Is A Room," "The Normal Heart," "Doubt," and "Blood from a Stone" with Ethan Hawke and Natasha Lyonne.

For her work on the big screen, Dowd was the recipient of a Best Supporting Actress award from the National Board of Review for her performance in Craig Zobel’s psychological thriller Compliance. She was also nominated for an Independent Spirit Award and Critics’ Choice Award for the role. Additional film roles include Hereditary, American Animals, Captain Fantastic, St. Vincent, Marley & Me, Garden State, Flags of Our Fathers and Philadelphia. Her notable TV roles include the award-winning Foxtel series Lambs of God, Olive Kitteridge, recurring roles on Good Behavior, Masters of Sex, Quarry, Nothing Sacred, Judging Amy, Third Watch, Freaks and Geeks, and appearances on At Home with Amy Sedaris, True Detective, Louie, Girls, House, Chicago Hope, The X-Files, and NYPD Blue.

Dowd will next be seen in the feature film MASS, written and directed by Fran Kranz, scheduled for release this fall.