Featuring sculptural collaborations by artist Glenn Kaino and Smith, an exclusive cut of a forthcoming documentary, and objects from Smith’s archives 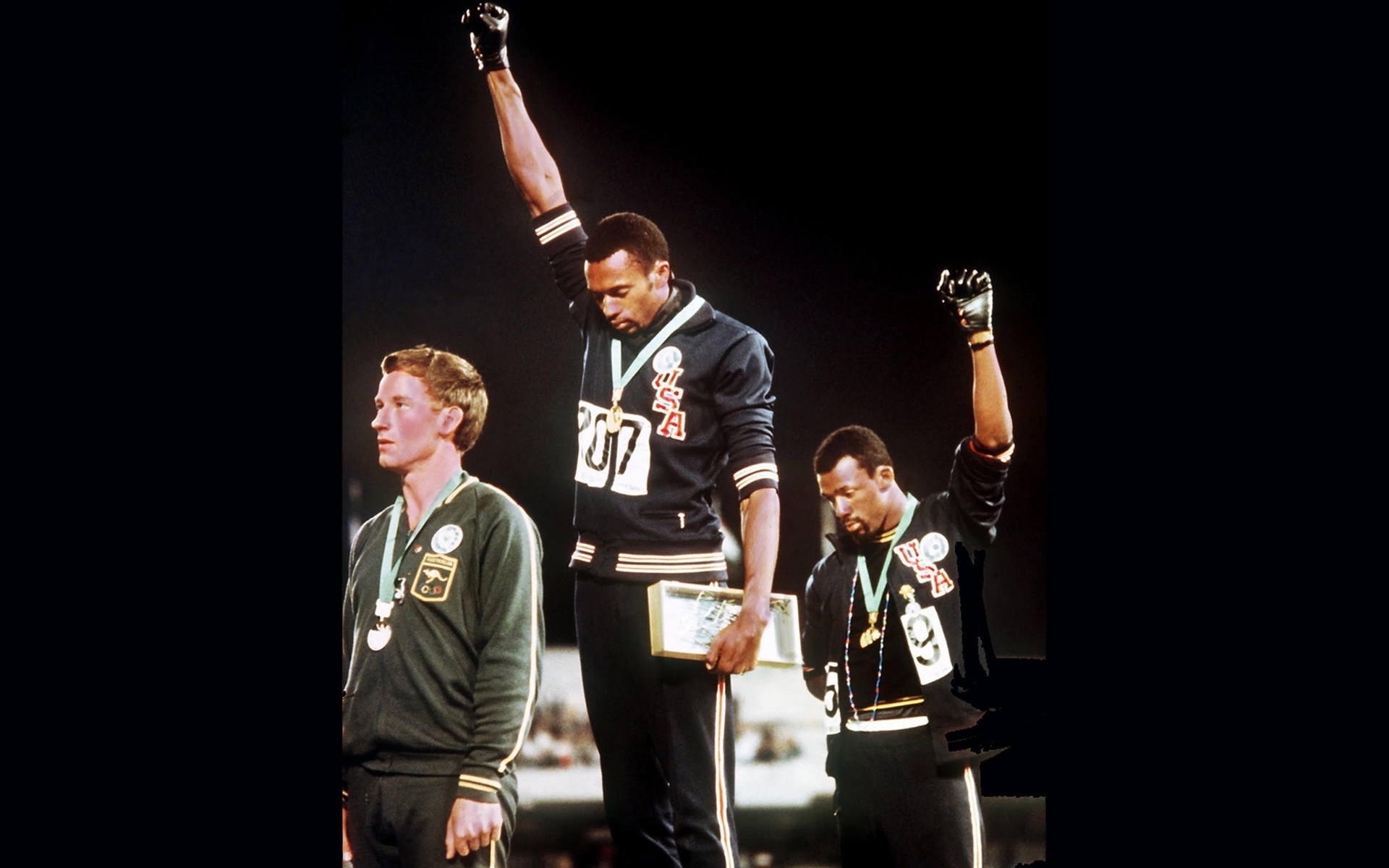 Featuring sculptural collaborations by artist Glenn Kaino and Smith, an exclusive cut of a forthcoming documentary, and objects from Smith’s archives

A half century before NFL quarterback Colin Kaepernick took a knee, Olympic gold-medal sprinter Tommie Smith raised a gloved fist. Smith made his historic gesture at the 1968 Summer Olympic Games in Mexico City to protest human rights abuses around the world and bring international attention to the struggle for civil rights in the United States. His act of protest, and its reverberations over the past 50 years, are explored in “With Drawn Arms: Glenn Kaino and Tommie Smith,” an exhibition organized by the High Museum of Art (Sept. 29, 2018–Feb. 3, 2019).

The exhibition, which will introduce several new works, is the culmination of a multiyear collaboration between Los Angeles–based conceptual artist Glenn Kaino (American, born 1972) and Smith (American, born 1944), who lives in Stone Mountain, Ga. “With Drawn Arms” will feature sculptural installations and drawings by Kaino and Smith, excerpts from an original documentary about Smith’s life and his collaboration with Kaino (directed by Kaino and Afshin Shahidi), objects from the Tommie Smith Archives, and a series of drawings contributed by students from across the United States. By bridging the past and present, the exhibition powerfully resonates in the current moment of reckoning with racial injustice in America.

“Glenn so poignantly celebrates Tommie’s story through this project, and the artworks and film encourage us to reflect on the power of the individual to effect change. We look forward to bringing the Atlanta community together to commemorate Tommie’s act of bravery and examine the power of protest in our lifetime,” said Rand Suffolk, the High’s Nancy and Holcombe T. Green, Jr., director.

“There may be no other event in the 20th century that so powerfully speaks to our present moment of confrontation with the endemic racism and inequality that persist in society today,” said Michael Rooks, the High’s Wieland Family curator of modern and contemporary art. “The combination of Glenn’s activist art and Tommie’s heroic fortitude and resilience in the face of overwhelming adversity amplifies a young generation’s rising call for social justice.”

When they met in 2013, Kaino observed that Smith was living in a “time bubble” centered around his record-setting race and iconic salute. Their meetings inspired sculptural collaborations that allow Smith to symbolically step outside his internal perspective and, in Kaino’s words, “become a witness for the first time to the rich history that he inspired.”

That history and its influence are deconstructed and studied in depth through the exhibition and documentary, which connect Smith’s silent but meaningful gesture to the critical moments and most important voices of today and explore the nature of images, symbols and symbolic action.

“The image of Tommie’s silent protest on the victory stand has become an iconic symbol of resistance and unity for generations. Our goal with this project is to ensure that Tommie’s message resonates for years to come,” said Kaino.

Segments from the documentary film project, excerpted specifically for the exhibition, will be shown in a dedicated gallery at timed intervals. Visionary artist and producer John Legend; his partners Mike Jackson and Ty Stiklorius; and actor, activist and humanitarian Jesse Williams serve as executive producers for the film.

Also on view will be Kaino and Smith’s first collaborative sculptural work, “Bridge” (2013). The 100-foot-long serpentine sculpture, made from gold-painted casts of Smith’s arm suspended in the air, represents a path connected to the past that leads forward from the present. The work opens up the salute for new interpretation, reconciles a historic record and honors the personal memory of Smith’s momentous action.

The exhibition will also feature Kaino’s “19.83” (2013), a steel-and-gold-plated, life-size re-creation of the Olympic medal podium on which Smith stood, presented with related prints and drawings depicting frame-by-frame images of Smith’s race. Also included are altered images that critically examine the language constructed in the July 1968 Newsweek cover that labeled Smith “The Angry Black Athlete,” published months before the Summer Olympic Games.

The exhibition will debut Kaino’s sculpture “Invisible Man (Salute)” (2018), a life-size likeness of Smith with his fist raised, made of blackened aluminum and mirrored stainless steel. From the back, the sculpture is lifelike in its detail of Smith’s track suit-clad figure. From the front, Smith’s body becomes a mirrored plane in which visitors see themselves reflected, thus contextualizing each individual’s experience within a continuum of history since 1968.

The exhibition showcases numerous objects from Smith’s archives, comprising personal photographs, artifacts from his time as an athlete and documents from his later life as a civil rights activist.

To further connect Smith’s historic gesture to the present day, Smith and Kaino hosted drawing workshops at American University (Washington, D.C.), Creekside High School (Fulton County, Georgia), and the San José Museum of Art (San José, California), where student collaborators learned about the history of Smith’s salute and drew individual frames from his race. Those drawings will debut in the exhibition.

“With Drawn Arms: Glenn Kaino and Tommie Smith” will be presented on the lobby and second levels of the High’s Anne Cox Chambers Wing.

Artist Glenn Kaino’s career spans a wide range of creative activity. In 2012, he was selected by the U.S. Department of State to represent the United States in the 13th International Cairo Biennale in Cairo, Egypt, and was included in the 2004 Whitney Biennial at the Whitney Museum of American Art, New York; the 12th Lyon Biennial in Lyon, France; and Prospect 3 in New Orleans. He has had numerous solo exhibitions at institutions including the Contemporary Arts Center, Cincinnati; The Andy Warhol Museum; the MCA, San Diego; and the Whitney Museum of American Art. He has also been included in group exhibitions at MOCA, Los Angeles; Los Angeles County Museum of Art; and the Hammer Museum, among others. He co-founded Deep River Gallery and sits on the board of overseers of the Hammer Museum and the board of directors of The Music Center (Los Angeles). Kaino co-produced the hit theatrical production “In & of Itself” with his frequent collaborator Derek DelGaudio, executive producer Neil Patrick Harris and director Frank Oz. Kaino is represented in Chicago by Kavi Gupta Gallery and in Los Angeles by Honor Fraser Gallery.

Dr. Tommie C. Smith is an American athlete who won the gold medal for the 200-meter sprint at the 1968 Summer Olympic Games in Mexico City. His Black Power salute with John Carlos atop the medal podium in protest of human rights abuses in apartheid-era South Africa and Rhodesia, and in solidarity with the struggle for civil rights in the United States, caused a firestorm of criticism and debate, as it was thought to politicize the Olympic Games. Smith’s salute remains an important symbolic moment in the history of the Black Power movement and one of the most powerfully resounding moments of the 20th century. During his track and field career, Smith set seven individual world records and six world records as a member of relay teams at San José State University, where he was coached by Lloyd Winter. With personal records of 10.1 seconds for 100 meters, 19.83 seconds for 200 meters and 44.5 seconds for 400 meters, Smith still ranks among the world’s fastest sprinters. From 1969 through 1971, Smith played wide receiver for the Cincinnati Bengals and also served as head track coach for the Bay Area Striders (1970–72) and Ravenwood High School in Palo Alto, California. In 1972, Smith became assistant athletic director and head coach of track and cross country at Oberlin College, where he also taught sociology. Most recently, he served as a faculty member and track coach at Santa Monica College in Santa Monica, California, until retiring to Stone Mountain, Georgia, in 2005. Smith has been inducted into the National Track and Field Hall of Fame and the California Black Sports Hall of Fame, where he received the Sportsman of the Millennium Award in 1999. In retirement, Smith travels internationally as a speaker and author. His autobiography, “Silent Gesture,” was published in 2007 by Temple University Press.

About the High Museum of Art

Located in the heart of Atlanta, Ga., the High Museum of Art connects with audiences from across the Southeast and around the world through its distinguished collection, dynamic schedule of special exhibitions, and engaging community-focused programs. Housed within facilities designed by Pritzker Prize–winning architects Richard Meier and Renzo Piano, the High features a collection of more than 16,000 works of art, including an extensive anthology of 19th- and 20th-century American fine and decorative arts; major holdings of photography and folk and self-taught work, especially that of artists from the American South; burgeoning collections of modern and contemporary art, including paintings, sculpture, new media and design; a growing collection of African art, with work dating from pre-history through the present; and significant holdings of European paintings and works on paper. The High is dedicated to reflecting the diversity of its communities and offering a variety of exhibitions and educational programs that engage visitors with the world of art, the lives of artists and the creative process. For more information about the High, visit www.high.org.