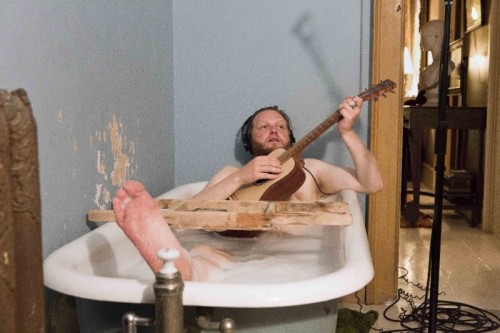 A major exhibition of works by Ragnar Kjartansson exploring the artist’s fascination with America and the American landscape, featuring four video installations, a concert and works on paper, will open at the Museo Nacional Thyssen-Bornemisza (MNTB) on 22 February 2022. Co-organised by Thyssen-Bornemisza Art Contemporary (TBA21) and MNTB, Emotional Landscapes will be installed within the museum’s collections of 19th- and 20th-century American Art, the foremost such holdings in Europe, providing opportunities to explore the interplay between Kjartansson’s work and iconic American imagery.

Emotional Landscapes builds upon TBA21’s 15-year relationship with the artist, throughout which the Foundation has supported his practice through commissions, production, and exhibitions. Drawing its title from Björk’s famous lyrics, Emotional Landscapes includes four video installations from the TBA21 Collection, shown together for the first time: The Visitors (2012), The Man (2010), The End (2009), and God (2007, co-commissioned by TBA21 and The Living Art Museum in Reykjavík). In addition to works from the TBA21 collection, the exhibition also features a series of watercolours on loan from various collections titled From the Valley of World-Weariness in British Columbia (2011). Kicking off TBA21’s 20th anniversary, the exhibition opens with a live concert by Kjartansson.

“We could not think of a more fitting way to celebrate TBA21´s 20-year legacy of collaborating with artists to realise their most ambitious visions, than presenting an exhibition that showcases Ragnar’s incredible boundary-breaking practice, which we have supported vigorously over the years,” says TBA21 Founder Francesca Thyssen-Bornemisza. “Experiencing his works within the context of the American imagery at the Museo Nacional Thyssen-Bornemisza adds a resonant dimension to his art. Taking up the museum´s challenge to find interplay and dialogues between the respective collections is a fascinating voyage in which we revisit both the museum collection and our own activities in today's context. Following the success of Walid Raad’s critical examination of the collection, Ragnar’s exhibition will extend these conversations from a different perspective.”

“Kjartansson’s works are so monumental in size, materiality and subject matter that it’s rare to experience them together,” says Soledad Gutiérrez Rodríguez, TBA21 Chief Curator and curator of Emotional Landscapes. “This exhibition places the works in dialogue with one another, revealing new through lines, and clearly reveals the romance between Kjartansson’s work and iconic depictions of America.”

The exhibition will include the following works, encapsulating Kjartansson’s distinctive practice of durational performance, often combining performance and music with an uncompromised romanticism:

Emotional Landscapes is the seventh exhibition in a five-year collaboration between TBA21 and the Museo Nacional Thyssen-Bornemisza, following most recently Claudia Comte’s After Nature and Walid Raad’s Cotton Under My Feet (on view at MNTB through 23 January 2022).

In addition to the works on view in Emotional Landscapes, TBA21’s collaboration with Kjartansson has also encompassed a number of commissions or co-commissions, including the artist’s monumental, durational performance, The Palace of the Summerland in 2014.

Ragnar Kjartansson draws on the entire arc of art in his performative practice. The history of film, music, theatre, visual culture and literature find their way into his video installations, durational performances, drawing and painting. Pretending and staging become key tools in the artist’s attempt to convey sincere emotion and offer a genuine experience to the audience. Kjartansson’s work has been exhibited widely. His work is currently the subject of a major solo show which inaugurated V-A-C’s GES-2 House of Culture in Moscow. Other recent solo exhibitions and performances have been held at the Kunstmuseum Stuttgart, Metropolitan Museum of Art in New York, Barbican Art Gallery in London, Hirshhorn Museum and Sculpture Garden in Washington DC, Reykjavík Art Museum, Palais de Tokyo in Paris, and New Museum in New York. The artist received the 2019 Ars Fennica Award, and was the recipient of the 2015 Artes Mundi’s Derek Williams Trust Purchase Award, and Performa’s 2011 Malcolm McLaren Award. In 2009, Kjartansson represented Iceland at the Venice Biennale, and in 2013 his work was featured at the Biennale’s main exhibition, The Encyclopedic Palace. Kjartansson was born in 1976 in Reykjavík, and studied at the Iceland Academy of the Arts and The Royal Academy, Stockholm.