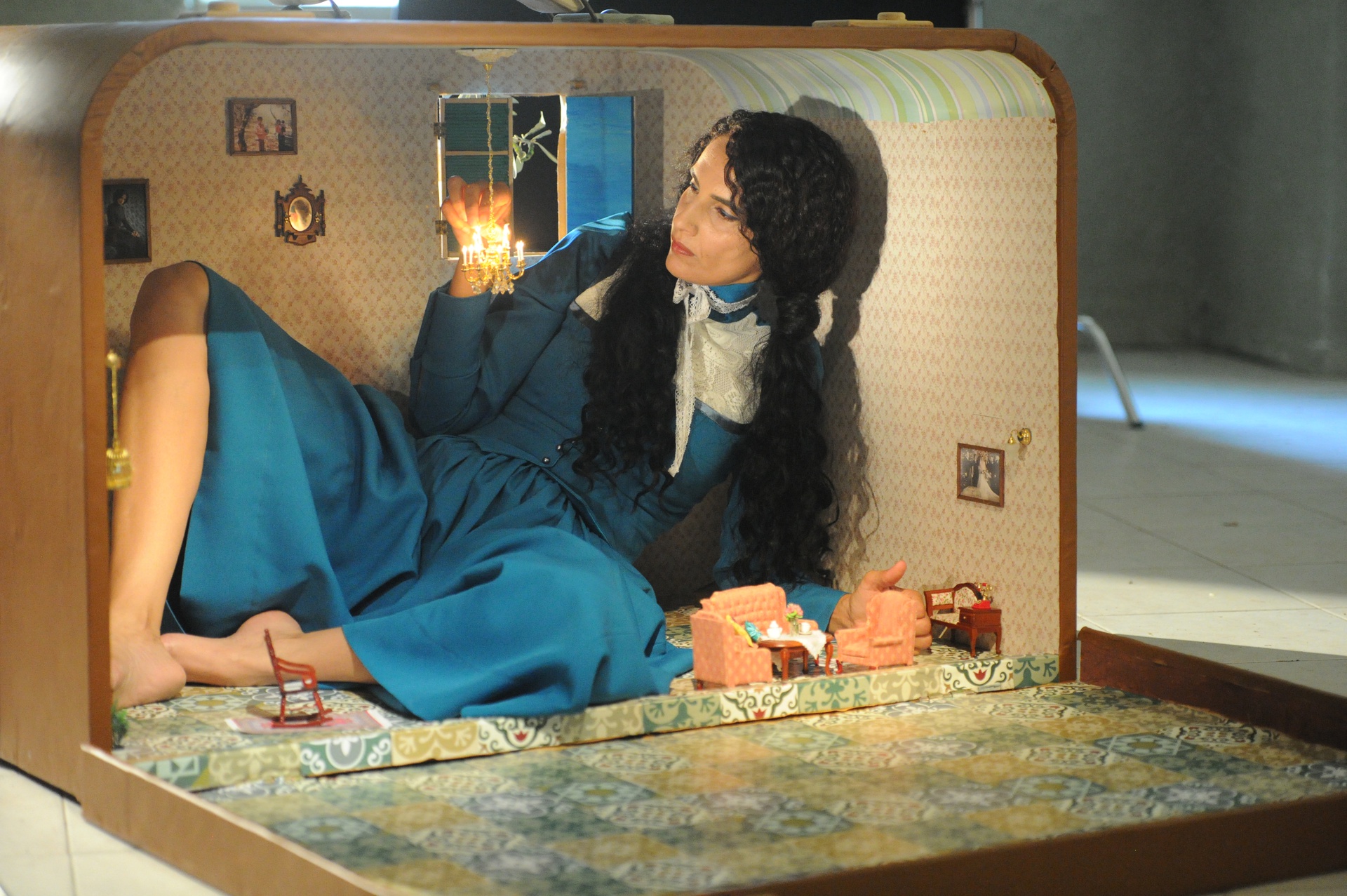 The Israel Museum, Jerusalem will present Raida Adon: Strangeness, an exhibition featuring a single video work by the Palestinian-Israeli artist Raida Adon opening February 21, 2020. Marking Adon’s first solo exhibition at the Museum, Strangeness (2017), an epic and poetic video work lasting over 33 minutes, evokes and addresses universal emotions which transcend geographic and political boundaries, including fragility, stability, wandering, and permanence, in turn restructuring polarized local narratives and discourse in a way that reflects Adon’s own complex identity. Preparatory sketches and a sculptural object from the video work itself will be presented alongside the video piece, which was acquired by the Museum in 2018.

In a sequence of poignant and dream-like images set in a location that is at once surreal and yet rooted in the artist’s local landscape, Strangeness moves between the artist’s personal and collective identities, both Palestinian and Israeli. Operating on two identifiable planes, the groupings of women and men, elderly people and children, who act as a single unit, and the personal depictions of the artist herself, who always appears alone, Strangeness presents a reflection of the artist’s lived experience, aiming to make a powerful universal statement that rises above strife by bridging local and political divides and cultures. Adon handles opposing narratives throughout the video by examining the stories and adding personal, symbolic, and surreal touches to weave a new tale: the story of people—simply people—who are searching for a home. In presenting a range of narratives on both a wider and more personal level, Strangeness offers an alternative reality in which human beings reflect and resemble one another in their most basic and profound yearnings, beyond geographic, religious, and political contexts.

“Strangeness is a work that transcends time and boundaries to present a vision of universal human experience that resonates strongly with the realities of our current world. I am thrilled to have the opportunity to present this work, by such a significant voice in our local arts landscape, at the Israel Museum,” said Ido Bruno, Anne and Jerome Fisher Director of the Israel Museum. “While we originally acquired the work two years ago, this is the first chance that audiences will have to see it publicly at the Museum, and alongside materials that give insight into Adon’s artistic process. This furthers the Museum’s mission to present works from our expansive and diverse collection in new contexts as a means of creating new dialogues, new understandings, and new opportunities for discourse.”

From her unique point of view as a Palestinian-Israeli woman, Adon drew inspiration for Strangeness from footage of Palestinians in the aftermath of the 1948 War of Independence, and from pictures of the deportation of the Jews from Jaffa in 1917 by the Ottoman Empire, intertwining these collective experiences so that it is, at times, hard to differentiate between them in a commentary on time and history. Twelve preparatory drawings by the artist, used to prepare for the filming of the video work, as well as a significant item from the work itself—a suitcase Adon constructed to look like her childhood home that permeates imagery throughout the film—will be shown alongside Strangeness in the gallery.

"Strangeness represents a significant opportunity to present the work of Raida Adon at the Israel Museum, giving a platform and voice to a multifaceted artist who defies boundaries and presents a new perspective on complex local issues and wider universal human experiences,” said Dr. Amitai Mendelsohn, Senior Curator and Head of the David Orgler Department of Israeli Art. “I hope in presenting this work, we can change how populations and individuals in this region look at each other, and show that despite our histories, there are emotions and experiences, including seeking refuge, that tie us all together.”

The exhibition is organized by The Israel Museum, Jerusalem, and will be accompanied by a comprehensive catalogue by curator Dr. Amitai Mendelsohn. The catalogue is trilingual (Hebrew, Arabic, and English) and features essays by Dr. Mendelsohn on Strangeness and a detailed survey of Raida Adon’s video art by Prof. Gannit Ankori of Brandeis University.

Raida Adon is a multimedia artist, director, and actress. Born in November 1972 in Acre, Israel to a Jewish father and a Muslim mother, the artist examines her complex biography, conflicted nations, and the relationship between two interrelated societies in her work. Adon’s practice expresses this duality and explores her multifaceted identity, which shifts between spheres of influence that, though intertwined, preserve and perpetuate power dynamics that reinforce cultural hegemony. Adon is a graduate of the Bezalel Academy of Arts and Design in Jerusalem. Her work has been exhibited at the Tel-Aviv Museum; the Tokyo Art Museum; Mana Contemporary; Kerner Park Art Gallery; The Walled Off Hotel, Bethlehem among many others.