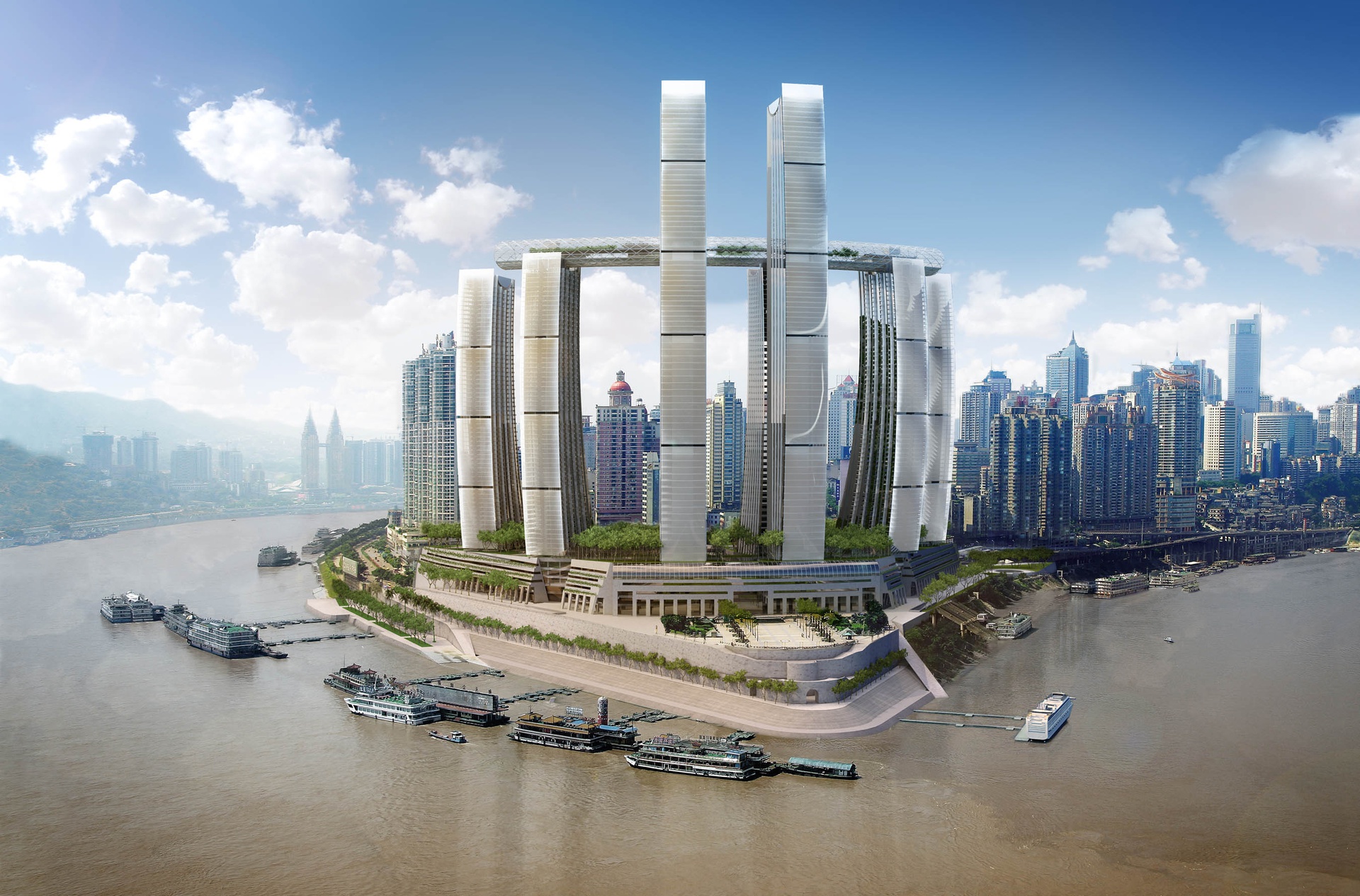 Global Citizen: The Architecture of Moshe Safdie will make its East Coast debut at the National Academy Museum in New York on September 10, 2015. The exhibition, which traces the trajectory of 2015 AIA Gold Medal Recipient Moshe Safdie’s life and work over the course of his more than 50-year career, has been specifically updated for the National Academy presentation and features a new focus on projects devoted to issues of dense urbanism, together with an expanded section exploring the firm’s recent and ongoing work across Asia. Curated by Donald Albrecht, an independent curator and curator of Architecture and Design at the Museum of the City of New York, Global Citizen is on view at the National Academy through January 10, 2016.

In conjunction with the exhibition, the National Academy Museum will sponsor a public conversation on art and architecture, context and culture between Moshe Safdie and acclaimed writer and architecture critic Nicolai Ouroussoff on Thursday, September 24 at The New York Academy of Medicine. Additional public programs during the course of the installation will be announced early in the fall. An updated iteration of the show will subsequently be presented from February 15–May 13, 2016 at BSA Space, Boston’s leading center for architecture and design, and home to the Boston Society of Architects and the BSA Foundation for Architecture.

Comprising more than 175 objects, the revitalized Global Citizen includes significant new content, and a new exhibition design by architect Nader Tehrani, founder of the Boston-based design practice NADAAA. The exhibition is organized into five sections, with each dedicated to pivotal points in the development of Safdie’s design philosophy “progressive contextualism”—the belief that a building should be an extension of its physical, historical, and cultural environments. For its New York premiere, the show will feature a new, introductory chapter installed in the main lobby of the National Academy. Serving as a preamble to the entire show, this new section explores a selection of projects that bracket Safdie’s five-decade commitment to innovative housing: beginning with Habitat ’67 in Montreal, the revolutionary complex that launched Safdie’s international career; to two unbuilt Habitat schemes for New York City, developed in 1967-68; and culminating with the newly opened Sky Habitat Residential Tower in Bishan, Singapore, a 21st century realization of the Habitat concept, illustrated by a model never before on public view.

“Over the course of his career, Moshe has realized the desires and aspirations of a wide range of different communities—and people—he serves, while also confronting the broader challenges of urban life. Global Citizen is as much an exploration of his distinctive work as of the significant role that architecture plays in our daily experience,” said exhibition curator and catalog editor Donald Albrecht. “The re-envisioned exhibition explores in particular what it means to create livable urban spaces, an aspect of Moshe’s career that stretches back to his famous Habitat ’67, and that he is now addressing with renewed vigor in today’s increasingly populous global cities. It has been such a rewarding experience to collaborate with the National Academy to share this important dimension of Moshe’s philosophy and practice with New Yorkers.”

Other notable new projects include Jewel at Changi Airport in Singapore and Raffles City Chongqing in China. Included in the exhibition’s final section, never-before-exhibited materials from these projects explore how Safdie’s early philosophies and unique approach to the challenges of materiality, environmental conditions, and the demographic realities of rapidly growing populations have shaped—and continue to shape—the world’s contemporary urban landscape. Currently under construction and anticipated for completion in 2018, Jewel is a 1.4 million square-foot, mixed-use development at Singapore’s Changi Airport that extends the airport’s principal function from a transit hub to a public gathering space. Uniting airport gathering and functional spaces, retail outlets, an aviation museum, hospitality spaces, and a 24-hour layered garden attraction, Jewel will enhance Changi Airport’s position as a major international aviation hub, create a public gathering space for Singaporeans and international travelers alike, and establish a new model for airports as discrete destinations.

Located on a prominent site at the confluence of the Jialing and Yangtze Rivers, Raffles City Chongqing is a 9 million-square-foot, mixed-use project currently under construction and anticipated for completion in 2017. The project demonstrates Safdie’s emphasis on humanizing the mega-scale sites of the 21st century through the integration of natural light, communal public spaces, parks, and gardens throughout the project. An ensemble of slender towers, arranged in a prow-like arc, contains a mixture of office, residential, and hotel spaces. Bridging the four center towers at level 45 is a 330-yard-long enclosed glass conservatory, containing the hotel public areas and amenities, as well as a public observation deck, which serves as a distinct destination and public gathering space within the complex. At the base of the towers, an expansive park knits together the greenery from the building façades with gardens, pools, and public circulation. This large landscaped park gently slopes to the north, offering dramatic tower-framed views of the water and more intimate views of the city to the south.

“Throughout his career, Moshe Safdie has remained committed to addressing vital issues permeating the contemporary urban landscape in order to create a better functioning, more beautiful, and humane city,” said Carmine Branagan, director of the National Academy Museum & School. “As 2015 AIA Gold Medal Recipient, and following the firm’s recent 50th anniversary, I can think of no better moment to examine and reflect upon Safdie’s remarkable career and indelible impact on the field of architecture. We’re delighted to offer our New York, national, and international audiences the opportunity to discover the evolving body of work of one of our National Academicians and to engage with us in a dialogue on the experience of architecture throughout the world.”

Safdie leads an international architectural and urban planning practice headquartered in Boston, Massachusetts, with offices in Jerusalem, Toronto, Singapore, and Shanghai. “We are honored that Global Citizen will be the first dedicated architectural exhibition at the National Academy Museum,” said Moshe Safdie. “The comprehensive exhibition’s emphasis on dense urbanism is particularly timely for New York today.”

Organized by Crystal Bridges Museum of American Art and the Skirball Cultural Center, the original exhibition was first presented at the National Gallery of Canada, Ottawa, Ontario, in 2010-2011, followed by acclaimed runs at the Skirball Cultural Center, Los Angeles, California, in 2013-2014 and Crystal Bridges Museum, Bentonville, Arkansas, in 2014.

To accompany the expanded exhibition, Scala Publishers is reissuing the sold-out exhibition catalogue with new content by Moshe Safdie, including the text of his Gold Medal acceptance speech at AIA 2015 convention, as well as updated project photography. The 160-page catalogue contains essays by Moshe Safdie; Donald Albrecht; and critic, historian, and theorist of modern and contemporary architecture Sarah Williams Goldhagen.

The exhibition’s first major public program will be a special discussion between Moshe Safdie and architecture critic and writer Nicolai Ouroussoff that will take place on September 24 from 6–8 pm at Hosack Hall at The New York Academy of Medicine.