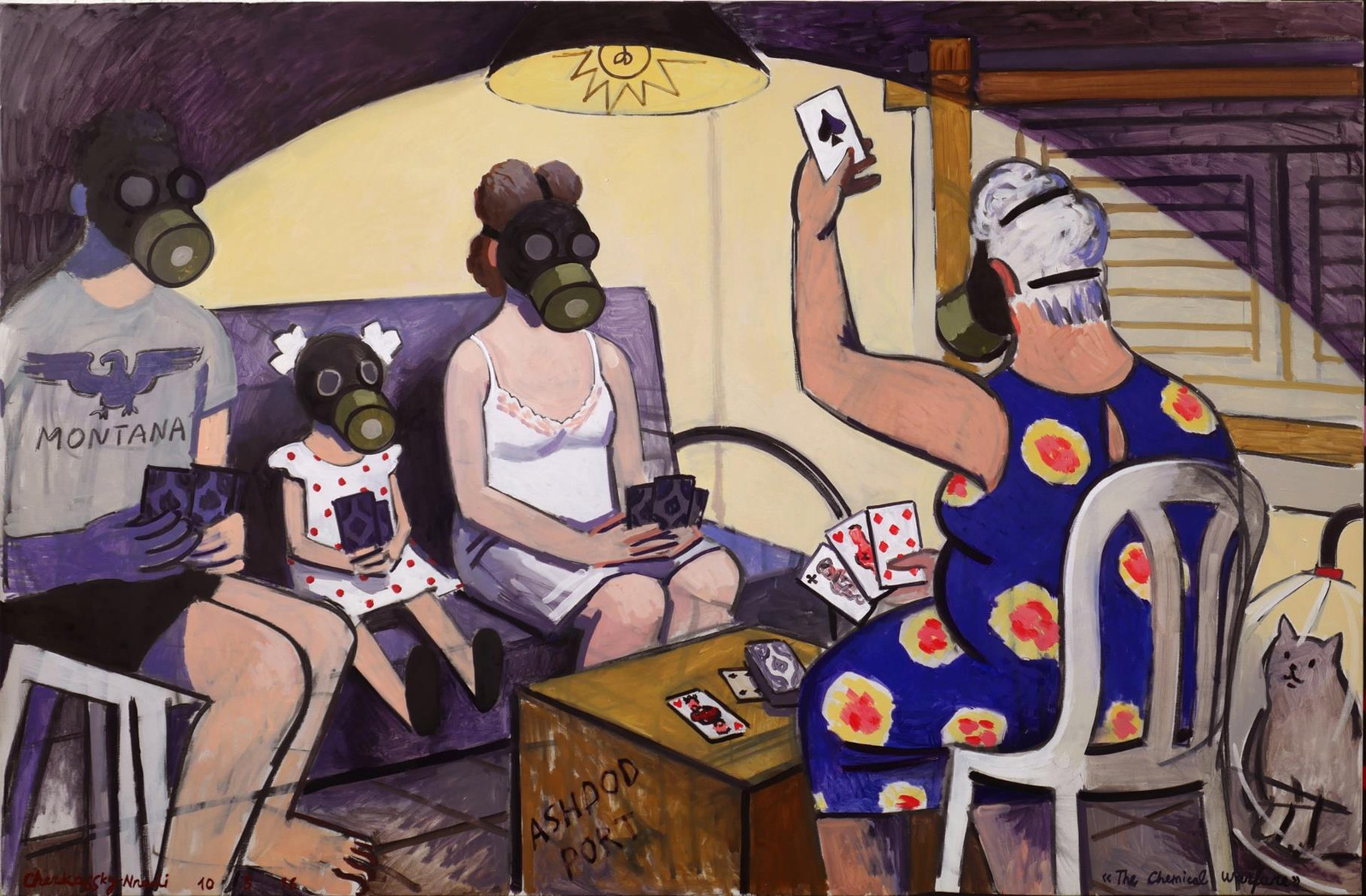 The Israel Museum, Jerusalem will present a series of exhibitions showcasing some of the most acclaimed visual artists, designers, and fashion innovators working in Israel today in its upcoming fall 2017 – spring 2018 season. From solo exhibitions that introduce audiences to new bodies of work by Zoya Cherkassky, Oren Eliav, and Gil Marco Shani, to surveys that provide fresh perspectives on the historic roots of Israeli architecture and fashion design, including Jerusalem in Detail and Fashion Statement: A Century of Fashion in Israel, the upcoming season extends the Museum’s commitment to providing a platform for the country’s breadth of creative expression. Culminating the exhibition lineup is a major retrospective on French artist Christian Boltanski, spanning over three decades of the artist’s career.

“We are thrilled to provide our audiences a rich array of encounters with internationally acclaimed artists, whose deeply poignant works resonate with the Israel Museum’s focus on the universal and Israeli human experience,” said Ayelet Shiloh-Tamir, Acting Director of the Israel Museum. “Encompassing architecture, film, painting, installation, design, and fashion, our upcoming season promises to foster new insights across disciplines and deliver impactful art experiences for all visitors.”

Fall 2017 will also include U.S. premieres of major traveling exhibitions organized by the Israel Museum. The Yale Architecture Gallery in New Haven presents Social Construction: Modern Architecture in British Mandate Palestine, which traces the influence of international modernism on the architectural vernacular that developed in Palestine during the British Mandate period (1917 – 1948). In November at the Jewish Museum in New York, Veiled Meanings: Fashioning Jewish Dress, from the Collection of The Israel Museum, Jerusalem showcases traditional apparel from the 18th to 20th centuries, drawn from the Museum’s world-renowned collection of Jewish dress. Additional information on each exhibition follows below.

Today’s Jerusalem is the product of centuries of human activity, evident in countless signs and symbols left by its builders. This exhibition presents a mosaic of the city, highlighting the ways in which different cultures left an imprint of where they came from and their vision for where they settled. By focusing on ornamental details scattered throughout Jerusalem, the exhibition demonstrates the influence and cross-pollination of aesthetic ideas between ethnic and religious groups that are embedded in the built environment. Jerusalem in Detail is based on the research of architect David Kroyanker, recently published in the book Jerusalem – God is in the Details: Multicultural Design Identities.

The exhibition is curated by Dan Handel, Curator of Architecture and Design.

Focusing on recent paintings by Zoya Cherkassky, Pravda addresses the young artist’s personal experiences and the collective trials of the million-strong Russian immigrant influx to Israel in the early 1990s. In works that are at times provocative and defiant, the artist paints a portrait of this cultural encounter, examining stereotypes held by native Israelis and vice versa. This exhibition marks Cherkassky’s first solo exhibition at the Israel Museum and will be accompanied by a catalogue in Hebrew, English, and Russian, with essays concerning Cherkassky’s art as well as the social impact of the Russian immigration and its effects on Israeli society.

The exhibition is curated by Amitai Mendelsohn, Senior Curator and Head of the David Orgler Department of Israeli Art.

Oren Eliav: How to disappear completely

Oren Eliav, one of Israel’s outstanding young painters, presents his first solo exhibition at the Israel Museum, Jerusalem. Eliav's practice involves a complex relationship with art history. The artist has utilized as his starting point an oil painting that had been displayed in the Museum’s European Art permanent exhibition, The Death of Lucretia, attributed to 15th-century Italian artist Giovanni di Paolo (1403–1483). This painting depicts the moment at which the heroine Lucretia kills herself after relating that she has been raped by the son of Rome’s tyrannical ruler. Whether historical or mythological, this event is a cornerstone in the story of ancient Rome since it was said to have led to the overthrow of tyranny and the establishment of the first Roman Republic.

The Museum’s small-format, highly-detailed painting, which evinces a strange perspective, was the springboard for Eliav to create a sprawling installation of twenty large-scale oil paintings that fill the exhibition space. Each work conveying parts of the scene from a different perspective and in a different painting mode. The visitors may observe the paintings by taking various routes, enabling multiple interpretations and points of view thus becoming themselves witnesses to the elusive moment when image and painting meet, and where Lucretia traverses life towards death.

The exhibition is curated by Aya Miron, Curator of Israeli Art in the David Orgler Department.

The acclaimed Israeli artist Gil Marco Shani transforms the galleries of the Israel Museum into an unexpected new space, triggering disorientation as one walks around the Museum.

Shani’s installation entitled Buses is an ambitious architectural intervention: between two gallery levels, he creates an imaginary indoor parking garage compete with tourist buses. Visitors enter a sort of movie or stage set and confront a transparent door through which they can see what appear to be entire buses even though they are only partial, adapted to the angle of vision. Shani has fabricated them, along with the space’s many details, using a variety of materials and techniques. Effects of sound and temperature complement the optical illusion and deepen the physical experience. The incongruity and uncanny artificiality of the installation produce a feeling of suspense, a sense of being drawn into an obscure anonymous place in which anything might happen.

The exhibition is curated by Aya Miron, Curator of Israeli Art in the David Orgler Department.

This exhibition features travel kits of Jewish ritual objects reexamined and revisited by a wide-ranging group of contemporary designers. Today more than ever, travelers of our global village take with them some kind of kit. This exhibition shows how Jewish ceremonial items can be rethought by designers to better fit the modern world. For this project, the Museum approached about 20 Israeli and international designers and asked them to create a kit of ritual objects, inspired by a Jewish holiday or ritual, contained in a single unit. Participating designers include Assa Ashuach, Yuri Suzuki, Gali Cnaani, Vered Kaminsky, Nati Shamia-Opher, Chanan de Lange, and Nitzan Cohen.

The exhibition is curated by Sharon Weiser-Ferguson, Associate Curator of the Jack, Joseph, and Morton Mandel Wing for Jewish Art and Life.

This major retrospective surveys the work of French multidisciplinary artist Christian Boltanski from the 1970s through the present, demonstrating the artist’s ongoing exploration of the mechanisms of commemoration, from such seminal projects as Ombres, Monuments, and Reliquaires, to recent large-scale pieces and installation works, and several new site-specific projects created specifically for the exhibition. Amongst the earliest supporters and collectors of Boltanski’s work, the Israel Museum presented one of the artist’s first installations, Inventaires (1973), and in 1988–89, as the Museum’s Lindy and Ed Bergman Visiting Artist, he created and exhibited an installation entitled Lessons of Darkness. Featuring works gifted to the Museum by Boltanski from that project, in addition to important loans and site-specific works, the exhibition carries local and historical significance while posing human questions beyond place and time.

The exhibition is curated by Mira Lapidot, Yulla and Jacques Lipchitz Chief Curator of the Fine Arts. The guest curator is Laurence Sigal, Former Director, Le musée d’art et d’histoire du Judaïsme, Paris. The exhibition was made possible with additional support from the Institut Français.

Fashion Statement: A Century of Fashion in Israel

Fashion Statement is a pioneering presentation that surveys a century of fashion in Israel. Through clothing, fashion sketches, and photography, this large scale-exhibition illustrates the broad scope of fashion in Israel from its deep historical roots to contemporary collections, provoking a dialogue about tradition and modernity, myth and reality, and conflicting ideologies. The exhibition highlights the phenomena of such leading industries and fashion houses as Gottex, Maskit, Fini Leitersdorf, and Rojy Ben-Joseph. Celebrating the 70th anniversary of the establishment of Israel, Fashion Statement will follow several recurring patterns, including religious and national symbolism; the inspiration drawn from Israel’s landscapes; and the influence of encounters with a diverse range of traditional dress, both Jewish and Arab.

The exhibition is curated by Noga Eliash-Zalmanovich, Associate Curator, Stella Fischbach Department of Modern Art; Efrat Assaf-Shapira, Associate Curator in the Jack, Joseph, and Morton Mandel Wing for Jewish Art and Life; and Tamara Yovel-Jones, a leading fashion designer and educator in Israel.

The first comprehensive U.S. exhibition drawn from The Israel Museum’s world-renowned collection of Jewish costumes, Veiled Meanings showcases over 100 articles of clothing from the 18th to 20th centuries, presented as complete ensembles or as stand-alone items. This array of apparel from over 20 countries on four continents offers an opportunity to view many facets of Jewish identity and culture through rarely seen garments. The range of textile designs and clothing illuminates the story of how diverse global cultures have thrived, interacted, and inspired each other for centuries. Showcasing color, texture, function, artistry, and craftsmanship, the exhibition also offers an incisive and compelling examination of diversity and migration through the lens of fashion.

Exploring another dimension of European modernist influence on the evolution of Israel’s visual heritage, this exhibition examines the significant influence that early 20th-century European modernism had on the architectural language of Palestine during the period of the British Mandate, which came to be known as White Architecture. Social Construction draws inspiration from the extensive research of Israel Prize-winning architect Ada Karmi-Melamede and architect Dan Price, whose book of the same title explores not only the tectonic and functional aspects of this new architecture, but also the relationships among values, place, and form that defined the qualities of its new language. The exhibition features documentary, analytical, and interpretive drawings that provide an alternative understanding of modern architecture as an evolving language, together with stunning archival photography of some of the iconic architectural projects of the period. The Yale exhibition will include two new sections focused on the transitional periods bookending the ’30s, in which architects hybridized traditional and modern styles.

The exhibition is curated and designed by Oren Sagiv, Chief of Exhibition Design at the Israel Museum, with Eyal Rozen.