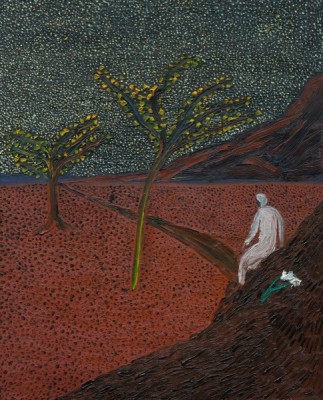 The first museum retrospective and US museum exhibition devoted to the late painter Matthew Wong premieres this fall at the Dallas Museum of Art, the only museum that collected the artist’s work during his lifetime. Featuring approximately 60 paintings created by Wong during his short yet prolific career, Matthew Wong: The Realm of Appearances offers the first formal account of the full scope of Wong’s six-year oeuvre, with a particular focus on his landscape paintings and what they reveal about his process and commitment to dialogue and collaboration. The exhibition is on view from October 16, 2022, through February 5, 2023.

“The DMA’s history with the work of Matthew Wong began in 2017 with our acquisition of his painting The West at the Dallas Art Fair, marking the first time a museum had acquired his work,” said Dr. Agustín Arteaga, the DMA’s Eugene McDermott Director. “Matthew was a rare talent on the rise, and we are fortunate to have the opportunity to further the understanding of his work through this comprehensive presentation, offering audiences a full picture of his exceptional virtuosity and incredibly rich body of work.”

Matthew Wong (1984-2019), a self-taught painter, achieved resounding critical acclaim during his short artistic career, spanning just six years between 2013, when he began painting and drawing in earnest, and his death in 2019. In that time, Wong became known for evocative, unpeopled landscape paintings in a wide range of styles, from vibrant, panoramic vistas portrayed in iridescent patterns of dots and daubs to cool mountain landscapes delineated by long brushstrokes and washes. In their non-specificity and universality of place, Wong’s landscapes reflect his own transnationality, having spent most of his life between Canada and Hong Kong. His expansive worldview manifests also in the range of references found in his work, which readily recalls Post-Impressionists, Fauvists, 17th-century Qing period ink painters, and contemporaries he admired. Wong adeptly synthesized many artists and materials across time, place, and medium to create a visual language uniquely his own.

Matthew Wong: The Realm of Appearances traces the arc of Wong’s practice, bringing together an extensive selection of his oil, ink, watercolor, and gouache paintings to illustrate the depth and range of his work. Curated by Dr. Vivian Li, the DMA’s Lupe Murchison Curator of Contemporary Art, the exhibition is organized in two parts that cover Wong’s artistic production from 2013 to 2019: the first half focuses on the first three years of his painting activities while he was living in Hong Kong and working in his studio in China; the second half hones in on his mature years as an artist, a period of accelerated growth beginning in 2016, when he moved back to Canada. Throughout, The Realm of Appearances sheds light on the dialogues and connections Wong skillfully forged between himself and others, both in his paintings—in which he invoked the work of a mélange of artists, past and present—and in his use of the nascent social media landscape to connect and converse with international art critics, curators, and fellow artists.

The exhibition also features a special conservation study of a few of Wong’s paintings, including The West (2017), which was acquired by the DMA in 2017. Due to the intense speed and rigor of his art making, Wong frequently reused canvases, so several of his early oil on canvas works like The West are executed on top of his earlier paintings. This conservation study, led by DMA Paintings Conservator Laura Eva Hartman, provides invaluable insights into Wong’s process and techniques.

“Matthew Wong was an artist with an intense drive: not only did he teach himself to paint, but he also tirelessly studied artists he admired, assimilating various elements of their work into his own. Yet in looking at his paintings, which are uncanny, captivating, and so stylistically assured, it’s easy to forget this was someone working relentlessly to catch up with himself—and who the world was just beginning to catch onto,” said Vivian Li, The Lupe Murchison Curator of Contemporary Art at the DMA. “I hope that audiences will walk away from this exhibition with a renewed appreciation of the skill, effort, and self-expression that Matthew poured into his work.”

Matthew Wong: The Realm of Appearances will be accompanied by a catalogue distributed by Yale University Press that will feature new scholarship on Wong’s visionary approach to landscapes.