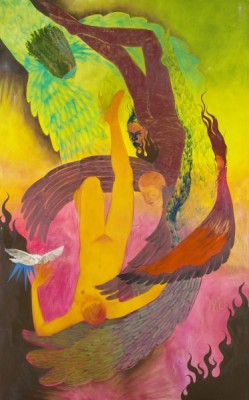 The first solo museum exhibition for painter Naudline Pierre premieres at the Dallas Museum of Art this fall. Naudline Pierre: What Could Be Has Not Yet Appeared debuts five major new paintings alongside existing works by Pierre, including the DMA’s recent acquisition Lest You Fall (2019). On view from September 26, 2021, through May 15, 2022, the exhibition is included in free general admission. It showcases Pierre’s vivid style, recurring cast of otherworldly characters, and use of fantasy to imagine escape and possibility in the elsewhere.

“Providing a platform for the work of rising artists is a critical element of the DMA’s contemporary art exhibitions and programs, reflecting the global voices shaping creative practice today and connecting audiences with some of the most influential artists of our time,” said Dr. Agustín Arteaga, the DMA’s Eugene McDermott Director. “Naudline Pierre is one such artist, and we are honored to have her work not only on our walls but also in our collection, where it will continue to awe and inspire.”

For What Could Be Has Not Yet Appeared, Pierre created a suite of five new works that continue her investigations of hybridity, multiplicity, and transformation through the unfolding narrative of a central protagonist. Across the five canvases, the central figure undergoes a process of change, gaining the powers of flight, wielding flame, and claiming her power in an expression of the escape, pleasure, and care made possible in Pierre’s fantastic worlds. The works are presented alongside other recent works by Pierre—including the DMA’s recent acquisition, Lest You Fall (2019)—that illustrate similar themes and embody the painterly techniques that have become Pierre’s signature: jewel-toned hues; gradients of color; thin, translucent washes; and figures built up from modulated layers and tones.

"With her technical prowess and poetic approach to narrative world-building, Naudline Pierre is a uniquely imaginative and empathetic artist," said Hilde Nelson, the DMA’s Curatorial Assistant for Contemporary Art. "Awash in crimsons, ochres, and violets, her worlds offer a much-needed space for escape and transformation, in which the artist, the protagonist, and we as viewers can be full and expansive."