Thomas P. Campbell, Director and CEO of The Metropolitan Museum of Art, announced today that 57 works by contemporary African American artists from the Southern United States have been donated to the Museum by the Souls Grown Deep Foundation from its William S. Arnett Collection. 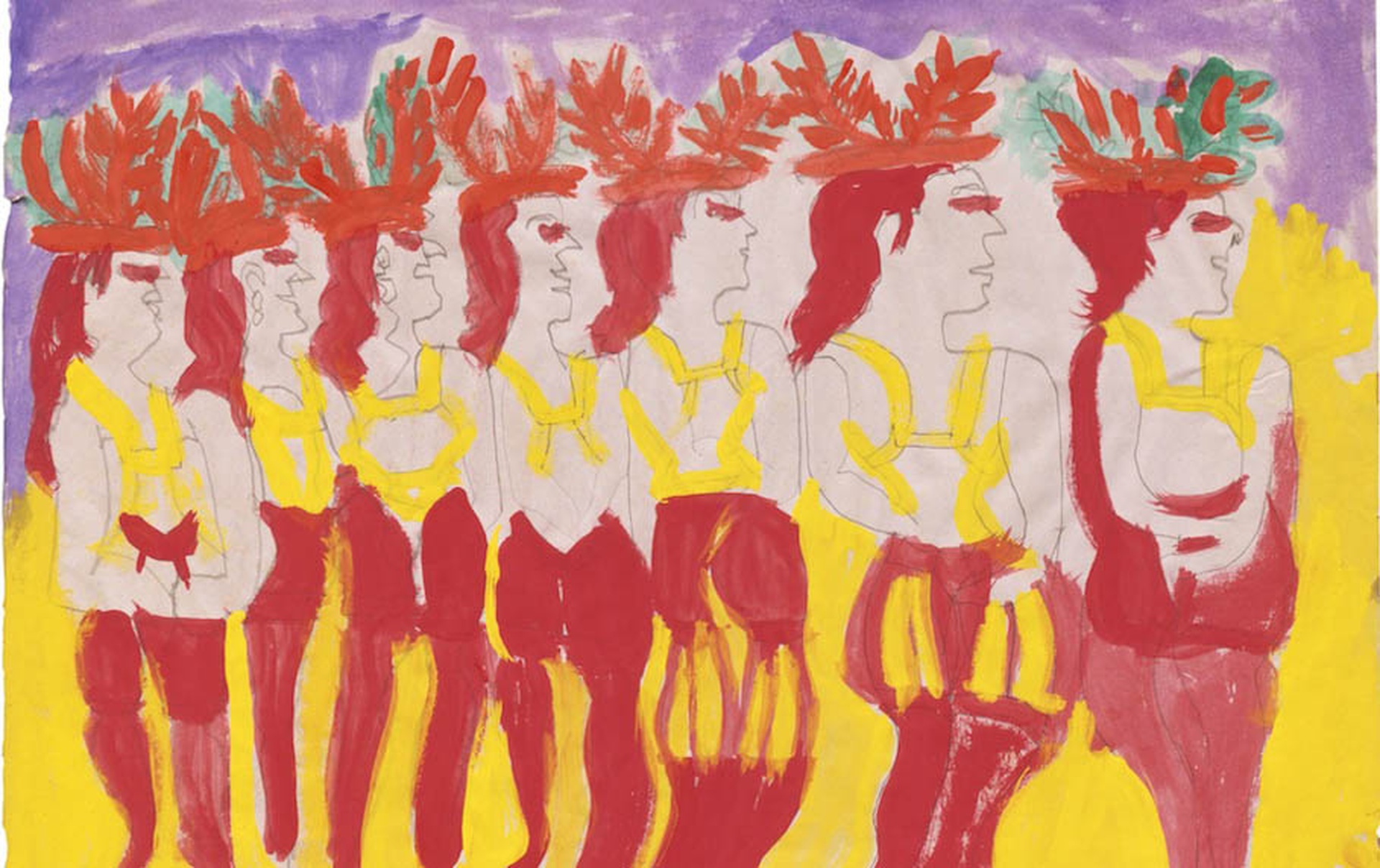 Thomas P. Campbell, Director and CEO of The Metropolitan Museum of Art, announced today that 57 works by contemporary African American artists from the Southern United States have been donated to the Museum by the Souls Grown Deep Foundation from its William S. Arnett Collection.

In addition to paintings, drawings, and mixed media works by acclaimed artists such as Thornton Dial, Lonnie Holley, and Nellie Mae Rowe, the major gift includes 20 important quilts dating from the 1930s to 2003 that were created by women artists based in the area around Gee’s Bend, Alabama.

“We are an institution dedicated to telling the story of art across all times and cultures, and this extraordinary gift is critical to that commitment,” said Mr. Campbell in making the announcement. “It embodies the profoundly deep and textured expression of the African American experience during a complex time in this country’s history and a landmark moment in the evolution of the Met.”

William S. Arnett, Founder and Chairman Emeritus of the Souls Grown Deep Foundation, noted, “This collection documents a little-known tradition that began in the Deep South, likely during the earliest days of slavery. It evolved and appeared in the open when the Civil Rights Movement empowered these African American artists to let their previously hidden visual arts come out of the woods and cemeteries and be seen in the front yards and along the roads. Art lovers and cultural historians everywhere owe a great debt to the Metropolitan, where this historic work will now be seen alongside the current and past art of the world’s great civilizations.”

The artists in the Souls Grown Deep collection represent a unique tradition native to the deep American South that has made a transformative contribution to the history of contemporary art. Often without formal training, and facing economic insecurity and racial discrimination, these artists created profound works from both conventional art media and cast-off materials, giving visual power to a highly developed vernacular tradition that enriches an alternative to conventional narratives of modern art. The Souls Grown Deep Foundation is dedicated to documenting, researching, preserving, interpreting, publishing, and exhibiting this tradition.

Sheena Wagstaff, Leonard A. Lauder Chairman of the Department of Modern and Contemporary Art at the Metropolitan Museum, said, “From Thornton Dial’s magisterial constructions to the emblematic compositions by the Gee’s Bend quilters from the 1930s onwards, this extraordinary group of works contributes immeasurably to the Museum’s representation of works by contemporary American artists and augments on a historic scale its holdings of contemporary art.”

Highlights of the Gift

The gift to the Metropolitan Museum includes 10 works by Thornton Dial, notably Out of the Darkness, the Lord Gave Us Light (2003) and African Athlete (1998); Joe Minter’s Four Hundred Years of Free Labor (2003); Nellie Mae Rowe’s Woman Scolding Her Companion (1981); and the Gee’s Bend quilts, including Lucy T. Pettway’s “Housetop” and “Bricklayer” blocks with bars (ca. 1955).

The 10 works by Thornton Dial comprise an important group of six large-scale, mixed media compositions and four drawings. Born in rural Alabama to a family of sharecroppers, Dial grew up in a racially divided South. He had no formal training in art and worked until middle age in various industrial jobs. From 1952 to 1980 he was a metalworker in the manufacture of railroad cars for Pullman Standard Company in Bessemer, Alabama, and thereafter worked at a number of trades—house painting, highway construction, commercial fishing, and pipe fitting. These various skill-based occupations inform the objects Dial has made with scavenged materials throughout his life and the art he began to make full time in 1987. Dial’s body of work exhibits astonishing formal variety through powerfully expressive, densely composed assemblages of found materials, often executed on a monumental scale. His range of subjects embraces a broad sweep of history, from human rights to natural disasters and current events.

Characteristic of Dial’s style at the time, this abstract composition was made from cloth and carpet remnants attached to a canvas mounted on wood and stiffened with Splash Zone, an epoxy-like compound. This industrial medium enabled the artist to create highly textured, relief-like surfaces with deep cavities and angular forms. Once he stretched the fabrics to form an armature across the surface, Dial used spray and enamel paint to compose areas of brilliant color in blue, purple, and green.

Since early 1990 Dial has made hundreds of drawings, evolving a highly innovative and fluid graphic style coupled with a very personal iconography. The artist made this large pastel and charcoal drawing in honor of the African American track star Florence Griffith Joyner (1959–1998), known as “Flo Jo,” following her untimely death at the age of 38. The figure’s powerfully animated form fill the frame of the sheet as she seems to move toward the viewer. Her agile body twists dramatically in space—her head pivots, her arms are akimbo, and one leg is raised in mid stride. Dial also elected to call out Joyner’s famously glamorous appearance, with her long black hair and red fingernails, the latter a small but brilliant touch of color amidst an otherwise muted palette.

A native of Birmingham, Alabama, Joe Minter grew up in a large family amidst the repressive discrimination and segregation laws of the South. He labored for years in construction and metalworking, making furniture, exercise equipment, and other utilitarian objects. After his employer closed in 1979, Minter, afflicted with various health issues, became increasingly conscious of the ongoing trenchant racism in American culture and began to make art. Since then he has created an immersive environment outside of his home, consisting of a highly orchestrated universe of assemblage sculptures arranged around themes of African ancestry, black American history, biblical themes, and current events. This so-called yard art consists of found materials such as old machinery, used tools, bottles, pipes, or wire, all built into commemorative shrines.

This freestanding sculpture in the Met’s collection is among the works extracted from the large sculptural environment Minter has established on property around or near his home. Working on his own to create large-scale, physically demanding works of art, Minter assembled this object from the vast store he assembled of scavenged materials. The shovels, hoes, pick axes, plows, and chains represent the brutal implements of labor and serve as emblems of black enslavement.

Born in Fayette County, Georgia, at the turn of the 20th century, Nellie Mae Rowe did not begin to make art until she was in her late forties. She initially used her front yard as a studio where she made decorations such as stuffed animals, life-size dolls, and chewing gum sculptures. When neighbors responded negatively to her outdoor installation she turned to drawings. In 1981 Rowe was diagnosed with cancer, and all four works by Rowe included in the gift collection date from that year, the year before her death. This brightly colored drawing features her characteristically fantastic landscape setting, populated by an elaborately garbed female figure and an imaginary cast of hybrid creatures.

The Foundation gift includes a group of 20 Gee’s Bend quilts by a number of distinguished practitioners. These abstract compositions in fabric—ingeniously designed from used clothing such as faded denim or brilliantly colorful cloths—have gradually evolved from their original functional role into dazzling works of art.

Gee’s Bend, a small rural community situated on a bend on the Alabama River, was named for a 19th-century cotton plantation owner, Joseph Gee. The quilting tradition of the area, originated by slave women, is celebrated for its innovative geometric designs. In 1845 Mark Pettway bought the plantation. Many of the Gee’s Bend artists are descendants of his slaves and carry the Pettway name. Lucy Pettway was the fourth of fourteen children and worked in the fields most of her youth, picking cotton, corn, peanuts, sugarcane, peas, and millet. Though she was sporadically educated, she learned to piece and sew at age 12 and made her first quilt the following year. She was subsequently trained by her mother and other skilled quilt makers in Gee’s Bend. This mid-century quilt is based on the “Bricklayer” pattern and on the “Housetop” design—favorites among Gee’s Bend artists—both of which comprise concentric squares of gradually enlarging scale. The work is a testimony to the ways in which the local environment, including its architecture and landscape, played a direct role in Gee’s Bend quilt design: although it is a variation upon a common quilt pattern, the work is also an abstracted map of the Pettway plantation. The quilter used blocks and strips to represent the former slave cabins surrounding the “big house,” the dirt roads and paths, and the river on one side and the fields on the other.

The Met currently has an outstanding collection of approximately 120 American quilts dating from the 18th to the first half of the 20th century. The 20 Gee’s Bend quilts in the gift from the Souls Grown Deep Foundation will supplement the collection in significant ways by representing one of the country’s most important quilt-making traditions.