Featuring Works from the Forthcoming Book Brothers of the Gun: A Memoir of the Syrian War, Accompanied by Audio Narration by Hisham; Opening Reception on May 15 at 7:30 p.m. to Present Crabapple in Conversation with Iraqi Poet and Novelist Sinan Antoon 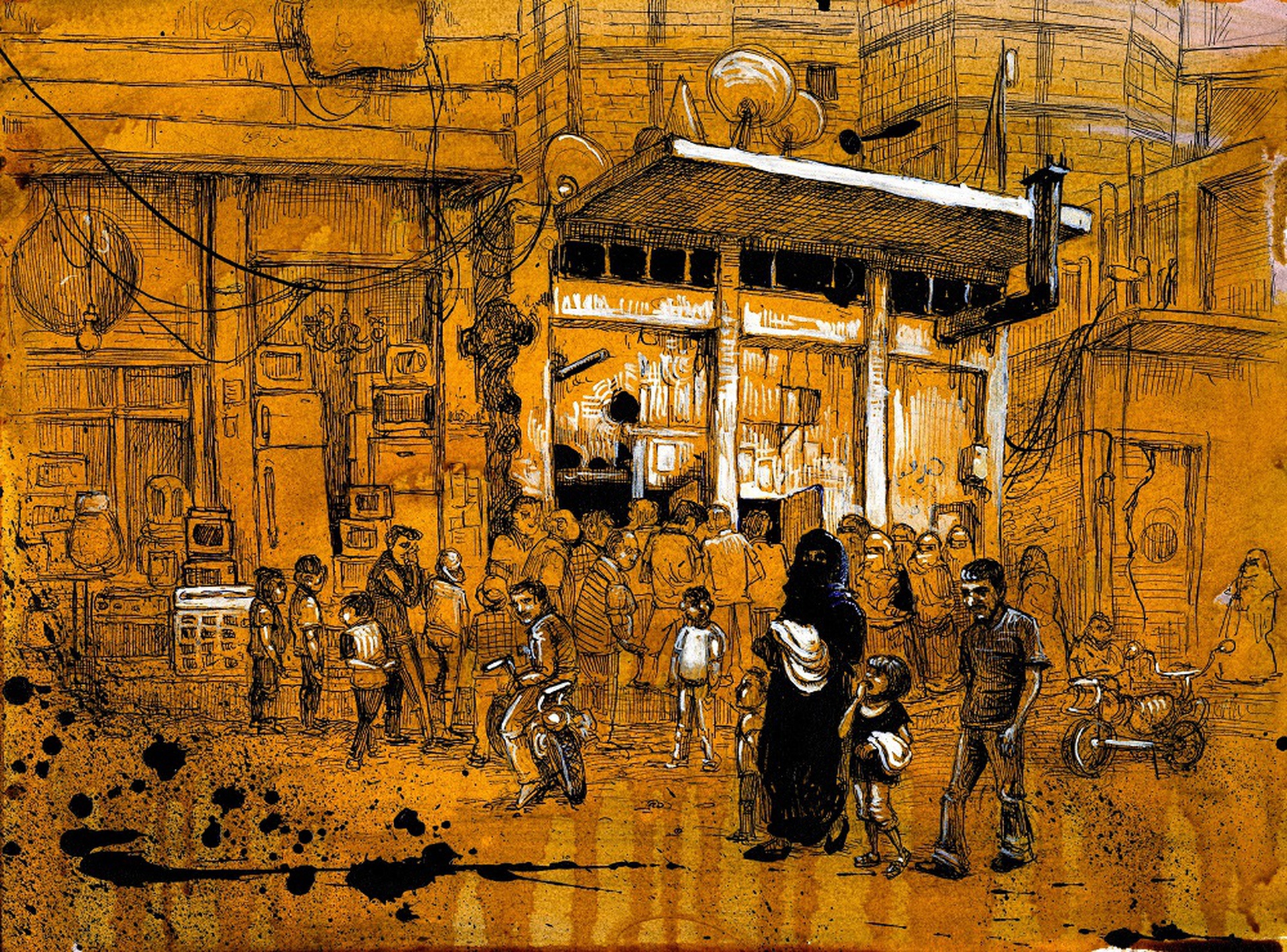 Featuring Works from the Forthcoming Book Brothers of the Gun: A Memoir of the Syrian War, Accompanied by Audio Narration by Hisham; Opening Reception on May 15 at 7:30 p.m. to Present Crabapple in Conversation with Iraqi Poet and Novelist Sinan Antoon

Next month, Brooklyn Public Library (BPL), one of the largest and most diverse libraries in the country, will premiere Molly Crabapple & Marwan Hisham: Syria In Ink, an exhibition of original works from the forthcoming graphic book Brothers of the Gun: A Memoir of the Syrian War (One World, 2018), illustrated by BPL’s 2018 Katowitz Radin Artist-in-Residence Molly Crabapple and co-authored by Syrian journalist Marwan Hisham. More than 50 of Crabapple’s pen-and-ink works will be installed throughout BPL Central Library’s lobby and accompanied by an audio guide in which Hisham, now exiled in Turkey, reflects on his experience living through the Syrian conflict, the country’s partial occupation by ISIS, and the artwork it inspired.

Through Crabapple’s vivid images and Hisham’s words, Syria in Ink (on view May 15 through June 30) presents the complexity of the Syrian conflict and the besieged consciousness of one young Syrian man finding his voice as a writer, depicting the country from before the Arab Spring to the current state of civil war, ethnic conflict, and mass displacement. The exhibition will kick off on May 15 with an opening reception at 7:30 p.m. featuring Molly Crabapple in conversation with Iraqi poet, translator, and novelist Sinan Antoon. Hisham will also share a video message at the reception to mark the beginning of his week-long takeover of the @BPLPresents Instagram, documenting daily life as part of the Syrian refugee community in Istanbul.

Crabapple drew inspiration for her illustrations, created between 2014–2017, from photos she and Hisham shot in Syria, amateur images and videos posted on social media by those directly impacted by the conflict, Google Earth, and above all, from Hisham’s memories of joining the first protests of the Arab Spring to the day he was forced to flee the country. He watched from the rooftops as regime warplanes bombed soldiers; as revolutionary activist groups, spray-painted messages of hope across Raqqa; as his friends were killed or joined Islamist fighters. He saw his country destroyed in front of him, and eventually joined the stream of refugees risking their lives to escape. Crabapple drew from hundreds of sources, using Hisham’s instructions, diagrams, and visual research to convey the war through the lens of his experiences.

“Molly Crabapple and Marwan Hisham’s collaboration on Syria in Ink represents BPL’s commitment to pursing projects across the boundaries of genre,” said BPL’s Vice President of Arts & Culture László Jakab Orsos. “Bringing together works of visual art with text and audio recordings, Syria in Ink creates a unified, immersive experience that allows audiences to explore the complexity of the conflict.”

Molly Crabapple began her journalistic career sketching the frontlines of Occupy Wall Street before covering, with words and art, Lebanese snipers, labor camps in Abu Dhabi, Guantanamo Bay, Syrian rebels, resistance amongst solitary confinement prisoners, the refugee crisis in Greece, and, most recently, the ravages of hurricane Maria in Puerto Rico. As an award-winning animator, she has pioneered a new genre of live-illustrated explainer journalism. Her memoir, Drawing Blood, was published in 2015 and her writing has appeared in The New York Times, The New York Review of Books, The Paris Review, Vanity Fair, The Guardian, and VICE. She has been the recipient of a Yale Poynter Fellowship, a Front-Page Award, and a Gold Rush Award and was shortlisted for the Print Journalism Award by the Frontline Club. Her art is in the permanent collections of the Museum of Modern Art, the Rubin Museum of Art, and the New York Historical Society.

“In creating the art displayed in Syria in Ink, I was inspired by Goya’s Disasters of War. We now live in the age of infinite photos, and Syria is perhaps the most widely documented war in history. But oppressors, whether they are governments or not, seldom allow cameras into the spaces where they inflict their oppression,” remarked Crabapple. “Thankfully, art is a slippery thing. It can evade censorship, make history visible, invest the hideous with beauty and the prosaic with force. It can reveal that which power would otherwise be able to hide. I seek to accomplish with my art what photos cannot.”

Marwan Hisham is a Syrian freelance journalist who started his career in 2014 by courageously tweeting out news from Syria, at the time under siege by ISIS, the Russians, and the Americans all at once. Covering the conflicts in Syria, Iraq, and Turkey, Hisham’s writing has been featured in Vanity Fair, The New York Times, Foreign Policy, The Intercept, and elsewhere.

Of his collaboration with Crabapple developing Syria in Ink, Hisham writes, “The most exciting part of this experience was leaping back into my distant memories and reviving them. Most of the illustrations had no available reference so they required lots of abstract descriptions that Molly masterfully converted into images. I hope Molly and I, through this exhibition’s panoramic scenes, succeeded in providing the viewer a coherent timeline of the revolution and war that’s both informative and impressionistic.”

Sinan Antoon was born and raised in Baghdad and emigrated to the United States after the 1991 Gulf War. He has published two collections of poetry and four novels, translated works by Arabic poets including Mahmoud Darwish and Saadi Youssef, and is co-founder and co-editor of Jadaliyya.

Syria in Ink is part of Brooklyn Public Library’s spring season of cultural programming, bringing together the world’s most illustrious writers, critics, and artists with the Brooklyn and Greater New York communities to discover new perspectives, draw creative inspiration, and participate in today’s most urgent conversations. Additional recent visual art programs include The Review Panel, a bi-annual gathering of leading art critics to discuss the season’s exhibitions around the city; Visual Speaking, a series devoted to conversations about photography curated by Terrence Jennings; and Vision & Justice, a lecture series led by Harvard scholar Sarah Lewis on the role of visual literacy in American civic engagement and the invention of race.

For more information and to reserve tickets, please visit: https://www.bklynlibrary.org/calendar/molly-crabapple-author-central-library-dweck-20180515