The 16th edition of Frieze London takes place from 5–7 October, with two Preview Days on Wednesday 3 October and Thursday 4 October

A new themed section, Social Work, will be selected by a panel of leading women art historians and critics 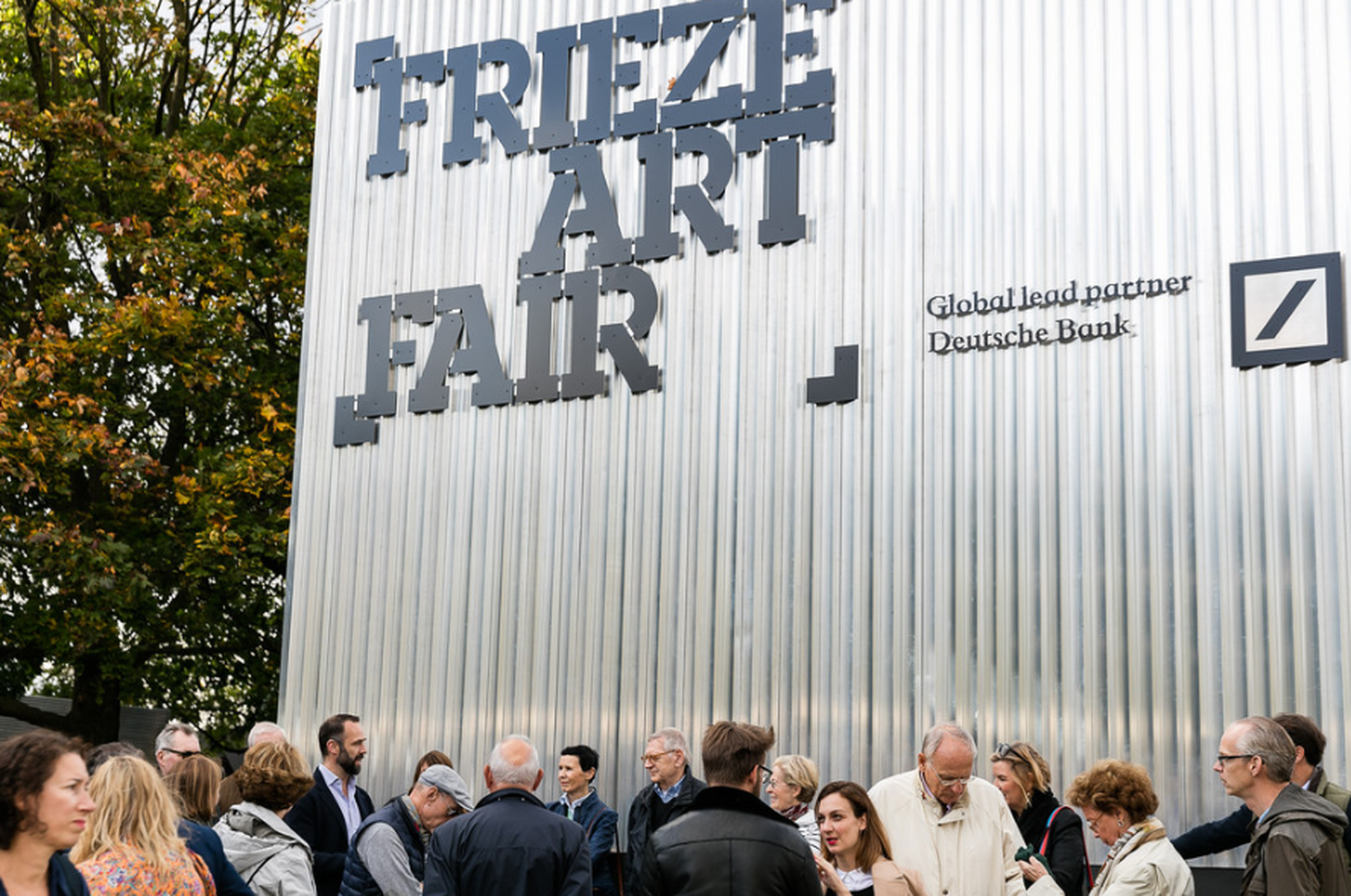 The 16th edition of Frieze London takes place from 5–7 October, with two Preview Days on Wednesday 3 October and Thursday 4 October

A new themed section, Social Work, will be selected by a panel of leading women art historians and critics

Frieze London 2018 will showcase the best of international contemporary art, with a discerning selection of around 160 galleries presenting their most forward-thinking artists and imaginative presentations. Opening for the first time with a two-day Preview, Frieze London coincides with Frieze Sculpture and Frieze Masters in The Regent’s Park, together forming the most significant week in London’s cultural calendar. Global lead partner Deutsche Bank supports Frieze London for the 15th consecutive year, continuing a shared commitment to discovery and artistic excellence.

New collaborations with international curators, institutions and galleries will respond to contemporary issues – from the lack of visibility of women in the marketplace to hidden systems of communication and control – and create an exceptional environment for creativity and discovery.

Following the success of Sex Work: Radical Art & Feminist Politics at Frieze London 2017, which focussed on artists from the 1960s and ‘70s, the fair will this year will feature Social Work, celebrating artists who challenged the male dominated art market of the 1980s. A panel of 11 women art historians and critics from UK institutions, including Iwona Blazwick, Katrina Brown, Louisa Buck, Amira Gad, Jennifer Higgie, Melanie Keen, Polly Staple, Sally Tallant, Fatos Üstek and Lydia Yee, will select a group of artists who challenged the status quo, embracing an activist approach in their art making and confronting social and cultural norms. The section will include both well-known and overlooked female artists, who address questions of identity, labour and visibility in their work. The participating artists and galleries will be announced in the coming months.

Continuing Frieze’s enduring relationship with collecting institutions across the UK, Frieze London again partners with two acquisition funds for national and regional public collections. The Frieze Tate Fund, supported by Endeavor, returns for its 16th year; alongside the third edition of the Contemporary Art Society’s Collections Fund at Frieze, this year supporting The Box (Plymouth). Allied Editions also returns to the fair, launching exclusive artist editions at the fair to raise funds for non-profit galleries across London and guest regional partner, The Hepworth Wakefield.

The World’s Most Significant Galleries

Victoria Siddall (Director, Frieze) said: ‘Following major museum sales and record collector attendance last year, I am really looking forward to the 16th edition of Frieze London. A fair is made by its galleries and the list this year is stronger than ever – from galleries who have been with the fair since its launch in 2003, to today’s most exciting new programmes in London and across the world. I’m also thrilled to welcome great international curators across our sections and talks who will ensure an exceptional quality of programming at the fair and will explore its wider cultural significance for today’s audiences. The fair continues to be a key destination for collecting institutions and our collaborations with Tate and the Contemporary Art Society enable the entry of works by today’s most forward-thinking artists into national and regional public collections.’

Jo Stella-Sawicka, (Artistic Director, Frieze) said: ‘Frieze London programming evolves this year, shaped by new curators and urgent political realities. 100 years since women gained the vote in the UK, Frieze London will use its international platform to respond to the fact that women artists are still under-represented in the art world and especially the market. It’s been an honour to collaborate with 11 of the country’s leading minds on the subject, to shape this year’s themed section, Social Work. It’s also very exciting to welcome Diana Campbell Betancourt’s new vision for the Frieze Artist Award, Live and Film. Following her celebrated programming in Dhaka and Manila, she will open up new possibilities for experimental performance with galleries, and commission new work which is exciting, thought-provoking and important.’

Galleries throughout the fair will showcase their most exciting artists, including debut exhibitions and exceptionally ambitious new projects. Highlights in the main section include:

Further gallery presentation highlights will be announced in the coming months.

Bringing together 33 galleries representing young art scenes from Cape Town to Los Angeles, Focus features galleries aged 12 years or younger. Advised for the first time by Andrew Bonacina (Chief Curator at The Hepworth Wakefield) in collaboration with Laura McLean-Ferris (Curator at Swiss Institute, New York), highlights include, among many others:

Frieze Projects encompasses the activity beyond the booth at the fair and in 2018 includes Live, the Frieze Artist Award and Frieze Film. Overseen this year, for the first time, by Diana Campbell Betancourt, the programming evolves to open up further collaborations with galleries and institutions, creating new space for experimental practice.

Campbell Betancourt, said, ‘It is an honour to join the Frieze team. I know that Frieze London is a place that I never leave without discovering an emerging artist whom I want to work with. I appreciate how Frieze opens up experimental possibilities for artists and artworks that might not usually show in an established fair context to participate in their rich programming, speaking to how Frieze wants to be a part of developing contemporary art discourse and opportunities for artists, rather than simply serving as a marketplace. In this regard, I am especially excited about working on the Frieze Artist Award.’

Curated by Diana Campbell Betancourt, the 2018 Frieze Film programme will question systems that control and influence the dissemination of information. New commissions by the Otolith Group, Paul Pfeiffer and Lucy Raven will premiere at the fair and be broadcast on national television. Frieze Film forms part of Frieze Projects and is supported by Channel 4’s Random Acts.

The Frieze Artist Award returns, curated by Diana Campbell Betancourt. A major opportunity for an emerging artist to present a new artwork at the fair, the Frieze Artist Award follows in a rich tradition of artist award commissions at Frieze since 2006, providing early support to artists including Jordan Wolfson, Simon Fujiwara, Rachel Rose and Kiluanji Kia Henda.

For the first time, the Artist Award will focus on performance-based work and the winning artist will benefit from a residency at Delfina Foundation, London. The new partnership with Delfina Foundation provides the artist in residence with an additional opportunity to develop their practice through a greater access to learning, resources and networks.

Aaron Cezar (Director, Delfina Foundation, London) said, ‘Delfina Foundation has had a long-standing commitment to nurturing performance, one of the most popular yet under-supported mediums. We are excited to join forces on the Frieze Artist Award to create a career-defining opportunity for an artist to produce a new performance in one of the most visible platforms in the world.’

Fair visitors will encounter the Live programme throughout the fair, a platform for interactive installations and performances, presented in collaboration with galleries. Live is curated by Diana Campbell Betancourt, who said: ‘“Control ~” (which when spoken aloud is pronounced “control tilde”) is a command on your computer keyboard that will unlock all of the formulas in an Excel spreadsheet and make them visible to you – thus revealing the drivers behind the numbers displayed in front of you. In today’s world, there are many hidden drivers shaping our perceptions, designed to influence our values and beliefs. For example, a seemingly transparent and neutral idea such as ‘democracy’ is impacted via social media in many ways including secret algorithms that control what individuals see, targeted advertising and data harvesting. These hidden drivers exist outside of social media platforms with much wider implications for society as a whole. Live will present works of art that draw attention to unexpected connections and hidden formulas which influence and impact the way we perceive and experience the world.’ Participating artists and galleries for Live 2018 will be announced in the coming months.

Frieze Talks will be co-programmed for the first time by Lydia Yee (Chief Curator, Whitechapel Gallery) and Matthew McLean (Senior Editor, Frieze Studios). Taking place daily in the fair’s auditorium, Frieze Talks will explore the role played by autobiography in art and society, at a time when personal experience is under renewed scrutiny. The full programme will be announced in the coming months.

Established in 2003 as the first acquisition fund connected to an art fair, the 2018 Frieze Tate Fund will provide £150,000 for Tate to acquire works of art at Frieze London this October. Tate has acquired more than 100 works at Frieze London. Supported by Endeavor, the artworks acquired by the fund will be announced during the fair.

The Contemporary Art Society Collections Fund at Frieze returns for a third year, following the acquisition of a significant installation by Dineo Seshee Bopape for the Towner Art Gallery (Eastbourne) in 2017, and major works by John Akomfrah and Kader Attia for the Middlesbrough Institute of Modern Art (MIMA) in 2016. This year’s chosen beneficiary is The Box: Plymouth City Museum and Art Gallery’s new landmark heritage and cultural centre, set to open in spring 2020 that brings together six of the city’s collections into one venue. The Contemporary Art Society’s acquisition for The Box (Plymouth) will be announced on Wednesday 3 October.

Frieze Sculpture will return to The Regent’s Park for three months this summer, featuring works by 25 contemporary and modern artists presented by worldleading galleries. Selected and placed by Clare Lilley (Director of Programme, Yorkshire Sculpture Park), Frieze Sculpture will create an exceptional cultural attraction at the heart of the city, for Londoners and international visitors alike.

For the first time, Mtec, logistics partner for Frieze Sculpture, will cover the cost of installation for two emerging galleries, enabling them to participate in the display; and Frieze will also launch a new audio tour app in collaboration with mobile platform ARTimbarc. Also new for 2018, a Frieze Sculpture Family Trail will be produced and activated with family days in the park on 7 July, 28 July, 4 August and 25 August, led by the Royal Society of Sculptors.

Returning for a third year, the Reading Room offers visitors the opportunity to meet writers, editors and artists in book signings and events, hosted daily by the world’s leading arts and lifestyle publications.

Bespoke Guided tours of the fair will include general and group tours as well as Frieze Bespoke – an exclusive opportunity for those interested in collecting art to explore the fair accompanied by an independent art specialist.

Coinciding with Frieze Masters, as well as Frieze Sculpture, the two fairs form the heart of Frieze Week – an international cultural event in early October, which includes special programmes mounted by galleries and museums across London.

Taking place on 2 October 2018 at the Royal Institution (London), the third edition of the Frieze Art & Architecture Conference looks at recent projects from architects around the world to consider how the form and function of cultural institutions are evolving, and presents long-term works by artists who are reassessing how and where we live. Speakers will include: Shigeru Ban, Jamie Fobert, Richard Rogers, Christopher Kulendran Thomas, Ellen van Loon, Kulapat Yantrasast and Andrea Zittel with more to be announced soon.

Frieze Week magazine returns offering a companion guide to the wealth of art and activity taking place at the fair and across the city during Frieze London and Masters.