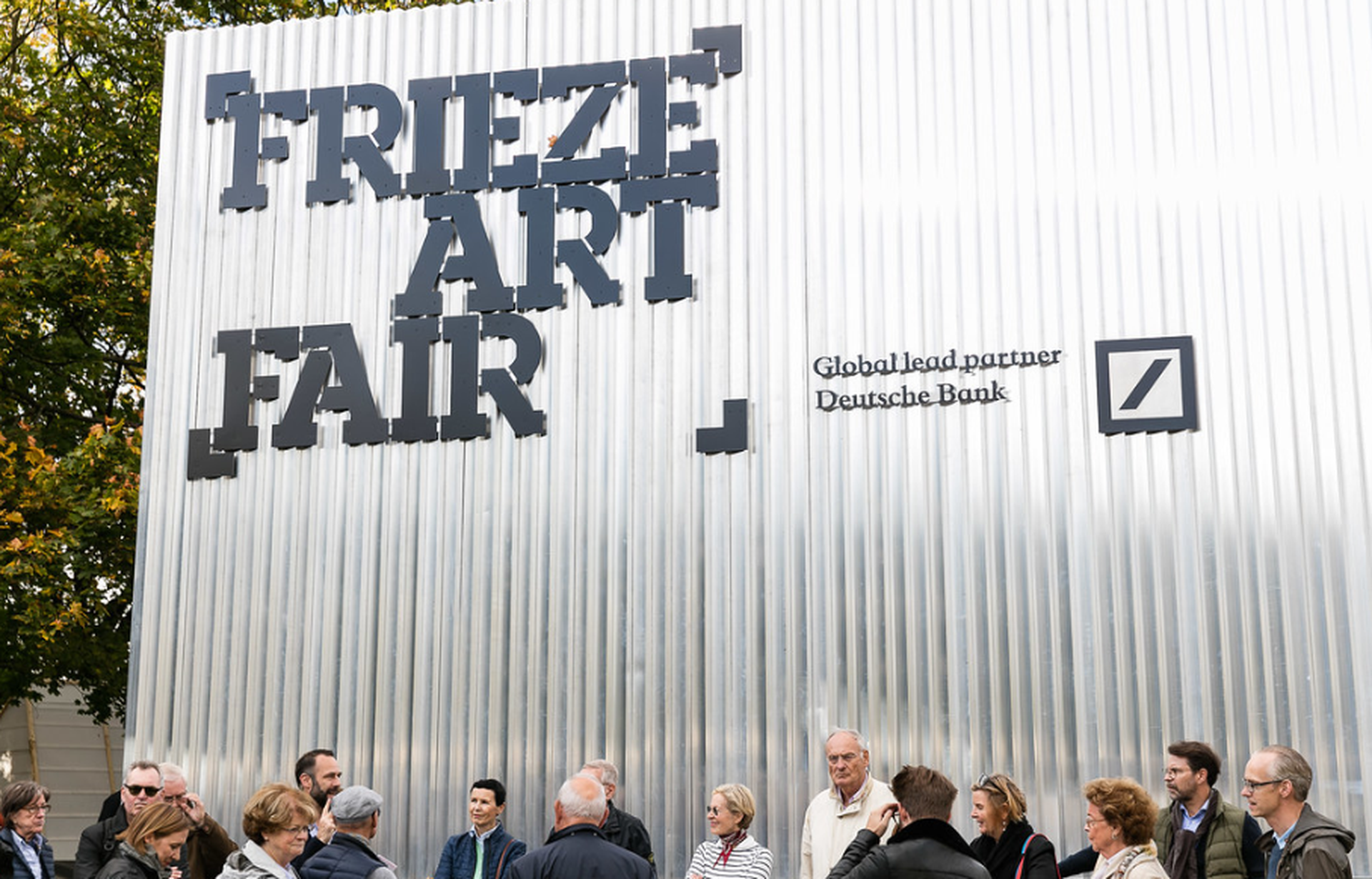 Frieze London 2019 will bring together more than 160 galleries from 36 countries, representing the fair’s most international edition since its launch. Introducing new curators and sections showcasing performance, emerging artists and the contemporary significance of complex art genealogies and colonial legacies, Frieze London will create an exceptional moment for cultural conversations on a global level. Opening 3 to 6 October 2019, Frieze London coincides with Frieze Sculpture and Frieze Masters in The Regent’s Park, together forming the most significant week in London’s cultural calendar. Global lead partner Deutsche Bank supports Frieze London for the 16th consecutive year, continuing a shared commitment to discovery and artistic excellence.

Continuing Frieze’s enduring relationship with collecting institutions across the UK, Frieze London again partners with two acquisition funds for national and regional public collections. The Frieze Tate Fund, supported by Endeavor, returns for its 17th year; alongside the fourth edition of the Contemporary Art Society’s Collections Fund at Frieze, this year acquiring works on themes of protest, activism and rebellion for the Nottingham Castle Museum. Following its praised debut in 2018, the Camden Arts Centre Emerging Artist Prize at Frieze also returns, which will once again award a solo exhibition for an outstanding artist within the Focus section. The 2018 winner, Wong Ping (Edouard Malingue Gallery) receives his exhibition prize this summer at Camden Arts Centre.

Victoria Siddall said: ‘This year’s editions of Frieze London and Frieze Masters embody the exceptional international spirit of London, a city that is a meeting point for art, ideas and people from all over the world. We will welcome the most significant galleries from around the globe, across both fairs, some of whom are joining us for the first time. They represent art and artists from around the globe, from the Asian influence on Collections at Frieze Masters, to new galleries joining Frieze London from Brazil, Lebanon, Estonia and Taiwan, as well as leading programmes from the USA and Europe. The two fairs and Frieze Sculpture, along with exhibitions opening during Frieze Week including Kara Walker in the Turbine Hall of Tate Modern and Elizabeth Peyton at the National Portrait Gallery, make Frieze in London a vital and truly global cultural moment in the city.’

Building on Frieze’s support for galleries at all stages of their development, previous Focus participants, including 47 Canal, Carlos/Ishikawa with Antenna Space, Galerie Emanuel Layr and Koppe Astner, graduate into the main section for the 2019 edition.

Cosmin Costinas, writer, critic and Executive Director/Curator of Para Site (Hong Kong), has been invited to curate the new themed section at Frieze London 2019. Entitled Woven, the gallery-led section brings together eight artists whose practice is informed by rich and complex art genealogies, revealing the many ways in which contemporary practice is entangled with a plurality of traditions. The international artists featured in Woven are of different generations – from Brazil, the Philippines, China, India and Madagascar – and are working with vernacular, indigenous, or underground traditions, employing textiles and weaving, either in a direct way or as an expanded exploration of this fertile medium.

Costinas said: ‘Together these eight solo presentations will make visible the histories and continuous legacies of the colonial catastrophe, from the economies around textiles to current forms of exploitation and political complicity, as well as point to the various languages available to artistic practice in this critical effort.’

The participating artists and galleries in Woven are:

FOCUS: EMERGING ART FROM ACROSS THE WORLD

Focus, the fair’s section for galleries aged 16 years or younger, continues to evolve as a platform for younger voices in the art community. For the first time, the section will be advised by an international committee of gallery peers comprising Stefan Benchoam (Proyectos Ultravioleta, Guatemala City), Edouard Malingue (Edouard Malingue, Hong Kong), and Angelina Volk (Emalin, London).

Featuring 33 galleries from 19 countries, highlights for the 2019 Focus section include:

The Live programme, including the 2019 theme, participating galleries and artists, as well as gallery presentation highlights across the main section, will be announced in the coming months.

The Frieze Artist Award returns for 2019 curated by Diana Campbell Betancourt. The 2018 Frieze Artist Award at Frieze London was given to Alex Baczynski-Jenkins, whose performance commission is currently featuring in the 58th Venice Biennale. The winner of the 2019 Award will be announced soon.

Frieze Talks will be co-programmed for by Lydia Yee (Chief Curator, Whitechapel Gallery) and Matthew McLean (Senior Editor, Frieze Studios) for the second consecutive year. 100 years after the founding of the Bauhaus, Frieze Talks 2019 will take inspiration from the school’s pioneering approach to interdisciplinarity and its questioning of art’s relationship to a wider social world. The full programme of speakers will be announced in September.

EATING AND DRINKING AT FRIEZE LONDON

Opening 3 July to 6 October, Frieze Sculpture in London is selected by Clare Lilley (Director of Programme at Yorkshire Sculpture Park) and presented in collaboration with leading galleries from around the world. Creating a major public art display at the heart of London, Frieze Sculpture will bring together more than 20 international artists to present new and modern artworks in monumental scale, all placed around the English Gardens of The Regent’s Park. Building on Frieze’s commitment to emerging artists, logistics partner Mtec will again support the installation of two works presented by young London galleries.

Frieze Masters and Frieze London catalyze a festival of culture across the city, with the London’s world-class museums hosting special events and major exhibitions. Highlights of Frieze Week 2019 include: