Frieze Masters 2016 returned to Gloucester Green in London’s The Regent’s Park from 6–9 October for the fifth edition, with another year of widespread acclaim and strong sales across the broad range of works presented. 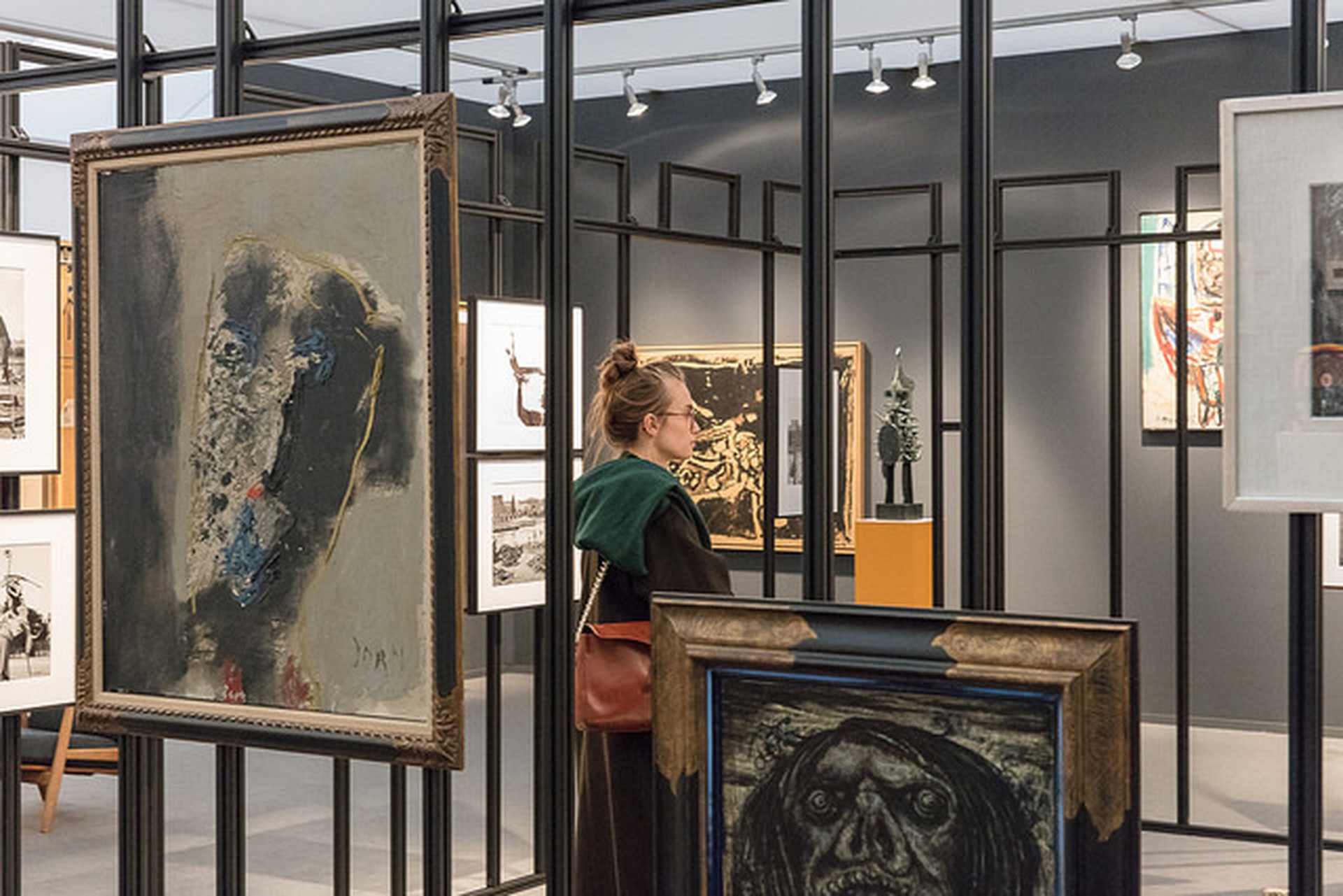 Frieze Masters 2016 returned to Gloucester Green in London’s The Regent’s Park from 6–9 October for the fifth edition, with another year of widespread acclaim and strong sales across the broad range of works presented.

Exhibitors commented on the lively atmosphere and unique crossover in au- diences resulting in significant private and institutional sales throughout the week. Growing global awareness of Frieze Masters’s unrivalled quality and range of artwork attracted unprecedented museum group attendance, which grew by almost 20% this year.

Building on Frieze Masters’s role as a vibrant platform for curatorial discov- ery and conversation, this year’s new Art Fund Curators Programme brought together leading international experts and UK regional museum curators to discuss and share areas of research, including participants from Yale, The Met and MFA Houston. Nicholas Cullinan, Director of the National Por- trait Gallery, participated and commented ‘Frieze Masters this year reaf- firmed its position as a catalyst not only to facilitate a dialogue between the historic and contemporary, but also between curators, collectors and gal- lerists. A thought-provoking series of talks and juxtapositions of ancient and modern made it possible for both new discoveries to be made and links to be forged.’

Victoria Siddall, Director, Frieze Fairs, commented: ‘This was the fifth edition of Frieze Masters and it felt truly established, with galleries bring- ing masterpieces to the fair spanning all categories, from ancient sculpture to modern painting. I was delighted to see the reception these received from leading curators and collectors from all over the world and the sales that were made, some at a very high level, both to institutions and private collectors. The curated sections - Spotlight and Collections - were highlights of the fair, as was the Talks programme that featured great artists and curators in conver- sation. I was delighted by the quality and breadth of work in the fair and the enthusiastic response to it.’

Fabrizio Campelli, Head of Deutsche Bank Wealth Management, said: ‘We are delighted to continue our support of Frieze Masters and the great work they do in bringing together artists to connect and inspire our people, our clients and the communities in which we do business together. Supporting art and art education is a long-standing belief of ours which we share passion- ately with our clients.’

Iwan Wirth, President and co-founder of Hauser & Wirth, commented: ‘We have had a thoroughly enjoyable week at Frieze! The fair’s vivacious spirit and forward-looking attitude encourages us to be more playful with our presentations and to offer something a bit different for collectors – this year with our eccentric ‘L’atelier d’artistes’ and Luis Laplace’s beautifully designed booth at Masters. This approach paid off in spades; we placed numerous important works and experienced consistent sales throughout the week, several in excess of a million dollars, by artists including Louise Bourgeois, Cy Twombly, Alexander Calder, Francis Picabia, Dieter Roth, Takesada Matsu- tani and Fausto Melotti, in addition to having built relationships with collec- tors new to the gallery.’

Marc Glimcher, Pace Gallery, commented: ‘It’s was a great Frieze, as always and probably the best Frieze Masters yet… Frieze Masters always draws a wonderful international crowd who come to look, this year they also came to buy.’

Daniella Luxembourg of Luxembourg & Dayan said: ‘At Masters we have seen a quality of collectors that we have not seen before, an even better and bigger number of galleries is evident. It’s really established London as the cen- tre of the art world in Europe. We have sold and a few things are on hold. The Giacometti goes to an American collector, the Picasso goes to a European collector, and another piece has sold to an English collector.’

Anthony Meier, Owner of Anthony Meier Fine Arts San Francisco, com- mented: ‘Now completing my fifth year of exhibiting at Frieze Masters, the quality of the attendees, the flawless organizational skills of the Frieze team, and the transactional opportunities keep getting better and better.’

Jean-Luc Baroni, from Paris remarked: ‘The thing that characterises Frieze Masters is its quality, and we feel that the people who have been here have really appreciated this. We have had compliments from scholars about the excellent condition of the works presented. The fair has had a strong attend- ance and we have made good sales.’

Johnny Van Haeften, Managing Director of Johnny Van Haeften Ltd., com- mented: ‘We love this Fair. During the Preview day all the people we wanted to see came to the fair. On the weekend, we sold a painting by Jacob van Ruisdael to an American contemporary art collector who is stepping into the Old Master world for the first time.’

Alois M. Wienerroither, Co-Founder of Wienerroither & Kohlbacher, Vienna, commented: ‘We have seen a younger crowd at the fair this year. The opening day was amazing – the clientele was high profile and very interest- ing. It is a fantastic fair with a mix of very good works. We have had a suc- cessful fair selling works by Egon Schiele, Günter Brus, Oskar Kokoschka and Arnulf Rainer.’

Bruce Silverstein, Founder of Bruce Silverstein Gallery, commented: ‘This has been the best edition of Frieze since its inception. The quality and vari- ety of work is extraordinary, and we are thrilled to be on our fifth year. Our sales have been strong, and the quality of collectors and curators has been exceptional.’

Rupert Wace Ancient Art, commented: ‘Frieze Masters is the most exciting fair, and the only fair that we participate in that attracts a different audience. There are people who come here that don’t come to any other fair that we do, and there have definitely been more American and Continental visitors this year. People come here wanting to learn.’

Marlborough Fine Art, commented: ‘On the Preview day we made some important sales totalling over £1 million, including one to a UK National Museum.’

Nick and Alexander Acquavella commented, ‘We are very happy with the fair and on the second day we confirmed sales of two important works, one by an American artist. There are always good people at this fair!’

Ariadne Galleries said: ‘The fair is going exceptionally well and it has been commercially successful. Frieze is a fair that works particularly well for us. It has a great vibrancy and dynamic, and the crossover of works attract an interesting clientele. There is a very positive atmosphere and the people are very tuned into the exhibits.’

Daniel Crouch commented: ‘The fair is going from strength to strength. By the end of the opening night we had two pages of new contacts and several sales all to new clients. The fair is embedding itself in the fair season nicely.’

Sales and interest in the Spotlight section of the fair, dedicated to solo presen- tations of artists working throughout the 20th century, were similarly strong Michael Rosenfeld, New York, commented: ‘This is my gallery’s first time exhibiting at Frieze Masters and it’s been a terrific experience. The vetting process that ensures the high quality of the fair makes it very special. I’m presenting ‘“Nancy Grossman - The 1960s” in the solo-artist booth section called Spotlight and introduced Nancy’s art to a new audience of significant collectors. I sold drawings and sculpture and museum curators discovered Nancy Grossman’s art and will include her in forthcoming exhibitions.’

Ulrich Fiedler, who took part in Collections, commented: ‘The fair has an in- credible mix of works, which is good for visitors to look at pieces in categories where they don’t usually collect. It was our first UK fair, and we have seen international visitors and have met a lot of people we haven’t seen before, which doesn’t happen in other fairs. We have had a lot of interest in our De Stijl furniture, and sold two chairs in the region of 100,000 EUR.’

Anne Pasternak, Director Brooklyn Museum said, ‘From a mini-retrospec- tive of Daniel Buren to an installation of Judy Chicago and ancient African clay goddess figurines, from medieval manuscripts to a bronze table from Pompeii, Frieze Masters galleries made an art fair into an opportunity for discovery, historic thinking and thoughtful creativity.’

Tim Marlow, Artistic Director, Royal Academy of Arts, said, ‘The calibre of artworks, galleries and visitors makes Frieze Masters a fair like no other. It feels like an intensive museum experience rather than a fundamentally com- mercial one.’