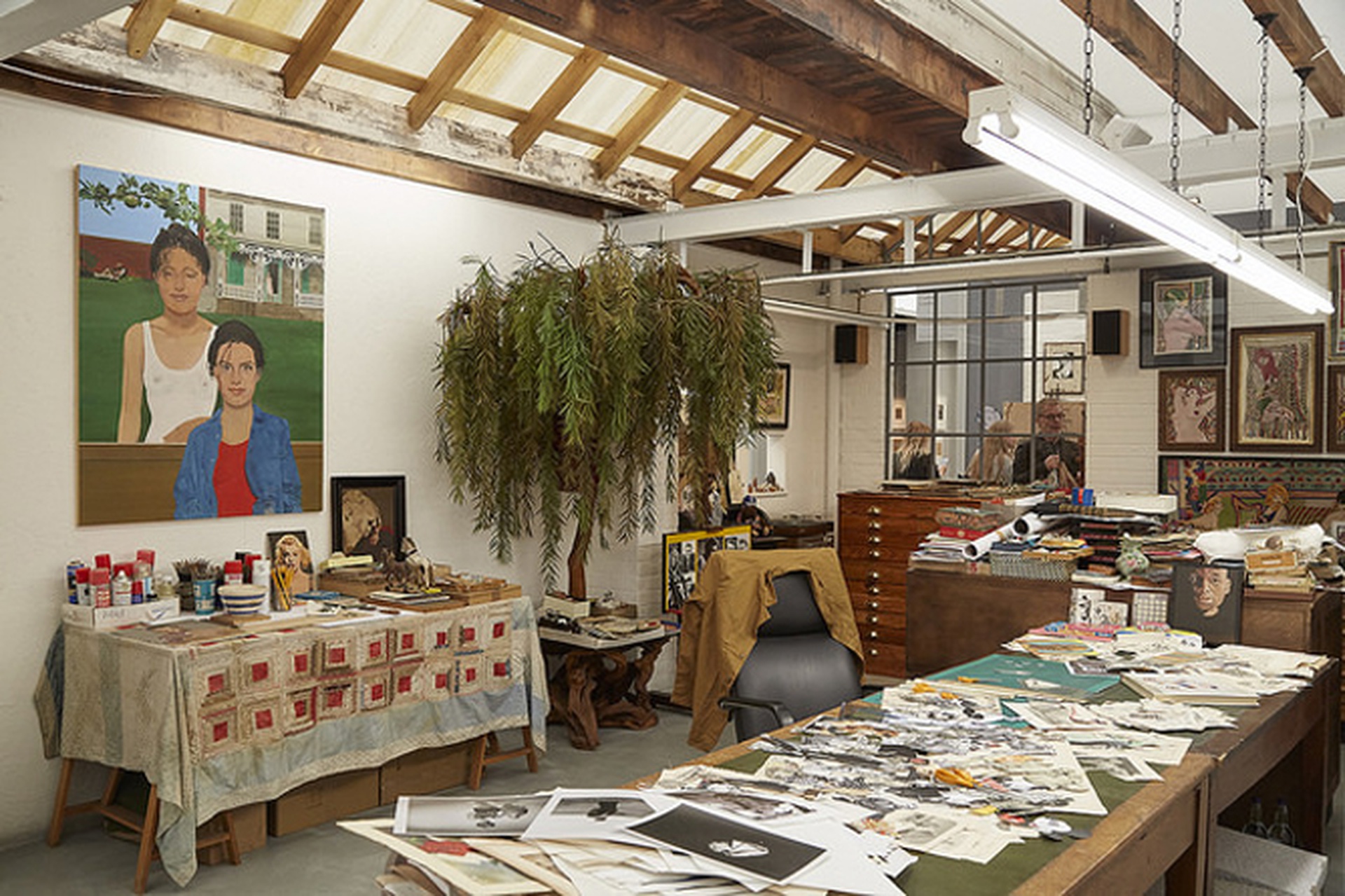 Frieze Masters returned to London’s Regent’s Park from 5–8 October for its sixth edition, bringing together more than 130 dealers of international renown. Featuring six thousand years of art history, the fair presented vibrant juxtapositions of period and genre, attracting a 10% increase in attendance on Preview Day and record VIP attendance throughout the fair. Building on Frieze Masters’ role as a significant platform for curatorial discovery and conversation, this year’s fair saw the growing attendance of museum leadership from around the world, with a record 230 groups visiting the fair. From Preview Day and throughout the week, strong sales were reported across collecting categories – from tribal art and Old Masters, to manuscripts and 20th-century works – including sales and interest from institutional and private collectors from around the world. Frieze Masters is supported by global lead partner Deutsche Bank for the sixth consecutive year, continuing a shared commitment to discovery and artistic excellence.

Victoria Siddall, Director, Frieze Fairs, commented: ‘The sixth edition of Frieze Masters cultivated a dynamic atmosphere with galleries presenting an exceptional quality of artwork alongside talks bringing together renowned artists such as Marina Abramovic, Isaac Julien, and Michael Craig-Martin. The presence of leading international experts, UK regional museum curators, and collectors from around the globe contributed to the growing success of the fair. I was delighted to see the enthusiastic response to the ambitiously curated stands and museum-quality works alongside a range of eclectic collections, with sales made at all levels and across categories to both new and established collectors.’

Galleries across the fair’s main and specially curated sections – Spotlight and Collections - enjoyed strong sales throughout the whole week, placing artworks across all levels of the market, and all collecting categories. Select highlights include: Dr Jörn Günther’s sale of a rare prayer book The De Croix Hours for EUR 3.5 million; Donald Ellis Gallery’s Kodak Madonna, a prehistoric Inuit ivory figure (asking price USD 1.2 million); and Johnny van Haeften’s painting by Gerard Terborch, The Card Players, in the region of GBP 2.5 million, within the first hours of the fair. Hauser & Wirth sold a work by Louise Bourgeois for USD 4,500,000 during an exceptionally busy second day. Stephen Friedman Gallery sold all of Ilona Keserü’s works on their stand, ranging up to EUR 95,000 in price; Kukje Gallery sold a 1975 work by Kwon Young Woo for USD 120,000; Pace sold works by Saul Steinberg in the range of USD 3,500 - 60,000; Waddington Custot sold four works by Peter Blake in the first hour of the fair, with prices ranging from GBP 22,000 - 290,000. Rupert Wace Ancient Art sold a range of works, from an Etruscan warrior for GBP 3,500 to a mummified falcon at GBP 30,000. In Spotlight Boers Li sold their signature red Huang Rui painting on Preview Day for USD 100,000 and sold on every day of the fair, paintings ranging USD 60,000 - 200,000; and Anne Mosserie-Marlio Galerie sold three paintings by Minoru Onoda ranging between USD 30,000 - 125,000, with both private and museum interest in the works. In CollectionsBenjamin Spademan Rare Books sold a book by Dubuffet for GBP 10,000; while Israel Goldman sold a number of prints and paintings by Kawanabe Kyosai, with prices ranging from GBP 2,600 - 11,000.

Continuing Frieze’s role as an environment for the sharing of expertise and curatorial discovery, Frieze Masters attracted leading cultural figures for a week of discussion and debate at the Talks programme curated by Tim Marlow (Royal Academy of Arts, London). The exceptional quality and discovery at the fair was supported through collaborations with eminent international curators, including Toby Kamps (Blaffer Art Museum, University of Houston), Clare Lilley (Yorkshire Sculpture Park), and Sir Norman Rosenthal (independent curator), who created sections dedicated to artistic discovery and connoisseurship. The fair also partnered with the National Gallery, London for the Art Fund Curators Programme, which brought together leading international experts and UK regional museum curators, including Taco Dibbits, Director of the Rijksmuseum, with participants joining him from Chrysler Museum of Art, Norfolk Virginia; Dulwich Picture Gallery, London; J. Paul Getty Museum, Los Angeles, among many others.

Directors, curators, and patron groups from a record 230 international museums and other arts organisations attended. Highlights from across the world include trustees and patrons groups from Crystal Bridges Museum of American Art, Louvre, Mauritshuis, Moderna Museet, Pinakothek der Moderne and Fine Arts Museums of San Francisco.

Dr. Eike Schmidt, Director, Gallerie degli Uffizi, commented: ‘Coming back to Frieze is a great opportunity to meet with colleagues and friends from the museum world, as well as gallerists, collectors and artists; and of course to see great art. Just the remarkable breadth of works at Frieze Masters and the combination between the stands makes it worthwhile coming each year.’

Taco Dibbits, Director, Rijksmuseum, commented: ‘Great art is always contemporary. At the fair, I was struck by the range of art works on show, from a ritual disc at Ariadne Galleries to an Egyptian shabti boat at Phoenix Ancient Art to a portrait of Hassan El Berberi at Colnaghi, which was very striking for its intensity, its modern composition and its subject matter: something you would not usually expect to see in this context. What struck me going around was the fact that objects from several thousand years BC coexisting with more recent artworks. The desire to care for these things is something very human and universal. I found that very inspiring’.

Luke Syson, Cantor Chairman, The Metropolitan Museum New York, said: ‘I come to Frieze Masters every year to be surprised - by the tremendous miscellany of the works of art on view, by the telling juxtapositions between modern and historic, by the contrasts and continuities. One always sees something unexpected - and even the more familiar can become interestingly strange and alluring.’

Max Hollein, Director and CEO of the Fine Arts Museums of San Francisco commented: ‘Despite (or maybe because of) looming Brexit, the city of London and its dynamic art scene and rich cultural offerings felt enormously vibrant, charged and responsive. Frieze is at the epicenter of this, not only as a great fair but also as a catalyst for activity all over London during its presentation. The heightened interest in activist, agenda-driven art, as a response to the current political climate, also helps resurrect important artistic positions of the recent past and it should be applauded that Frieze helps foster that with its thematic and focus driven special presentations.’

Brett Gorvy, Co-Founder of Lévy Gorvy (London, New York): ‘Frieze Masters drew in the top 100 collectors who have the most selective, discerning eye. Quality was key, which is why our aim was to curate a booth that shows important works in an intimate way. From a personal perspective, it has been fantastic to reconnect in London, and the comradery between exhibitors has been great.’

Johnny van Haeften, Managing Director,Johnny van Haeften(London): ‘There has been an incredible response this year, we had our best ever opening day at any fair. We have noted a good increase in footfall from collectors and museums at Frieze Masters. We are seeing real enthusiasm from visitors and definitely a marked increase in interest. I couldn’t praise it more highly.’

Donald Ellis Gallery (New York): ‘We are very happy to have sold fourteen works by Friday of the fair, with a highlight being the very oldest work from our exhibition: the Kodak Madonna, the most important prehistoric Inuit ivory figure dating from 500BC-200AD (asking price USD 1.2 million). The cultural diversity of Frieze Masters is a unique opportunity to show these important works that are less part of the mainstream canon. We have been working for years to put together our thematic presentation spanning 2000 years of Inuit art and are very happy with the positive reception. We have had some new buyers and other visitors at the fair showing much interest.’

Thaddaeus Ropac, Founding Director, Galerie Thaddaeus Ropac (London, Paris, Salzburg): ‘London confirmed itself as a quintessential city of the art market. The number and internationalities of the collectors at the opening day were beyond our expectations: Apart from the Europeans, many collectors came from the East and West coast of the USA, alongside an increasing number of Asian collectors. At Frieze Masters we have experienced a stronger interest from collectors who are particularly focusing on art from the height of the 20th century.’

Gerhard Kehlenbeck, Le Claire Kunst (Hamburg): ‘Frieze Masters offers the advantage of being able to show classical art in the midst of more contemporary booths, it brings us more attention. We have had new clients each year at Frieze from a younger, more contemporary crowd. We are also meeting clients from other regions: Japan, China and Russia for example. It was wonderful to sell two Kniep drawings on the first day of the fair and another work by Gonzalez. We are very satisfied with how much interest we have had.’

Salomon Lilian, of Salomon Lilian (Amsterdam): ‘It has been a really good experience for us this year. We sold two paintings on the first day, including a work by Jan Steen which was shown for the first time at Frieze Masters. It is especially great that Frieze has brought more museum curators from America and the Netherlands than we have seen before.’

Dr. Jörn Günther, Director, Dr. Jörn Günther Rare Books AG (Hamburg): ‘We had a great Frieze Masters 2017 and are extremely pleased with our sales, especially among private collectors. We also had some engaging visits from institutional curators from Europe and the United States. We are additionally encouraged by a young and interested public in London with many collectors stopping by to learn from our stand early in their collecting careers.’

Marc Glimcher, President, Pace (London): ‘The major take-away from Frieze this year is the incredible level of effort and care that dealers invested in their presentations. Of course the fair is fundamentally a commercial exercise - and our sales for Saul Steinberg works were strong - but galleries are now seeing fairs like Frieze as an opportunity to not just sell but to enlighten and delight. This phenomenon speaks well of both audiences and galleries at this moment in the market - which together are moving away from just transactions and embracing inspiration.’

Sam Fogg, Founder of Sam Fogg (London): ‘I’m very pleased. We have sold something every day, to new and old buyers. This year we weren’t afraid to be challenging, bringing some more unusual objects to Frieze Masters and have had a very positive reaction.’

Fiona Mai, Director of International Collections, Boers Li, (Beijing and New York): ‘Our experience at Frieze Masters has been excellent. It is a good place to meet buyers, and we are very pleased to have sold every day. The Spotlight section has been a great showcase for our presentation of important early works by the pioneering avant-garde Chinese artist, Huang Rui. His signature red painting was snapped up on the first day of the fair’.

Claire Brown, Director, Rupert Wace Ancient Art (London): ‘It has been very positive. The opening day was great, buzzy, lots of interesting and interested people and a healthy number of sales to UK, European, North American and Far Eastern collectors. As in previous years, our decision to concentrate on works with obvious appeal to the contemporary eye has paid off.’

Paul Hughes, Founder, Paul Hughes Fine Arts (London): ‘Frieze Masters lends itself very well to showing our unique pieces, this is one of the first times that museum quality Andean Pre-Colombian textiles have been shown at a fair in London. There is an educated eye coming through at Frieze Masters. People are confident in what they’re collecting. I sold two Andean ‘Feather Tunic’ pieces (dated around 800AD) on the first day of the fair to a collector who had never seen them before. Sir Norman Rosenthal, curator of the Collections section, has also made valuable introductions to museums.’

Frieze raised £19,060 for Save The Children in the cloakroom this year.