The seventh edition of Frieze Masters takes place from 5–7 October, with two Preview Days on Wednesday 3 October and Thursday 4 October

Featuring six millennia of art history from across the world, including a strong representation of Old Master galleries and Asian specialists this year; enhanced by curated sections showcasing extraordinary objects and pioneers of the avant-garde 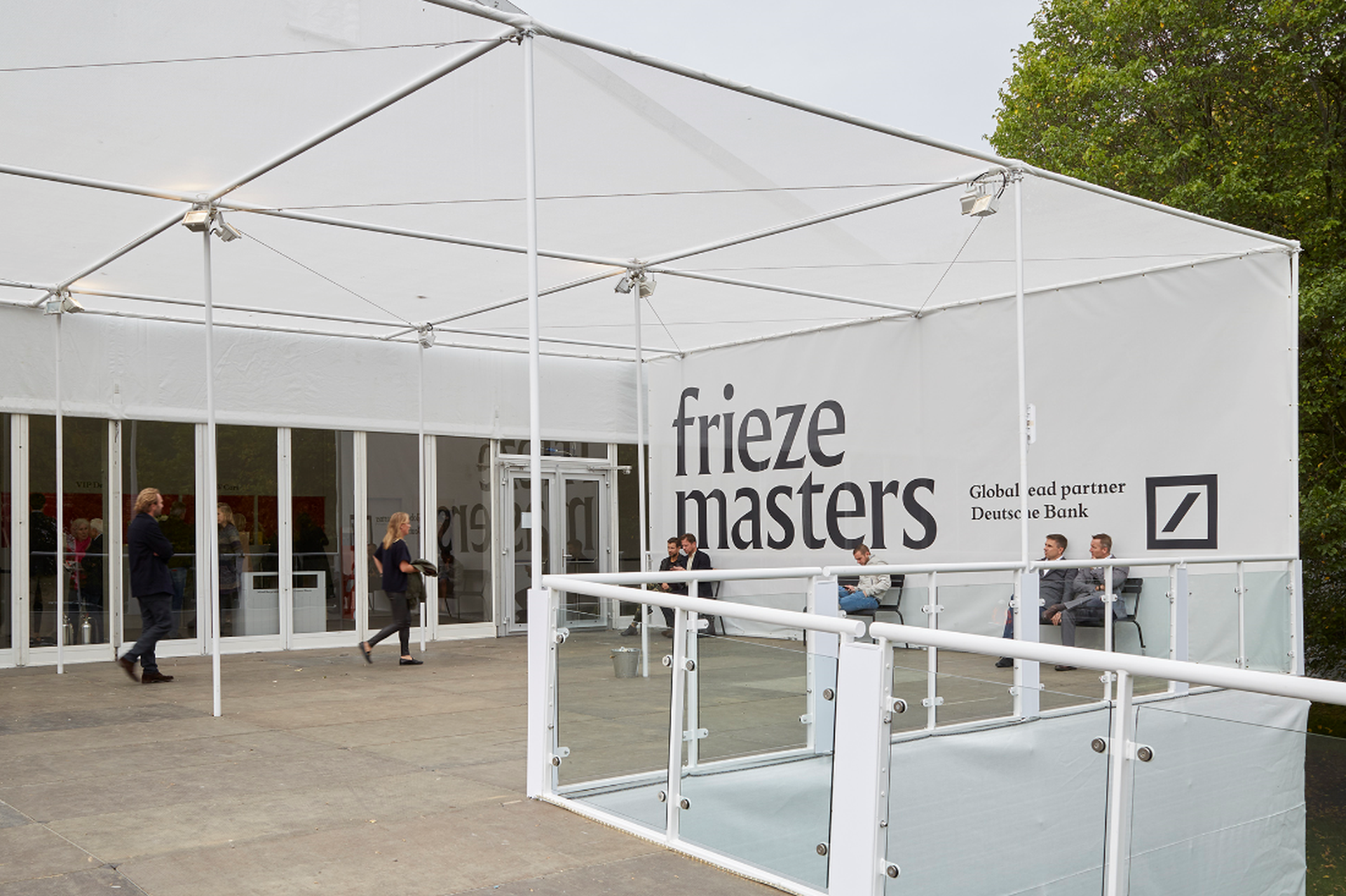 The seventh edition of Frieze Masters takes place from 5–7 October, with two Preview Days on Wednesday 3 October and Thursday 4 October

Featuring six millennia of art history from across the world, including a strong representation of Old Master galleries and Asian specialists this year; enhanced by curated sections showcasing extraordinary objects and pioneers of the avant-garde

Frieze Masters presents more than 130 international galleries showcasing an unrivalled range and quality of expertly vetted artwork, from Old Masters and antiquities, to tribal and 20th-century art. Eminent curators from worldclass institutions advise on gallery sections and programmes, opening up new perspectives and unexpected juxtapositions, in a contemporary environment designed by Annabelle Selldorf. Opening for the first time with a two-day Preview, Frieze Masters coincides with Frieze London and Frieze Sculpture in The Regent’s Park, together catalyzing the most significant week in London’s cultural calendar. Global lead partner Deutsche Bank supports Frieze Masters for the seventh consecutive year, continuing a shared commitment to discovery and artistic excellence.

The 2018 programme is shaped by international curators, who bring unique perspectives on art history and create an exceptional environment for quality and discovery. Toby Kamps (Blaffer Art Museum, University of Houston) will curate Spotlight, solo presentations by revolutionary figures of the avant-garde; alongside Sir Norman Rosenthal (independent curator), whose Collections section will feature a new array of specialist dealers with extraordinary art and objects. Tim Marlow (Royal Academy of Arts, London) returns to oversee the daily Frieze Masters Talks programme, this year featuring women international artists in conversation with museum directors and curators.

Victoria Siddall (Director, Frieze) said: ‘Following record attendance and significant sales at all levels last year, I’m really looking forward to the seventh edition of Frieze Masters. This fair is defined by its extraordinary quality and breath-taking diversity and the fair genuinely offers something for everyone, from the most knowledgeable connoisseurs to those who are new to historical art. We’re thrilled to be welcoming more galleries specializing in Old Master and Asian art to the fair this year, and as always the curated sections will be highly-edited places for discovery. The focus on women artists in our talks programme and in Frieze Masters Magazine feels timely and exciting and creates strong curatorial links to our programming at Frieze London.’

Museum-Grade Exhibitions of Works for Sale

Monographic exhibitions of major 20th-century figures will include:

Leading galleries will build on the fair’s reputation for ambitiously curated exhibitions, with highlights including:

From Old Masters to ancient Chinese masterpieces, the fair will showcase a diversity of extraordinary artworks and objects from across the world. Highlights include:

Curated by Toby Kamps (Blaffer Art Museum, University of Houston), the celebrated Spotlight section returns with a record 26 solo presentations by avantgarde 20th-century artists. Kamps said, ‘This year’s Spotlight section presents a global selection of 20th-century artists deserving of greater attention. Many are female, queer, or artists of color, and others chose eccentric media and approaches or worked in places cut off from major art centers.’ Highlights include, among others:

Curated by Sir Norman Rosenthal, the celebrated Collections section continues to bring new types of work to the fair and showcase extraordinary artworks and objects. Featuring seven galleries who are all new to the fair, highlights include, among others:

The Art Fund Curators Programme will return to the fair, bringing together museum professionals from the UK and internationally to explore how French, Italian and Spanish Old Master painting and sculpture collections can engage contemporary audiences. This is the third year of the programme, led by Gabriele Finaldi (Director, National Gallery, London) and Paola D’Agostino (Director, Museo Nazionale del Bargello). Further details will be announced in the coming months.

Taking place daily in the fair’s auditorium, Frieze Masters Talks is once again curated by Tim Marlow (Royal Academy of Arts, London). Marking the centenary of women’s suffrage in the UK, this year’s programme will feature women contemporary artists in conversation with museum curators and directors. Previous participants include Marina Abramovic, Lawrence Weiner and Luke Syson. The full programme for 2018 will be announced in the coming months.

To commemorate the centenary of women’s suffrage in the UK, the seventh edition of Frieze Masters Magazine is themed around the achievements of women artists throughout history. Edited by Jennifer Higgie (Editorial Director, Frieze), features include Griselda Pollock on Impressionism as the first gender-equal art movement in Western art history; Sheryl Reiss exploring the contributions of women art patrons; Claudia Calirman looking at trailblazing female Brazilian modernists; and Charmaine Nelson on the extraordinary life of 19thcentury artist Mary Edmonia Lewis, who was the first sculptor of both African American and Indigenous heritage to achieve international acclaim. Plus: in a newly launched section, museum directors from around the world highlight an important work in their collection by a woman artist. For the seventh year in a row, we have invited a cross-section of international artists to nominate a work of art from the past that has inspired them. Frieze Masters Magazine will be published in September.

Taking place on 2 October 2018 at the Royal Institution (London), the third edition of the Frieze Art & Architecture Conference looks at recent projects from architects around the world to consider how the form and function of cultural institutions are evolving, and presents long-term works by artists who are reassessing how and where we live. Speakers will include: Shigeru Ban, Jamie Fobert, Richard Rogers, Christopher Kulendran Thomas, Ellen van Loon, Kulapat Yantrasast and Andrea Zittel with more to be announced soon.

Opening on 4 July, Frieze Sculpture will return to The Regent’s Park for three months this summer, featuring works by 25 contemporary and modern artists presented by world-leading galleries. Selected and placed by Clare Lilley (Director of Programme, Yorkshire Sculpture Park), Frieze Sculpture will create an exceptional cultural attraction at the heart of the city, for Londoners and international visitors alike.

For the first time, Mtec, logistics partner for Frieze Sculpture, will cover the cost of installation for two emerging galleries, enabling them to participate in the display; and Frieze will also launch a new audio tour app in collaboration with mobile platform ARTimbarc. Also new for 2018, a Frieze Sculpture Family Trail will be produced and activated with family days in the park on 7 July, 28 July, 4 August and 25 August, led by the Royal Society of Sculptors. Frieze Sculpture opens in the English Gardens from 4 July to 7 October and is free to the public.

Coinciding with the contemporary fair Frieze London, as well as Frieze Sculpture, the two fairs form the heart of Frieze Week – an international cultural event in early October, which includes special programmes mounted by galleries and museums across London.

Frieze Week magazine returns offering a companion guide to the wealth of art and activity taking place at the fair and across the city during Frieze London and Masters.