The sixth edition of Frieze New York will be presented at Randall’s Island Park from May 5 – 7, 2017, with an invitation-only preview on Thursday May 4. 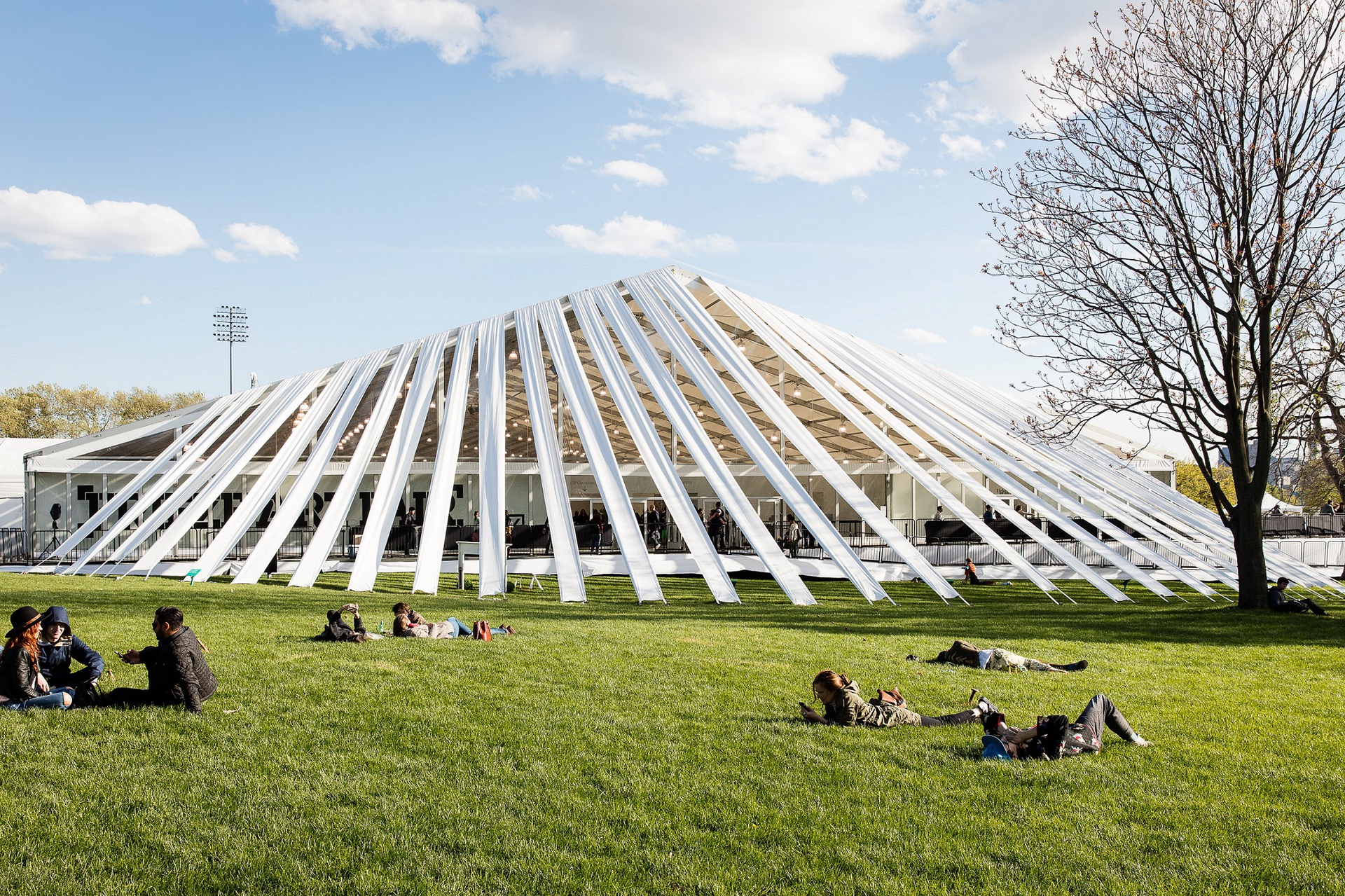 The sixth edition of Frieze New York will be presented at Randall’s Island Park from May 5 – 7, 2017, with an invitation-only preview on Thursday May 4.

The fair is mounted in a light-filled structure designed specifically for the presentation of works of art, providing an immersive experience that interweaves art, culture, nature and the urban landscape. This unique setting provides a space for visitors to enjoy pop-ups of the city’s best restaurants and stands presented by distinguished non-profit institutions, all overlooking the East River and the New York City skyline.

“Frieze New York continues to evolve and this year galleries are bringing presentations of greater breadth and quality than ever before, reflecting the diverse cultural interests of our audience.” noted Victoria Siddall (Director, Frieze Fairs). “The increased presence of 20th-century art at Frieze New York will create a great context for the many contemporary galleries in the fair and will open up fascinating dialogues. Visitors can look forward to discovering emerging talents from Guatemala to Japan, as well as Toby Kamps’s new perspective on Spotlight and Cecilia Alemani’s inspired artist commissions. All of this will be at the heart of an unmissable week of exhibitions and events across New York City.”

Frieze New York features three special platforms that ensure a diverse representation of artistic practices from around the globe:

Further information on key themes and presentations of Frieze New York 2017 follows below, and additional details will be announced over the coming months.

“Spotlight at Frieze New York brings together an extraordinary range of presentations, providing rare, intimate glimpses into the practices of leading figures of the 20th century as well as introductions to some of their underrecognized contemporaries from around the world,” noted Toby Kamps, curator of the Spotlight section. “The galleries joining Spotlight this year reveal foundational moments in art history through their presentations of influential artists of diverse practices, ranging from downtown denizens of New York such as Kenny Scharf and Jaime Davidovich, to purveyors of ‘hippie modernism’ like USCO (The Company of Us) and Gerd Stern and artists exploring forms of concrete poetry such as Dom Sylvester Houédard and Irma Blank. In addition to shedding light on the origins of key ideas at the root of contemporary practice, this year’s Spotlight section highlights work that has been long overlooked but gains resonance in the context of contemporary society.”

Leading Platform for Galleries Across the Americas: Frieze New York continues to grow as a platform for established and emerging galleries and artists in the U.S. and throughout the Americas. Many of New York’s most stimulating young galleries are participating in the fair this year, including returning exhibitors David Lewis and Rachel Uffner, along with new additions including Chapter NY, Bridget Donahue, and On Stellar Rays. From South America, Proyectos Ultravioleta (Guatemala City) – recipient of the 2016 Focus Stand Prize at Frieze London, Galeria Luisa Strina (São Paulo) and Walden (Buenos Aires) will make their fair debuts alongside returning galleries such as Fortes D’Aloia & Gabriel (São Paulo), Instituto de Visión (Bogotá), and Mendes Wood DM (São Paulo). With 19 galleries participating from California, including Los Angeles-based Blum & Poe, David Kordansky Gallery, and Kayne Griffin Corcoran, Frieze New York continues to strengthen its role as the preeminent fair in the United States— connecting major New York-based and international collectors and institutions with leading galleries and artists from across the Americas.

Engagement with Political and Social Issues: Following a year of upheaval and conflicts around the world, many galleries will showcase artists that grapple with pressing social and political issues of our time, ranging from legacies of colonialism, to the politics of feminism, to the dynamics of power and the dissemination of information in an increasingly digital world.

In the main section, Galerie Nathalie Obadia (Paris/Brussels) will bring a solo presentation by Andres Serrano, showing his emblematic photographic series “America”. Chi-Wen Gallery (Taipei) will move from Focus into the main section this year, with works by Chien-Chi Chang and Yin-Ju Chen, looking at history, memory, and human destruction. Galerie Lelong (New York) will concentrate on both historic and recent work by four artists— Alfredo Jaar, Nalini Malani, Hélio Oiticica, and Nancy Spero—looking at issues including media bias and misperception and the experiences of refugees. The Third Line (Dubai) will present a solo stand of work by Iranian artist Farhad Moshiri exploring the common ground between Iran and the West. Among the galleries exploring feminist issues, Salon 94 (New York) will feature works by three women artists— Huma Bhabha, Francesca DiMattio, and Katy Grannan—offering commentary on issues of race, gender, class and sexuality; and Galleri Magnus Karlsson (Stockholm) will present a thematic stand curated around the question of what it means for works of art to be designated as “female”.

Frieze Projects: Returning for the sixth year, Frieze Projects presents an innovative series of artist commissions and installations curated by Cecilia Alemani (High Line Art / Italian Pavilion 2017 Venice Biennale). This year’s program explores the ways in which the fair is experienced, with installations and performances that question the act of watching and being watched. The full program and participating artists will be announced in February.

Frieze Talks: Curated by Tom Eccles (Executive Director, Center for Curatorial Studies, Bard College, New York) for the sixth year, Frieze’s program of Talks will also return this year, providing visitors an opportunity to delve into a discourse on critical issues in the contemporary art world with some of today’s most significant artists, cultural figures, and thought-leaders.

The Reading Room: Returning for a second year, the Reading Room offers visitors the opportunity to meet writers, editors and artists in book signings and presentations, hosted by the world’s leading arts and lifestyle publications.

Frieze Week in New York: New York’s diverse community of galleries, institutions and arts organizations present some of their most ambitious projects during Frieze New York – forming a major moment in the international art world calendar. This year, highlights during Frieze Week (May 1–7) include: The Whitney Biennial at Whitney Museum of American Art, Louise Lawler at The Museum of Modern Art, Kaari Upson at the New Museum and Lygia Pape and Marisa Merz at The Met Breuer.

Frieze Week magazine: Following its launch in 2016, FriezeWeek magazine returns offering a companion guide to the wealth of art and activity taking place at the fair and across the city during Frieze New York, including complete fair gallery listings for browsing.

Frieze Education: The Frieze Education program reaches hundreds of students in the region annually, with onsite programming for school groups visiting Frieze New York, and the Frieze Teens program, which engages a group of teenagers throughout the year – exposing them to different careers within the contemporary art world through studio visits and professional workshops. The Frieze Teens lead student group tours of the fair and create a free interactive guide, The FriezeYoungPerson’sGuidetotheFair, a resource for all youth visiting Frieze New York. Frieze Education is supported by Deutsche Bank for the fifth consecutive year; for more information, a full release on the Frieze Teens program is available here.