Ghost Forest by Maya Lin to Open at Madison Square Park on May 10, 2021

Illuminating the Effects of Climate Change on Our Forests, New Visual Art Commission Creates Grove of Spectral Trees within Park’s Verdant Landscape, Building on Lin’s History of Environmentalism within her Artistic Practice 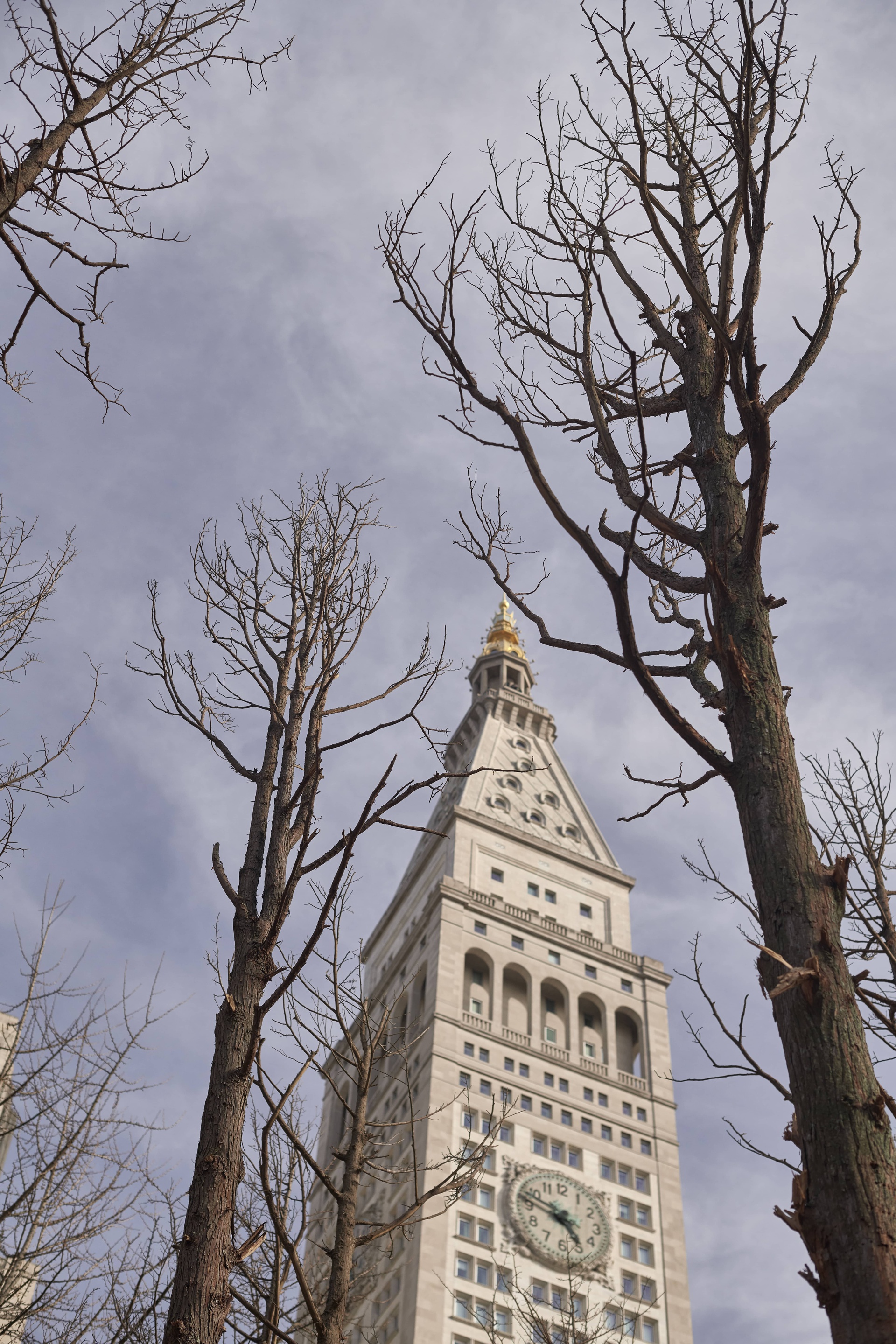 Image
Installation view of Ghost Forest during install at the Park. Photo by Andy Romer.

Illuminating the Effects of Climate Change on Our Forests, New Visual Art Commission Creates Grove of Spectral Trees within Park’s Verdant Landscape, Building on Lin’s History of Environmentalism within her Artistic Practice

As part of its public art commissioning program, Madison Square Park Conservancy opens today a major, site-specific installation by Maya Lin that brings into focus the ravages of climate change on woodlands around the world. Ghost Forest takes the form of a towering grove of spectral cedar trees, all sourced from the region and presented in sharp contrast to the park’s lush tree line. The installation builds on Lin’s practice of addressing species loss, habitat loss, and climate change within her work and serves as a call to action to the thousands of visitors who pass through the park daily. Originally planned for summer 2020, the exhibition is on view through November 14, 2021.

A series of virtual public events as well as in-person, socially distanced programs at the park complement the installation. These include a new soundscape composed by Lin in collaboration with the Cornell Lab of Ornithology that weaves together the calls and songs of some of the native animal species once common to Manhattan. Lectures on climate change with leading specialists are being held in collaboration with Fotografiska New York and meditative music performances, curated by Carnegie Hall and inspired by nature, are being within the installation throughout the summer. The project culminates in the fall with the planting of 1,000 native trees and shrubs in public natural area parks throughout each of New York City’s five boroughs, a partnership with Natural Areas Conservancy.

The Conservancy is also dedicating its annual public art symposium to exploring key issues raised by Ghost Forest. Held on June 4, the dynamic virtual event Greening Public Art is anchored by a keynote conversation with Maya Lin, Maria Rodale of the Rodale Institute, and Bill Ulfelder of The Nature Conservancy in New York, moderated by Andrew Revkin of Columbia University’s Earth Institute.

“Ghost Forest presents two striking alternatives within the context of Madison Square Park— the ashen trees standing in contrast to the vibrancy of the park,” said Brooke Kamin Rapaport, Deputy Director and Martin Friedman Chief Curator of Madison Square Park Conservancy. “Maya’s installation underscores the concept of transience and fragility in the natural world and stands as a grave reminder of the consequences of inaction to the climate crisis and poor land-use practices. Within a minimal visual language of austerity and starkness, Maya brings her role as an environmental activist and her vision as an artist to this work.”

Ghost Forest derives its name from the eponymous natural phenomenon: vast tracts of forestland that have died off due to extreme weather events related to climate change as well as sea-level rise and saltwater infiltration. To create the installation, Lin worked together with the Conservancy to source dead trees from a restoration project in the Pine Barrens in New Jersey, a vulnerable site that has suffered severe deprivation. Atlantic white cedars were once plentiful on the East Coast, but their population has dwindled to below 50,000 acres because of historic forestry practices as well as the threats posed from climate change. The 49 cedar trees installed in the park were all slated to be cleared as part of regeneration efforts. In the park, visitors will be able to wander through the trees, which are organically interspersed in a dense cluster and stand 40 to 45 feet high. The installation brings the dire reality of this phenomenon to audiences in a dense urban environment and encourages a consideration of nature-based practices that can protect and restore the ecosystem.

“As one of New York’s beloved public greenspaces, the Conservancy is committed to advancing environmental stewardship at the park through our mission and program. We are honored to be collaborating with Maya Lin to realize this powerful new commission that will heighten awareness of the realities of climate change and of urgent environmental issues that affect us all,” added the Conservancy’s Executive Director Keats Myer.

Maya Lin (American, b. 1959) is internationally recognized for her wide-ranging practice that encompasses large-scale environmental installations, architectural projects, and memorials, as well as intimate studio artworks. A committed environmentalist, Lin has dedicated a significant part of her practice to exploring issues related to climate change, including an ongoing web-based project What is Missing?, which raises awareness on habitat loss and biodiversity and emphasizes our ability to protect and restore species and significantly reduce carbon emissions through habitat preservation.

Lin has been the subject of numerous solo exhibitions at museums and galleries worldwide, with works in the permanent collections of the National Gallery of Art, The Metropolitan Museum of Art, The Museum of Modern Art, and the Nelson-Atkins Museum of Art, among others. She has also created permanent outdoor installations for public and private collections around the world including the American Embassy in Beijing, Brown University, California Academy of Sciences, Cleveland Public Library, Cornell Lab of Ornithology, Federal Courthouse in Miami, Princeton University, Rockefeller Foundation, Shantou University, Storm King Art Center, Wexner Center of the Arts, and Yale University. This spring, her design of the Neilson Library at Smith College opened. She is also re-launching the website for Whatismissing.org courtesy of a National Geographic grant.

Born in 1959 and based in New York and Colorado, Lin holds degrees from Yale and Yale School of Architecture. She is represented by Pace Gallery in New York.

Ghost Forest is complemented by a series of public programs that build upon the work’s implicit call to action and focus on nature-based solutions to climate change. Developed in partnership with a range of institutions—from Natural Areas Conservancy and Cornell Lab of Ornithology, to Carnegie Hall and Fotografiska New York—programs occur online and in-person throughout the duration of the installation at the park.

Further details on individual events follows below and can be found on the Conservancy website here.

Ongoing starting on May 11

Accessible on site via QR code, via Madison Square Park Conservancy’s website, and “What Is Missing?” website

A soundscape highlighting the sounds of some of the native species of animals that were once common to Manhattan is accessible to visitors on their mobile phones as they walk through the installation. The soundscape draws from the Macaulay Library sound archive of the Cornell Lab of Ornithology. The common and scientific name of each species is given and also includes readings of the animal names in the historic Southern Unami language from the Lenape Talking Dictionary website. For some species, a second name is also included in Munsee (Lunaapeew), the language spoken by the indigenous inhabitants of Manhattan. The soundscape also includes a land acknowledgment guided by The Lenape Center in New York City.

The Conservancy invites the public to share ideas on climate change by responding to such questions as: “How has climate change altered your daily life?”. Answers will be shared on a reflection board in the Park and on Conservancy’s social platforms.

In person at Fotografiska and livestream

Join photojournalist Gabriella Demczuk for an in-depth presentation on the artist’s experience documenting ghost forests across the United States. This talk is presented in collaboration with Fotografiska New York.

Music on the Green

On the Oval Lawn

Carnegie Hall curates a series of musical performances inspired by nature to provide visitors with a meditative experience of Maya Lin’s Ghost Forest. Each performance, part of the free Carnegie Hall Citywide series and featuring the Hall’s own Ensemble Connect, will be presented on the Oval Lawn from within the installation. Ticketing details to follow.

A special exhibition of Maya Lin’s planning model and preparatory drawings for Ghost Forest, as well as photographs of the installation process and the final project, will be organized by and on view at the photography museum Fotografiska New York, adjacent to Madison Square Park.

At public parks throughout NYC

Presented in collaboration with Fotografiska New York and in conjunction with Climate Week NYC, Maya Lin discusses the intersection of environmentalism and activism in her multifaceted artistic practice with Elizabeth Kolbert, New Yorker environmental writer and author of The Sixth Extinction (2014) and Under a White Sky (2021).

Presented in collaboration with Fotografiska New York and Natural Areas Conservancy, Maya Lin addresses issues of climate change and environmentalism through the lens of the built environment in a far-reaching conversation with Edwina von Gal, landscape architect and founder of Perfect Earth Project. The conversation will be moderated by Sarah Charlop-Powers, Executive Director of Natural Areas Conservancy.

This experimental documentary poetically explores our changing relationship to place and the natural world over time through its exploration of the Pine Barrens in New Jersey, the forest from which the trees from Ghost Forest were sourced. The documentary will be screened in conjunction with a live score by The Ruins of Friendship Orchestra and is presented in collaboration with Fotografiska New York. The program is introduced by Stephanie Lucas, Deputy Director of Operations and Horticulture, Madison Square Park Conservancy.

Since 2004, the Conservancy has become a leader in commissioning new works of public art, curating and presenting over 40 major site-specific installations and solo exhibitions through its art programming. Led by Brooke Kamin Rapaport, Deputy Director and Martin Friedman Chief Curator, the program invites leading artists to push the boundaries of their practice and create risk-taking new works that experiment with materiality, scale, and theme in response to the Park’s unique environment. The ambition of the commissioning program expands each year alongside the diverse range of innovative artists including Diana Al-Hadid, Tony Cragg, Abigail DeVille, Leonardo Drew, Iván Navarro, Martin Puryear, Arlene Shechet, Ursula von Rydingsvard, and Krzysztof Wodiczko.

Ghost Forest by Maya Lin to Open at Madison Square Park on May 10, 2021