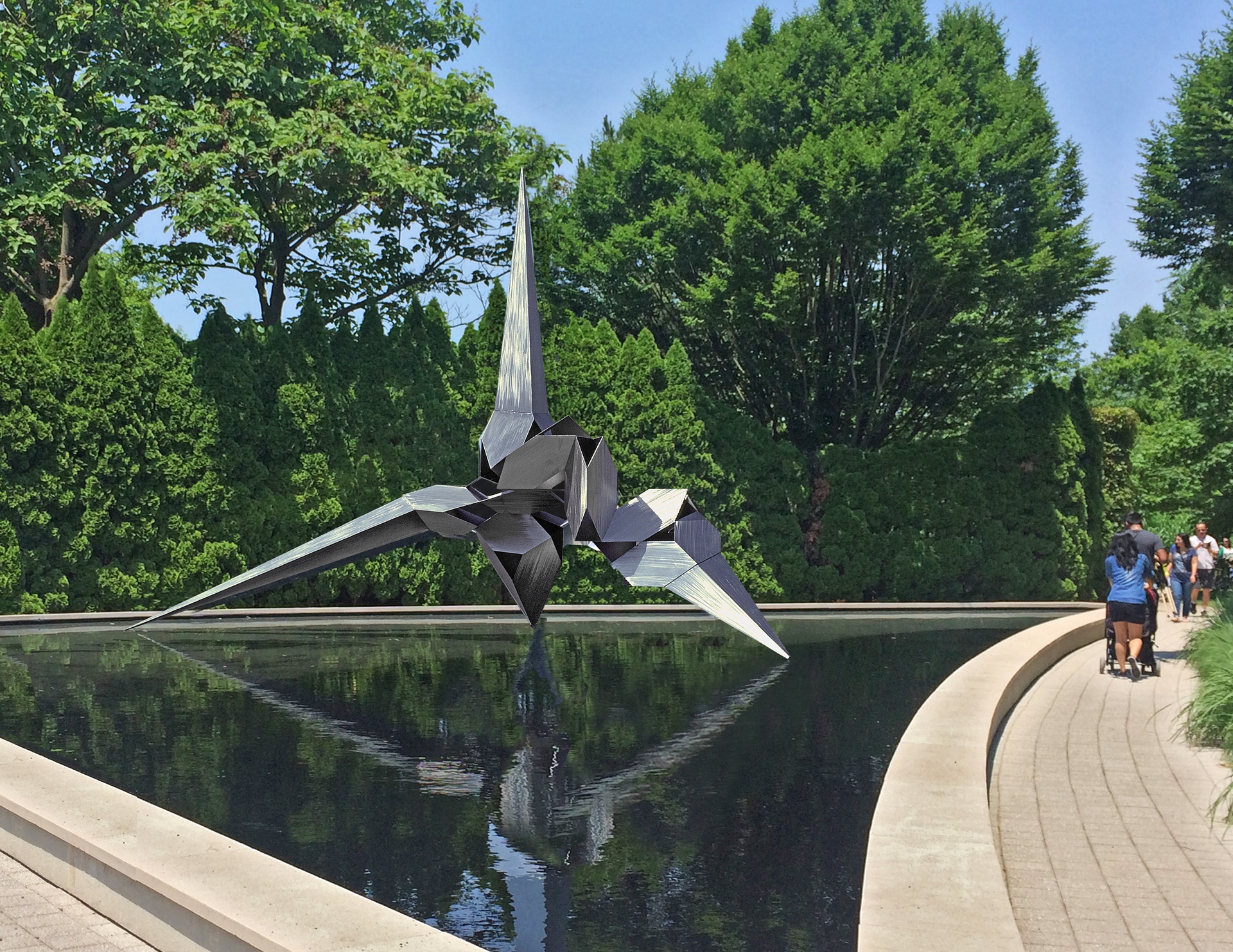 For six decades, sculptor Bruce Beasley has worked in a range of media to build complex, resonant arrangements from simple shapes that communicate the primacy of form and express the complexity of human emotion. This spring, Grounds For Sculpture (GFS) will present a major retrospective of the prolific pioneer, showcasing 62 of Beasley’s most important works, from his early iron assemblages featured in the influential exhibition, The Art of Assemblage (1961), at the Museum of Modern Art (MoMA) to his latest collages on canvas, a first for the sculptor. Bruce Beasley: Sixty Year Retrospective, 1960-2020 is the California-based artist’s first solo museum exhibition on the East Coast and will be on view in Grounds For Sculpture’s indoor galleries as well as in eight outdoor locations throughout the 42-acre landscaped park, from May 2, 2021 through January 9, 2022.

“Bruce Beasley is a fearless experimenter and one of the foremost sculptors on the West Coast, who has made significant and lasting contributions to the field for over sixty years,” said Gary Garrido Schneider, Executive Director of Grounds For Sculpture. “Through our work to advance the field of sculpture at large, we build strong relationships with contemporary practitioners. Beasley is a notable example of an artist who we have been fortunate to call a friend for decades, beginning with an early loan of Dorion, now a part of the permanent collection and a regular feature on our grounds. We are thrilled to now be celebrating his innovations across medium and form with this important retrospective.”

Beasley, whose work has been the subject of over 200 international exhibitions, has been influenced by Eduardo Chillida, but stands apart from his peers for his development of new working processes and sculptures in which material, shape, light, color, and movement achieve the emotional experience of form in space. While inventing and advancing new technologies, Beasley uses these tools only to advance his aesthetic explorations. His innovations in material science have included contributing to the development of the first studio-scale 3D printer and solving large-scale casting in acrylic, which has been adapted by the United States Navy for deep sea exploration. The artist is also a committed social advocate, founding the South Prescott Neighborhood Association to substantially impact community development in the historically neglected West Oakland area.

Anchoring Grounds For Sculpture’s presentation are Beasley’s earliest breakthrough works from the 1960s made of scrap iron, which caught the attention of MoMA, making Beasley one of the youngest artists to have work acquired for its collection. The retrospective also features the sculptor’s cast aluminum works of the 1970s; cast acrylic sculptures of the 1970s and 80s, for which he is renowned; and stainless steel and bronze works of the 1990s to the present day. Marking Beasley’s latest venture into two-dimensional media, the exhibition also features four monumental paper on canvas collages, the creation of which was aided by the use of virtual reality as a tool for drawing in space.

Highlighted works in the exhibition include:

“Throughout his career, Bruce Beasley has pushed the boundaries of sculpture making, uncovering new techniques and methodologies that achieve the visceral and interactive experiences of abstract form,” said Faith McClellan, Director of Exhibitions & Collections, who worked alongside exhibition curator Tom Moran. “This major retrospective both honors Beasley’s constant innovation and gives our visitors unique opportunities to see so many of the legendary artist’s works sited together and in nature.”

Bruce Beasley: Sixty Year Retrospective, 1960-2020 will be documented in a 180-page catalogue featuring a reflection by the artist; the lead essay by exhibition curator Tom Moran about Beasley’s processes, techniques, and place in art history; a conversation between the artist and Lawrence Weschler on the role of art and social activism and his robust community accomplishments in West Oakland; as well as Marlena Doktorczyk-Donohue, Director of the Bruce Beasley Foundation and Professor of Art History at Otis College of Art and Design, Los Angeles, who considers Beasley's work in the context of modern abstract art.

Bruce Beasley: Sixty Year Retrospective, 1960-2020 is supported by lead sponsor Bank of America, the Brooke Barrie Art Fund, and the following Exhibition Supporters: the Birney Family Foundation, the Gordon and Llura Gund Foundation; and Barbara Lawrence and Allen Laskin. Additional support is provided in part by the Atlantic Foundation; the Johnson Art and Education Foundation; the New Jersey State Council on the Arts, a partner agency of the National Endowment for the Arts; and the Geraldine R. Dodge Foundation. The catalogue is supported by Margaret and Herbert DuPont, and Lynn Glaser.

Bruce Beasley was born in Los Angeles in 1939. From 1959 to 1962, he studied sculpture at the University of California, Berkley whose faculty at the time included artists Jacques Schnier, Wilfred Zogbaum, and Peter Voulkos. Throughout his career, Beasley experimented with and continues to explore various sculptural mediums ranging from cast aluminum to Lucite to bronze to granite to wood. Beasley's substantial body of work has been featured in exhibitions and collections of leading institutions including the Museum of Modern Art, New York City, NY; Solomon R. Guggenheim Museum, New York City, NY; Musée National d’Art Moderne, Paris, France; Smithsonian American Art Museum, Washington, D.C.; Kunsthalle Mannheim, Mannheim, Germany; Los Angeles County Museum of Art, Los Angeles, California; San Francisco Museum of Modern Art, San Francisco, CA; and the National Art Museum of China, Beijing, China; to name a few. In 2005, the first retrospective exhibition of Beasley’s work was held at the Oakland Museum of California. In 2008, Beasley’s 17-by-17 foot stainless steel sculpture, Gathering of the Moons, was commissioned for the Beijing Olympic Games.

ABOUT GROUNDS FOR SCULPTURE

Grounds For Sculpture (GFS) is a 42-acre not-for-profit sculpture park, arboretum, and museum, founded by the late Seward Johnson. Featuring nearly 300 contemporary sculptures by renowned and emerging artists in a beckoning landscape, Grounds For Sculpture combines art and nature to surprise, inspire, and engage all visitors in the artist’s act of invention. In addition to its permanent collection, Grounds For Sculpture offers rotating special exhibitions in its six indoor galleries, rich educational programs, a robust schedule of performing arts, and dynamic family events. Located in Hamilton, New Jersey, Grounds For Sculpture is easily accessible from both the New York City and Philadelphia metropolitan areas and is now open year-round. For more information, visit groundsforsculpture.org.