High Museum of Art To Present “Sally Mann: A Thousand Crossings” This Fall

For more than 40 years, Sally Mann (American, b. 1951) has made experimental, elegiac and hauntingly beautiful photographs that explore the overarching themes of existence: memory, desire, death, the bonds of family and nature’s indifference to human endeavor. This fall, the High Museum of Art will present the first major survey of her work to travel internationally, “Sally Mann: A Thousand Crossings” (Oct. 19, 2019–Dec. 16, 2019). 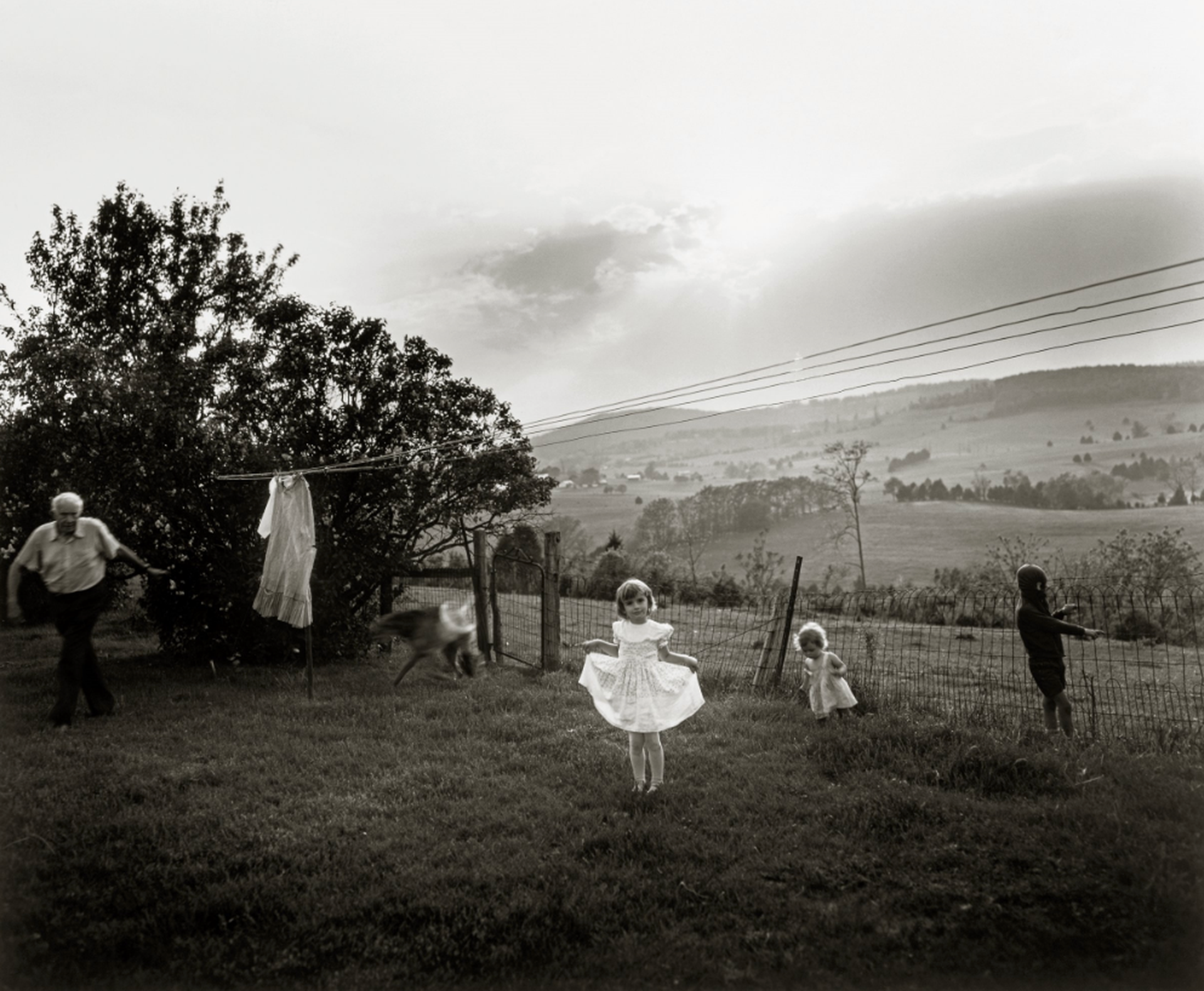 For more than 40 years, Sally Mann (American, b. 1951) has made experimental, elegiac and hauntingly beautiful photographs that explore the overarching themes of existence: memory, desire, death, the bonds of family and nature’s indifference to human endeavor. This fall, the High Museum of Art will present the first major survey of her work to travel internationally, “Sally Mann: A Thousand Crossings” (Oct. 19, 2019–Dec. 16, 2019).

Organized by the National Gallery of Art in Washington, D.C., and the Peabody Essex Museum, Salem, Massachusetts, the exhibition presents figure studies, landscapes and architectural views that are united by their common origin and inspiration in the American South. Using her deep love of her homeland and her knowledge of its historically fraught heritage, Mann asks powerful, provocative questions—about history, identity, race and religion—that reverberate across geographic and national boundaries.

The exhibition is co-curated by the High’s recently appointed Donald and Marilyn Keough Family Curator of Photography Sarah Kennel (previously with the Peabody Essex Museum), who developed the project with Sarah Greenough, senior curator of photographs at the National Gallery.

“I’m thrilled to launch my tenure at the High with ‘A Thousand Crossings,’ an exhibition that is not only dear to my heart, but also makes perfect sense for the museum, which awarded Sally Mann the first ‘Picturing the South’ commission in 1996. Mann’s drive to ask the big questions—about love, death, war, race and the fraught process of growing up—coupled with her ability to coax powerful emotional resonances from the materials of her art make her one of today’s most compelling artists.”

“With this exhibition we continue to recognize of the importance of Mann’s work, which explores themes that will strongly resonate with our regional audience but that also addresses universal human concerns,” said Rand Suffolk, the High’s Nancy and Holcombe T. Greene, Jr., director. “We are delighted to have Sarah on board to lead the project, and we look forward to bringing these powerful photographs to Atlanta.”

“Sally Mann: A Thousand Crossings” investigates how Mann’s relationship with the South—a place rich in literary and artistic traditions but troubled by history—has shaped her work. The exhibition brings together 109 photographs, including new and previously unpublished work, and is accompanied by a fully illustrated catalog that offers an in-depth exploration of the evolution of Mann’s art.

Organized into five sections—Family, The Land, Last Measure, Abide with Me and What Remains, the exhibition opens with works from the 1980s, when Mann began to photograph her three children at the family’s remote summer cabin on the Maury River near Lexington, Virginia. Made with an 8-x-10-inch view camera, the family pictures refute the stereotypes of childhood, offering instead unsettling visions of its complexity. Rooted in the experience of the natural environment surrounding the cabin—the Arcadian woodlands, rocky cliffs and languid rivers—these works convey the inextricable link between the family and their land and the sanctuary and freedom that it provided them.

The exhibition continues in The Land with photographs of the swamplands, fields and ruined estates Mann encountered as she traveled across Virginia, Georgia, Louisiana and Mississippi in the 1990s. Hoping to capture what she called the “radical light of the American South,” Mann made pictures in Virginia that glow with a tremulous light, while those made in Louisiana and Mississippi are more blasted and bleak. In these photographs, Mann also began to experiment with her process, employing antique lenses, high-contrast Ortho film and the 19th-century wet plate collodion process. The resulting photographic effects, including light flares, vignetting, blurs, streaks and scratches, serve as metaphors for the South as a site of memory, violence, ruin and rebirth.

Mann used these same techniques for her photographs of Civil War battlefields in the exhibition’s third section, Last Measure. These brooding and elusive pictures evoke the land as history’s graveyard, silently absorbing the blood and bones of the many thousands who perished in battles such as Antietam, Appomattox, Chancellorsville, Cold Harbor, Fredericksburg, Manassas, Spotsylvania and the Wilderness.

In the early 2000s, Mann continued to reflect on how slavery and segregation had left their mark on the landscape of Virginia and, in turn, shaped her own childhood. The fourth section, Abide with Me, explores these entwined histories. Two groups of photographs imagine the physical and spiritual pathways for African Americans in antebellum and post–Civil War Virginia: the rivers and swamps that were potential escape routes for enslaved people and the churches that promised safe harbor, communion and spiritual deliverance. This section also includes photographs of Virginia Carter, the African American woman who served as Mann’s primary caregiver. A defining and beloved presence in Mann’s life, Carter taught Mann about the profoundly complicated and charged nature of race relations in the South. The last component of this section is a group of pictures of African American men rendered in large prints (50 x 40 inches) made from collodion negatives. Representing the artist’s desire to reach across what she described as “the seemingly untraversable chasm of race in the American South,” these powerful photographs explore Mann’s own position in relation to the region’s fraught racial history.

The final section of the exhibition, What Remains, explores themes of time, transformation and death through photographs of Mann and her family. Her enduring fascination with decay and the body’s vulnerability to the ravages of time is evident in a series of spectral portraits of her children’s faces and intimate photographs detailing the changing body of her husband, Larry, who suffers from muscular dystrophy. The exhibition closes with several riveting self-portraits Mann made in the wake of an accident. Here, her links to Southern literature and her preoccupation with decay are in full evidence: the pitted, scratched, ravaged and cloudy surfaces of the prints function as analogues for the body’s corrosion and death. The impression of the series as a whole is of an artist confronting her own mortality with composure and conviction.

“Sally Mann: A Thousand Crossings” will be presented in the High’s Anne Cox Chambers Wing.

Born in 1951 in Lexington, Virginia, Mann continues to live and work in Rockbridge County. She developed her first roll of film in 1969 and began to work as a professional photographer in 1972. She attended Bennington College, Vermont, and graduated in 1974 with a Bachelor of Arts in literature from Hollins College, Roanoke, Virginia, where she earned a Master of Arts in creative writing the following year. She has exhibited widely and published her photographs in the books “Second Sight: The Photographs of Sally Mann” (1983), “Sweet Silent Thought: Platinum Prints by Sally Mann” (1987), “At Twelve: Portraits of Young Women” (1988), “Immediate Family” (1992), “Still Time” (1994), “Mother Land: Recent Landscapes of Georgia and Virginia” (1997), “What Remains” (2003), “Deep South” (2005), “Sally Mann: Photographs and Poetry” (2005), “Proud Flesh” (2009), “Sally Mann: The Flesh and the Spirit” (2010) and “Remembered Light: Cy Twombly in Lexington” (2016). Mann’s bestselling memoir, “Hold Still: A Memoir with Photographs” (2015), was a finalist for the National Book Award. In 1996, Mann was selected to inaugurate the High’s “Picturing the South” photography series, a distinctive initiative that creates new bodies of work inspired by the American South for the Museum’s collection. She has received numerous other honors as well as grants from the National Endowment for the Arts, the National Endowment for the Humanities and the Guggenheim Foundation. In 2011 Mann delivered the prestigious William E. Massey Sr. Lectures in the History of American Civilization at Harvard University.

Published by the National Gallery of Art, Washington, and the Peabody Essex Museum, Salem, Massachusetts, in association with Abrams, this richly illustrated monograph constitutes an indepth exploration of the evolution of Mann’s art through its five sections: Family, The Land, Last Measure, Abide with Me and What Remains. Plate sections are enriched by the inclusion of quotations from Mann herself and from her most beloved authors. Essays by curators Sarah Greenough and Sarah Kennel analyze Mann’s photographic development in concert with her literary interests and Mann’s family photographs, respectively. In their valuable contributions, Hilton Als, New Yorker staff writer and recipient of the 2017 Pulitzer Prize for Criticism; Malcolm Daniel, Gus and Lyndall Wortham Curator of Photography, The Museum of Fine Arts, Houston; and Drew Gilpin Faust, president and Lincoln Professor of History, Harvard University, explore literary and photographic responses to racism in the South, Mann’s debt to 19thcentury photographers and techniques, and the landscape as repository of cultural and personal memory. Featuring 230 color illustrations, the 332-page catalog will be available at the High Museum Shop.

About the High Museum of Art Located in the heart of Atlanta, Georgia, the High Museum of Art connects with audiences from across the Southeast and around the world through its distinguished collection, dynamic schedule of special exhibitions and engaging community-focused programs. Housed within facilities designed by Pritzker Prize–winning architects Richard Meier and Renzo Piano, the High features a collection of more than 17,000 works of art, including an extensive anthology of 19th- and 20th-century American fine and decorative arts; major holdings of photography and folk and self-taught work, especially that of artists from the American South; burgeoning collections of modern and contemporary art, including paintings, sculpture, new media and design; a growing collection of African art, with work dating from pre-history through the present; and significant holdings of European paintings and works on paper. The High is dedicated to reflecting the diversity of its communities and offering a variety of exhibitions and educational programs that engage visitors with the world of art, the lives of artists and the creative process. For more information about the High, visit www.high.org.

High Museum of Art To Present “Sally Mann: A Thousand Crossings” This Fall